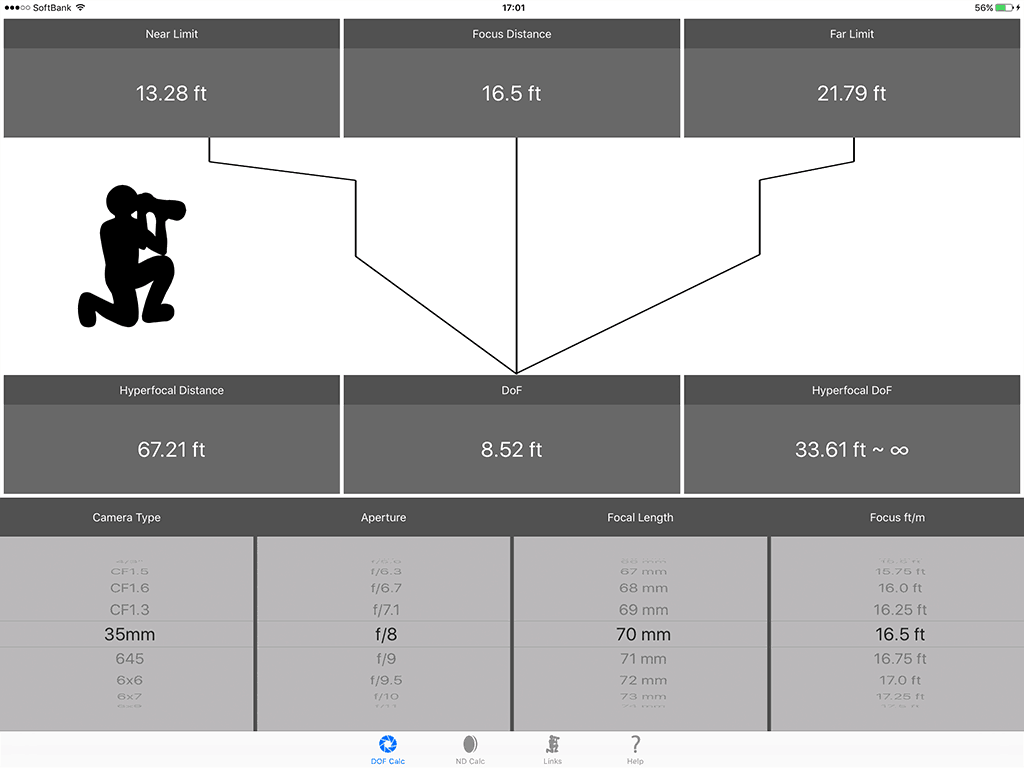 Today I really just have an announcement for all of the listeners that use our MBP Companion iPhone App, which is currently showing a message about not being supported by the imminent new release of iOS, which is version 11.

You may recall that I mentioned a few weeks ago, that I had started studying how to develop iOS applications, because the app that someone kindly made for us as a companion for the Podcast a number of years ago, will no longer be supported by iOS 11, which will be released very soon now. When opened my app is showing a message saying that people should contact the developer, and a number of people have done just that.

To be totally honest, there were a number of things about the old app that didn’t work quite as I’d like, and some parts of it had broken over the years, but I had paid off the developer of the app some years ago, and was on my own with regards to getting it updated. I asked around for some quotes to get the updates done professionally, but all were way too expensive for our humble means, so I decided to tackle this myself. 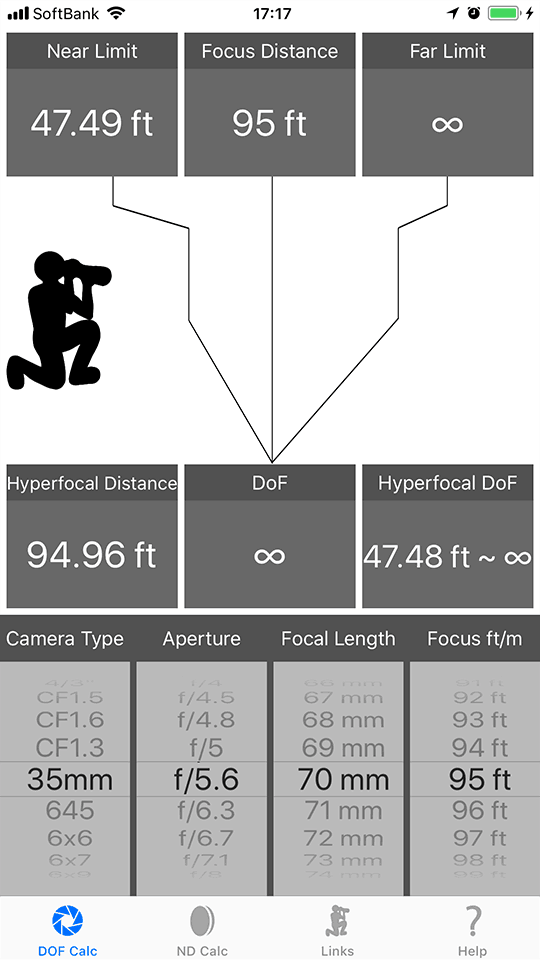 Well, it soon became obvious that it was going to be easier to just rebuild my app from scratch. The original code was great back in its day, but so much has changed, it really didn’t seem worth trying to rescue it. Plus, I really wanted to make the new version of our app universal, so that it ran on both the iPhone and the iPad, so starting afresh was just easier.

Anyway, for the last couple of weeks, I’ve spent literally every waking minute developing a new app. It’s not finished yet, but I’ve rebuilt the most used part of our old app, the Depth of Field Calculator, and it’s working great!

I’m including a screenshot, to show you how far I’ve got, although I still have work to do. All of the core functionality is now in place though. Instead of tapping and typing the focus distance and focal length, or opening a new window to change the aperture, you can now access these three settings with your thumb by way of the dials at the bottom of the screen.

I’ve also done away with the camera selection process because all that really matters is the sensor size, so that’s what you select on the left-most dial now.

To switch between meters and feet, you just tap the Focus ft/m label, and I’ve programmed it so that as you focus closer you automatically switch to centimeters and inches. The DoF display goes all the way down to 0.1 μm, and you can select an aperture as wide as f/0.7, because believe it or not, there are some rare lenses that wide. Also, like the old app, if you tap on the Hyperfocal Distance label, the app will change the focus distance to the Hyperfocal Distance, using your aperture and focal length settings, as I always found that really useful.

I’m also really happy to have been able to make the new app universal, so it runs on all sizes of iPad as well, and it now also switches gracefully to landscape orientation when you rotate the device. These are all things that I really wanted to implement, so this is great! 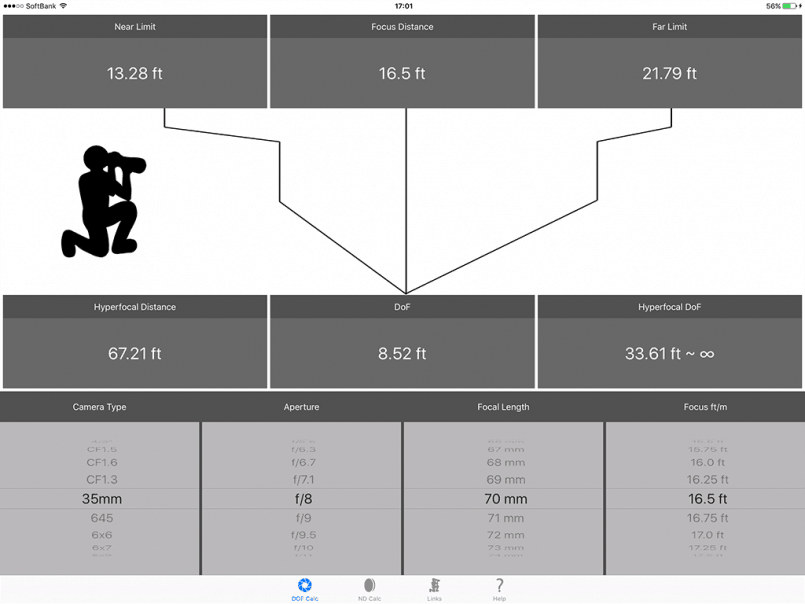 I’ve not included a replacement for the old Podcast player, because the iOS has a perfectly good player included, and there are are other great alternatives available now too, so it doesn’t really warrant the time it would take me to build that. I have included a links screen though, in which I’ll include a link to the Podcast, which will hopefully open in the Podcasts app, at least after a couple of clicks. 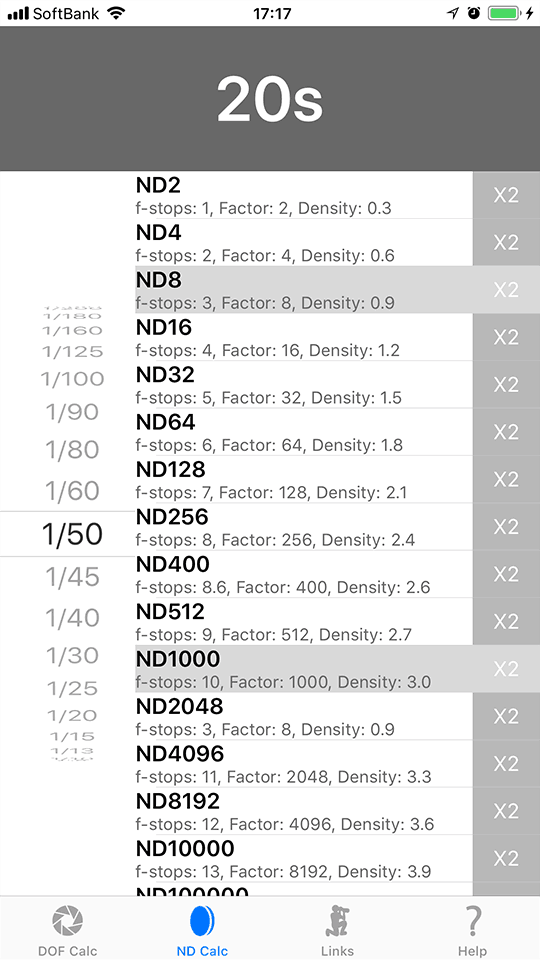 The other new thing that I really wanted to develop, and I’ve just about finished, is a Neutral Density Calculator, to calculate your new shutter speed as you attach ND filters to your lens. I figured out the math behind this a few years ago, so I was pretty confident I could do this, and I now have the Interface just about build, as you can see in this screenshot.

Don’t check the calculated time displayed, as I’ve literally just figured out how to populate the cells with the ND filter information, and haven’t yet programmed the part that takes the selected values and updates the shutter speed with them. That is my next job this evening as soon as I’ve released this podcast.

Now that I’ve learned this much about iOS development, I will be able to continue to develop and improve the app in the future, but for now, I’m really pleased that I’ve been able to build my own Depth of Field and ND Calculators. These are the two things that I use the most, so I hope this will be valuable to people once I can get it available on the App Store.

For those of you that have a copy of our old app, I’m going to try to make the version I’m working on now a version 2, and make it available as a free update, but I have not yet looked into what I need to do to make that happen. If it’s at all possible, I’ll do that.

Of course, it could also be that my coding is so bad that Apple completely rejects my new app, but I believe I’ve developed enough skills to be able to solve any issues that they may point out. I don’t have an ETA for when the app will be available, but I think I’ll have finished the development within the next week, and start the process of getting the app accepted from there.

So, sorry that I couldn’t do a regular podcast this week. I wanted to put something out there, so explaining what’s taking all of my time seemed like my only option at this point. Plus, I wanted to let users of our current app know that I am working on a replacement! Once it’s available, I’ll do a video to show you how to use it.

Get this post's short-link:
← What Makes a Photograph or Print Fine Art? (Podcast 589) What Focal Length is Closest to Human Eyesight? (Podcast 591) →
Become a Patron