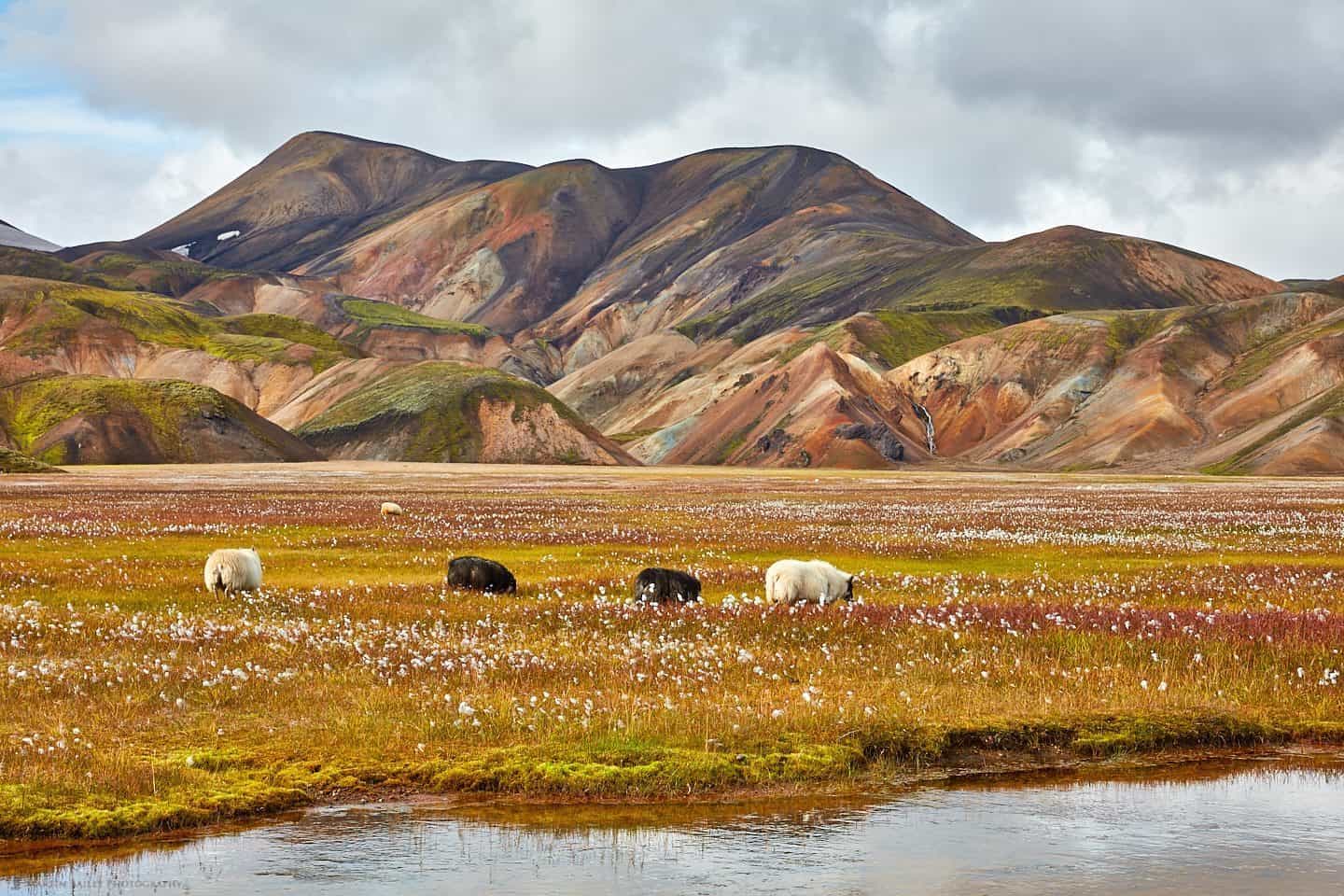 What Focal Length is Closest to Human Eyesight? (Podcast 591)

Following a recent question, today we’re going to explore how we see and how we perceive a scene, in relation to the focal length numbers we are familiar with from our camera lenses.

Before we start, I’d like to apologize for skipping last week’s episode. I’m still working heavily on our iOS app update, and although it’s nearly finished, it’s taken up pretty much all of my time over the last few weeks. As there are people using the old version, finding that it doesn’t work on iOS 11, I have been prioritizing completing the app pretty highly.

With that, this is going to be a relatively short episode, but the subject of today’s post has been playing on my mind following a listener question, so I figured I’d get this out before starting a new week working on the app again.

So, I was asked which focal length is closest to the human eye, 50mm, 24mm or something else. This got me thinking because the question itself needs a little bit of scrutiny. Firstly, most of us have two eyes, not one like our cameras, and our brains do an amazing job of stitching the two images together to provide us with a somewhat panoramic if not cinematic view of the world.

There’s a lot of talk about this on the web, but there is one article that I’d like to point you to as what I consider to be probably one of the best articles, as that by Allan Weitz over on the B&H website here. Allan gives some great information on this subject in his post, and on the focal length, he states that we see the world with a focal length of around 22mm.

Now, while I have no reason to disagree with this as a biological equivalent based on how we see the world, I can’t help thinking about what we are actually trying to understand in the first place. The common number that also gets kicked around is that a 50mm lens is the “standard” focal length. This is the focal length of lenses that used to come with many of the early cameras and is certainly a nice focal length to work with, but it’s a little long compared to how we biologically perceive the world. As I’ll explain though, it’s actually a fair bit wider than what feels most natural from a perspective point of view, if you consider the relationship between the elements of a scene.

Let’s consider the fact that the relationship between the various elements in a scene changes as we change our distance to the subject and the focal length. The closer we are to our main subject and the wider our focal length is, the more distorted the scene becomes. As we move back and use longer focal lengths, i.e. zoom in, we start to see elements become compressed, and appear closer to each other than they really are.

I talked about this at length in my post The Effect of Subject Distance and Focal Length on Perspective, which is actually where I received the question that prompted today’s episode. If you look at the 24mm example image from that post you’ll be able to see that when shooting at 24mm, which is the focal length that I started my tests at, the distant objects look very far away. These are just test shots, nothing to write home about, here (below) is the 24mm shot to save clicking around. 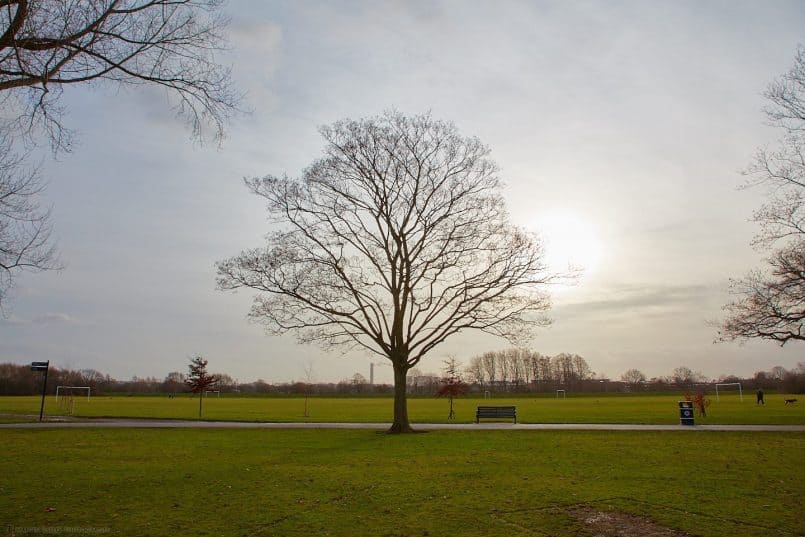 Tree and Power Station at 24mm

At 24mm, the power station in the distance is hardly noticeable, yet, my recollection from my childhood as I grew up looking at this power station in the distance, is of something much larger than this. Of course, our brains actually zoom in on elements of interest and isolate them to the point that we can view them full screen in our mind, but we’ll talk more about this shortly.

What I decided to do, and this was the advice that I gave Héctor in answer to his question about this, is to simply raise my camera to my eye, and adjust the zoom until the elements in the scene looked exactly the same size as the actual scene before my eyes. This takes a few adjustments, but I found that on my full frame sensor Canon 5Ds R camera with the Canon 24-105mm lens attached, 68mm was the closest perspective to how I actually see.

Although I agree that biologically 22mm is closer to how we see the world with our eyes and brains, if the relationship between the elements in the scene is important to you, you may want to consider doing similar tests with your own camera and keeping the results in mind as you work.

Here is the 70mm example photo from my earlier post on perspective, and as you can see, the power station is much larger in this shot and much closer, much more like what I remember from my childhood. Despite the tree being exactly the same size in the frame as it is at 24mm because I’d moved further away, the power station is much larger in relation to the tree at 70mm. 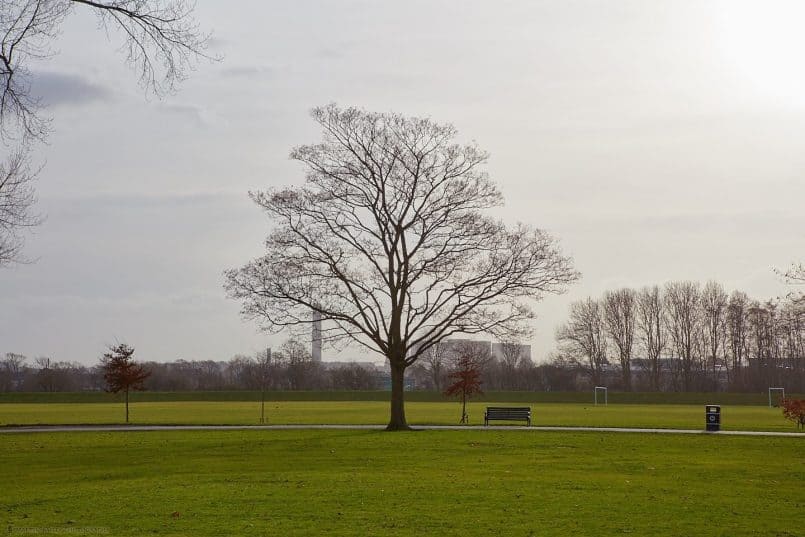 Tree and Power Station at 70mm

Based on this, I’d like to propose that before you latch onto focal lengths such as 22, 24 or 50mm as the closest focal length to the human eye, I strongly suggest that you think first about what you actually want to capture in your image.

How we see and how we perceive the world, are two very different things. A 24mm focal length might be great for photography when you want to show approximately the amount of the scene that we can see with our peripheral vision, but this is not what we are seeing with our brains. Our brain is constantly zooming in on the various elements of the scene before us, exploring details at much closer range than we can actually see them, and as we’ve seen the perspective and relationship between the elements of the scene is totally off at 24mm.

This is why I’ve always been a proponent of photographing what I call “intimate” landscapes, shot with longer focal lengths. I’ll shoot landscapes at super wide focal lengths, and I really enjoy these sorts of photographs too, but they are different and don’t convey the scene with the beauty of the individual elements that are for me at least, what usually excites me the most about a scene.

I’ve selected a series of images from Landmannalaugar in Iceland, to further explain my point. In this first example was shot at 21mm, very close to how we are supposed to see the world biologically, the stream in the foreground is portrayed much larger than it actually is in relation to the rest of the valley because I was close to the stream looking down on it. Also, the mountains in the distance are full of detail that I want to capture, but it’s kind of lost in this photograph, although they do provide a nice backdrop. Also, the sheep are lost in this scene at 21mm. 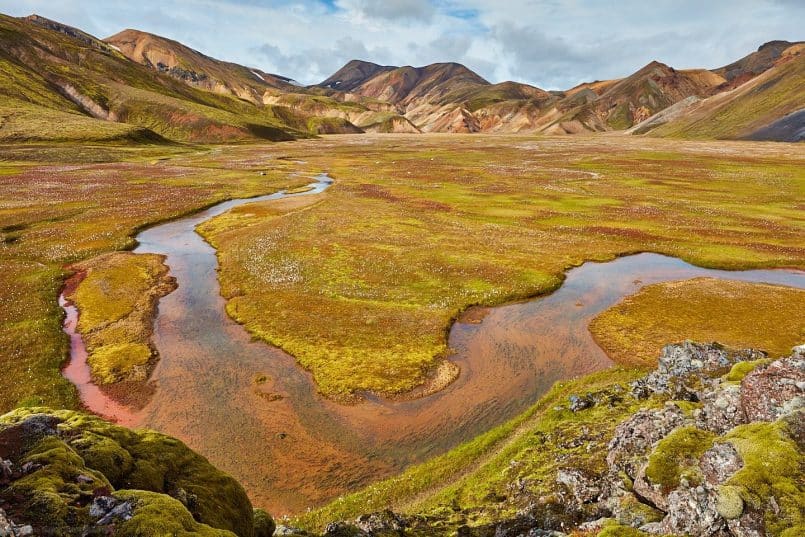 Having walked down from the higher location of the previous photo, I shot this next image (below) at 70mm, which to me is a much more natural perspective of the valley. The sheep in the foreground here were not in the previous image, but the one a little further into the scene is in pretty much the same location as the previous image, but we can see him now. This photograph also enables us to explore the beauty of the rhyolite mountains as well. 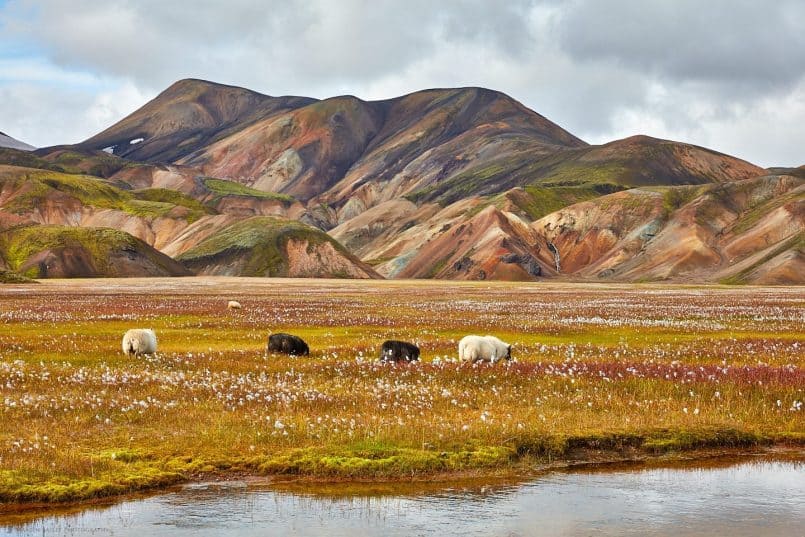 More importantly, in the context of this post, the image feels much more natural to look at than the previous 21mm wide-angle photograph. Sure, the field of view is much narrower than we would see with our eyes while standing in the valley, but if we accept that this is a framed segment of a larger scene, the elements within the photograph look much more natural to me.

As a photograph, I actually prefer the next image (below) which I shot at 135mm, as this enables me to really explore the details in the mountains, and this is how I recall the mountains from the valley. My mind’s eye is constantly zooming in on details, and forming a patchwork from the various elements of the scene that excite me. 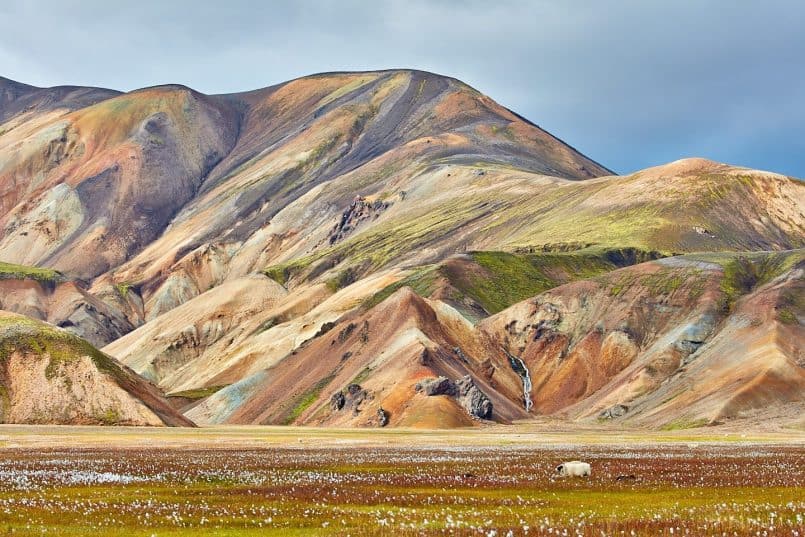 Of course, that is where we come back to the 21mm photograph, which is to me the patchwork. It’s a representation of the scene, as initially captured biologically with our eyes. The following 70mm image is a much more natural perspective to view, and the 135mm photo is much closer to how I remember the mountains.

I won’t try to tell you that any of these three representations is more correct. All three of these images are in my Iceland portfolio for what they are, and I believe that is a great way to capture a location. We can always create a set like this to show the wider scene, and then also show the details to satisfy the viewer’s curiosity. After all, this is what we are really doing with our eyes and brains as we approach any given scene in real life.

To quickly summarize my conclusion here, I don’t really think you can put a number of which focal length is most like how we see a scene with the human eye. I think it would be much better to do a test to find out focal length that your camera shoots the most natural perspective at, which for me was 68mm for a full frame DSLR. For a 1.6X crop factor camera, you’d perhaps find that to be around 42mm. But also keep in mind that we see much more than this with our peripheral vision and our brains.

At the end of the day though, although I seem to enjoy shooting around that I considered to be the most natural perspective of around 70mm, I can’t say that I’ve really considered it in this way in the field. I shoot much more by instinct and generally frame up a shot based more on what is in the scene and where I can be in relation to that scene. If I need to spread elements out, I try to get close and go wide. If I want to compact elements, I try to get some distance and go long. As is generally the case, it’s much more about the photograph than the theory.

[UPDATE Oct 3, 2017: Above I said that 42mm would probably be closer to the natural perspective for a 1.6X crop factor camera, but that’s probably incorrect. Crop factor cameras are only cropping away the edges of the scene, not changing the perspective, so it may well also be around 70mm, but you’d get a smaller slice of the world. I don’t have a crop factor camera to try. Please check for yourself by raising the camera to your eye and adjusting the zoom until the image you see through the viewfinder is the same size as what you see with your eyes.]

My  “The Effect of Subject Distance and Focal Length on Perspective” article: https://mbp.ac/568