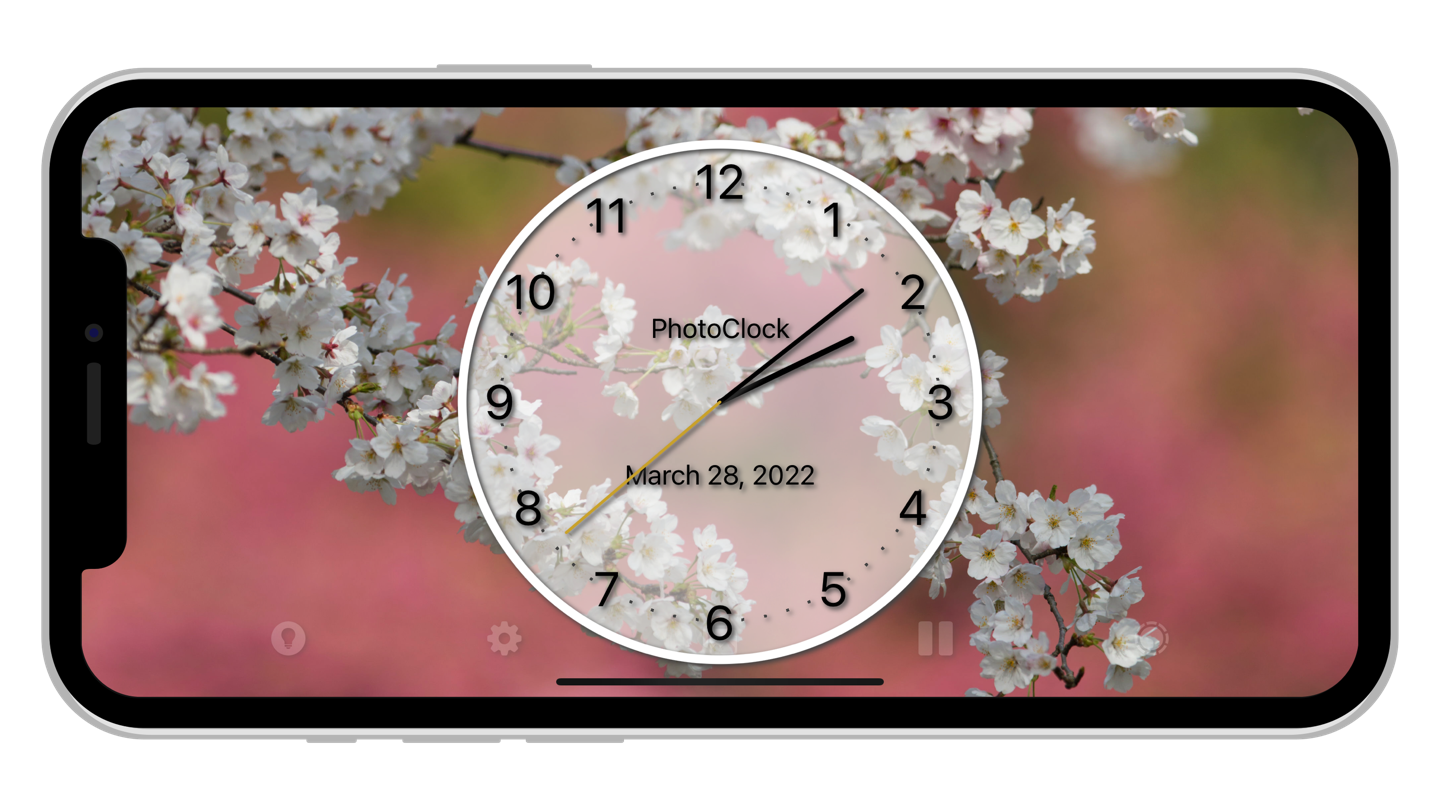 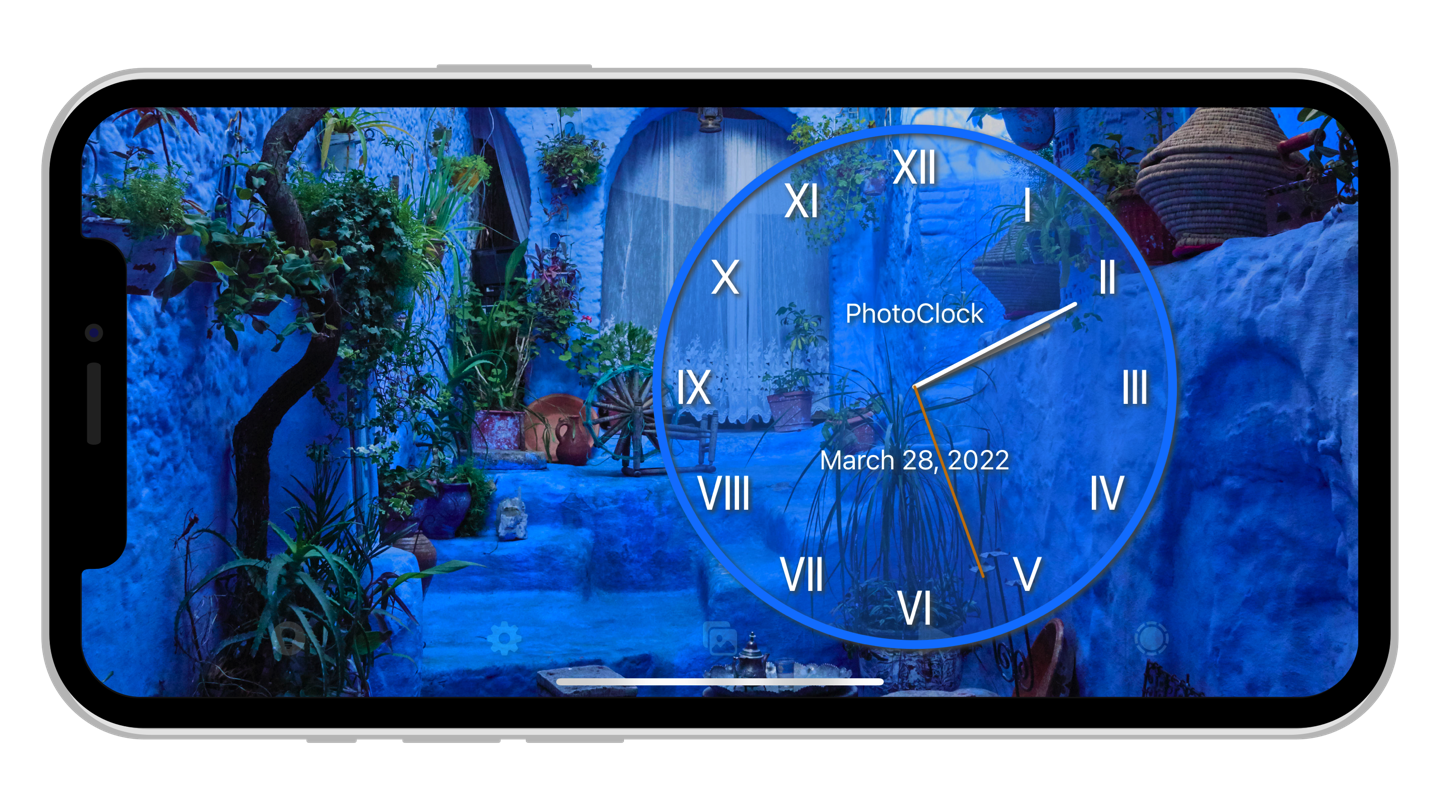 Turn your device into a stylish clock 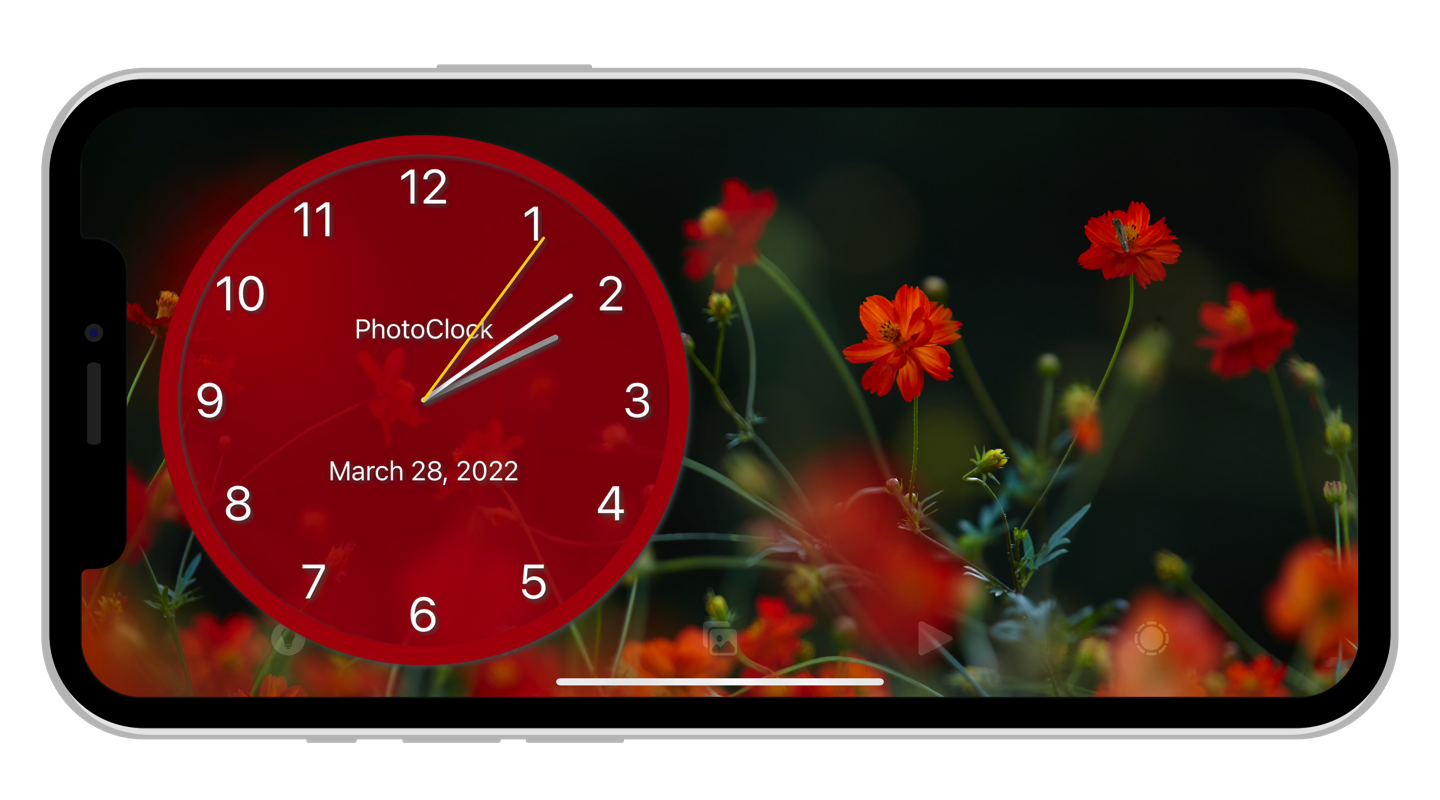 PhotoClock Pro uses photos you can add and organize within the app as a background to a fully customizable and stylish analog clock. With twelve default themes to show you some possibilities, you can create and save your own clock themes in groups.

Every element of the clock face is customizable, including switching between Arabic and Roman numerals, number only on 12, 3, 6, and 9 o’clock positions, and whether to show numbers at all. In addition, you can color and adjust the opacity of the clock face background between zero to 100%, and you can also change the color and thickness of the clock frame!

You can import your photos into as many user creatable albums as you want. If you don’t have any images, multiple additional photo packs are available as in-app purchases. If you don’t need any optional image packs, you can hide them entirely and utilize PhotoClock Pro to the full at no additional cost after paying the initial purchase price.

A professional photographer developed PhotoClock Pro to show off images and utilize your device as a beautiful and elegant clock while you are not using it. We recommend putting your device on a charging stand if you intend to use it as a clock for extended periods. There is also a brightness slider to adjust the brightness while using PhotoClock Pro beside your bed. When you close PhotoClock Pro, we’ll restore your original brightness settings.

For details, read on, or you can buy PhotoClock Pro on the App Store.

For many years I’ve wanted an app that does what PhotoClock Pro does, which is in essence, to provide an analog clock on my iPhone or iPad screen and display images behind the clock. The basic design was relatively easy to complete, but as I worked on PhotoClock Pro I started to want more and more features, and have actually added one more feature already since submitting version 1.0 for review, and I’ll show you that shortly as well. The In-App Purchases that I’ve added currently amount to ten Background Image Packs of my own photo that you can buy for between $2.99 and $5.99, depending on the number of images in the pack. These are completely optional and can be hidden too. The base price, which I’ve currently set at $7.99 gets you the fully functional app. So as not to fill your iPhone with my images even if you never use them, apart from multiple app icons that you can choose from, there are no images actually stored inside PhotoClock Pro when you buy it. They are downloaded after you buy them and stored within the app at that point. Even the icons for the Background Image Packs are only downloaded as you need them. Here is a series of three screenshots that I’ve captured to show you the ten image packs that I’m launching with, and you will also notice a My Image folder at the top of the list. If you don’t want to see my image packs, just tap the eye icon in the top right corner and they’ll collapse away, leaving just the user albums visible. We start off with one album for you to load your own image into, but as you can see in the right-most of the three screenshots, you can slide the albums to the left to reveal an option to create a new album. When you no longer need an album, you can slide it to the right to delete the album and all of the images inside it. 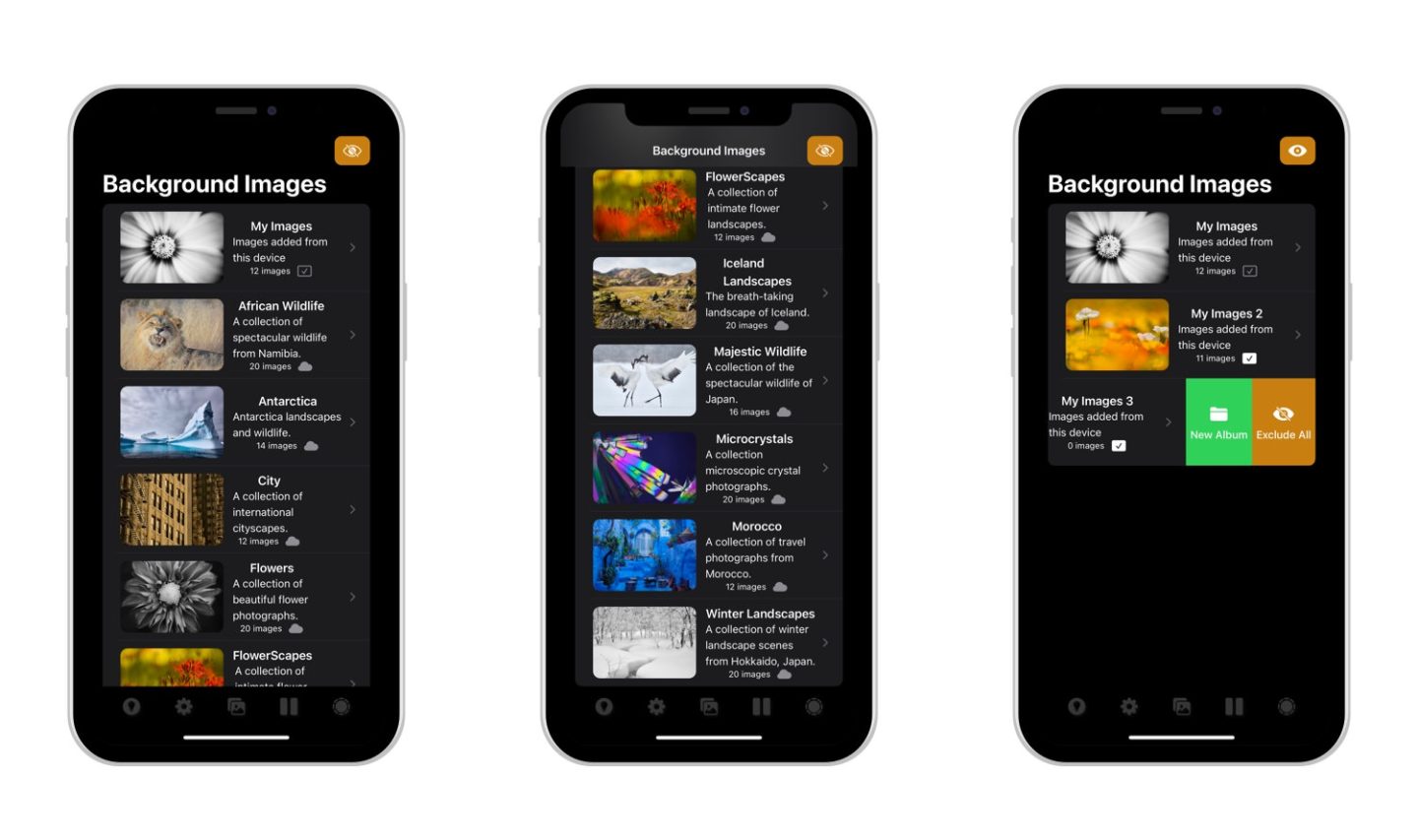 When you tap on an album you go inside to see a list of thumbnails showing what each image looks like and provides a few more options via the management panel at the top of the list and by sliding the images themselves. In the user albums, if you tap the pen in the top right corner you can edit the album name and description, to help you organize your albums as I’ve organized the image packs. If you enter an image pack that you don’t yet own, you will see a button at the top of the list to buy the pack, as you can see in this screenshot of my FlowerScape pack. Note too that there is a cloud icon below each image title showing that the cloud is not yet downloaded. Once you buy an image pack it will be automatically downloaded and all images marked as Included, meaning that they will be included in the slideshow behind the clock, which we will get to very soon. 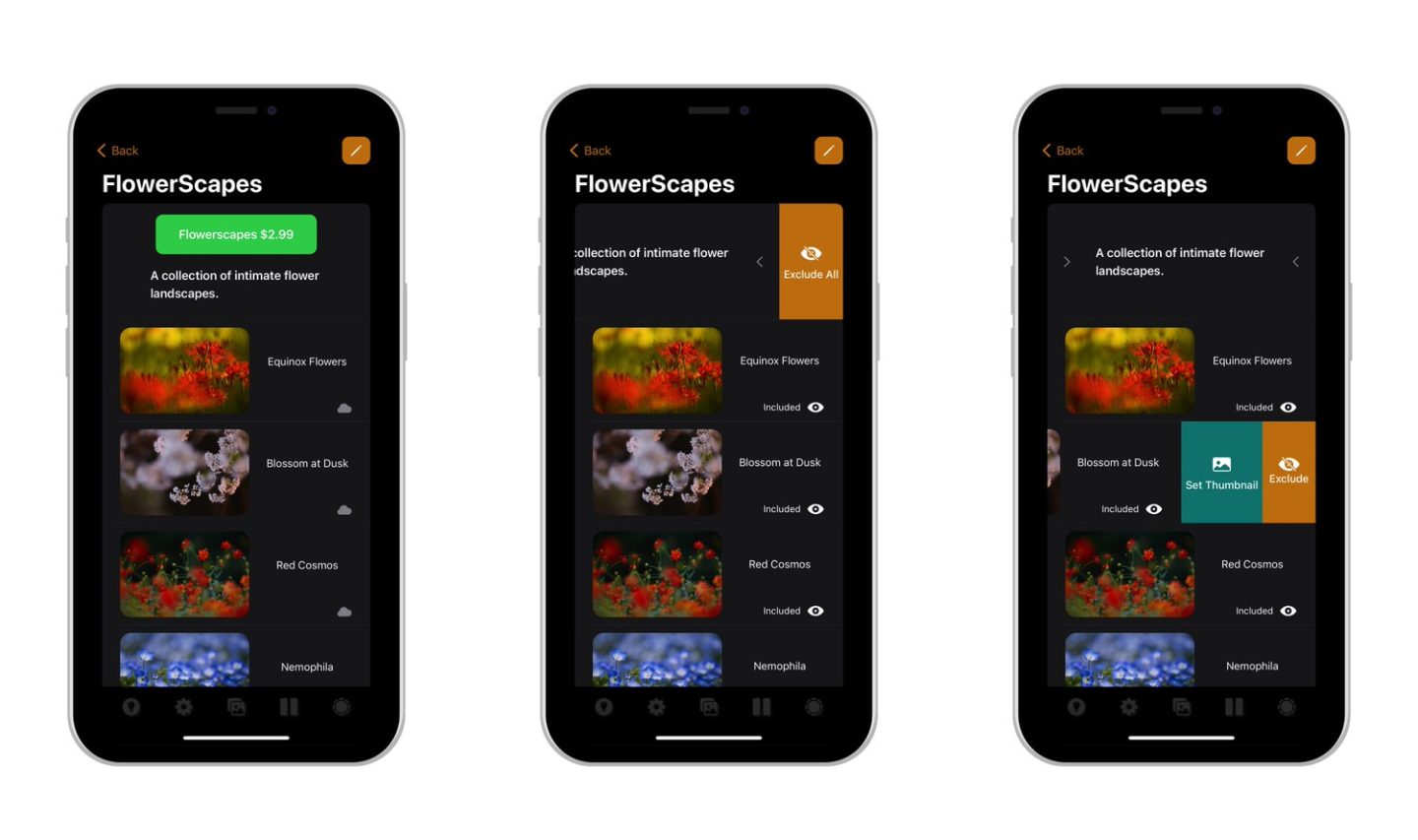 As you can see in the center of these three screenshots, if you swipe the band above the list of thumbnails there is an option to exclude all images in that set from the slideshow. If you swipe there again, they will all be reincluded in the slideshow. You can also swipe the top band to the right to delete all images in the folder. Swiping on each individual image includes or excludes that image. There is a second image swipe option that enables you to change the master photo for any of the albums. Unfortunately at this point, you have to close and reopen the Image Manager for that change to take effect. To get into the Image Manager you just have to tap the center icon in the bottom toolbar. Note that the bottom icons dim and become almost completely transparent after seven seconds, so that they don’t obscure the background images in the slideshow. They are still easily visible while the Image Manager or Settings screens are displayed, but can be difficult to see while images are displaying, depending on the contents of the image, so you may need to tap down there to un-dim them when you need to change an option. OK, so I created a short video capture of PhotoClock Pro on the iPad, running through the twelve images in the FlowerScapes image pack with the default clock showing, and I’ve embedded that here for you to check out. Of course, you can change the duration of the slides from 3 seconds to 5 hours, via a pulldown list in the settings, and you can also simply pause the background image by tapping on the Play button right of the center button at the bottom of the screen.

The default clock is one of 12 default themes. There were originally going to be ten themes, but then the Ukraine situation arose, so I added a theme called Ukraine Pride using the yellow and blue national colors, and eleven themes felt clunky, so I added one more to make it twelve. Then I realized that it would be nice to be able to create additional groups of themes, so I added that feature, but an empty second theme also felt clunky so I added seven more. Then I realized I could simply enable the creation and deletion of themes to your heart’s content, and because you might at some point decide that you just want all of the default themes back, I added an option to reset all of the themes back to their default twelve and seven in two groups. Because there are so many options, there are a lot of pull-down menus that save space, and I added two seconds that collapse down until you hit the gear icons, to the right of the Clock Theme Groups section and the Background & Frame options. Here are four more screenshots, with the two on either side showing all of the options on the settings screen, the second showing the theme management options, and the third showing what I internally called the theme maniac options, and they are where you can change the color of the clock hands and digits, etc. At the top of the Settings screen, you’ll find the most commonly used settings for the clock itself. As you can see, you can change pretty much everything about the clock, including the color and opacity of the background, the color and thickness of the frame, and whether you use Arabic numbers or Roman numerals. If the writing is a bit small in the screenshot click on it to open it up in the Lightbox for a better view.

At the bottom of the third screenshot, you’ll also see that there is an option to force the screen of your device to always stay on if you want it to. With that option active you can of course still lock your screen manually, and it will stay off, but unless you do manually lock your screen, it will stay illuminated so that you can always see the clock. This is useful if you want to keep it displayed on your desk, or even as a night clock beside your bed. You may not want to keep the screen on full time using your main iPhone, but if, like me, you have some old devices hanging around, this is a great way to give them a second life, rather than pushing them to the bottom of a drawer. Just below that is a button to open the icon browser, where you can choose from 19 icons using the twelve default themes and another 7 copies of some of the themes with photos in the background. I like to roll the iPhone over to landscape mode when looking at the icon browser because the 3D effect that I applied to the icons is more obvious in landscape mode. Just tap an icon you like and press OK to apply it and then when you close PhotoClock Pro you’ll find that it’s using your newly selected icon. 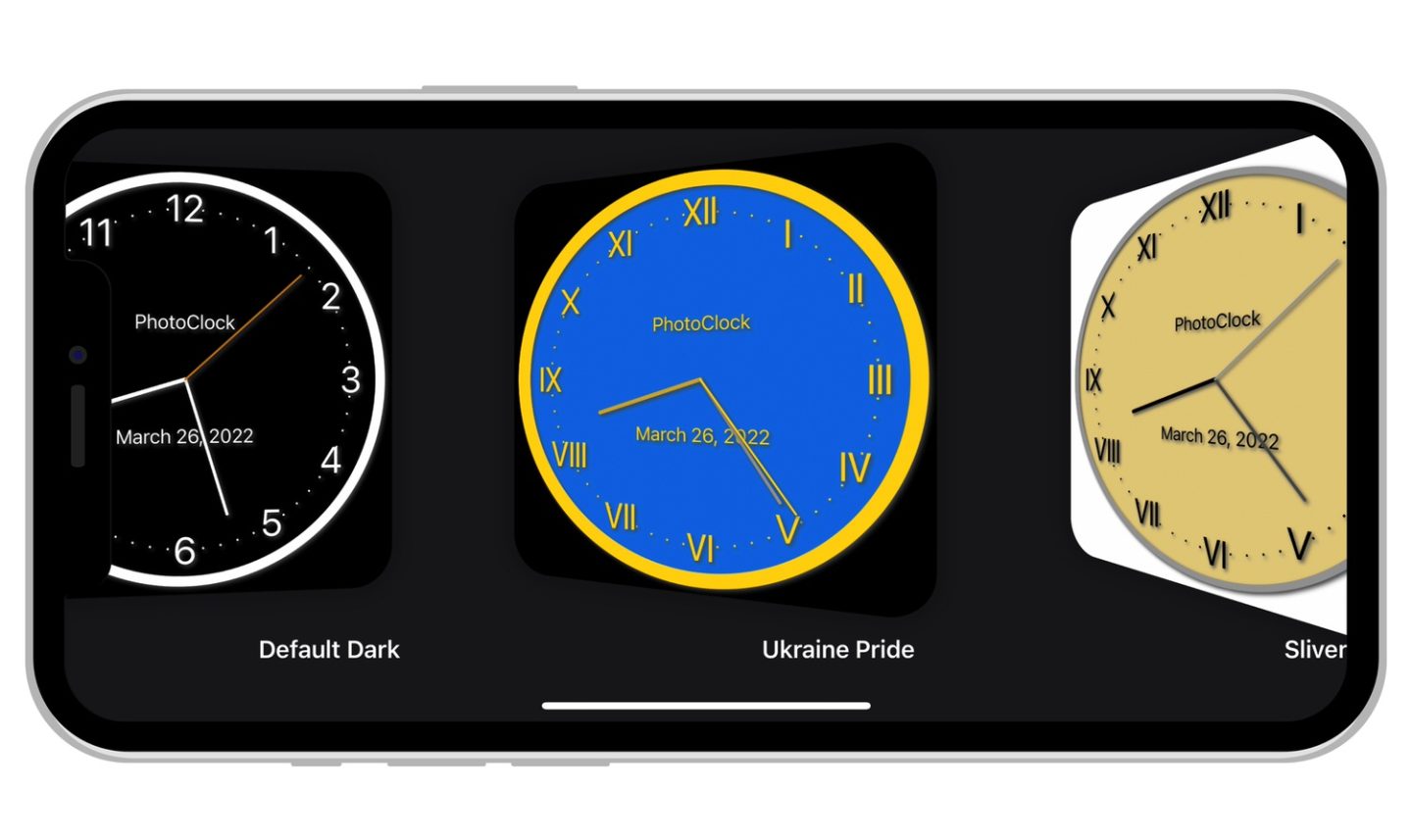 The themes are of course just ideas, so show you some of the possible combinations of settings. There are literally thousands of combinations that you could create, and although you’d get lost with that many, you can save anything that you create as well. Note that changes are saved as you make them, so you have to save a copy of something that you like before you start to modify it as a new preset.

The right-most icon in the bottom toolbar changes the size of the clock. To move the clock you simply press and drag it. We remember where you place the clock for all of the orientations of the device, so you can have the clock in a different location for landscape and portrait modes, and we separately save the location for portrait and orientation flat modes, for when you lay the device down. It generally starts in the middle although occasionally, if you install and first launch PhotoClock Pro with the device at a certain angle we can’t get the coordinates and it appears in the top left corner. Once you move it though, we’ll remember where it’s placed and restore that information the next time you switch to the same orientation. 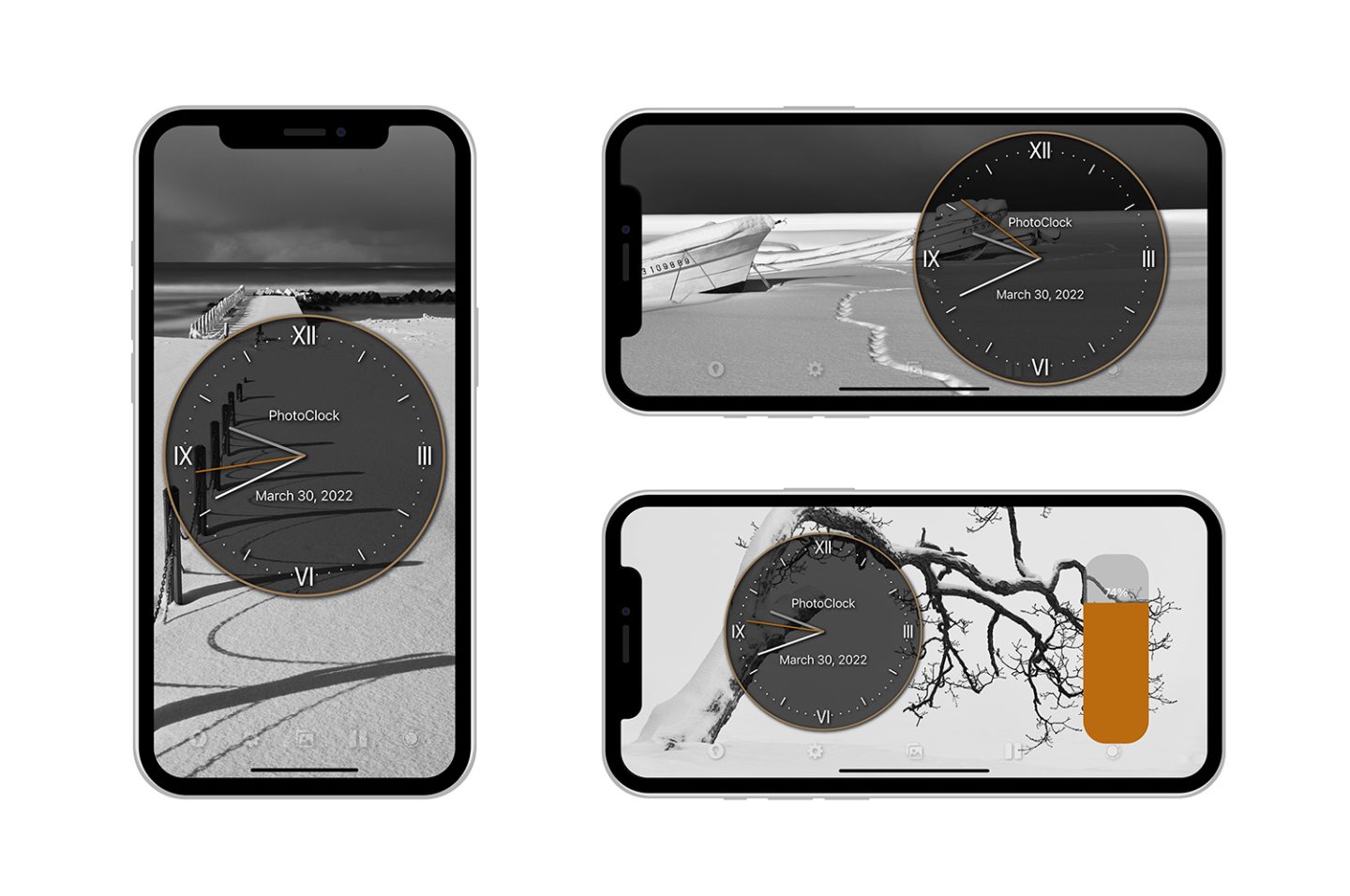 The lightbulb button on the left of the toolbar is to change the screen brightness. If you leave the Brightness slider at the bottom it will simply use the brightness set on your device. If you move the slider though you can change the brightness and we remember where you place it, so you can set it, for example, to a very dark screen for use in bed. When you close PhotoClock Pro though we set the brightness back to your original device brightness, so it doesn’t interfere with your usual settings.

That’s about all for now. If you’d like to bring some elegant analog to your digital life, you can pick up PhotoClock Pro today, on the App Store.

Sign-up for our newsletters if you want to be kept in the loop on major new features, or other topics, and you need any help, here’s a Tech Support button as well.

Apple, the Apple logo, iPhone, and iPad are trademarks of Apple Inc., registered in the U.S. and other countries and regions. App Store is a service mark of Apple Inc.