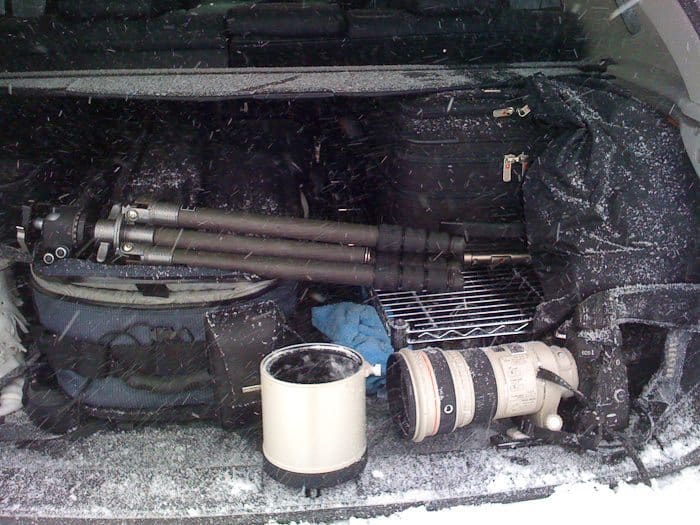 When I go out shooting, I usually put my memory card into my Lexar FireWire 800 card reader as soon as I walk in the door, and start my download. If I’m coming home from an extended trip, the images will be on hard drives etc. but still, the first thing I do before I do anything else (after hugging my wife of course) is to start to transfer my images to my main computer. Not only do I want that third backup, I can’t wait to see them on the big screen, and see if the images that I expect to be winners are as good as I’m thinking they are.

I was sitting on a train station yesterday afternoon though, listening to a Podcast, and wondering what to do with my fingers while I waited. I decided to look at some photos, and instead of going into my stash of Best Shots, that I sync to the iPhone to show people, I went to the Camera Roll folder. I could see the little number in parenthesis saying 24, and wondered what might be in there.

As I looked I saw pictures of ink cartridges and signs with flower names on them, shot in parks as a reminder of what I’d shot, but as I went down, I noticed the image below, shot on the last day of last year, after a shoot on a frozen beach of the Inawashiro Lake in Fukushima Prefecture, where I’d captured some of my favorite images of 2008. (You can hear about the shoot in two Podcasts that I released as Episode 172 and 173.)

I was excited to find this shot, as it brought back fond memories of a tough, yet incredibly fun shoot. I was also a little disappointing that I’d forgotten that I even took this photo at the time. I could have used it in my Podcast to impress on you how tough the conditions are. Also, it was a reminder of how lucky I am to be able to buy professional camera gear, that can withstand such conditions without too much mollycoddling.

I recalled that I threw everything into the trunk of the car, and left it pretty much like that, until an hour or so later, when I came back out of the hotel. I’d not wanted to take it inside as condensation would have formed, possibly damaging the camera. When I came back out and opened the trunk though, everything was still frozen, proving to me again how cold it really was. All of this came flooding back to me as I looked at the image six months later, on a hot afternoon on a crowded Tokyo train station.

As I thought about this though, I was a little annoyed with myself to find that an iPhone image had brought back so many fond memories. I don’t take the iPhone seriously as a camera. There’s proof of this in the fact that when I’m feverishly transferring my ‘serious’ images from my memory card or hard disk to my main PC, it hadn’t even occurred to me that there were images on my phone that I also needed to transfer and backup. I was kind of annoyed with myself for even having an emotional response to an iPhone picture!

Of course I should have known better. I know that it’s the contents of the image that count. Sure, I wouldn’t swap my 21MP images that I can create beautiful large fine art prints from for the world. But as a memory, it was a bitter-sweet reminder that a photo is a photo.

Martin’s Gear in the Trunk of the Car