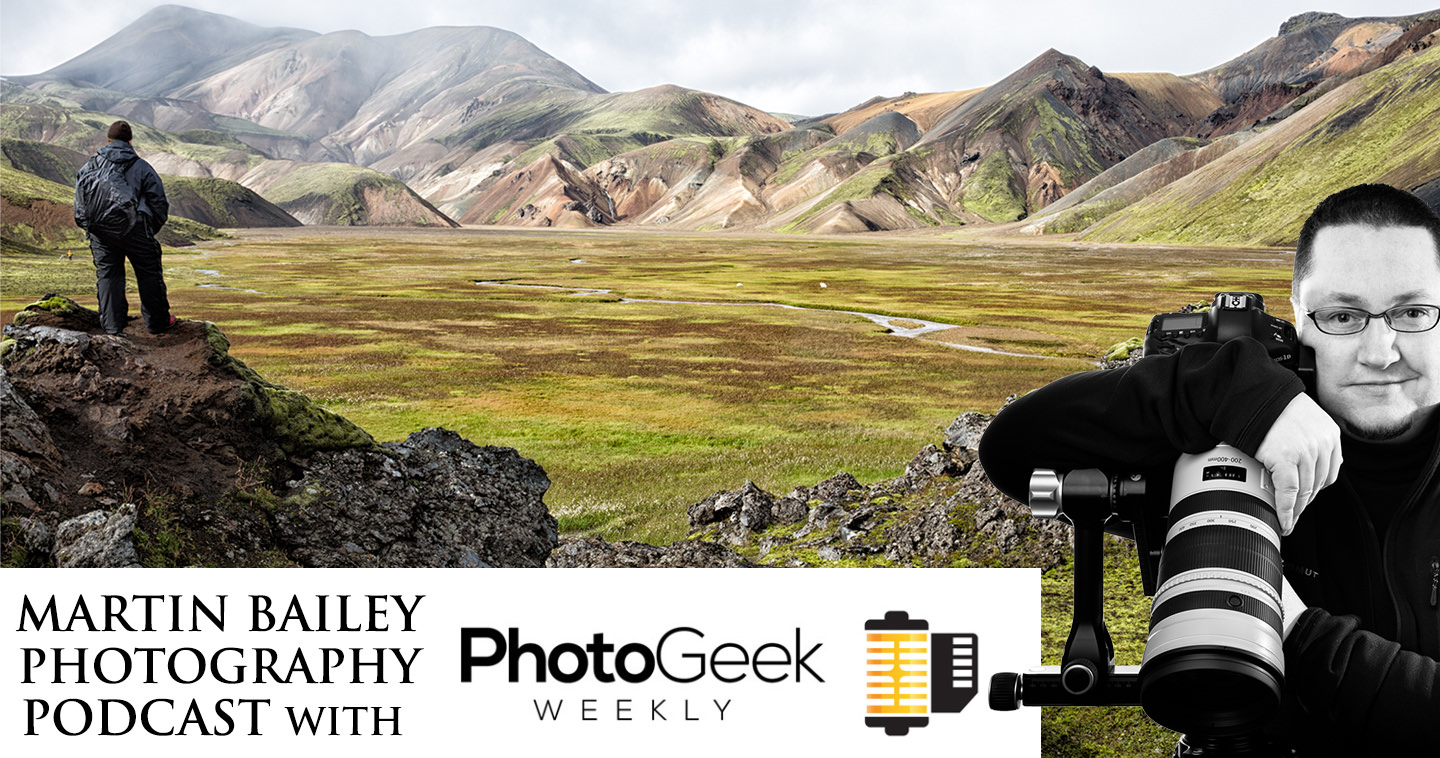 This week’s podcast is a collaboration with my friend Don Komarechka, who, among lots of other things, runs the Photo Geek Weekly Podcast. I will be teaching at the Out of Chicago Live event again next month, and in addition to my own session on Microphotography, Don and I are doing a joint session to cover everything Macro, so we decided to do a joint Podcast and mention the event together. We went on to record a podcast in Don’s usual format, so this is really an episode of Photo Geek Weekly, but it was fun to record together, as usual, so we figured we’d just both share this audio.

We discuss the change in business strategy for Ricoh / Pentax, weird ways to use film cameras, another discussion of NFTs and why the connection to Facebook is even worse, and what you give away when you enter a photo contest. Here are links to the stories we covered and embellished for your reference and further reading.

Story 1: Questioning the value of ‘mass production and mass sales,’ Ricoh is looking to take a more direct-to-consumer approach in Japan (via DPReview)

Story 4: Share your best iPhone macro photos for a chance to be featured across Apple’s social media and ad campaigns (via DPReview)
Related: The Shot On iPhone Macro Challenge Official Rules PDF (via Apple) 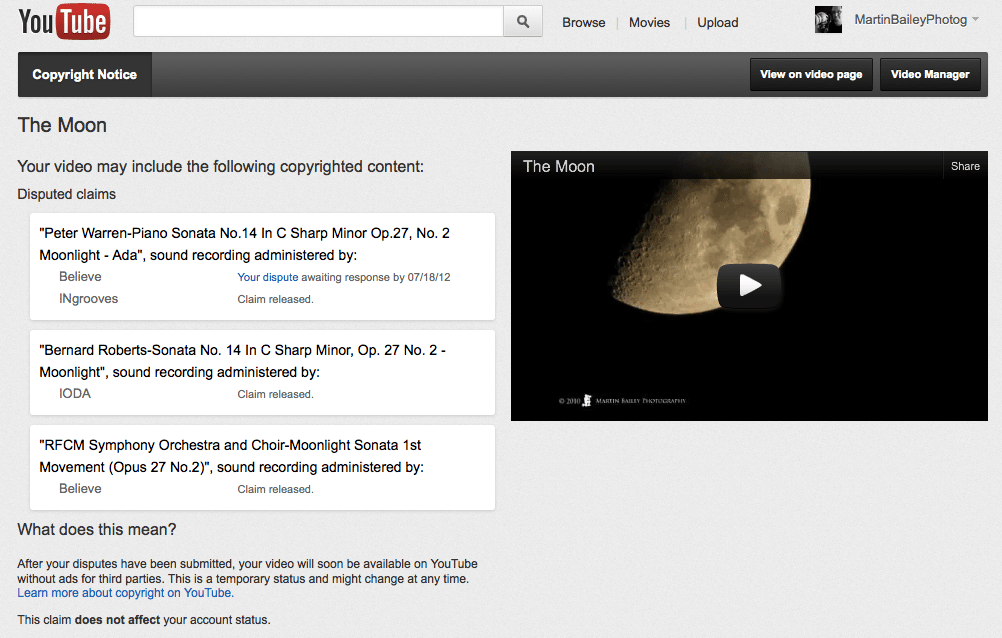 An Open Letter to Google/YouTube From a Disappointed Disciple

For more than a year, I have been continuously hounded with copyright strikes from various claimants on YouTube, claiming that the music used in my The Moon video has been used illegally.

Until last month, every time this happened, usually by two or three companies at the same time, and sometimes even by the same company multiple times, I disputed the claim, and it was then released by the claimant. A stressful experience each time, but I like the video, and wanted to keep it public, so I filled out my details and worked through each claim. 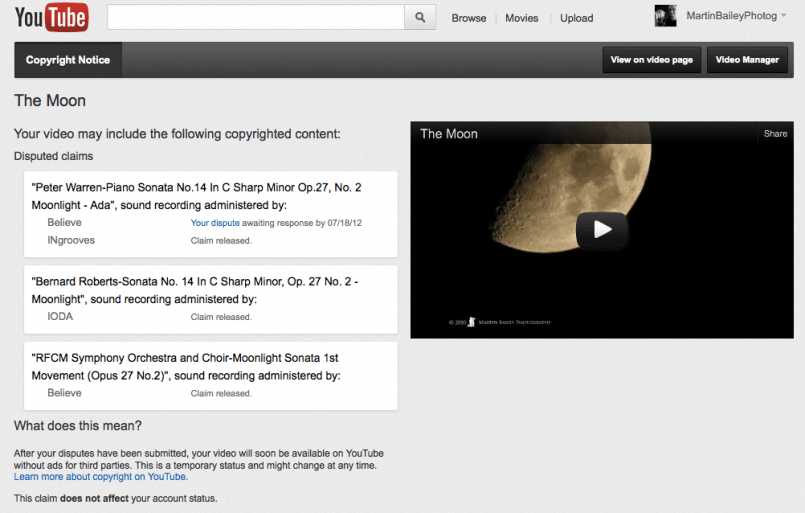 Then, last month, for the first time, UMG rejected my dispute to get the claim released. They asked for proof that I have a license, so I copied the License that I bought from UniqueTracks on May 23, 2010 to my Dropbox, and sent posted a link for UMG to check it. I presented the actual license, but here is a copy of the mail I received at the time.  I probably shouldn’t post the actual license here…

The process was a whole new level of stressful. This time I had to acknowledge that filing a complaint may lead to legal action. I don’t have time to fight a battle in court over a 5 minute video! Even though I have a perfectly legal license.

Oh, and if you are wondering whether or not my license was good for content posted on the Internet, or more specifically YouTube, here’s a section from the license, that I presented to UMG last month.

OK, so UMG now had my license, and I’ve been checking back every week or so to see if the claim had been released. Honestly, a part of me was nervous. I know I have a license, but could still have to go to court to fight this, so I lost sleep a few nights as this possibility crossed my mind. 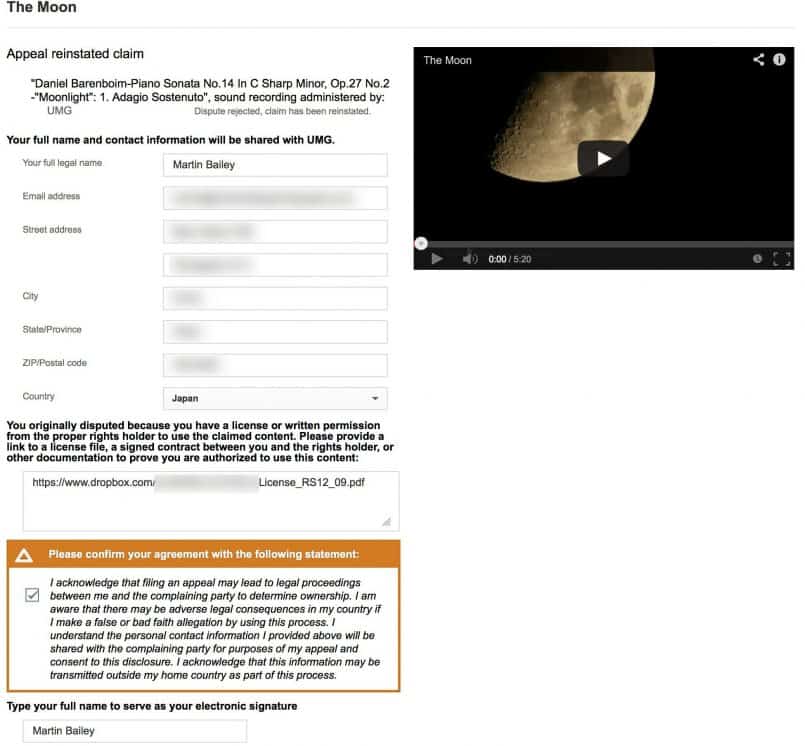 Well, today I woke up to an email from YouTube, telling me that my video had been disabled, because of a the infringement claim from UMG. So, they didn’t have the balls to take me to court, but they didn’t have the decency to release the claim either. The video is no longer publicly viewable. 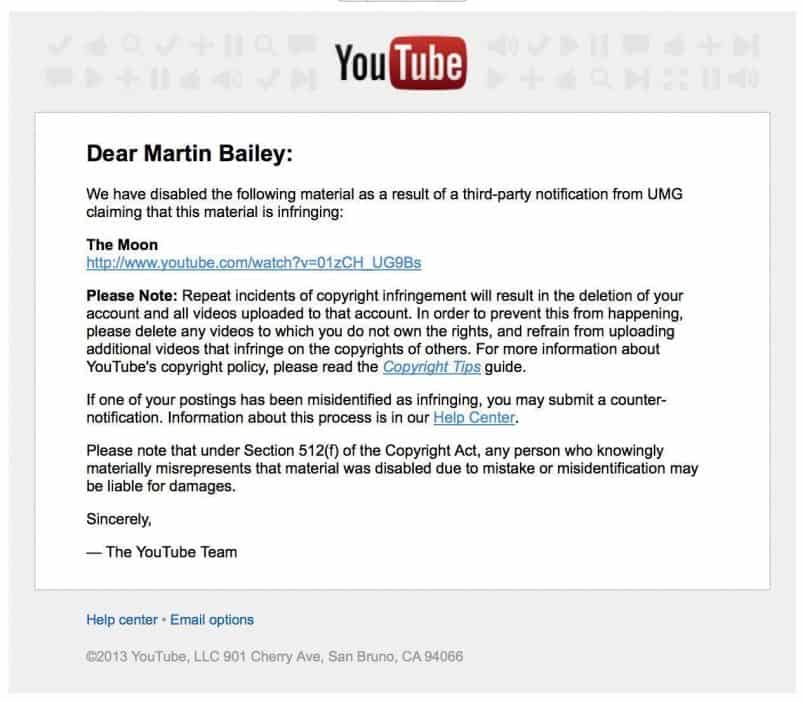 I followed the link to my video, and could not access YouTube, until I clicked the I Acknowledge button at the bottom of this notice.

Before I could go on, they wanted me to watch a cartoon Copyright School video, and answer some questions about Copyright. 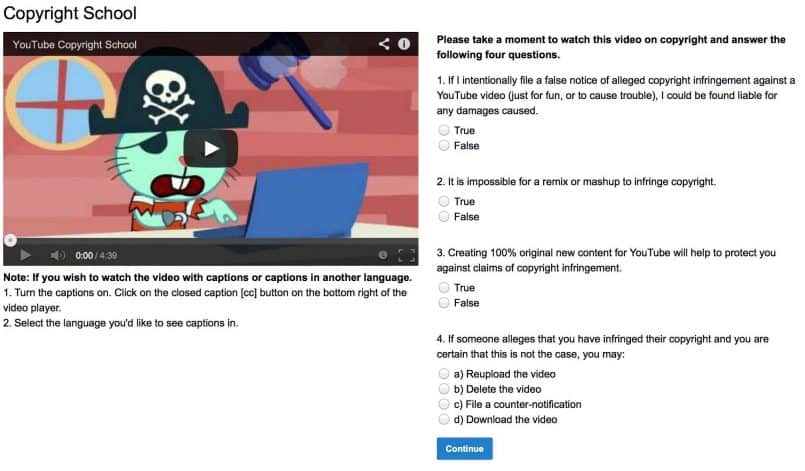 I got all the questions right. And guess what, I didn’t even watch the video! 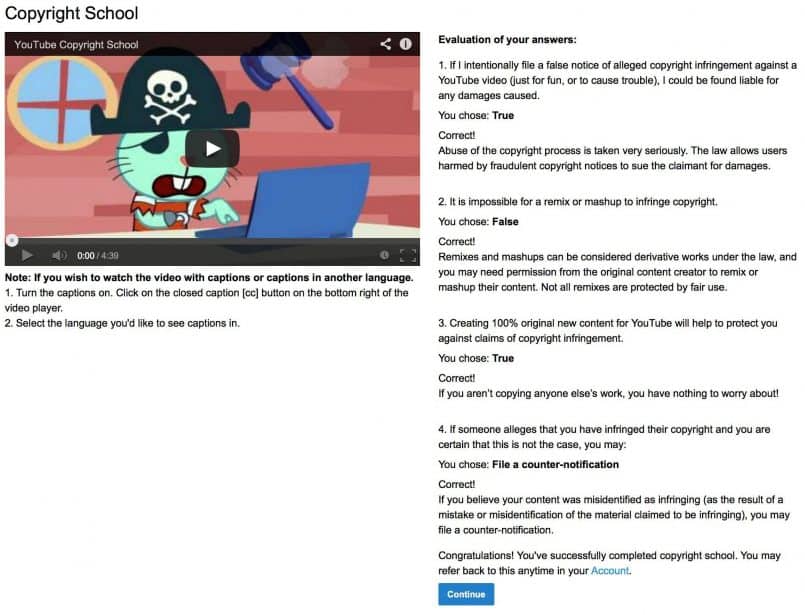 So, now my video is Removed, but there’s a link to submit yet another dispute, or so I thought.

I clicked on Submit Counter-Notification, but this time, I was presented with a message that if I go ahead, I WILL have to appear in court, to protect my relaxing little five minute video of the moon traversing the sky, for which I have a valid license for the music. 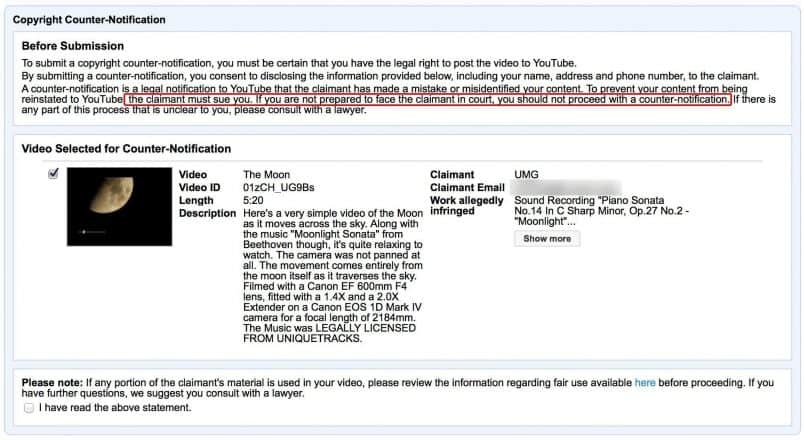 There was no explanation why the dispute was being continued. Just strong language about how I should not proceed unless I want to be sued. Of course I don’t want to be sued! I have deadlines to meet and real work to do. I don’t have time to piss around fighting court battles, not to mention that I can’t afford to hire a lawyer to fight this!

But you know what, UMG, YouTube, Google, I might not have the time to fight this, but I do have a license for this music. You’ve seen it, and you still disabled my video and threatened me with legal action. I have been pro-Google since day one. I have been a part of Google Plus since I was sent an invitation to join the public beta. Hell, I was in a hospital bed having just had surgery when I signed up and started to get involved in G+. You have always had my support, and you probably always will, but this has seriously pissed me off.

Actually that’s not how I feel. I’m not pissed off. I’m disappointed. I’m disappointed that a company that I love fails to put the processes in place to protect me from this crap. I’ve included Google people in posts about this on Google Plus, even offering ideas on how we may be able to prevent this sort of claim by building a system into YouTube that would allow content creators to attach a copy of their licenses, but I never heard back.

So, here’s your open letter to Google and YouTube. What do I want? I want my video reinstated, and the copyright strike removed from my account. I would also like to see you put that system in place so that I can proactively prove that I have paid good money to license the music used in my content. And guess what, I would like this to happen without going to court. I run a very small company, just me and my wife, and if court is the only option, you can leave the video dead, and me very disappointed.

I found out this evening that this claim causing a strike against my YouTube account prevents me from holding and recording Google Plus Hangouts of Air. This is incredibly unfortunate, as I have been planning a Hangout on Air with listeners of my Podcast to celebrate the 400th episode on Dec 15. With this in mind, I have just filled out the Counter-Notification form.

I do this with confidence thanks to the folks at UniqueTracks, who have alerted me to the fact that the claim is for a different recording to the one I have a license for. Essentially, it’s a mistake. UMG claim I am violating the copyright of a recording by Daniel Barenboim, when the version I used in this video is actually a recording by Andrej Rakic, 1970.

Thanks to UniqueTracks for stepping up with this information! Now let’s keep our fingers crossed that the claim is released before Sunday the 15th, so we can have our party! 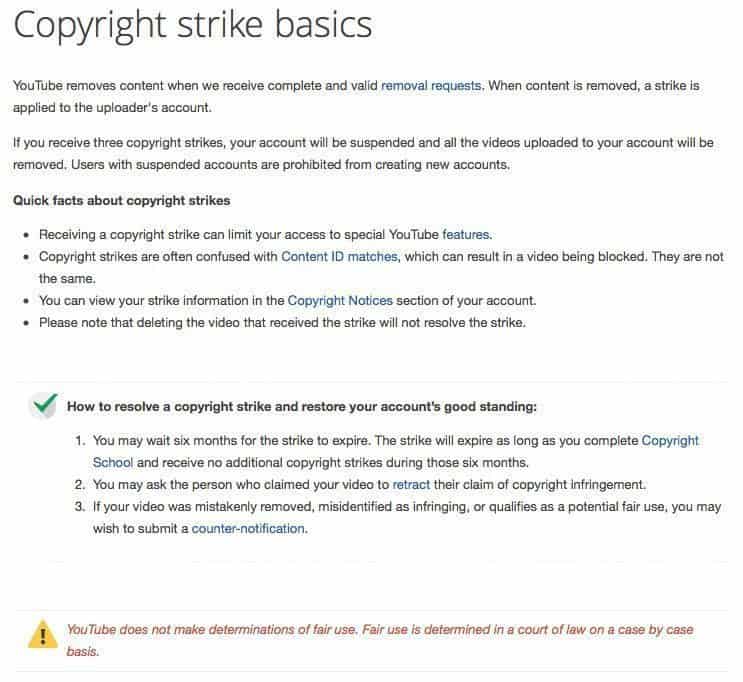 OK, so I last night I paid $199 to Vimeo for their PRO account. This enables me to embed full 1080p HD video into my blog. I have to be honest and say that one of the reasons I started using YouTube was because I didn’t want to pay a yearly fee to Vimeo, after all, I can get it for free on YouTube, right? Well, as I’m sure some peoples’ Grandmas have told you, there is sometimes nothing more expensive than FREE.

I have probably invested $1,000s of dollars of my own time over the last year messing around filling in forms on YouTube to remove the countless claims for the music on this video and a few others. As I said above though, the The Moon video has been on Vimeo for three years now, without a single issue.

If Google needs to monetise YouTube, I’d have gladly paid this money to them instead, but no. It would seem that the business model of YouTube expects people to use music illegally. That way Google are able to slap ads all over other peoples’ content, to make a few bucks here and there. I’m sure it’s a significant amount of revenue actually, and I doubt that the millions of people that use music illegally would be any more likely to pay for a PRO account anyway.

It’s a shame when being honest leads to this kind of persecution, stress and wasted time, and infringing copyright laws becomes the norm.

I don’t believe this. I woke up today to find an email from YouTube saying that this dispute with UMG had been completed, and the strike removed. Yes!

Or so I thought. I went to YouTube to delete this video, only to find that TEOSTO_CS have already slapped a new claim on the video. Now I can’t delete the video still, because that leaves a copyright strike again my YouTube/Google account. This is getting absolutely ridiculous. I’m like this || close to chucking it all in. 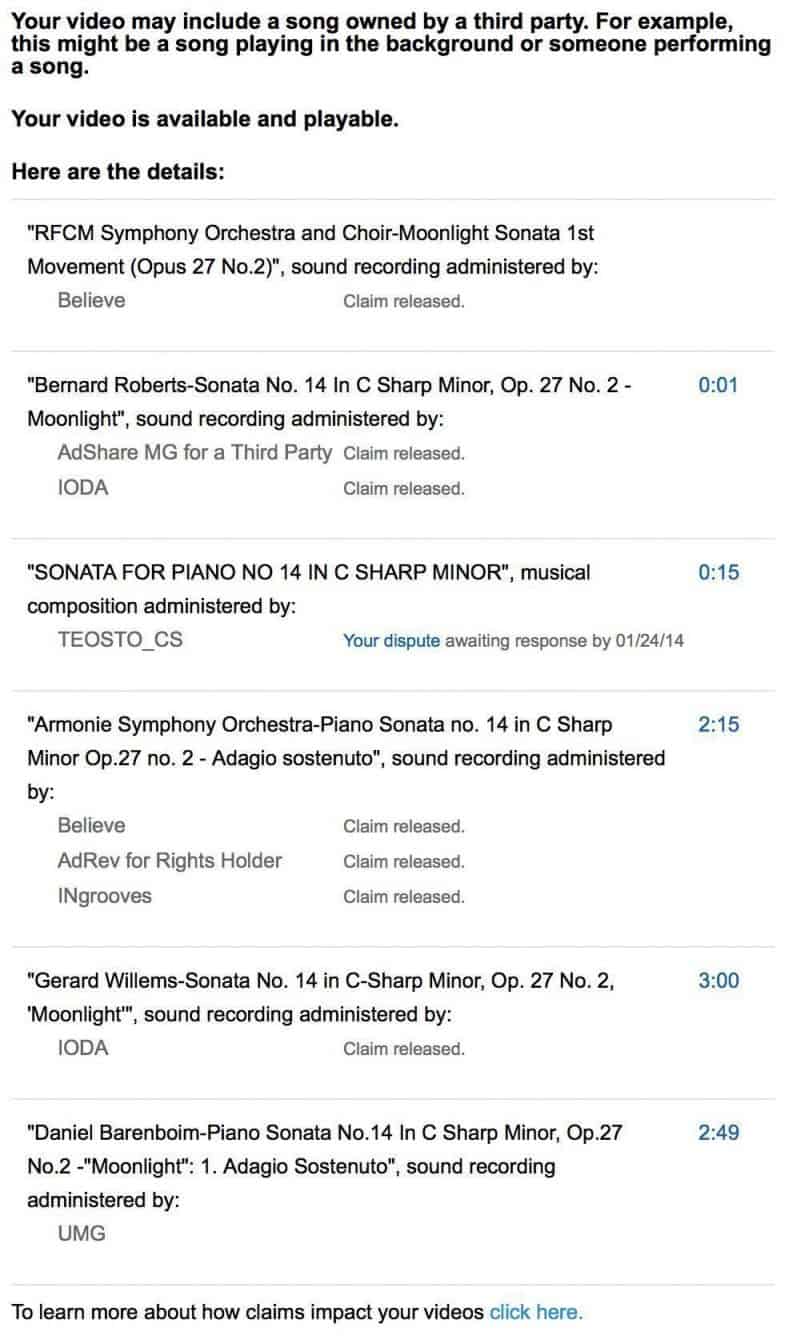 Finally, I just checked to see if the claim from TEOSTO_CS was still in place, and it was not, so I deleted the video. It’s a shame that deleting my art is the only way to prevent this crap from happening. I’m pleased I can put this behind me now though.

Here is the video itself, presented from my Vimeo account. Grab a cup of coffee, go full-screen and turn up the volume. Did I mention, the music in this video is absolutely beautiful!