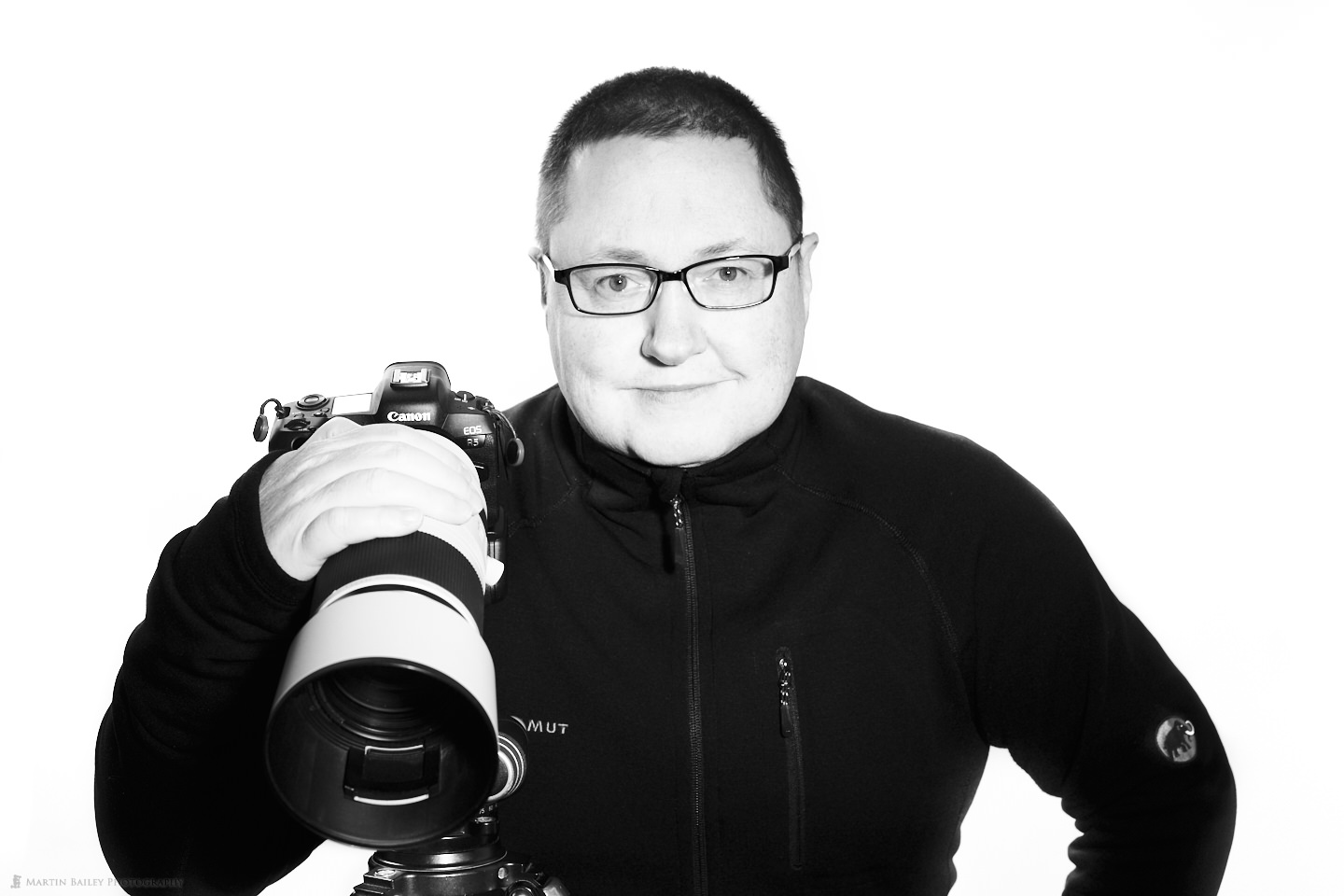 I shot my last bio photo on January 21st, 2014, my birthday, almost nine years ago. I no longer own the camera and lens in the old shot, and nine years have taken their toll on me too, so I have been thinking that I should probably update my self-portrait for a while now and have been looking for a time when I could reshoot. Today I had a choice of two topics in mind for a Podcast, and the first was about editing image selections, which I’ll be talking with our Patreon supporters about over the weekend, so rather than jumping the gun on that topic, spoiling it for the Patrons, I figured I’d go for the self-portrait.

Self-portraits are a weird beast. I imagine that many people, like me, are relatively self-conscious and not entirely happy with how we look, so sitting down to make an image of ourselves takes us out of our comfort zone and feels a little narcissistic. We want to look good, but know that this isn’t going to be easy because we don’t look good. Because of this, I’ve always tried to make the most of what I have, and having the ability to create good lighting and shoot enough images to select the best image from a larger batch generally helps.

When you are in business and become the face of your brand, our bio photos tend to be far-reaching. I always upload my self-portrait to Gravatar, a widely used service connecting profiles and mail addresses with a profile image. I upload my company logo, the kneeling photographer, for many of my email addresses, but for my primary addresses, I use my bio photo so that people can see who they are communicating with. So if you’ve ever communicated with me and wondered why my mail address is associated with a photo, the reason will probably be Gravatar.

Anyway, let’s get down to the shoot. I have three backgrounds in a pully system, as I do a lot of shooting in my studio. Previously I shot both a black background and white background shot, as I have both colors in my pully system, but I have almost exclusively used the white background image over the last nine years, so that’s what I’m going to shoot first. I sold two of my four Profoto Studio lights a few years ago, as I was only using one or two for most of my shoots, and today I plan to try something slightly different, which is to use a 2×3 foot softbox above and to the left, but pointing towards the background more, to keep that white, just spilling a little light onto my head.

For the second light, I’m going to use a honeycomb and point the light directly at my face, a little like a spotlight, more focussed light, to see if I can create something a little more dramatic. I also set up my recurve archery bow, to try and get something moody, probably with a black background, as my bow is primarily black with red accent colors. Archery has become very important to me since I took it up as a hobby in July this year, so I wanted to add a paragraph or two about it on my About page, and you can actually see that by going through the about screens after clicking the About button in the toolbar above.

Initially, as I prepared this Podcast and blog post, at this point, I had completed shooting two self-portraits. The new regular bio shot went fine. I like how the Profoto Zoom dish with the honeycomb inserted focuses the light into a spot. If nothing else, it helps to fill in the wrinkles around my eyes a little, so although my face is squarer than before, I managed not to look much older than my shot of nine years ago. Here is the resulting photo so that you can see what I made. I like the catchlight that the honeycomb spotlight provides as well. Softboxes provide great light but also produce a sizeable rectangular catchlight, as opposed to the circular spot in my eyes in this image.

I also moved the spotlight to the right of the camera so that it caused a bit of a shadow from my nose. It’s large enough that I didn’t want it to disappear, and a bit of shadow helps. I still put my camera into the shot, as it is part of my identity and brand, but it’s nice to replace the old 1DX with my current camera, the Canon EOS R5 and the 200-400mm lens with my 100-500mm lens, which is now my wildlife bread and butter lens.

Here also is an iPhone shot of my setup, with the Profoto Zoom dish on my first studio light, and the 2×3 foot softbox that I used to light the background. Note that I did still have to brush in a little increased exposure over the background on the right side of the image to make it pure white, as the light from the softbox dropped off before it got that far down the background.

After this, I moved on to try and shoot a second self-portrait with my archery bow, but I was not so happy with the first attempt. I ended up reshooting it on the Saturday, after I had started to prepare this episode, and will go with my latest version. Part of the original problem is that I was working in too confined a space, so I moved my camera and the spotlight behind my desk, and changed my lens from the 50mm to the 24-105mm so that I could zoom in to frame similarly but from further back.

I also moved the spotlight to the left of the camera instead of the right because the bow cast a shadow onto my face, which didn’t look great. I then removed the honeycomb so that the light was less directed. The honeycomb focuses the light more harshly than I needed for the second portrait, and removing it provided a hard light, but not as harsh, which seemed to work better by emphasizing the metallic feel of the bow.

I updated my image in the Gravatar system. I was surprised that the photo displayed, along with my comments on the blog, was automatically updated within a few seconds. That’s a pretty efficient and powerful system they’ve built there.

Show Me Your Selfie!

Anyway, a relatively short episode, but I’d like to end with a request for you to share a link to your own bio photos via the comments. It doesn’t have to be a studio portrait, but it’s always nice to see who’s listening, and If you have a story behind why you use the image that you use, I’d love to hear about that too.

Check out our About page: https://martinbaileyphotography.com/about/