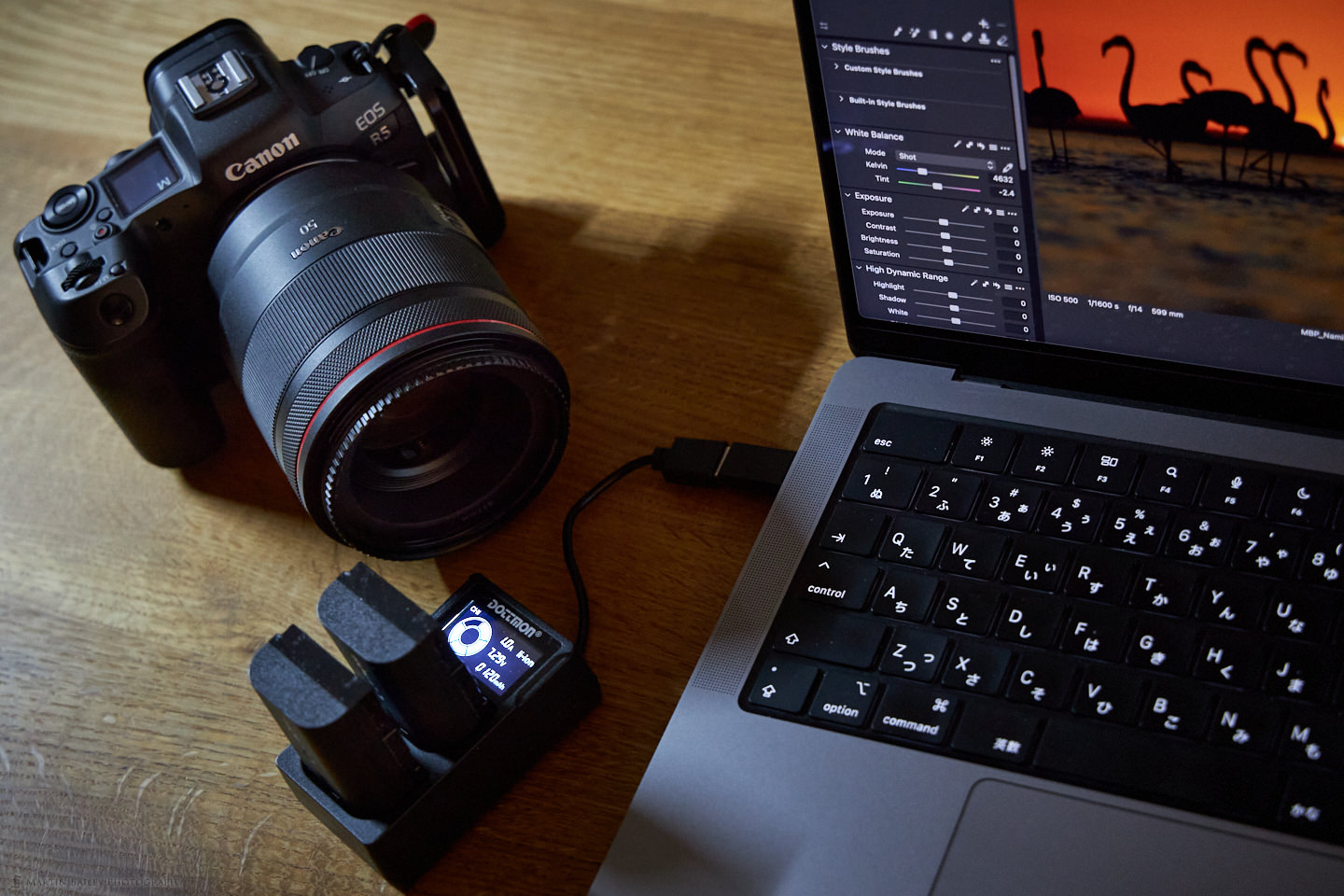 After buying my Canon EOS R5 I received several email from people asking if my battery life was shorter than expected. Because I had not been able to run my tours during which I shoot from dawn to dusk most days, I had no real baseline from which to answer with confidence that I saw no problems, but as I used my R5 more, I did start to notice that the batteries seemed to run down pretty quickly.

Initially, I put it down to the fact that a lot of the work I was doing was microphotography, during which I was running my R5 tethered to my computer, and I figured that was eating up the battery. I also thought that it might be down to the fact that I have not been using my cameras with a battery grip, and one single battery seems to run down faster than half of the shooting time we seem to get when there are two batteries in the grip feeding the camera.

Then I went to Namibia this summer and got my first chance to work with the EOS R5 in my usual way, out in nature, shooting as I always have, and it soon became very clear that my batteries were running down at least twice as quickly as they have always done. Much more quickly than my first Canon mirrorless camera, the EOS R. I started to think that maybe there was a problem with the camera’s design, as the batteries were running down too quickly for practical use.

I tried to monitor how I was using the camera over the first few days but couldn’t think of any reason the batteries were running down quickly from my usage. Then I noticed that the battery level indicators seemed to stay full until shortly before they completely ran down. They looked full one minute, then the next minute, they were flashing red in the electronic viewfinder, telling me I need to change the battery, and that indicates a problem other than the camera using more power than I’m used to.

So, that night, I figured I’d try connecting my camera to a USB cable and charging my batteries in the camera. I dislike doing this with a passion, as it takes a very long time to charge the batteries, and you can only charge one battery at a time. This is also the reason I dislike the standard Canon battery charger than comes with the EOS R5 and similar cameras that use the LP-E6NH battery because it only charges one battery at a time.

Then that same thought process led me to what I would find to be the cause of my poor battery life. Because I don’t like to charge just one battery at a time, I have for many years used a third-party battery charger and have otherwise been very happy with the two I’ve owned, but it turns out that my latest charger was not successfully charging the LP-E6NH. It was working fine with the LP-E6N that the 5Ds R uses, but the latest battery with the H appended to the end of their name was not fully charging, despite the battery charger showing that they were fully charged and the camera also reporting that they were fully charged when I initially put the battery in.

For the following two weeks, I put up with charging my batteries in the camera, and believe me, I was happy that I had this option, as I did not bring the standard Canon charger. When I got home, I sourced a new double charger that supported the new LP-E6NH battery, and once again, I have something that properly charges my batteries, runs on USB power, and takes two batteries at once.

Being a bit of a geek, I like the digital readout and the information this charger provides as it charges my batteries. It is also less than half the size of my previous charger, which was small. That is a very welcome change as we fight to get out gear onto airplanes with ever-increasing luggage restrictions.

The other thing I wanted to stress was the importance of troubleshooting technical issues. I am probably a little more optimistic than some about trusting that Canon wouldn’t make a camera that runs batteries down as fast as I saw. It was not a usable camera when the batteries ran out as quickly as they did. I also know, though, that some people love to find problems with gear and find some kind of twisted enjoyment in being in a position to complain about their gear.

I did find another problem with the R5 as I traveled, as Canon added a button to the LED screen that puts the focus point back to the center when you moved it away from the center. For some reason, though, they placed that new button over the histogram, as you can see in this photo as I started shooting in the Quiver Tree Forest on our first shooting day in Namibia.

I called Canon Support about this after getting back to Japan, and they kindly told me a setting that would work around this issue, but I didn’t want to use my camera in the state they recommended, and they did agree that it was probably an oversight that the icon was displayed over the histogram. I requested that they register it as something to try to fix in a future firmware update, but I have confirmed that it was not fixed in firmware version 1.6 released after I reported the issue. I mention this because I wanted to make the point that I don’t think Canon is perfect, but I tend to give them the benefit of the doubt until I have proof that they’ve made a bad design decision.

So, to finish, I want to leave you with some takeaways. Firstly, if you are having issues with short battery life and if you are using a third-party battery charger, please take a moment to check that the charger supports your batteries, especially if you’ve upgraded your camera since buying the charger.

Secondly, if you do notice something wrong with your gear, try to exhaust all of the possibilities before jumping to the conclusion that the manufacturer of your gear has messed up. As photographers, one of our strongest skills needs to be problem-solving. This goes for almost everything we do. In the studio, for example, when the light doesn’t look quite right, we must identify what is wrong and how to fix it. Everything we do involves cause and effect-related decisions, and that goes for problems such as the battery issue we discussed today as well.

Also, note that I will not provide a link for the actual charger I bought, as the same charger on Amazon.com does not mention support for the LP-E6NH battery. You’ll need to find something in your market if you are seeing a similar problem to that which I’ve described today.

Before we finish, I would also like to mention that we are currently locking in on the participant numbers for our 2023 Namibia tours, and we now have one space left on both the April and May tours, so if you would like to join us, check out our tours page and see if there are still spaces available. If the page says, they are available, proceed to the tour page and pay your deposit to secure your place. If you need more than one place, let me know and I’ll try to figure something out.

Get this post's short-link:
← Creating and Maintaining a Photography Website (Podcast 789) Brian Wood-Koiwa on Wabi-Sabi in Photography (Podcast 791) →
Become a Patron