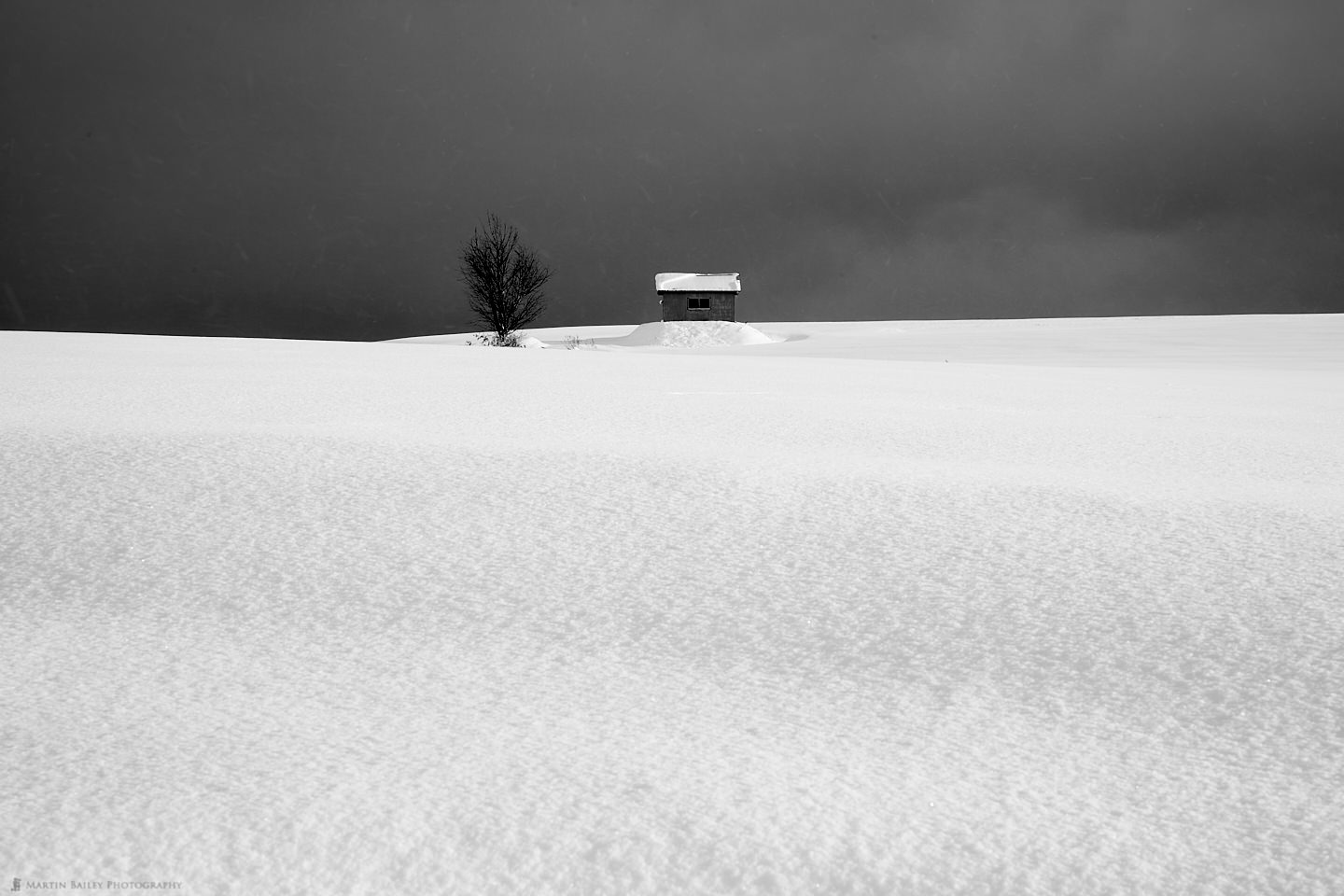 Having just completed this year’s Hokkaido Winter Landscape Photography Tour, today I’m going to start a three or four-part travelogue series to walk you through our antics as we made our way around the beautiful northern-most island of Japan for twelve days.

I’m always a little nervous as we start this tour, because the success of at least the first location, Biei, depends on us getting some falling snow while we are there. I plan for three days in this area partly to give us a better chance of getting that, but also because there are lots of things to shoot. In the past, we’ve gotten to the last few hours of daylight on day three before it snowed, and that was nerve-racking.

On this visit, it started snowing as we arrived in the area on day one, which is a huge relief and takes the pressure off for these first few days, but of course, we had to get out and do our photography before that became a given. We started with the trees behind the Takushinkan gallery, as usual. You wouldn’t know it from this shot, but without the falling snow, there is a brow of the hill just above the top of the trees behind them, and I love it when that is erased by the snow.

Even as the snow stops and the sky lightens I get completely put-off by this scene, and others in this area. The snow minimalizes everything and helps to create the look that I think suits this area so well.

Here’s another example, where the falling snow renders the scene in a beautiful minimalist style. I love how you can barely see the top of the hill against the very slightly darker sky here. I also love to see the faint shadow below the tree, and then how the patches of grasses punctuate the hillside.

This is really what this area is all about to me, and I love sharing these scenes with the guests on this tour. As I’ve mentioned in the past, I now have a piece of software on the Website that includes the EXIF shooting data with the image in the lightbox that is displayed when you click on the images, so if you want to check my settings for any of the shots, just click or tap on them to view the lightbox.

In stark contrast, as we walked along the hills in Biei, the late afternoon sun broken through the clouds to the right of this next scene, illuminating the foreground snow, outlining it’s texture while leaving the sky dark, which I enhanced a little in Capture One Pro to exaggerate the difference between the sky and the snow.

I do like this as well and think that I’ve kept a relatively minimalist feel to the image by not zooming in on the hut and the tree as much as I could have. Leaving them small in the scene helps to keep it simple, and also feels more effective when viewed as a large print, kind of as a reward for walking up close to the print.

The following image is another that you’ve seen before from previous years, but I can’t resist doing this. Again, it kind of requires you to look at a higher resolution version, but when you look closely at the line of trees in this image you can see that the falling snow has made the trees look like a pencil sketch, which once again, I find really appealing. I like to aim for a shutter speed of between a 1/40 and a 1/20 of a second to create this look.

Something that often comes up as I work with the group here is how I decide where to place the line of trees in the frame. My usual way of thinking about this is, if the subject is physically higher than I am, as in, I’m looking up at it, I tend, more often than not, to place that subject near to the top of the frame. If I place it anywhere else, you lose the feeling of it being higher, and I think that is important. Also, I ask what the better of the possibilities, a white field of snow, or a blank white sky. I personally prefer the snow, but that’s mostly in a symbolic sense. As far as the photo is concerned there really isn’t much difference.

The next photo from day two was a bit of a bonus. There wasn’t as much snow in Hokkaido, as usual, this year, and that has probably left more food in the hills for the crows, so this was the first time I’d seen what I conceitedly call Martin’s Tree with a murder of crows perched in it.

I left my shutter speed slow as some of the crows took flight, to add a little dynamism to the shot, and feel that the blurred crows add a slightly stronger Hitchcock feel to the scene. The texture in the sky for this shot also adds to that feeling, so I am pretty happy with this.

Another thing that I’ve not really seen at this spot in all of the years I’ve been traveling there, is the shadow of the tree on the snow, as we can see in this next image.

This was somewhat difficult to process, as I exposed for the highlights in the sky in the top right corner, leaving the foreground snow very dark. I did most of the work in three layers, one to bring out the detail and texture in the sky, a second to lighten that central bank of snow, as that was almost black, and then a third over the foreground snow. That third layer, covering most of the bottom of the frame has a tone-curve on it that snakes back and forth across the center line to create almost white snow while enhancing the shadow.

On our third day in the Biei area, we drove around to Mount Asahi to photograph the scenes either side of the ski slope there. On the way, we stopped to photograph the pillows of snow forming on top of the rocks in the river, that you can see here.

I usually shoot this with a much longer focal length, but I stayed pretty wide at 120 mm for this shot, as the individual pillows didn’t do much for me this year. They were small and not really well-formed, so I decided to portray the larger scene instead.

I took my new Rolleiflex TLR camera on this trip and shot a total of six rolls of 120 format film, and here is the first one I want to share with you, of the trees at the side of the ski slope.

I’d prefer to work a little more on this, as I’m still trying to get better results from the scanner software that people recommended in the comments on my recent post about scanning medium format film. The software is called SilverFast SE and although I can see the benefits of using it, the image quality that I’m currently getting isn’t as good as what I get with the native scanner drivers, so I’m trying to get some advice from their support team, and if that doesn’t help, I will probably rescan my film with the original Canon software.

The blue Shirahige waterfall behind our hotel was pretty much unchanged, but I thought I’d share a shot, to complete the documentation of the trip.

This is from the start of day four, as we walked around from the hotel before starting our drive to the next location.

I couldn’t resist stopping our bus as we drove out of town though when we were presented with this morning mist against the pastel dawn sky.

I originally converted this to black and white, which I liked, but these colors kept calling back out to me from the Apple Photos app, as I’d loaded both versions so that I could live with them for a while to help me make up my mind. I found myself preferring this, so I’ve now deleted the black and white version.

We’ll wrap it up there for today, as that takes us to our ten photo limit that I try to stick to. If you would like to join this tour, I have switched to running this twice a season from 2021 so we do have a few places left on each tour. Check out the tour page here: https://mbp.ac/hlpa

You can see details of future available tours on our Tours and Workshops page.