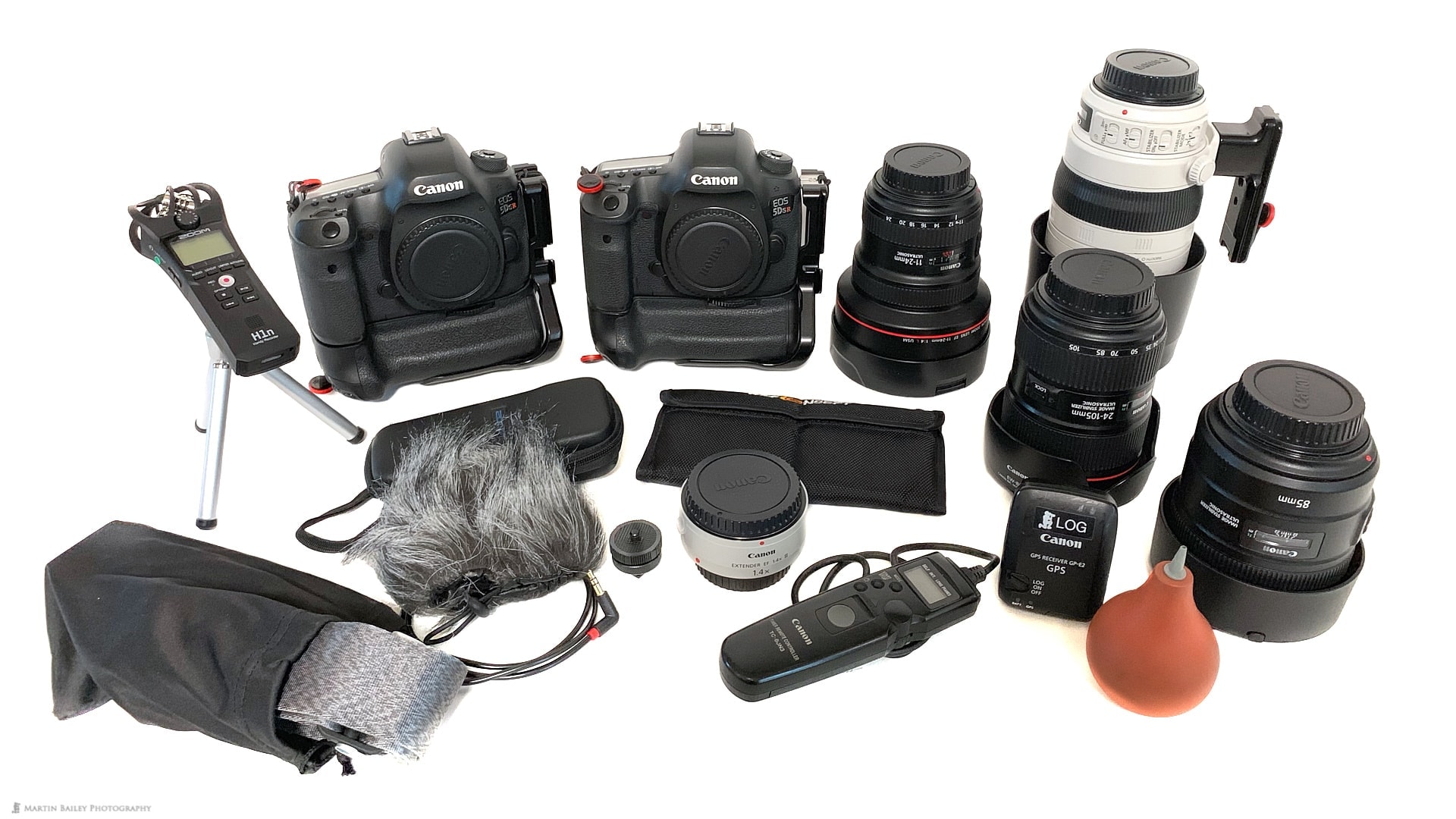 As I prepare to leave for this year’s Morocco tour in a few hours, I thought I’d share what I’m taking in my photography bag for this travel photography trip.

On my Morocco tour, we’ll be photographing a good mix of cultural travel photographs, landscape, and environmental portraits. I checked and see that the last time I did a What’s in the Bag episode was 2013 and the last time I opened up the gear to show you an itemized list was 2011 in Episode 315.

That was for Nature and Wildlife, so I had my 600mm lens included. Nowadays, that would be my 200-400mm lens with the 1.4X Extender built-in, but that is really all I add to the gear that I’ll share today, so it’s impressive how much I’ve been able to shrink my gear down.

First, here is a photo of my bag as I walk around with it, and you can see that because all of my gear now fits inside an 18-liter bag, my tripod looks a bit ungainly clinking to the side. When walking through crowded streets I tend to either leave the tripod in our vehicle or leave the entire bag, and just take one camera with the 24-105mm f/4 lens attached, and maybe have my 85mm lens and/or 11-24mm lens in my vest pockets.

The tripod here is my Really Right Stuff TVC-34L with a Leveling Base and BH-55 ball-head. I have a slightly lighter Really Right Stuff tripod with the smaller BH-40 head, but I have to admit that I generally now only use that as a second tripod when I’m traveling by car domestically. It’s sturdy enough for long exposures etc. but I really like the extra leg height of the TVC-34L tripod, and the BH-55 ball-head is just such a pleasure to work with that I find myself reaching for the combination in this photograph whenever I’m only going to take one tripod with me.

Here is the bag open, to give you an idea of how I lay it out. Thinking about it, this is actually what I took to Namibia this year, except I also packed the 2.0X Extender as we were doing Wildlife work as well, but that is the only difference.

I’ll go through and detail each item shortly, but for now, I’d like to mention that also in the past I tried to break my cameras down, removing the lens from the body while traveling to my location, I no longer do that with this camera bag, because it makes it difficult to fit everything in, in a sensible way. I do break the second body down though, as you can see.

note that I will move that air blower to my vest pocket and put the Peak Design straps on at least one of my two bodies once I get to my location. I like to leave the straps in their pouches as I travel so that the metal parts on them don’t rub against my gear, possibly marking it.

Even attached though, I can lay the strap across the top in a way that the metal doesn’t touch anything, but I don’t like to leave it like that for my international flights etc.

Note too that I also travel with a Zoom H1n digital audio recorder, which you can see in its black case at the bottom of the left compartment that also has my straps in here. I used to use the Zoom H6 digital recorder, and still do for some purposes, but the H1n is really small and light, and the audio quality is like it’s big brother.

I actually just really like recording the sound of things around us. I’m fascinated by sound almost as much as I am by the photograph. For example here is a lightning strike that I recorded during a summer storm earlier this year. I love the volume of information that is in this clip and how it gradually reduces over time. it almost feels like a beautiful full  peaked on the right shoulder then fading towards the left edge.

You can see the Zoom H1n out of the case marked with the number 1 in this next image. The camera bodies are both Canon EOS 5Ds R cameras. These have proved to be incredible cameras in the three years since they were released, and I have used just these two bodies for not only Landscape but portraiture in dark conditions and all of my Wildlife work. People said that a camera with this much resolution would be for still life and landscape only, and would always need to be used on a tripod. It’s given me great pleasure to blow all of those myths clean out of the water.

Number 4 in the photo is my Canon EF 11-24mm f/4L lens. The release of this lens enabled me to sell my 14mm prime and 16-35mm lenses, downsizing my kit by one lens, although the 11-24mm is a pretty big chunk of glass, so it wasn’t a huge saving weight-wise.

Number 7 on the list is the new Canon EF 85mm f/1.4 IS L lens. I don’t take this lens with me when I’m just going out for landscapes or wildlife, but I really like this lens for portraits, which is what it’s really designed for.

I’m hoping that we get a chance to photograph this gentleman in the irrigation canal in Morocco again this year. The new 85mm lens with that beautiful wide f/1.4 aperture will suck in the low light much better than my 24-105mm, although I did use that for this photo and it all came together very nicely.

Item number 8 in the photo is one of my two Peak Design Sling straps that I will be taking along with me. I reviewed these in Episode 629 and I’m still really enjoying using them.

Number 9 on the list is the Dead or windshield for my Zoom H1n, and below that is an audio cable that I can use to route the audio from the H1n into my camera if I should use the 5Ds R to shoot video, although I tend to use the iPhone to shoot most of the video that I do when I’m traveling, because the 5Ds R is not 4K.

Number 10 on the list is an adapter that enables me to mount the H1n on the 5Ds R via the flash shoe. The one negative thing with the H1n is that if you record while holding it in your hand, and rub against the plastic by moving your fingers, the sound is picked up pretty badly by the mics, so I tend to use it’s little tripod or mount it to the camera as much as possible.

Number 11 in the photo is my 1.4X Extender. When there is wildlife to be photographed I’ll also take my 2.0X Extender, but for I won’t need it. Behind that is my filter case, with a circular polarizer, and 3, 6 and 10 stop Neutral Density filters from Breakthrough Photography. Number 12 on my list is my Canon Remote Timer which I use really just a cable release these days, as there is a timer inside my cameras which is pretty easy to use.

Number 13 is my Canon GP-E2 GPS device to tag my images and create a GPS log of my tours for my guests. This is built-in on most other recent Canon cameras now, so it’s a shame that they decided to leave it out of the 5Ds bodies.

Number 14 is my amazing little Bergeon 5733 air blower. This is, without doubt, the best air blower I’ve ever owned, with a really strong air blast in a really small body. The only problem with this blower is that it gets quite hard when it’s below freezing, but I imagine that most rubber blowers do. And at least it doesn’t rupture when cold, so I’ve been very happy with it.

OK, so that’s actually fifteen items including my filters which were not numbered, or sixteen if we count the RRS tripod. The bag is a Guragear Bataflae 18L but they are no longer made, so I can’t provide a link for that. I’m about to zip this bag up and put my 13-inch MacBook Pro and iPad Pro in the back compartment and head off. I did not have time to create a podcast for next week, so I’ll see you in two weeks time after returning from Morocco.

See you on the flip-side!

Links to all the gear I mentioned today are embedded in the above text. By using these links you help to support the podcast at no extra cost to yourself.

Get this post's short-link:
← Big Changes to the Podcast Format (Podcast 638) Warning to Photographers Traveling to Morocco! (Podcast 640) →
Become a Patron