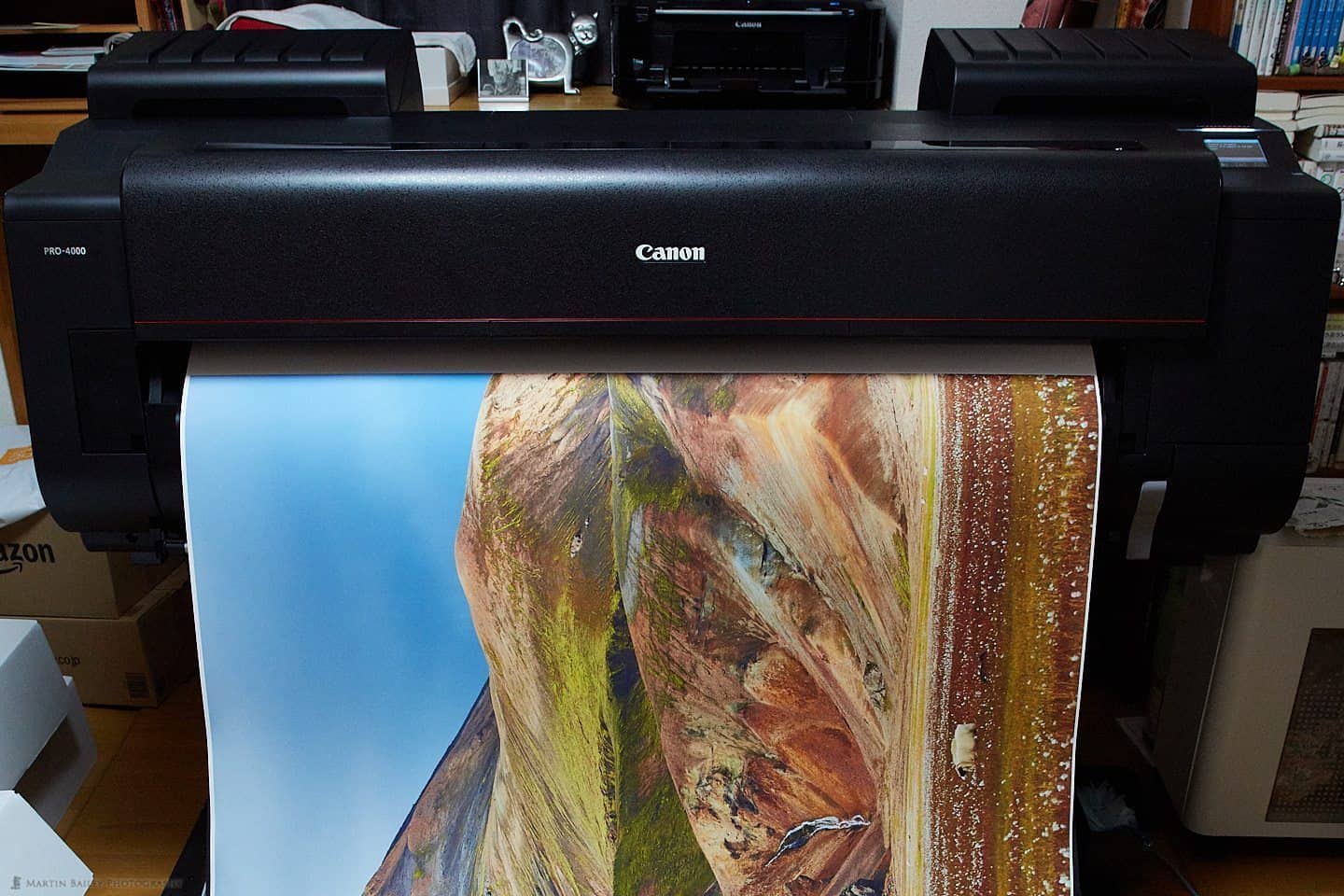 After three months of running at full speed, last week I needed a rest. Not being one for just sitting down and doing nothing, I changed gears and gave myself a week to make some background music for a video I’d put together to show some of the large format prints emerging from the printer, the work involved in setting up the gallery space, and a sneak peek at Canon’s exclusive showroom and museum space in their headquarters.

This week’s audio podcast is primarily to tell you that the video is ready to watch and provide a gallery of the 10 images that I displayed in the exhibit at Canon’s Headquarters so that you can see them in detail. I’ll also go on to explain more about my backstory, and why creating the music was my way of relaxing, just in case you are interested, so I guess there are almost two podcasts in one this week, but only the video is really photography related.

So, first here is the video, which I hope you enjoy. It’s in 4K but shot with my iPhone 7 and for most of the footage was using a DJI Osmo Mobile to help keep the camera steady. I actually found that the DJI software camera was a little bit jerky at times, and had some fun with the white balance in the showroom too, but hopefully, that won’t spoil it too much for you.

Note that I discussed many of the aspects of this project including my choice of media, some printing tips, and other information is last week’s episode if you are interested. Please also read on below for the gallery of images and backstory on the music project.

Here are the ten images that I displayed. Click on a thumbnail to open the lightbox viewer.

To give you a bit of backstory on why the music is my way to relax; eight years ago when I incorporated my company, and photography became my day-job, I felt, to a degree, that I needed a hobby again. Of course, photography is still an amazing form of stress relief for me. But it’s not always possible to go out and shoot, and that’s where music comes in.

I’ve been around music as long as photography when I think about it. I had guitars as a kid, and played the sax and sang in a blues band when I was 18 or 19, and since played the didgeridoo for a while, as well as the harmonica. I just love tinkering with music, so when I found myself with a little downtime as I recovered from my brain tumor surgery in 2011 I decided to buy an electric piano, and continue to pursue my secondary passion of making music. I still don’t play the piano well, but I can play enough to string together chords that I find pleasing and enough to punch those into my computer. On and off since 2011, when I get a little spare time, I often either study music theory, or I’ll practice the keyboard or drum pads, and this has become my way of relaxing in the evenings or when getting out with the camera isn’t practical.

With the Hokkaido tours, then working on the Canon Headquarters exhibit while catching up on business kept me incredibly busy from the beginning of January until the first week in April, and I really needed a break. You will have noticed that I have missed my release schedule a few times over the last couple of weeks, and this is part of the reason, but the reason for missing last week, is because I simply decided to cut myself some slack, and just make some music.

For those of you that actually make music, my results are probably laughable, but it felt great to just get my urgent communication out of the way each day, then just sit in front of my DAW (Digital Audio Workstation) and mess around. I started by very geekily recording the sound of my Canon imagePROGRAF PRO-4000 printer printing, and created a drum set of various samples of the printer sounds to use for the drum track. Then worked on a few different chord sequences and built out the other parts, gradually building up my eight-minute background music for the video that I had edited down in a few hours a week ago.

As I say, the music isn’t brilliant, but it served its function, and now, a week on, I’m totally refreshed and happy to have spent the time to create this. I actually should spend a few more days on it to really polish it up, but this week I have a bunch of other stuff to do, and can’t afford to spend that time, so you’ll have to suffer the three quarter complete version, or turn your speakers down as you enjoy the main feature for this week, which is the resulting video.

In case anyone is interested, the DAW software I use is Ableton Live 10, and for the background music for this video, I used the native Ableton Live drum rack and sampler features to create 16 drum samples based on the sounds of the Canon imagePROGRAF PRO-4000. I dare say this is probably the only digital drum rack in the world based exclusively on the sound of a printer. 🙂

In addition, I used the following plugins, in order of appearance:

I won’t bore you with more details on the actual production, but I thought you might be interested in my reasoning, and again, this doesn’t mean that photography is any less important to me. I’m not sure it would be a very interesting life if we were restricted to just one interest, and I’m sure many of you have other ways to relax outside of your photography. In fact, just for fun, how about leaving a comment below and letting me know what you do to relax, whether photography is your day-job or not. I’d love to hear from you.

You can view the video on Vimeo here.

Get this post's short-link:
← Exhibition at Canon Campus plus Showroom and Museum Visit (Podcast 614) Life Happens in COLOR with Nancy Lehrer (Podcast 616) →
Become a Patron