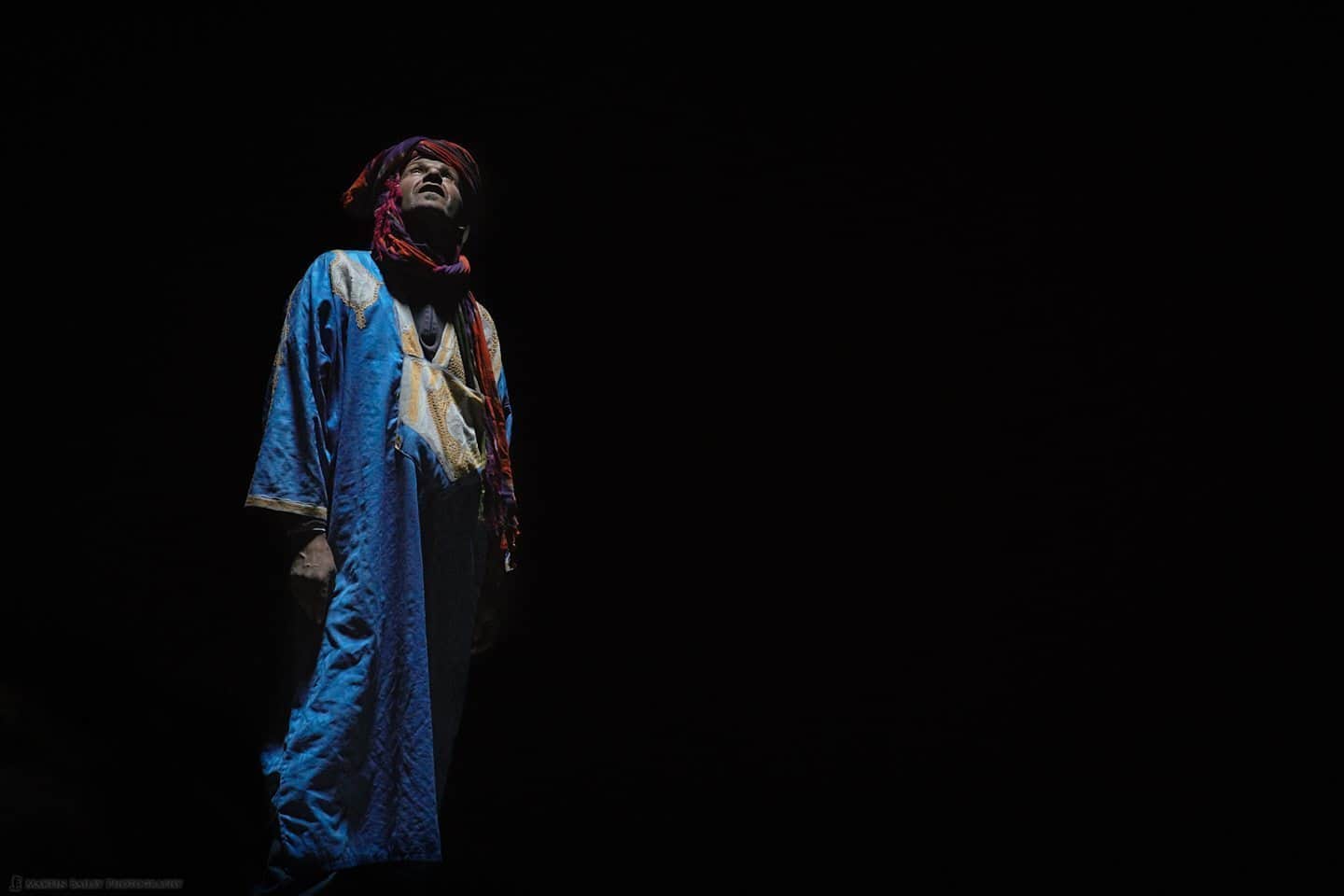 Today we conclude our Morocco 2017 tour travelogue series, with some beautiful portrait opportunities and a visit to the incredible Portuguese cistern at El Jadida.

On our second morning waking from our luxury tents in the Moroccan Sahara, I ventured back out again with a few early risers to capture the desert once more. This was the area where the grasses had got in the way a little, but the soft light before sunrise helps to outline the form of the sand dunes. Although photographically I wasn’t awestruck by this spot, it’s always nice to be out at dawn, and watching the sunrise to the left of this scene, over the border between Morocco and Algeria, is something that will stay with me.

For this photograph, I was using my 100-400mm lens at 330mm, and my aperture set to f/14, for a shutter speed of 25 seconds at ISO 100. That long shutter speed should be an indication that it was basically still quite dark, around 20 minutes before sunrise. I wasn’t using a neutral density filter or anything, this was just the ambient light level.

Man in the Well

After breakfast, we were sped across the desert in three 4×4 vehicles for an hour back to Erfoud and our tour bus and then continued on our journey to Ouarzazate.

On the way, we stopped at a site where there was a series of wells in an underground irrigation system and were fortunate enough to be able to photograph a gentleman named Karim, who you can see in this next image (left).

Karim here is looking up from the underground tunnel into the mouth of the well. I absolutely love this photo, and it’s become one of my favorites from the trip.

As a photograph, this was just about possible, technically. My ISO was at 6400, and my focal length at 105mm and an aperture of f/4. I have actually now got the new Canon 85mm f/1.4 lens with Image Stabilization and will be releasing a review very soon, but I’d have loved that lens down in this well, for the extra three stops of light that the f/1.4 aperture would have given me, and at this distance, I’d still have around 8 inches of depth of field too.

I also shot a few images including Karim’s feet, but unfortunately, he was wearing regular training shoes, and it didn’t quite match the rest of his clothing, so in this frame, I purposefully cropped off his feet.

After spending the night in Ouarzazate, we visited a beautiful little ighrem, or fortified village called Aït Benhaddou. In this next photograph (below), you can see the village with a bit of a reflection in the shallow river that flows beside the village. This was a 1/30 of a second exposure, so the woman carrying the sack of grain is a little bit blurred, I like the fact that she’s there to add a human element, although quite small and not noticeable at first.

We walked across the river and were hoping to get some photos from a slightly different angle when a tourist drove a car and parked right in front of the village, kind of putting the mockers on our plans, but that’s life. We did a group photo with the village in back, and then walked up into the village.

The moon was still in the sky as a few of us stopped at a cafe for some Moroccan tea, so I put my 100-400mm lens on my camera for this next photograph (below), shortly before the moon hid behind the hill. We actually stopped for tea a little earlier than this, but a huge group of tourists was looking out over the rampart and walking down the track, so I waited until just this one man in a traditional hat was looking out, just before the moon hid.

It’s a little bit touristy, but I quite like this, and of course, the 100-400mm lens, at 360mm, helped to make the moon look nice and big in the frame. My aperture was at f/10 for a 1/400 of a second exposure at ISO 200. I had actually gone back to Manual exposure for this shot, still struggling with exposure compensation in aperture priority. I just don’t like messing around with exposure compensation and prefer to take full control when possible.

After we finished our tea at the cafe, we were treated by more tea in a gentleman’s house, arranged by our wonderful guide.  The gentleman you can see in the following photos (below) is Jamal Eddine Mohammed and his ancestors have lived in this building since the 15th or 16th century.

The light from the window to his left, my right, was absolutely stunning, pouring into the room like Rembrandt light, so I was very happy that this gentleman was open to us photographing him. I set my aperture to f/5.6 for the first shot and f/8 for the second, both at ISO6400.

After drinking our tea, we were able to find a nice building across the way with some light coming in through the roof and were able to do another quick session with this gentleman in there too, as you can see in the next photograph (right).

At ISO 6400 my shutter speed was down to 1/60 of a second for this photograph, but it came out great, and none of these photos have any grain in them to speak of. It really is amazing what our cameras can capture these days. Even if we’d been able to set up a shoot like this a few years ago, the camera’s wouldn’t have been able to handle the low light.

These photos along with the man in the well from earlier are some of my favorite photos from the trip, and I can see at least one or two of them making it into my personal top ten favorite images for the year when I go through that exercise in just three or four weeks time now.

After our wonderful experience in Aït Benhaddou, we continued our journey on to Marrakesh, where we ventured into the square for a few hours. A somewhat hectic place, where every street pedlar was trying to get us to buy something, and even just raising your camera had people coming over asking for money, but it was a fun experience.

As a group, we paid some snake charmers to allow us to photograph them, and the most dynamic among them was quickly bitten on his ear, luckily only be a water snake, but it got the rest of the snake charmers laughing. Personally, I didn’t enjoy this, as they were throwing the snakes around and treating them badly, so although I have a few photos, I’m not going to share them.

The following day we spent more time in the morning walking through the markets of Marrakesh. As you can see in this photo (below) there were some beautiful streets, with lovely wooden doors on each of the stores. The man in the store to the left of this scene came rushing out every few seconds to tell us not to photograph him, and it was all that we could do to grab a shot like this before he stuck his head out again.

I do wish people were a little more tolerant of photography. I understand that in many ways, the reason is that people come with cameras, take only photographs and don’t buy from these stores very often, and I wonder how tolerant other countries would be too. As a group though, I think we did our fair share of spending, which all helps to improve the economy, which in turn helps all Moroccans, so I wish people would go a little easier on us with regards to photography. Having said that, I thoroughly enjoyed this tour, and I am planning to do it again.

On the final day of shooting, we had a drive back to Casablanca, via the port town of El Jadida, where we visited the beautiful Portuguese Cistern, which you can see in this photo (below). Again shot at ISO 6400, this and the following image do have a little bit of grain in the shadow areas, because I increased the brightness a bit.

My strategy with the exposure was to go a little over on the hole in the ceiling, and then I brought that down with the levels in post, and boosted the shadows by increasing the shadow slider in Capture One Pro to 30, and also increased the shadows a little bit with the Luma Curve. I didn’t want to open the shadows up too much, as that would look unnatural, and increase the grain further.

For this final image from the tour (below), we had our guide stand in the light, which lit him so brightly compared to the surroundings that there’s actually a little bit of a starburst effect coming off his hand when you view the image large.

Still shooting at ISO 6400, I was able to get a shutter speed of 1/125 of a second at f/8. I kind of wished I’d gone to Manual mode and reduced the shutter speed a little more, but I was back to trying to work in Aperture Priority, and kind of messed that up. The photos are fine though, and I really like the feel of this image.

The Cistern was a beautiful place to finish our tour. We walked down to the coast afterward and then went for lunch before the relatively short remaining drive to Casablanca. That evening after dinner, a few of us found ourselves in Rick’s Cafe, which was only built in memory of the movie Casablanca, that was actually filmed at studios in Burbank, California.

Although we had some members of the group that didn’t want to leave a comment in my traditional final recording, I’m going to play you the comments from those that did say something now, before we wrap this up.

[Please listen with the audio player at the top of the post to hear what people said about the trip.]

OK, so thanks for listening for the last four weeks as we’ve followed along with my two-week trip, and a total of 44 images. I hope you’ve enjoyed it.