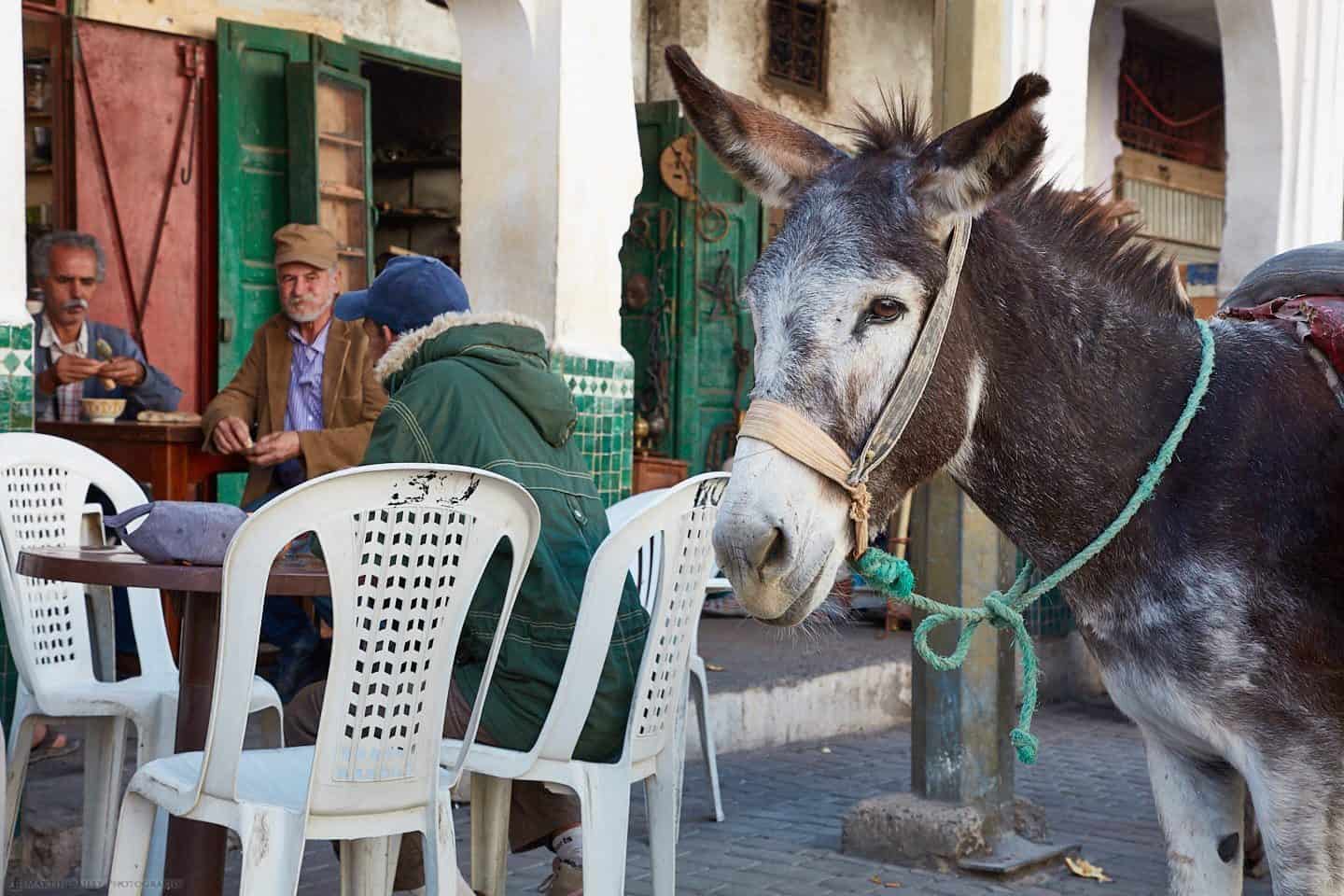 Just back from my first tour of Morocco, this week we continue our series of travelogues to walk you through our antics in this majestic north-western corner of Africa.

Having just about finished my edit of my photos, I now have around fifty in a collection, so I’ll continue to whittle that down to forty so that we can complete this series in four episodes. We pick up the trail as we leave the beautiful blue city of Chefchaouen, and made our way to Fes.

We had lunch near Meknes, outside a barbeque style restaurant, and I recall this as perhaps one of the best meals I had in Morocco. The food was seasoned perfectly for my tastes. As we walked to the bus to continue our journey, I grabbed this photo of a donkey tied up outside another restaurant, waiting patiently for his master to finish his meal (below).

This is more a documentary photo, but I liked the relationship between the donkey and the men eating. Donkeys seem to play an important part in the lives of the Moroccans that live and work in the medinas and small towns. We’d sometimes be walking through an alleyway and have to move to the side to let a donkey through, often carrying huge loads, like gallons of water or gas canisters stacked high. 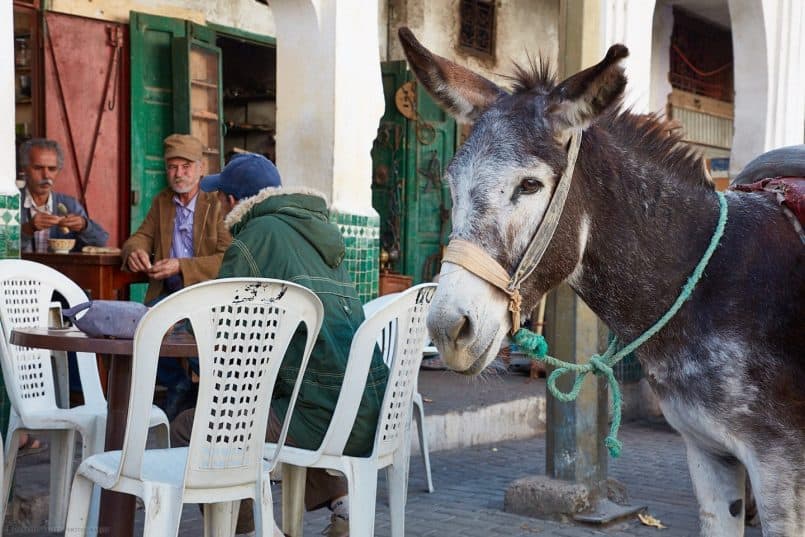 After this, we continued our journey and stopped at the ruins of a Roman town at Volubilis. I have to admit, this is one of the locations that was recommended to me that I was not very impressed with. If I was a tourist, I’d probably stop by to check it out, but as a photographer, wanting to make beautiful photographs, it probably wasn’t the best use of our time, so we’ll most likely be skipping this next year, and head straight to Fes.

As we were there though, I tried to make something of our visit and found an angle to photograph this archway with the sun poking through a corner in the stone forming a sunburst (below). It’s actually a UNESCO World Heritage site, so I wished I’d found it more interesting, but I don’t think I was the only one that didn’t really appreciate this stop. 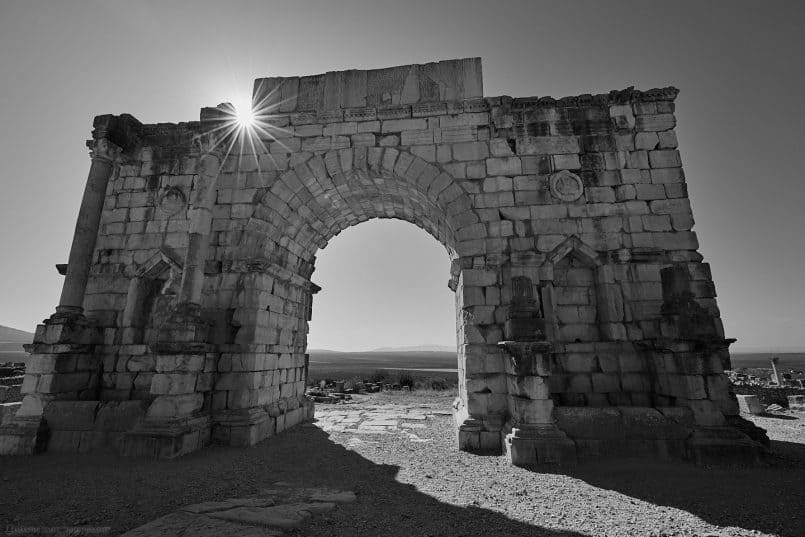 I converted this image to black and white in Capture One Pro, as the sandstone colors didn’t really work for me either. The sunburst is more a product of forcing the sun’s light through a corner, but I did also have the aperture set to f/14, which probably helped somewhat as well, although I’ve done sunburst shots at f/8 in the past. 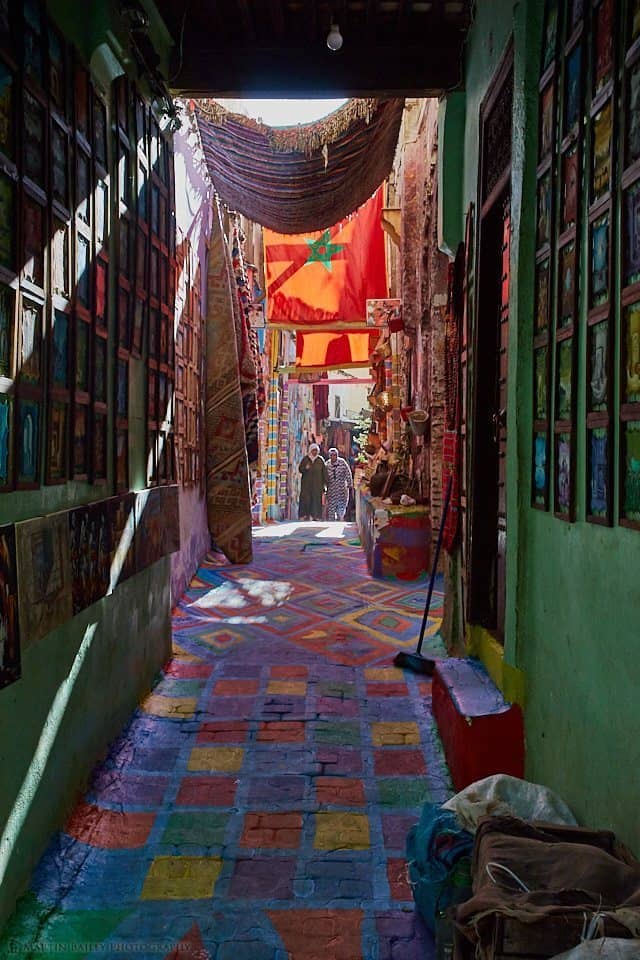 We went to a location to enjoy a view of Fes at sundown after this, and then the following morning ventured into the medina, which is over 1200 years old and has around 9,000 alleys, one of which you can see in this next photograph (right).

Again, I’m trying to respect the wishes of the local people to not be photographed, but at a distance, the two women obviously have a heavy presence in this shot. The visual mass of the human form is always somewhat larger than the actual percentage of area that it takes up in the image.

I found this alleyway to be absolutely beautiful though. As I mentioned last week, on this trip I was working in Aperture Priority quite a lot. It was frustrating at first because I’m not used to any automated exposure modes, but as the light changed so much, such as when we shot into a side street alley like this, Aperture Priority and Auto-ISO was pretty helpful once I got used to it.

I had also set my minimum shutter speed to 1/250 of a second, in a bid to freeze any action that might be happening, and was glad for that setting a lot of the time. The downside is that when there isn’t much movement, like in this shot, my ISO still jumped up to 2500 to give me a 1/320 of a second exposure at f/11. Luckily though, even the 5Ds R does great, even with ISOs up to 6400, as long as you expose the image as bright as possible, protecting your highlights, and not letting the shadows plug-up too much.

After this, we made our way over to the tannery, which is a site that perhaps has to be experienced to really grasp the atmosphere. We were given a sprig of mint on our way into a building, then we climbed its stairs to around the fifth floor, to come out on a balcony with the view that you can see in this image (below). 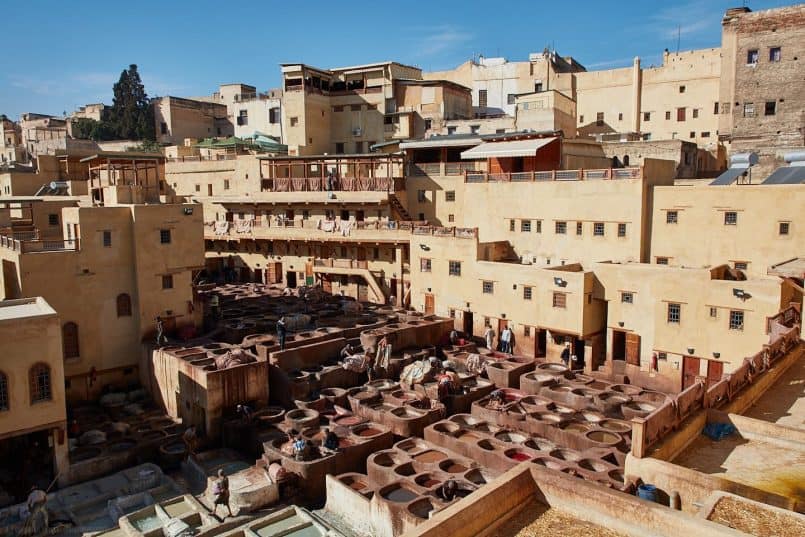 Although I didn’t really find it that bad, apparently the smell was quite strong, so many of the tour participants had their mint sprig in their nostrils as we picked out and composed our photographs. I went wide for this first image to show how the tannery is enveloped in the surrounding buildings, and also to show how many people were working there at any one time.

For this second image from the tannery (below), I zoomed in to capture just one worker, standing in one of the vats with the liquid up past his knees. The content of some of these vats are natural, like the red color from pomegranate skin, but some of them can apparently be a little toxic, although that doesn’t seem to stop the workers from getting in with their bare legs. 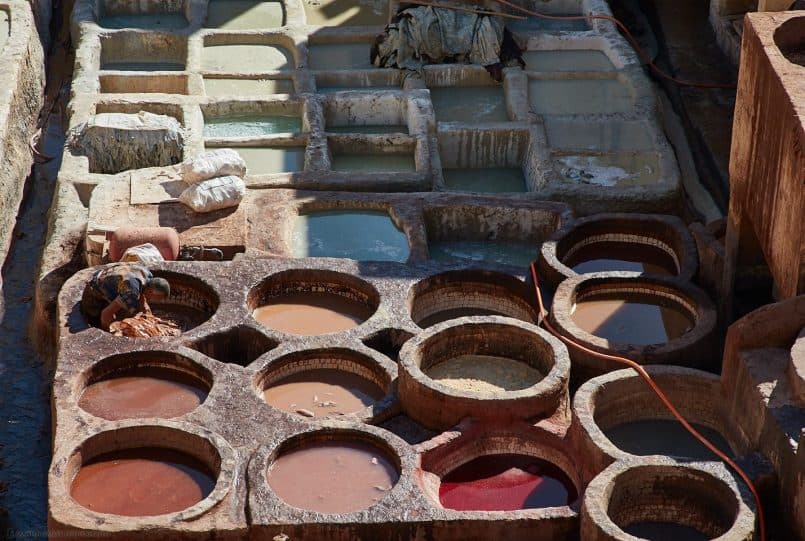 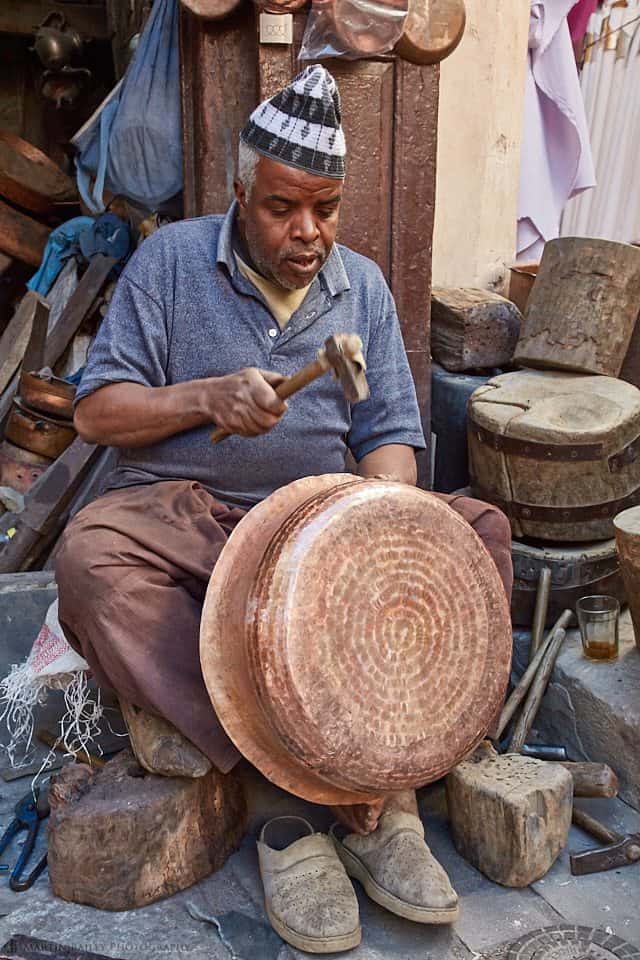 The name of the Fes hat comes from the fact that they were made in Fes, and craftsmanship seems to be a big part of the Fes culture. We photographed this man hammering away at his copper pan.

He, and a younger man, possibly an apprentice, put on a bit of a show after this, where they both hammered at the same pan making a nice rhythmical beat. Not a great photo opportunity, but I shot some video of this which may find it’s way into a slideshow of my Morocco work, as time allows.

We continued photographing in the alleys of Fes, and I have a number of other images that I’m happy with. There was some craftsman dying silk made from the agave plant, which is used to make tequila, and we also visited a pottery workshop and watched some of the people there painting the plates, and also creating the incredibly intricate and ornate mosaics that play such a big part in the Moroccan culture.

We also had lunch in a restaurant that was absolutely gorgeous, and yet from outside it was just another sand colored alleyway, which made us think about how deceiving the exteriors of some of the buildings can be.

The following day, we left Fes and wound our way through the Middle Atlas Mountains heading to Erfoud. The locations that we visit are spread out, and some of the days are spent mostly on the bus, although we sometimes made planned stops to give ourselves a chance to stretch our legs. Sometimes though, we just see something that looks interesting so we’d see if it was possible to stop to photograph it, as was the case with this next image (below). 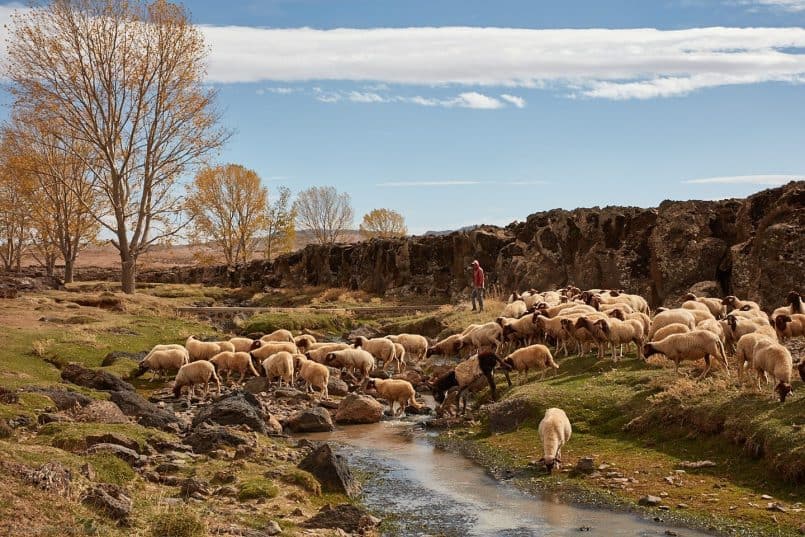 Shepherd with Sheep and Mountain Stream

As we rounded a bend having just crossed a small stream, I noticed the young shepherd in this photograph with his sheep, walking across an expanse of land. That alone would have been nice to photograph, but he was open to walking his sheep back over to the mountain stream so that we could photograph them there instead.

I’m happy with this image, as it shows a man at work in nature, in one of the oldest professions we have, giving it an almost biblical feel. I recall spending a few moments struggling with Aperture Priority here, and quickly jumped back into Manual, as the light was not challenging like it is when one minute you are photographing a light street, then the next minute photographing down a dark alley.

I stayed in Manual as we pulled up to photograph a kasbah, which in this case means a storehouse or keep for farm produce, as the sun shone down into the valley for the last few minutes before it would cast it fully into shadow (below). 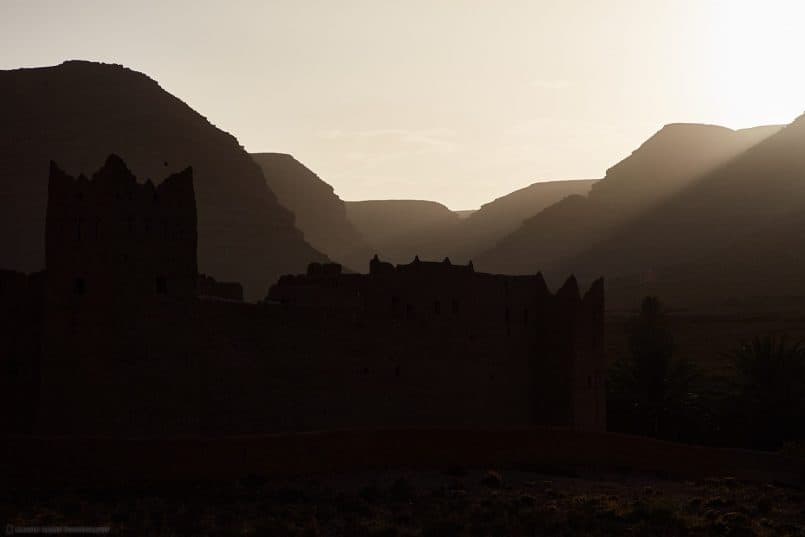 I purposefully let the adobe kasbah fall into almost full silhouette, so that you have to work a little to see any detail in the building, but it is there if you look close. I like the layers that this exposure gives us in the mountains with the suns rays creating another layer to the right.

In front of the kasbah, there were two men and a woman working with the corn. As is often the case, the men were actually just sitting around, and the woman was doing most of the work, peeling the outer leaves off the corn and throwing it into a large circular area that they’d made, obviously wanting to dry out the corn to help preserve it for the winter.

We were able to photograph these three people, but I’ve dropped their photographs into a single image as a tryptic (below) to share with you today, as I don’t have much to say about each individual image. The man in the blue turban just sat for us, and the guy in the orange spent most of his time with his hand out, waiting for his tip, which kind of spoils the experience a little, but I quite like the photo. 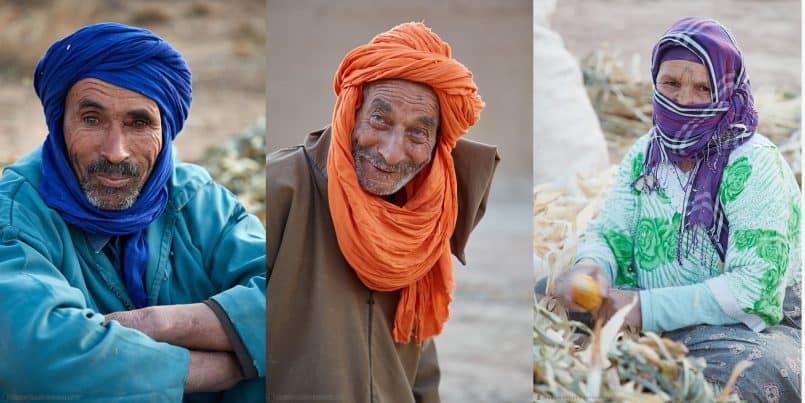 We can see from the tattoo on the lady’s forehead that she is a Berber, an ethnic group from Northern Africa. They apparently tattooed the girls in the family to stop them from being stolen, or to at least be able to identify them as their own family if they were stolen. 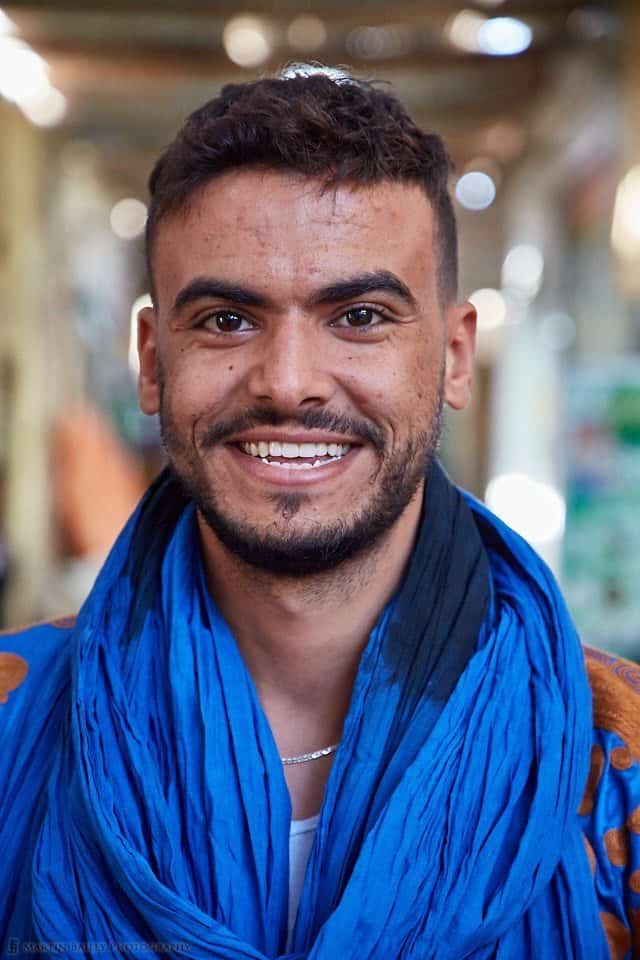 We stayed in a wonderful hotel in Erfoud on this day, before visiting a market the following morning, and had a wander around photographing the people there.

The handsome young man in this photograph was particularly persistent, telling me that my wife would love one of his scarves. I have a wider shot of him in which you can see the scarves, and I asked my wife if she’s have liked any of them, and confirmed as I thought that she did not.

So, I made the right decision on this occasion, by giving him some money for his photograph instead. There wasn’t a lot of light in this market, so this was shot at ISO 6400 at f/4.5 with a shutter speed of 1/160 of a second.

As I mentioned last week, as much as I love the new 24-105mm f/4 lens for its versatility, I’m thinking to get the new 85mm f/1.4 IS lens when it comes out, as it will be invaluable for some of this street portraiture in Morocco during next year’s trip, and for other photography as well of course.

We’ll pick up the trail next week as we head into the Sahara for two nights, to photograph our camel handler models, as well as perhaps the best portraits of the trip. 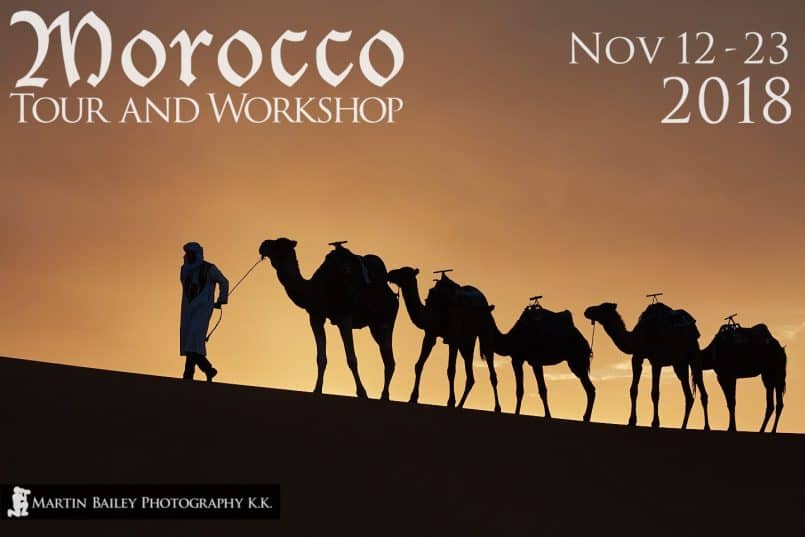