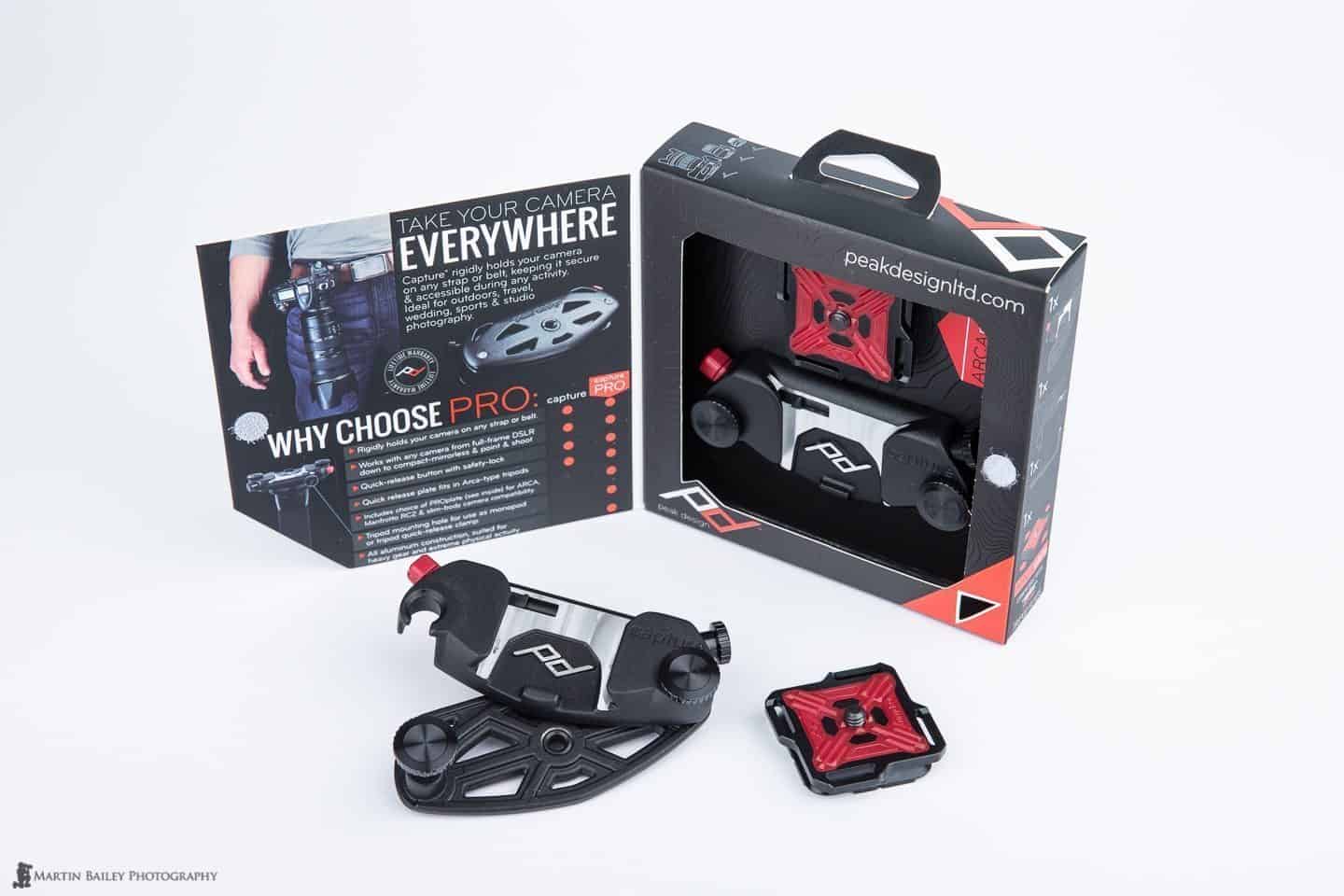 The CapturePRO from Peak Design (Podcast 394)

A number of months ago, I backed a Kickstarter project, to help a company called Peak Design bring the version 2 of their Capture camera clip system to market. After the team spent a little more time than they expected to iron out some international shipping logistics, my order with my backing, containing two CapturePRO clips and a PROpad arrived recently, so today I’m going to walk you through this great system and how it will work into my overall camera support strategy.

The key component of this system is the Capture camera clip, which comes in two flavors; the standard Capture and the CapturePRO. The advantage of the PRO version is that it comes with your choice of Pro Plate, which has an anti-rotation rubber surface and a D-Ring so that you can attach a sling style strap like the Black Rapid, which we’ll look at later. It also has a screw thread in the base so you can use it as a quick release clamp if necessary too. As you can see from this photo (below) the packaging for the CapturePRO is pretty good, especially for a company still relatively young.

NOTE: After releasing this Podcast, the Peak Design Team sent us an Affiliate Link that saves you 10% of all purchases! Please use this link https://mbp.ac/pd10 to apply the coupon or enter mbp10 on checkout. 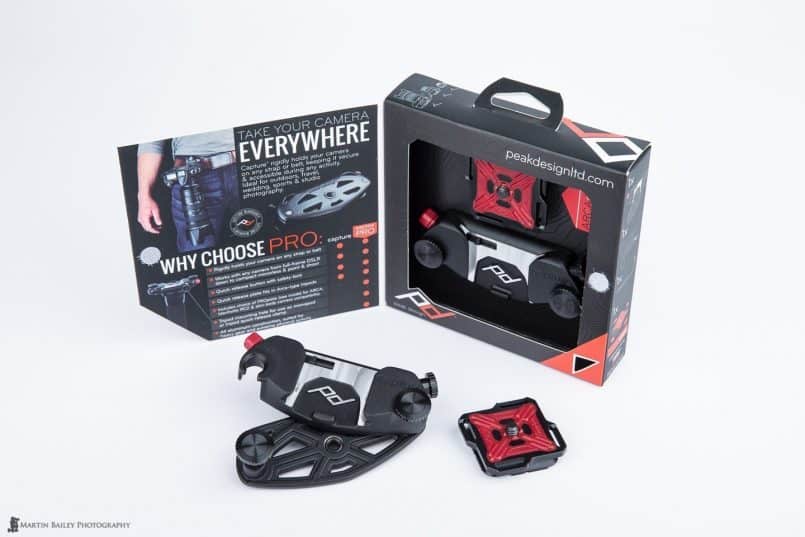 Both Capture and CapturePRO clips come with a microfiber pouch to store the clip in, and a 4mm hex key. This is a very small detail, but I love the fact that the hex key has a ring on it, so I could tie this to something, or even attach it to a camera strap or the key clip in my camera bag. The Peak Design team also probably made a conscious decision to go with the 14mm size because this is the same size that Really Right Stuff use for their clamps, so we don’t have to carry multiple hex keys around. 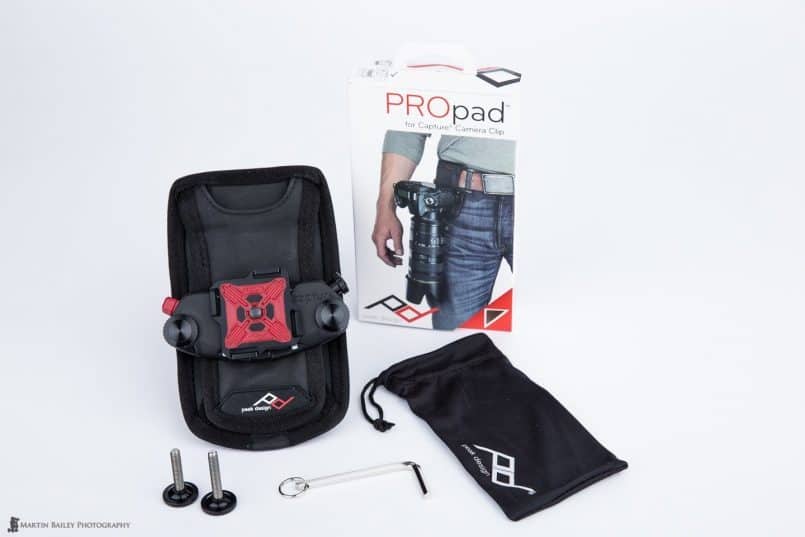 I also chose a PROpad, which is an accessory that enables you to attach the clip more comfortably to a belt or ruck sack strap, especially if you are going to be carrying large cameras around. We’ll take a look at this in more detail soon too. First, here’s a photo (below) of the CapturePRO attached to my Gura Gear Bataflae backpack camera bag. 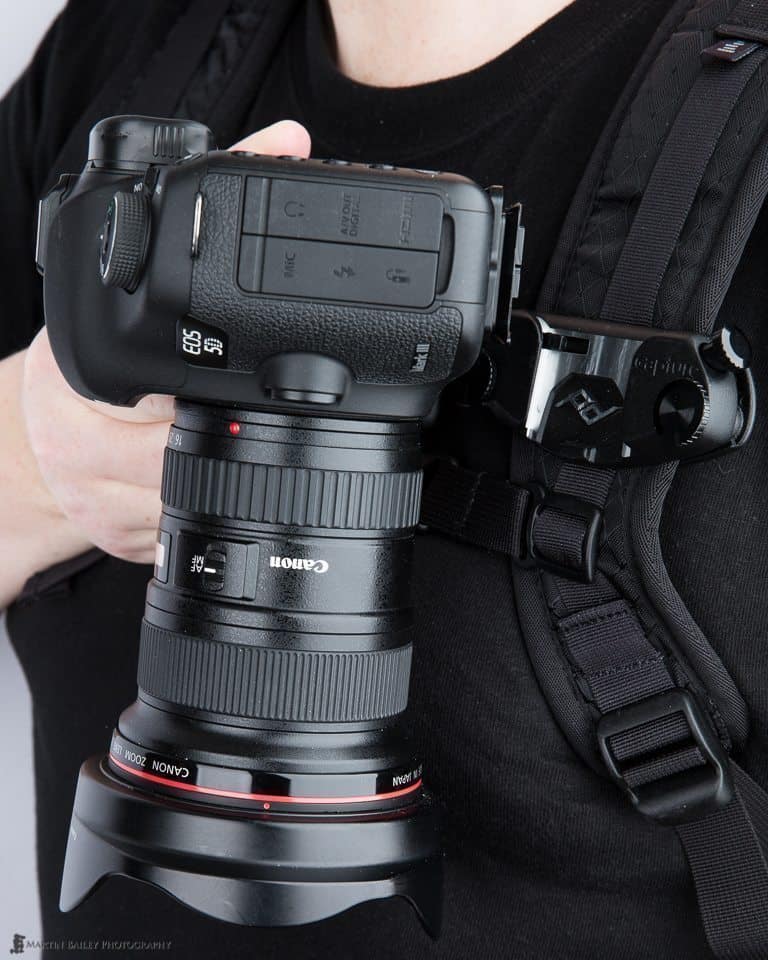 This is the first clip system I’ve used, and I was pleasantly surprised at how easy it is to clip the camera into the CapturePRO clip. There’s a nice reassuring click as the safety catch locks into place, and to remove the camera, you have to push the red button, which you can see in the earlier photos.

For extra safety, you can turn the plate lock screw on the top right of the clip, to lock the camera plate firmly into the clip, so it won’t come out if you accidentally push the red button.

Another great safety feature though, is if you rotate the red button 90 degrees, you can no longer push it in to remove the camera. This gives you an extra level of reassurance.

Peak Design have also created a leash, simply called Leash, and a wrist strap they called the Cuff. I will consider picking up the Leash at some point as I really see how this system fits into my shooting workflow, but to start with, I’m using the clip without the leash, and so far have not had any issues.

In addition to attaching the clip to the shoulder straps of a rucksack, you can also attach it to the strap of a shoulder bag, or directly to your belt in a vertical position. Because the safety catch clicks in as you drop the camera into the clip, it doesn’t need to be oriented horizontally as I show it here, although I must admit the paranoid safety freak in me feels a little less anxious using the clip horizontally.

Here’s a photo of the PROpad attached to my belt (below left). Although you can loop the pad over your belt, I am passing my belt through the loop in the PROpad itself, for extra safety, especially when using the clip with large lenses like the 70-200mm f/2.8 lens that we see in the other shot here (bottom right).

The PROpad is well padded though, and is very comfortable even when carrying a large lens like this. Note though, if you have a tripod ring with an Arca-Swiss style plate on it, it gets in the way so you can’t easily drop the camera into the clip without rotating the tripod ring moving the plate out of the way, or removing the tripod ring altogether, which is an option if you know that you are not going to be using a tripod. 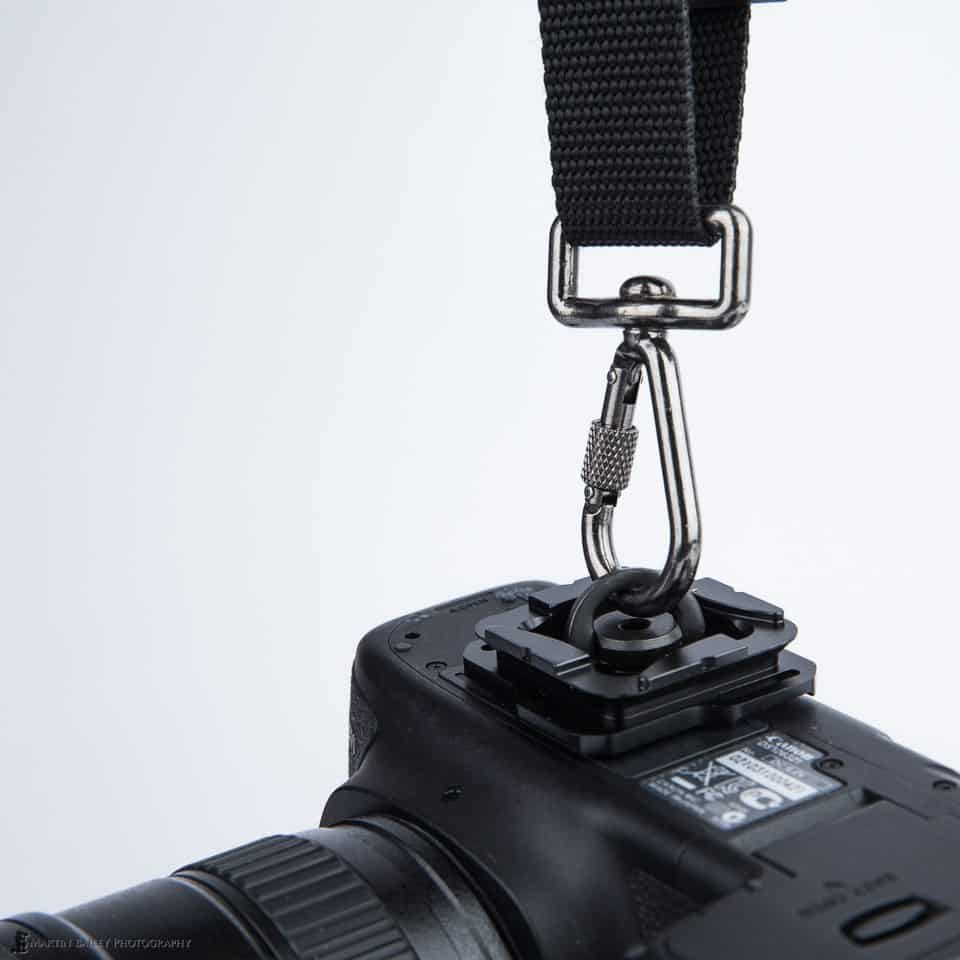 This is one of the reasons I bought two CapturePRO clips, so that I could put one on my rucksack shoulder strap and then the other on my belt using the PROpad for the longer lens. Also note that at the moment, I’m finding it more comfortable to use this system without the battery grip on my 5D Mark III. It can be used with the battery grip, but then the camera really sticks out from your chest, and just feels a bit awkward, although I’ll probably try and get used to that at some point.

My photography is very varied though, and I don’t see me trying to replace my current workflow entirely with the CapturePRO clip system. For example, the Leash can be used as a sling style camera strap, but despite the claims that it is comfortable even with heavy cameras, I just can’t see how that can be the case, especially when we are talking really heavy gear like a 300mm f/2.8 for example.

I’ll continue to use my Black Rapid straps, which are much wider, and when I’m doing my wildlife photography with much larger lenses, I will continue to use my Black Rapid Double Strap. As I mentioned earlier though, the nice thing about the ARCAplate that I chose with my CapturePRO is that it has a D-Ring as we can see in this photo (above right), that you can clip a Black Rapid strap through too, so the CapturePRO plays well with other systems. 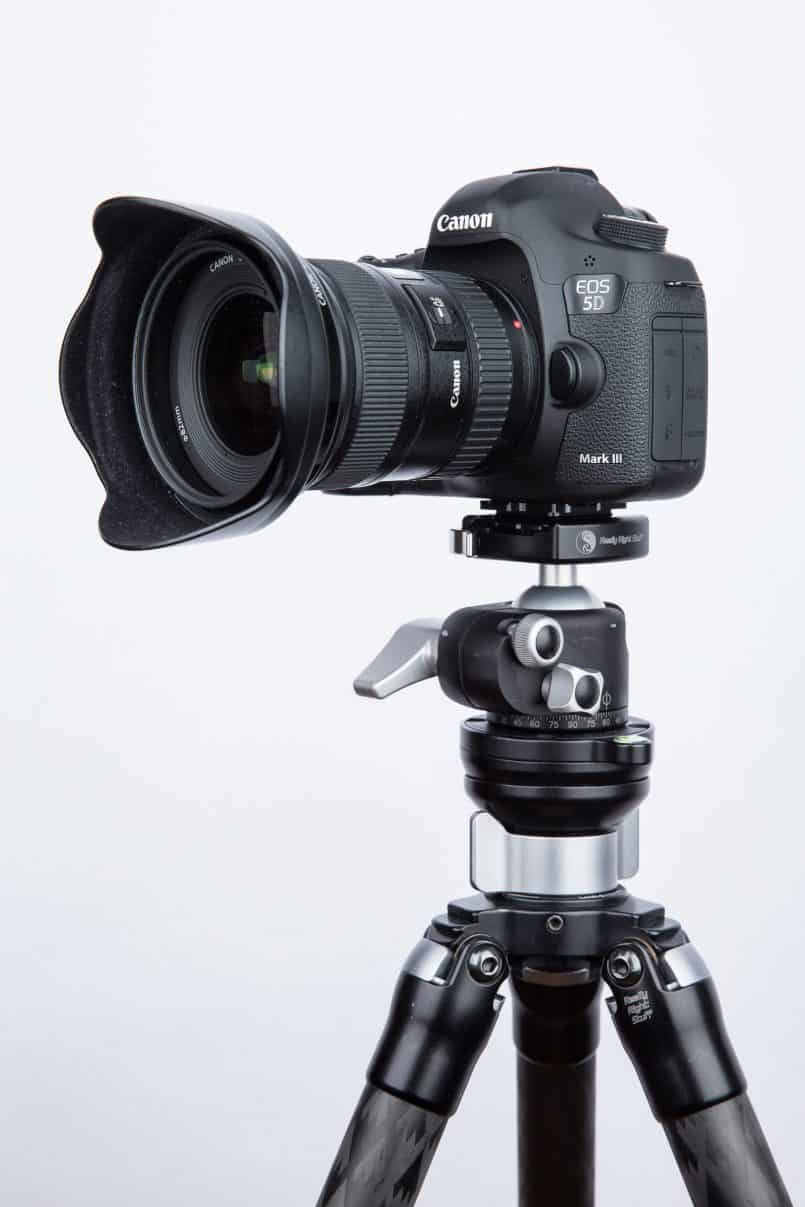 For example, because as the name implies the ARCAplate complies with the Arca-Swiss standard, I can attach the camera to my Really Right Stuff quick release plates without having to remove the CapturePRO ARCAplate.

As I say though, this is not going to fully replace my current workflow. There will be times when I want my battery grip on the 5D Mark III or I’m using the 1D X, and in these situations I’ll be using my Really Right Stuff L-Brackets, because I love the freedom to switch between portrait and landscape orientations without flipping the camera over on it’s side.

The 5D Mark III L-Bracket does have a screw thread, so I could attach the ARCAplate to the L-Bracket, but to be honest, once it starts to get that convoluted I lose interest. I want my workflow to work for me, not against me, so as I said earlier, there will be times when I feel that the CapturePRO is the way to go, and there will be times when I put it into its nice little microfiber pouch, and leave it in my camera bag.

That though, is another really nice part about the CapturePRO system, and why I have bought into it. It’s small enough to be able to drop in your bag, and use it when it makes sense, and then not have to worry too much about the additional size and weight when you don’t need it. After all, the CapturePRO clip itself weighs just 110g and the ARCAplate is 30g. Sure, you have to be careful of weight, especially when traveling internationally, but I’m sure you’ll agree that the benefits of the system more than make up for carrying this little extra.

I should also note too that although I’m aware of the Spider Holster system, and I think that the action of clipping the camera into the support is perhaps a little easier with the Spider, at least until you get used to the CapturePRO clip, the reason I have gone with the CapturePRO over the Spider Holster, is the Arca-Swiss compatibility. As I mentioned earlier, I have Really Right Stuff plates on all of my lenses and L-Brackets on my cameras. All of my tripods have Really Right Stuff quick release clamps including my Manfrotto video fluid head, which I mated with an RRS quick release to maintain full compatibility with my system. Although I’ll only be using CapturePRO when it makes sense, it’s important to me to be able to use it with my current range of camera supports, so this was the deciding factor. If you don’t have this consideration to bear in mind, then by all means take a look at the Spider Holster too. My friend Pete Leong swears by it, so I know it’s also a class product.

So, all in all I’m very happy with this new addition to my kit, and my first few ventures out with it have proved it very easy to use. It’s one of those technologies that quickly disappears into the background, so it’s definitely something that I’m happy to recommend with a big thumbs-up!

The Peak Design Team sent us an Affiliate Link that saves you 10% of all purchases! Please use this link https://mbp.ac/pd10 to apply the coupon or enter mbp10 on checkout.

Get this post's short-link:
← An Interview with Oded Wagenstein - The Visual Storyteller (Podcast 393) New Kid in on the Block - a 27" iMac (Podcast 395) →
Become a Patron