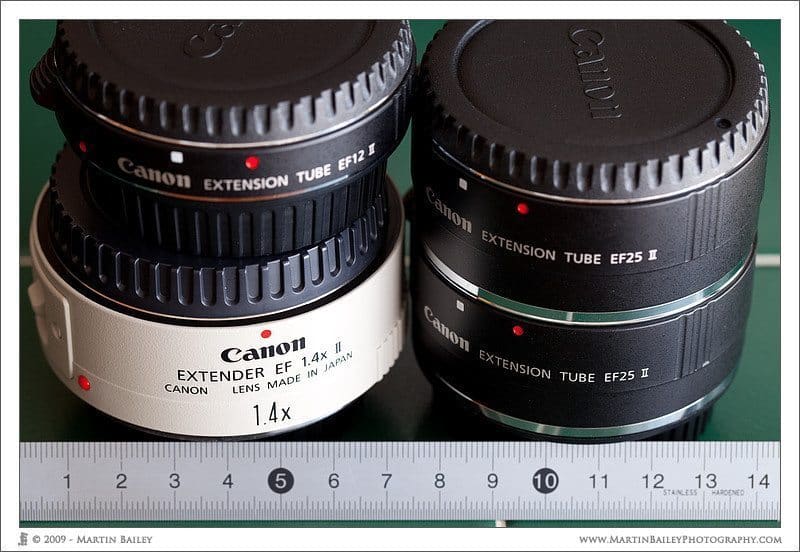 An Exercise in Magnification with Extension Tubes

Extension tubes are really handy. Because they have no glass elements, they aren’t very heavy, and you can couple two or three together and put them into one pouch, and they are no bigger than a small lens, so they fit in the photographer’s vest without taking up much room.

When you put an extension tube between the lens and the camera, your focus distance decreases, so you can focus on things closer than you would be able to without the tube. The caveat is that they also reduce the maximum focus distance, so once fitted, you can no longer focus on infinity.  The wider the lens, the more drastic the change in focus distance. With wide angle lenses, you almost touch your subject before you get it in focus. It can give you some fun effects, but not that practical. Tubes work best with 50 to 100mm lenses, or even with very long lenses that usually have very long minimum focus distances, to allow you to shoot small birds quite large in the frame. Many people use extension tubes for macro or close-up photography, to get larger than life-size, or 1:1 magnification.

Having just bought a second 25mm extension tube (Canon Extension Tube EF 25 II), to give me 50mm, or 62mm with the 12mm extension tube also fitted, and also after receiving a question on my Canon EF 100mm F2.8 L Hybrid IS Macro lens review blog post, I figured I’d do a few tests to see how the combined extension tubes and a Canon 1.4X Extender effect the magnification of the lens.

The 5D Mark II sensor dimensions are 24x36mm, the same size as a 35mm film frame. This means that when shooting at life-size, something that is 36mm wide would be 36mm on the sensor.

For my tests I cranked the focus back as far as it would go, and focused with focusing rails, to get as close as possible. The first thing I noticed as I framed the first test image is that the 100mm F2.8L IS MACRO lens actually focuses slightly larger than 1:1, or life-size, as the resulting image included just 34.5mm of a steel rule. This means that right off the bat, we are actually shooting at 1.04:1, but to show the effect of the extension tubes and 1.4X Extender, I’m going to use 1:1 as the base.

Here are the images, straight out of the camera, with no cropping or rotation or anything (though re-sized for Web of course).

First, just the straight 100mm F2.8 L IS MACRO lens, with nothing attached, giving us a slightly larger but as good as life-size image: 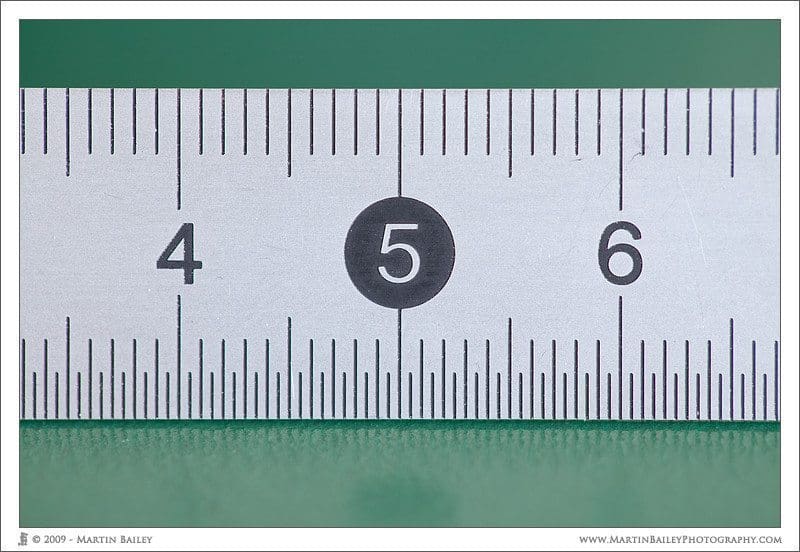 This is with one Canon 25mm extension tube attached. This results in 1.35:1 magnification (below): 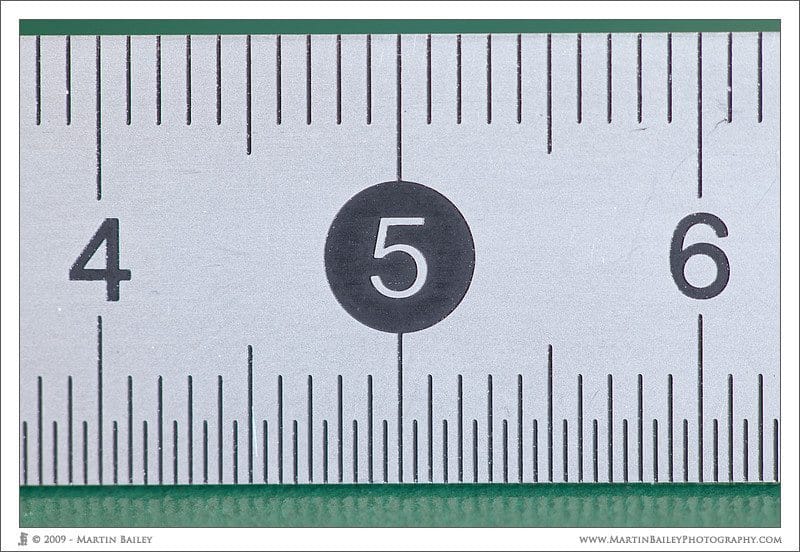 This is with two Canon 25mm extension tubes attached, giving us 50mm of extension. This results in 1.73:1 magnification (below): 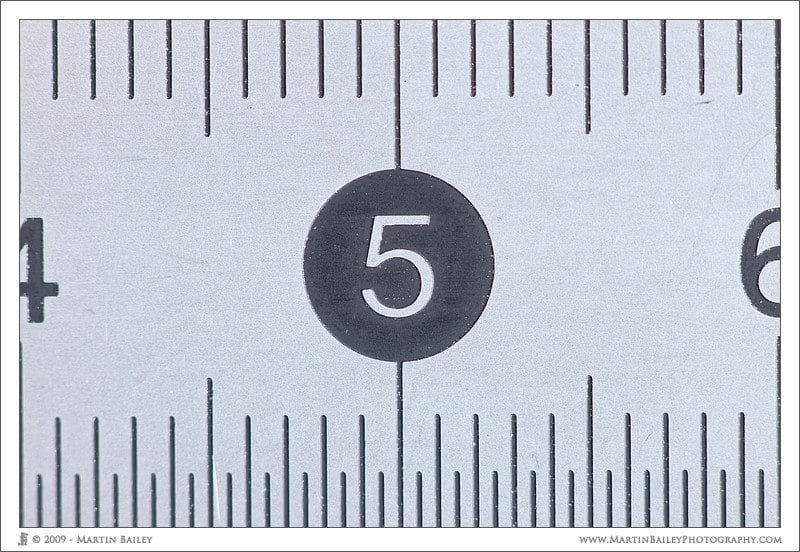 Next I added the Canon 12mm extension tube to the two 25mm tubes, giving us 62mm of extension. This results in 1.9:1 magnification (below): 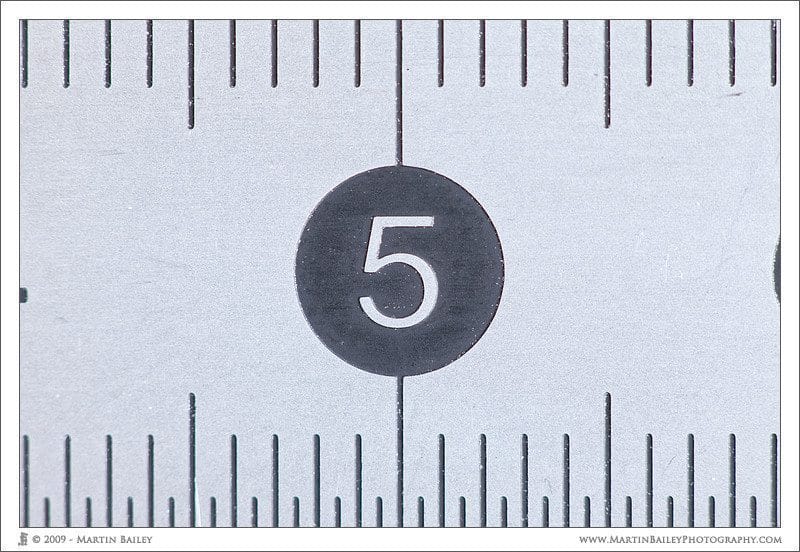 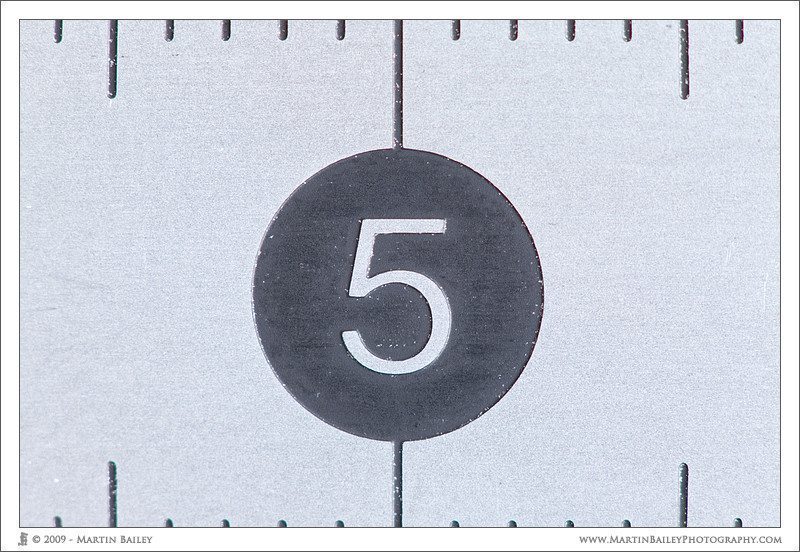 Note that the Extender doesn’t effect the minimum focus distant as tubes do, so for this last shot I didn’t have to crank the focusing rails, like in the other shots, though I did fine tune the focus.

Here’s a table of the results, for quick comparison.

Well, on the magnification front, you can get down to 1.9 and 2.7X magnification pretty easily, with stuff that you may well have with you anyway. I own the Canon Canon MP-E 65mm F2.8 1-5x Macro lens as well, but I don’t always take it out, unless I know I’m going to specifically shoot macro. Also, although I haven’t yet tested this, I’m sure the Hybrid IS works to a degree, even when shooting larger than life-size, so that is another advantage over the 65mm.

The whole setup does get pretty long with 62mm of tubes and the 1.4X Extender, which can be good for getting close to your subject, but also makes it a little more difficult to balance than the MP-E 65mm macro lens. One other benefit of the 100mm with tubes, is that you have some focusing leeway. With the MP-E 65, you have no focus mechanism as such, although you can increase or decrease magnification which does move the focus. Basically though, you have to use a focusing rail and move whole setup (camera and lens) back and forth to focus.

I didn’t use a controlled constant light-source, just shooting with ambient light in my kitchen, but one thing to note is that for each 25mm tube, I had to increase the exposure by 2/3 of a stop. The 12mm tube needed 1/3 of a stop, and the 1.4X magnifier required an extra stop of light to create images of the same exposure.

One other thing to note is that I was impressed with the image quality right through the range. The whole series are pretty impressively sharp, to say that I’m sticking a lot of distant and even glass with the 1.4X Extender, between the 100mm Macro lens and the camera.

I’m not sure that I’ll use all of these tubes and the 1.4X Extender in the field, but it’s good to know that it’s there as an option.

B&H carry stock of the equipment discussed here at rock-bottom prices. By all means compare with other vendors, but if the price is right, support this blog and podcast by buying from these links. I’ve never had a problem with anything I’ve bought from B&H and I highly recommend them.