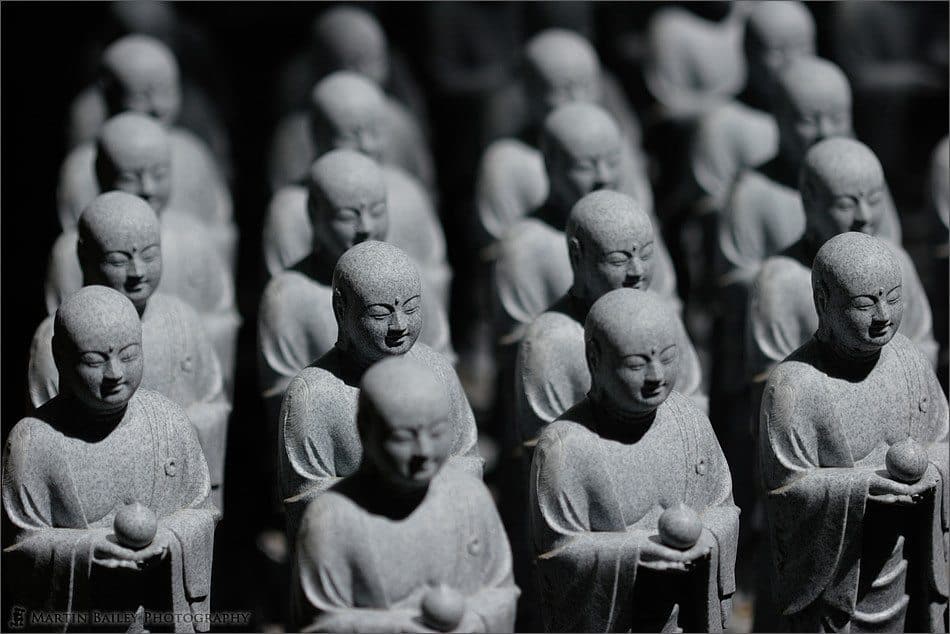 Here’s another episode from the archives, originally released on Sept 19, 2005.

Before we raise our camera to our eye or set it on a tripod, compose the shot and choose the aperture and shutter speed and release the shutter, it seems pretty obvious that we must first ‘see’ the shot, but this simple action is not always as easy as it seems. It’s surprising how many shots we walk straight passed each day, just because we don’t ‘see’ them.

Although I consider myself to have a pretty good eye for finding interesting subjects I was reminded of this yesterday while shooting in the Hamarikyuu Park here in Tokyo. I was walking along when I noticed a dragonfly fly past me. This was nothing strange. At this time of year there are thousands of dragonflies flying around. The thing with this dragonfly though that I felt happy I’d noticed was that it appeared to be carrying something. I couldn’t see what it was, but followed the dragonfly until it came to rest on a tree. I carefully walked over and crouched next to the tree and as I peered through my 100mm macro lens I saw that the dragonfly was starting to munch away on a small orange and black butterfly.

The first photograph today which is number 701 is what I saw. Remember you can see the photo in iTunes or your iPod, and also on my Web site, martinbaileyphotography.com. If you go to my site and find the Podcasts section near the top of the page you can enter the number into the black box and click the orange button to view the image in my online gallery. Today though I will talk about multiple photos, so it might be better to click on the orange Podcast icon and look for Episode 3 in the list. There you’ll find a bunch of thumbnails that are linked to the full sized shots in my gallery. 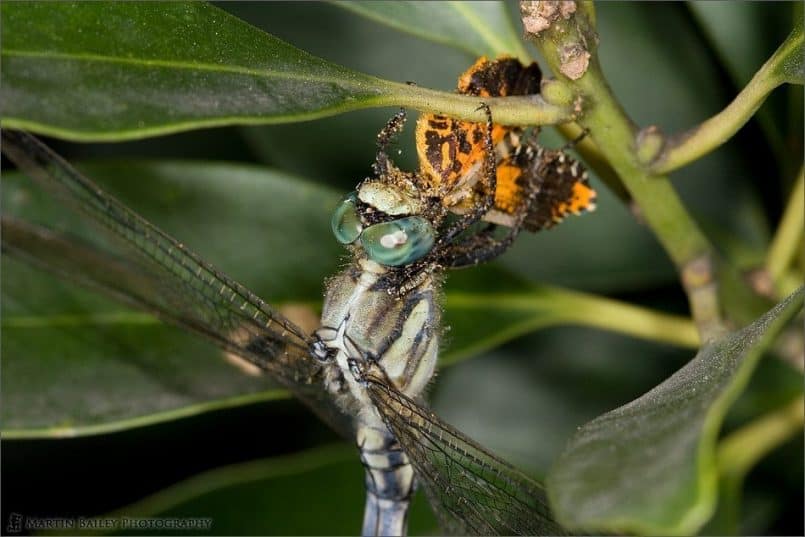 I actually wanted to create an enhanced Podcast with chapters, so that I could change the photos at specific times, but this apparently requires a tool that only works on Mac computers, and I use Windows, so I’ll have to wait until the tool is available for Windows too. Anyway, for now, you will only be able to see the first photo if viewing on an iPod, but if you are using iTunes you can click through the photos instead of going to my site.

Also, something else I’ve been meaning to say is, if you are looking at my photos in iTunes, note that iTunes will by default try to display the photo larger than it actually is. This will make it appear grainy as the photos are only 800 pixels wide. Click on the center maximize button to return to the actual size of the shot and it will appear as intended and look much better.

So to continue with the point I wanted to make about the photo of the dragonfly. It is important to look for clues. In this case is was that the dragonfly was carrying something, that enabled me to get a shot that has much more action that just a dragonfly sitting on a leaf.

It is sometimes not the subject that you spot first either, but something it left behind. If you are on a safari you might track a wild animal from its foot prints or dropping, but even in less exotic surrounding you can use this technique. I was in a nature research park near my apartment in Tokyo and was thinking about wrapping up for the day and started walking for the gate, when I noticed lots of black pellets about two millimeters across on the ground under a bush. I’d seen them before so I new what to look for, and low and behold, the bush was filled with caterpillars. I had not seen this particular species before, and was happy to find some huge black and orange caterpillars.

Next let’s take a look at shot number 636 of a field of poppies. When faced with a wonderful vista or a sweeping field of flowers, it is natural for us to want to photograph the entire scene. However, although we see the world as though we are looking through a very wide angle lens, the human eye is actually very selective. We switch in an instant from a wide angle to a telephoto, and zoom in on areas of the shot that catch our eye, but this is usually a pretty subconscious action. By all means take that shot of the sweeping field of flowers. I would. But also drop a telephoto lens onto your camera and try to pick out a few areas to zoom in on, as I did here. I ensured that the shot had some foreground with a number of flowers in relatively sharp focus and a taller flower on the left with a stem and bud on the right of similar height to frame the shot. I also chose a cut that had some distance between the main subject and the background so that the background was far enough out of focus to simply provide a backdrop with some splashes of colour in it. I chose an aperture of F8 to ensure the foreground was relatively sharply focused but the background was not. 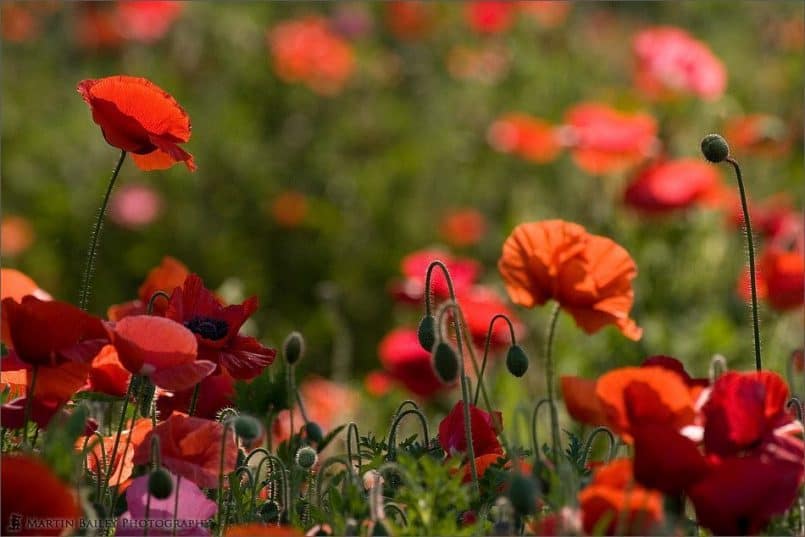 In nature photography, animals often do the same thing over and over again. If you see an animal doing something that you find interesting, and yet failed to capture the first time you saw it, continue to track it in your lens for a while. You will often find it does it again and if your reflexes are good enough you have a good chance of capturing it the next time around. Animals also tend feed or rest in the same place. Insects usually hatch from their eggs at the same time and the same place year after year, so going to a certain place at a certain time of day or time of year can help you to get your shot.

These are ways of anticipating what will be at a certain place, but in a very broad sense this is only a little more difficult than anticipating what time to be in a certain place to get a good sunrise or sunset shot. After all, it happens everyday. We just need the weather on our side. Sometimes though, by the time we see the moment it’s over, and we may never be faced with the same scene again. Therefore, watching and anticipating future events is a skill that if developed could help you to get shots that are a cut above the rest.

In the next shot, number 704, at the bottom of the screen you can see three people in silhouette having climbed some steps between a number of high-rise buildings in Tokyo. I saw these people walking up the stairs as I walked toward the train station having spent the afternoon shooting in the Hamarikyuu Park where I made the shot of the dragonfly having his dinner. Without these people in silhouette the shot would lack interest and scale. I would not have even raised the camera to my eye had these people not been climbing the steps. 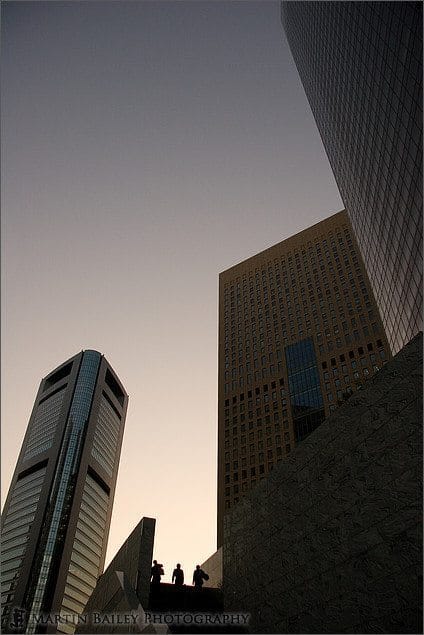 Another shot I am very proud of is one I made four years ago in Ueno park. It is number 36, and I called it “The Tall Men”, for obvious reasons. These huge guys were waiting craned over the public toilet door, and someone was obviously going to come out sooner or later. I stood ready and waiting for the unsuspecting party to exit the toilet. As he did he found these four giants peering down on him and simply ran while putting his hands over his head for protection, but seeing the funny side he also burst out laughing. The only thing I regret about this shot is that it was taken with a 2 mega-pixel digital point and shoot, during my transition from film a SLR to my first digital SLR. 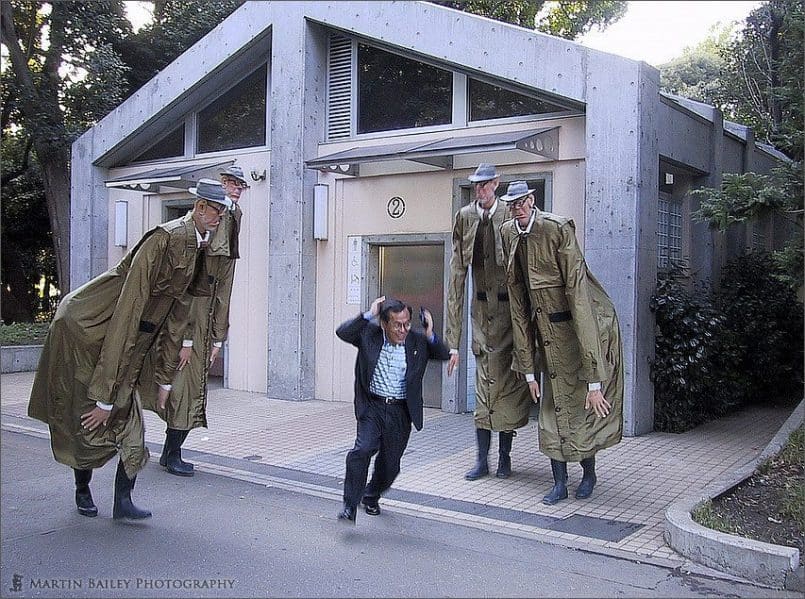 Finally here are a few more other pieces of advice based on my own experience. When walking along looking for photo opportunities, turn around every now and again. If you only look the way you are going, you won’t see what the things you’ve just passed look like from the other side. Also, things can change in the time it takes for you to walk passed them, especially if you’re spending a lot of time photographing things along the way.

Also, crouch or lay down low, or climb up onto a raised area and look at things from a different perspective, you may find the world looks much different from 50 centimeters from the ground. To finish, take a look at photo number 625. I call this shot “Benevolent Smiles” and it was made possible by kneeling on the gravel of a Buddhist temple and using an angle finder, as these guys are only about 20 centimeters tall. 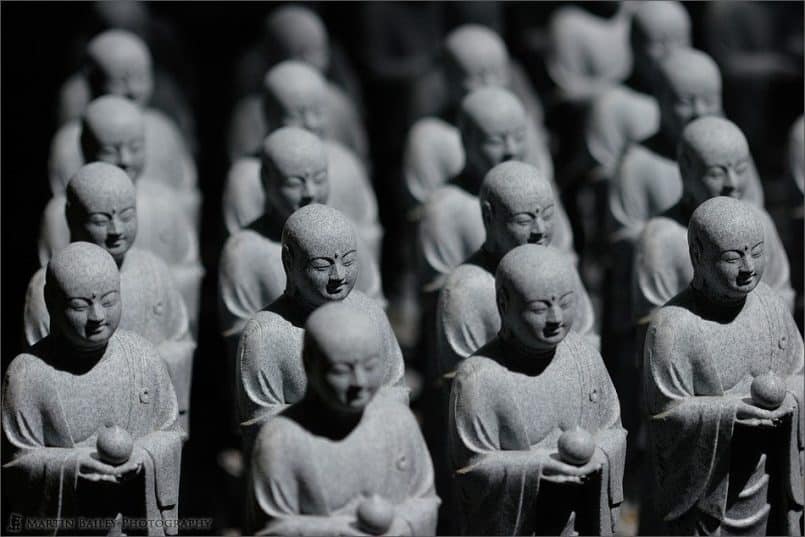