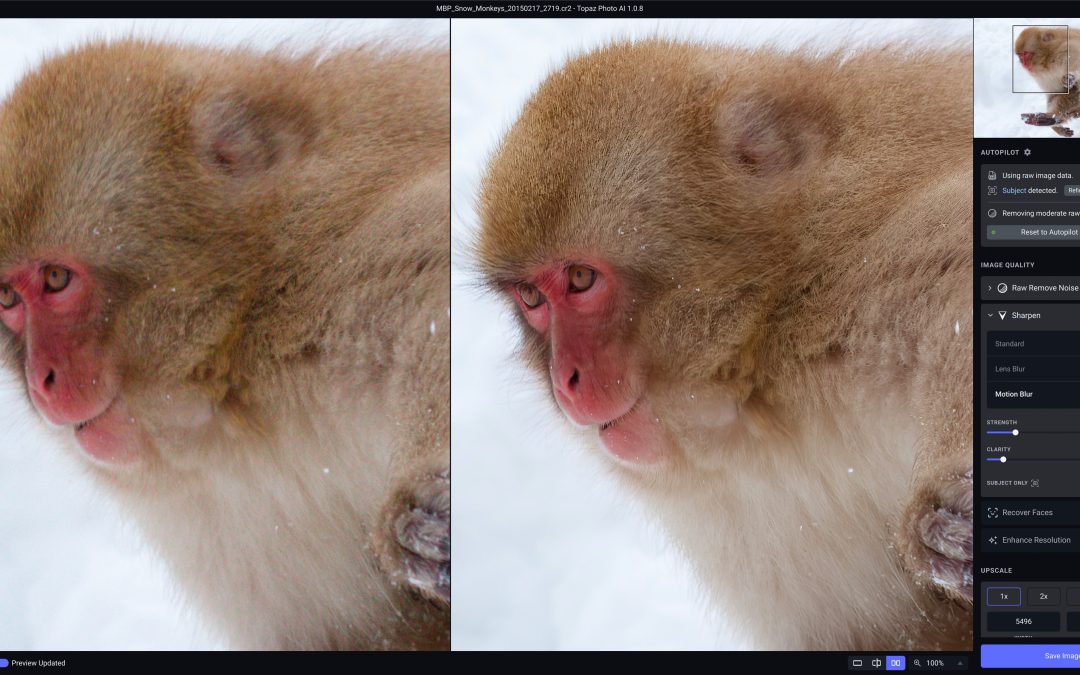 In April this year, I tried the Topaz Labs suite of tools and ended up requesting a refund because there were some nasty color casts in the DNG files that Topaz created after I processed some raw files from my Canon EOS cameras and viewed them in Capture One Pro. Since that review, though, I have, on several occasions, missed the pretty amazing noise reduction that the Topaz tools provided. So a few nights ago, after shooting the very dark Lunar Eclipse at ISO 3200, leaving me with a fair bit of noise to clean up, I tried Topaz Photo AI, using a trial license, and was once again amazed at how well it dealt with the noise in my image.

You can’t save your images with the trial license, though, so I bought a license and saved my image as a DNG file. It looked pretty good, and I could not see any color casts, so I was happy with my purchase and somewhat relieved to have that Topaz magic back in my digital toolbox. I was not yet convinced that they had solved their problems with saving as DNG files, though, so today, I’m going to share the Lunar Eclipse shot that I processed with Topaz Photo AI, and then we’ll move on to do a few more tests to see if the problem still exists. This time though, even if I do see the issue again, I’m going to keep the software, as it’s so good. I’ll have to put up with saving my images as TIFF files when the color cast does cause issues.

Anyway, first here is the photo that I shot of the Lunar Eclipse with Uranus (I said Neptune in the recording – sorry!) sitting diagonally down in the bottom left thirds intersection. I forfeited a little detail in the moon, but the noise destroyed most of the detail anyway, so I’m pretty happy with the result. I shot this image with the Canon EOS R5 and my 100-500mm RF lens with the RF 2.0X Extender fitted for a focal length of 1000mm. I cropped around 10% of the image away to give a slightly larger view of the moon. Now let’s test to see if my other images are still getting that color cast when processed and saved in DNG format.

OK, so I just opened the main offending image from my April tests, of a young snow monkey galloping along the side of a snowy mountain, and processed it in Topaz Photo AI. Unlike the previous suite, which had various tools for various objectives, Photo AI has all of the main tools rolled into one application, making it way less cumbersome to use. Here is a screenshot showing the settings I enabled and a before-after of the foot of the monkey, which showed a bit of motion blur from the monkey’s movement.

Click on the image to open the full-sized screenshot to explore the detail. I’m sure you’ll agree that the sharpness of the foot is incredible! Photo AI has completely removed the motion blur and cleaned up the snow on the monkey’s fur.

Here is another screenshot showing the face of the monkey, and again, I’m sure you’ll agree that there is a huge improvement in the sharpness. This is one of those images that had bugged me since shooting it, due to the subject movement, but Photo AI has completely turned that around.

What’s more, I saved the image as a DNG and imported it back into Capture One Pro, and there is no trace of the nasty color cast that led me to request a refund in April! This is amazing! I’m pleased that this works as it should now. Topaz let themselves down by leaving that unfixed despite it being pointed out to them by many people. They have earned my trust by fixing this issue, so I’m completely sold. Topaz Photo AI is amazing! Here is the final photo for your reference.

And to show you what has been fixed, here is the screenshot from the April episode showing the color cast in the DNG file that I saved and reviewed in Capture One Pro at the time. Although it’s obvious, the offending DNG is the one in the bottom right.

To check a wider color palette, I also processed a recent image from Okunikko of a patch of Autumn leaves on the side of a mountain. I was amazed at how much more detail Photo AI brought out of the image, but here is the image in web size to show you that the color is all completely intact. Nothing shifts.

One other thought just crossed my mind, and that is that it is possible that Capture One made a change that fixed this color cast as well, as the Topaz team claimed that there was nothing that they could do, and Photoshop and Lightroom did not show the color cast. I’m not going to dig any deeper than this thought bubble, but I did want to point out that this could be a happy coincidence rather than the result of hard work on the Topaz team’s part. Although they have put a lot of hard work into Photo AI. It does an incredible job almost entirely automatically.

Either way though, I am very happy to have this option now, and without having to save my images in TIFF format, which I dislike doing unless I really have to. Well done to whoever fixed this. Topaz Photo AI gets a huge thumbs-up from me now. Please note that I have not communicated with the Topaz team regarding this review. I bought the plugin with my own money, and the views I expressed in this post are my personal opinions based on my impartial testing of the product.

If you’d like to check out Topaz Photo AI you can find it at https://www.topazlabs.com/topaz-photo-ai