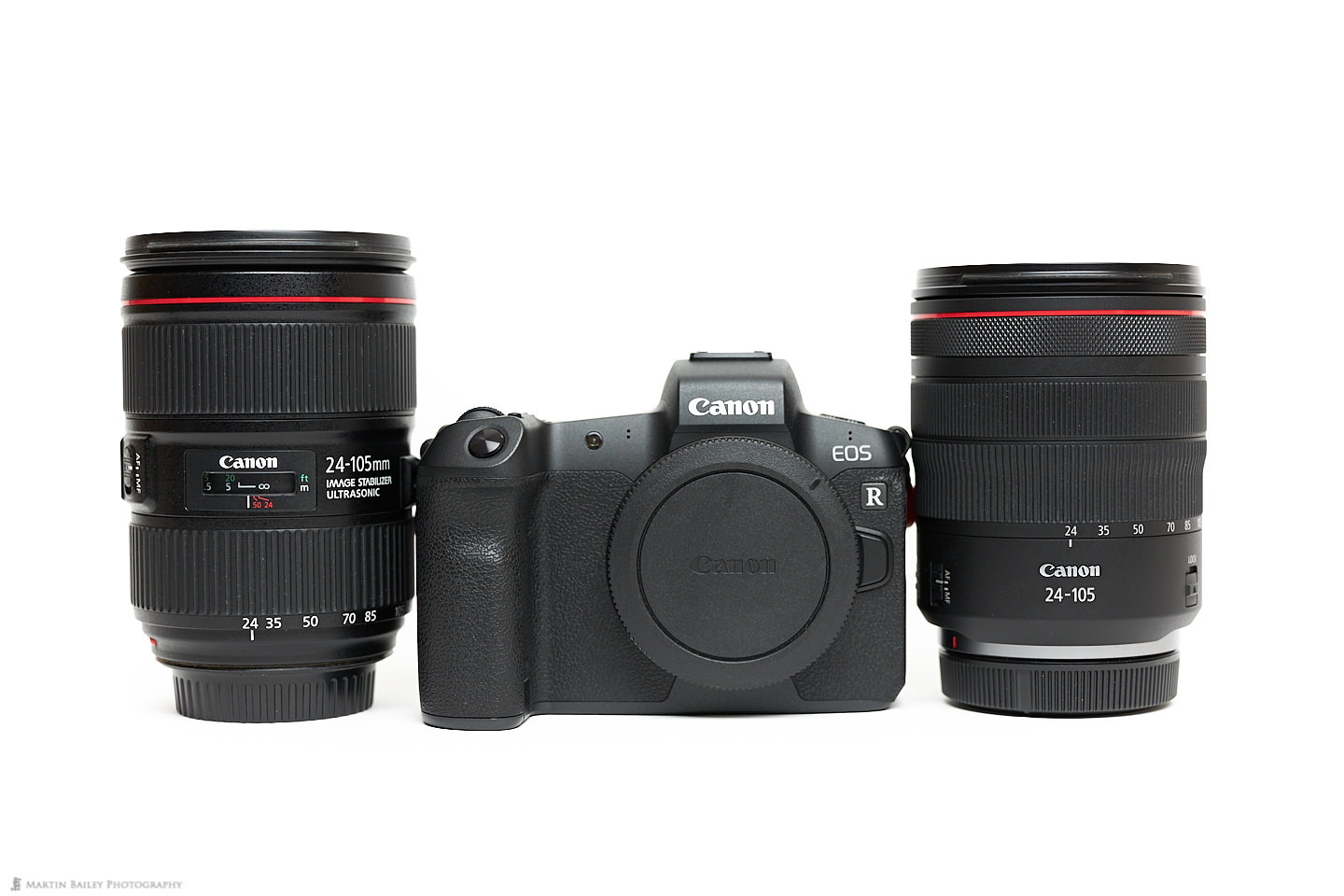 A few months ago I used two images of the same scene to compare how well the Canon EOS R images at 30 megapixels would print, compared to the 50 megapixel Canon EOS 5Ds R camera. For these tests, the results of which you can see in episode 660, I had the EF 24-105mm lens on my 5Ds R and the new RF 24-105mm lens on my EOS R. I was surprised to see that the image quality from the EOS R was so good and that that lower resolution images could actually be printed as large as the higher resolution images and actually looked a little better!

Since doing these tests though, I started to wonder how sharp the EF 24-105mm F/4 Mark II lens would be when mounted on the EOS R using the Canon Control Ring Mount Adapter, so this week, I’ve done a few tests, pitching the EF 24-105mm lens against the RF 24-105mm lens, but this time both on the Canon EOS R. A few people have asked me about this as well, and I’m sure there will be some people out there that are using the EF 24-105mm lens via the mount adapter and wondering if it’s worth switching. Value and worth are very subjective, so I’m not going to tell you what to do, but the results of my tests will give you everything you need to know about the difference in sharpness so that you can make up your own mind about this.

For the test, to keep things equal between frames, I set up my camera on a tripod and photographed a printed test chart attached to my whiteboard. I turned Image Stabilization off for all of these images so that it didn’t wiggle anything around as the exposures were captured and I shot three sets of images with each lens. The first set that we’ll look at was shot at 24mm, the widest focal length of these lenses, then the second set at 50mm, almost in the middle, and a final set at 105mm, which is the longest focal length of these lenses.

Below is an iPhone photo of my set-up, as I shot the 105mm focal length set. You’ll see that I was also using a studio light with a softbox to light the test chart. I left the ISO at 100 and the shutter speed at 1/200 of a second for all of the images, and I adjusted the exposure by making the studio light brighter as I increased through the aperture stops. This way we are able to rule out ISO and shutter speed as a reason for any differences between the images because these settings were the same for all 36 test shots. It also helps us to rule out camera shake, because the studio light’s burst is way faster than the shutter speed, so I’d literally have needed to swing the camera around on its strap to get any camera shake. OK, so a slight exaggeration there, but you know what I mean.

So, here first are six images which cover the entire aperture range in full stops using the EF lens, so we start wide open at f/4, then move through f/5.6, f/8, f/11, f/16, and down to the smallest aperture for both lenses, which is f/22. This first batch is shot at the widest focal length which is of course 24mm.

All of these images have been cropped down to 1440 x 960-pixel images at 100%, so if you ensure that your browser window is wide enough and then click the images, you will be able to see the image at its full resolution.

You’ll notice that the EF 24-105mm lens is pretty sharp at 24mm from wide open at f/4 through to f/16, and you will probably be able to detect just a little bit of softness caused by diffraction as we stop down to the smallest aperture of f/22.

Here now are the same six apertures but using the RF 24-105mm f/4 lens. Again, open them up in the lightbox to view the difference. Note that the images aren’t aligned perfectly because the EF 24-105mm lens actually has a slightly longer focal length, despite them sporting the same numbers, and it is really not that important for the images to be aligned for this test.

I think you’ll agree that at 24mm the images from the RF lens are incredibly sharp from f/4 to f/16, and there is a little bit, but slightly less diffraction kicking in at f/22.

At 24mm though, I think it’s safe to say that there is very little difference between the EF and the RF lenses. They both perform admirably throughout the entire aperture range.

Here now is the EF lens at 50mm, again, showing the center of the image, just from further away, and zoomed in to 50mm.

I was actually surprised by how soft the EF lens is wide open at f/4, and I think I can also detect diffraction starting to kick in from f/11 and very slightly worse through f/16 to f/22. It’s not a huge amount, but usually, it’s the extremes of the zoom range that suffer, not the middle of the range, so this was surprising for me.

Here too is the RF lens at 50mm, for comparison.

Once again I think you’ll agree that it’s sharper throughout the entire aperture range, and there is just a tiny bit of diffraction at f/22, but otherwise it’s tack-sharp.

Now let’s move on to the longest focal length of 105mm. The long end of a lens is usually where the image quality suffers the most.

Again though, the EF 24-105mm breaks the rules, as it is tack-sharp throughout the range, with just a tiny bit of diffraction at f/22.

And to finish this group of images showing you the image quality at the center of the lens, here is our RF lens at 105mm.

I was very surprised to see that at 105mm when the lens is wide open at f/4, it’s a complete mess. The first image in that batch is so bad that I ran my tests again, thinking that I’d made a mistake, but the results were identical, so it’s official. At least my copy of the RF 24-105mm lens is crap wide open at its longest focal length. I’m pleased it’s as sharp as it is elsewhere and when stopped down, but I need to keep in mind to stop this lens down a little when shooting at 105mm to avoid that soft spot. In fact, I’m going to seriously consider having Canon take a look at this lens while it’s still under warranty.

I’ve stuck to the same groupings, starting with the EF lens at 24mm through all of the full aperture stops.

I can see a little bit of color aberration or fringing at f/4, and a bit less but still see it at f/5.6, but it pretty much clears up by f/8 and the image doesn’t really degrade much again, even at f/22, where the diffraction is almost undetectable.

The RF lens is up again next, through the same full stop aperture range.

This is again pretty amazing, especially for the corner of the images with the lens wide open. The sharpness is there until a tiny bit of diffraction kicks in at f/22 but I really can’t see any fringing or color aberrations to speak of, so that’s great!

The EF lens starts off pretty nasty at 50mm not really sharpening up in the corners until f/11, but then it stays sharp and doesn’t really suffer from diffraction even at f/22.

Despite the amazing performance of the EF lens in the center at 105mm, it doesn’t really settle down until f/11 in the corner, but then it’s nice and sharp again and diffraction isn’t an issue.

I’d have been amazed if the RF lens was sharp in the corner at f/4 when zoomed in to 105mm after the poor image quality that we saw in the middle, but it actually doesn’t drop off very much at all, which is a bit of a bonus. It does sharpen up nicely at f/5.6 and shows only minor diffraction at f/22.

OK, so I hope you found this useful if you are interested in the difference between these two lenses when both are used on the EOS R. Note that there was no processing done to the images other than the default sharpening that Capture One Pro applies to all images.

The RF 24-105mm is definitely sharper overall, but with a surprising result at f/4 when zoomed right in to 105mm. I’m also thinking that the EF 24-105mm lens gave some very solid results, showing that it’s a top-class lens even when used with a mount adapter on the new RF mount camera system.

I personally made my decision to buy the new RF 24-105mm f/4 lens, based not only on my expectations that it would be a little sharper, but also based on the size. As I mentioned in my review of the EOS R, and as you can see in the below image, the EOS R with the RF 24-105mm is significantly smaller than the 5Ds R and the EF 24-105mm lens. When you mount the EF lens with the mount adapter, it greatly increases the overall size of the system, and it was important for me to keep this all at a minimum.

If you would like to test any of your own lenses like this, the chart I was using is from the Cornell University and you can download a copy of the PDF here. And indeed, if anyone with an EOS R and the RF 24-105mm lens decided to run these tests, please do let me know if you see the same poor image quality that I see at f/4 and 105mm. I’d be interested to hear what you find.

You can get a copy of the test chart I used here: https://www.graphics.cornell.edu/~westin/misc/res-chart.html 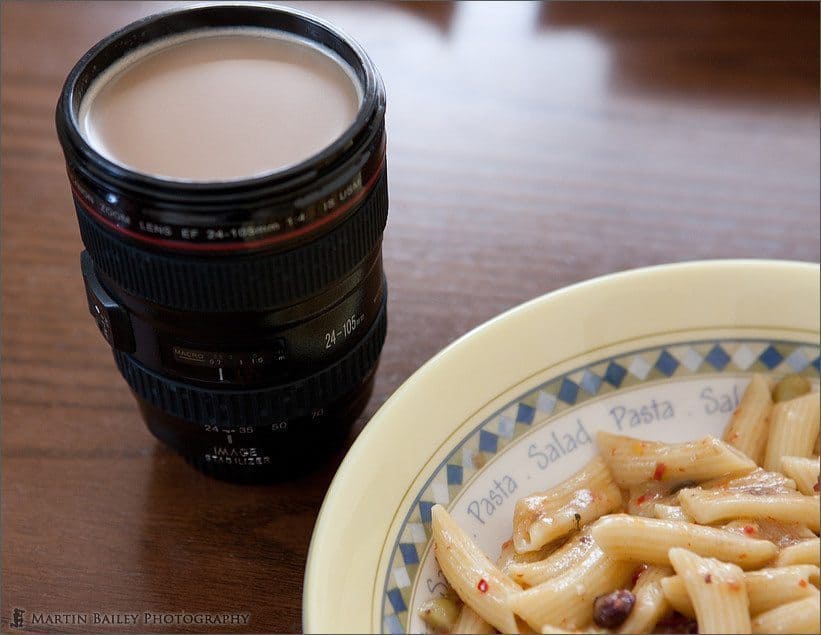 These turned up yesterday from canonmugs.com, after a short wait for stock to arrive. 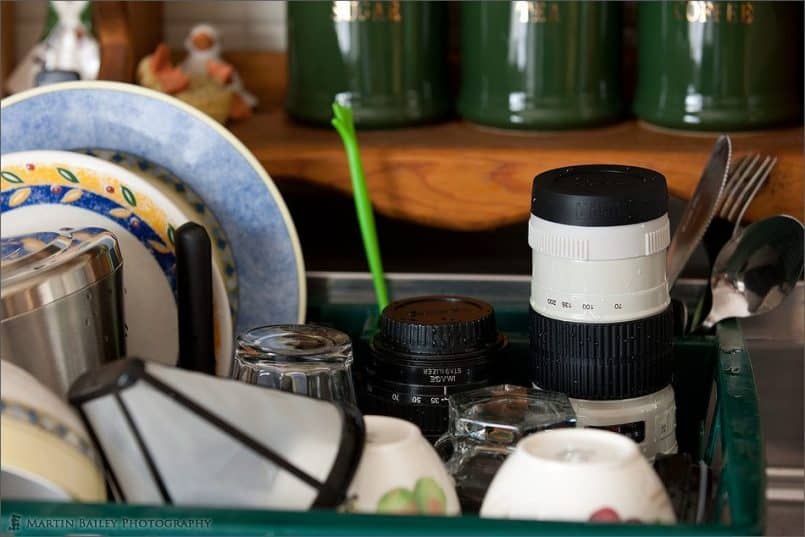 After washing them, I tried the 24-105mm for a cup of coffee with lunch. 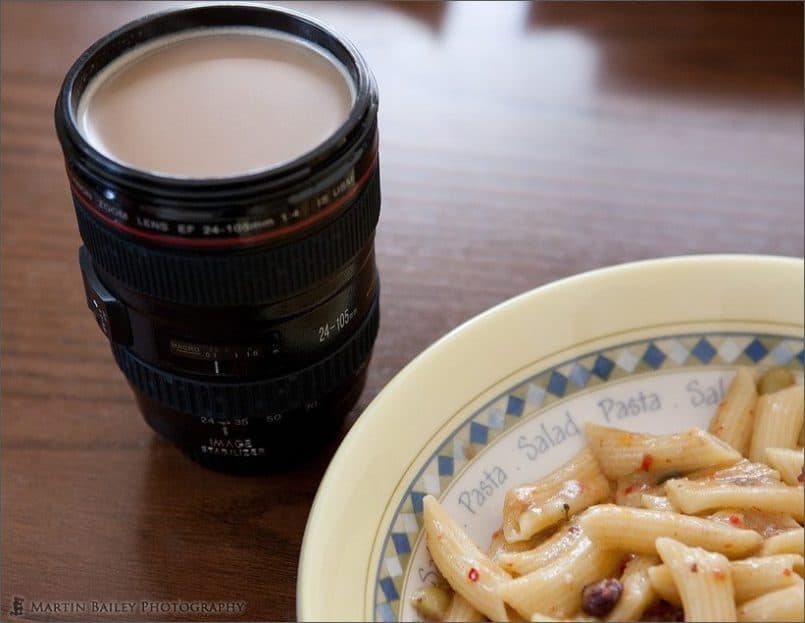 Although the plastic taste might wear off in time, I’m probably going to demote the 24-105mm to a pen holder. The coffee didn’t taste good at all.

The 70-200mm has a stainless steel or aluminum inside, so it probably fine to drink from. I’ll find out next week when I take it to be filled up at Starbucks. Doh! I hate to see people walking around with Starbucks cups in the street, pretending to be the cast of Friends!