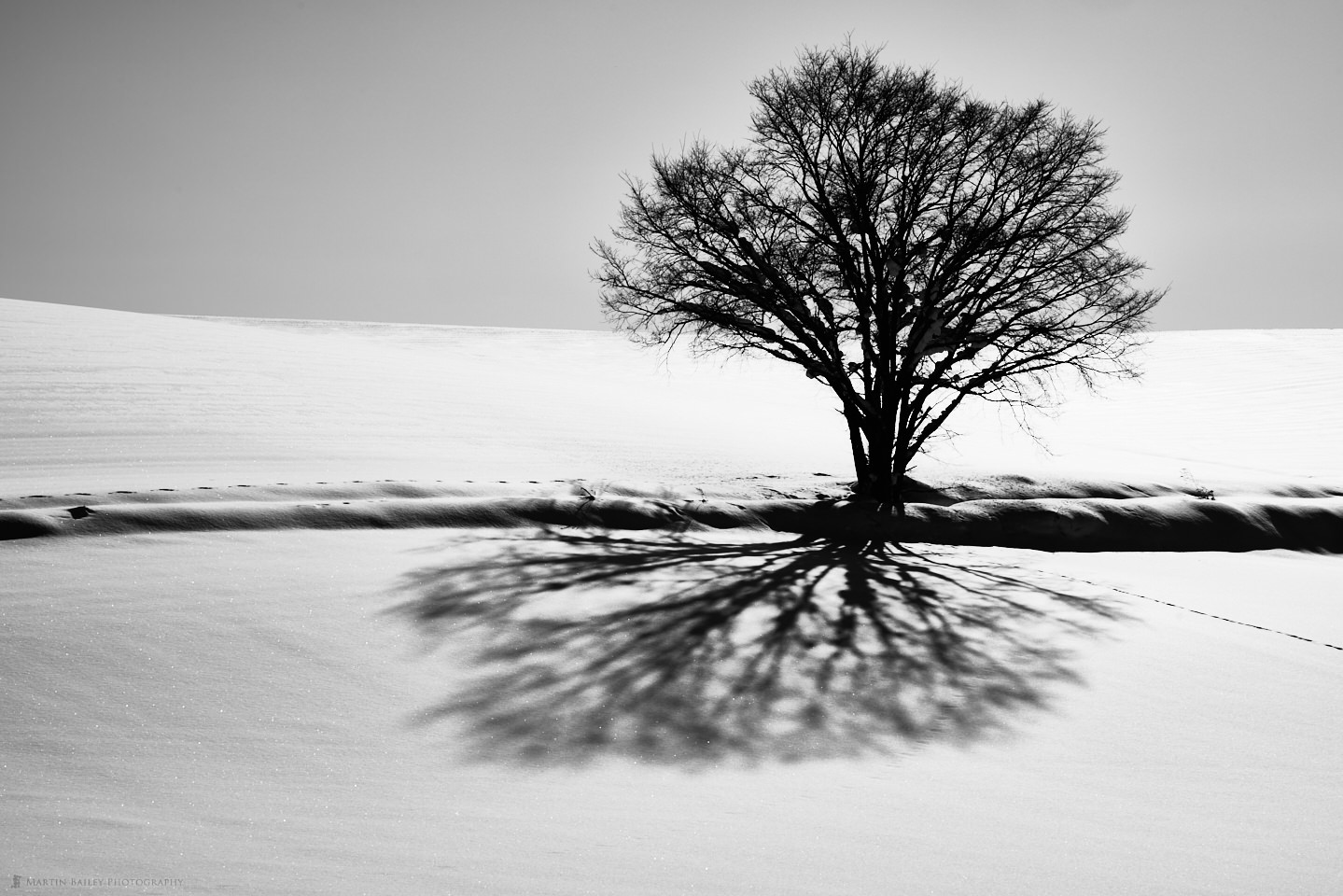 A few days ago, I returned from my first Hokkaido Winter Landscape Tour in three years. With the “Rona” still doing the rounds, we had our share of “fun” to deal with, but we finished the tour and had a great time doing it. Today I am going to start a series of three episodes to walk you through the key moments of the tour, illustrated with 30 of the 74 photos I was happy with from the trip, and we’ll end with a recording that I made on the bus on the last day, to get a comment from each of our guests.

We started our tour, as always, with a visit to the beautiful town of Biei. I like to take the group initially to a place with an unnamed tree that I affectionately call Martin’s tree, as I’ve shot this tree on my tours since 2008 and feel a certain amount of pride to be able to say that I am not aware of anyone else that worked this tree photographically over any significant span of time.

I’ve added an Adjustment Layer in Capture One Pro to darken the sky and bring out the detail that you see in the clouds. Timing is quite important, as the sky ranged from almost all blue sky at some points, to simply a bland white sky at others. Keeping my eye out for the heavier cloud that contains this detail helps to get something that I am happy with.

If I rotate my camera around 70 degrees to the right from my tree, there are three more trees that are named. In this next image, you can see the Parents & Child trees, with the idea being that the two trees on either side of that middle tree are the parents, and the skinny tree is their child.

This again took a little bit of patience in the timing, as the sun was catching the hill along the top right of this scene at different times, and I noticed that if I waited I could show that the field had two separate hills in it by waiting for the light to move and separate the background hill from the foreground hill. If you are not a fan of this kind of photograph you may be thinking “so what?” but as a minimalist, it is small details like this that get me excited about the locations we visit on this tour.

As the snow started to fall, we moved to a different location where we shot this line of trees, and the snow helped by removing the sky and the top of the hill behind the trees, which is, in fact, lower than the top of the trees but turns completely white when it snows.

For the first time on this trip, I bought a print of a photograph of Shinzo Maeda, the photographer that put Biei on the map as a photography location, built the gallery Takushinkan, and owns the land on which we were standing to make this photograph. Apparently, this year is the 100th anniversary of his birth, and the gallery changed its display and included a beautiful image that had not been displayed before. I wanted a copy of the photo, but a big part of my reason for the purchase was to pay them back, to a degree, for allowing us to photograph there.

You’ll have seen pretty much the same photos from previous years if you’ve been following me for a while, and one that I always enjoy shooting with a new group, is what I call the pencil sketched trees, as you can see in this next image.

It has to snow with big snowflakes for this to work, but once you have heavy snow, slow your shutter speed down to around 1/20 of a second, and the snow leaves just long enough a trail in the dark part of the image to look like the trees are sketched with a pencil, rather than being photographed.

The following morning, we visited the blue waterfall behind the hotel and photographed it for 30 minutes or so before breakfast. In this photo, I included a bit of the spa town where we stay, and you can see that the street lights are still on, as we were there before the sun came up. This was a half a second exposure, so you can appreciate it was still relatively dark.

Here also is a photo of the base of the falls, again, with a slow shutter speed of one second. The blue color is caused by minerals in the water, and to a degree, the fact that it is still before the sun comes up, so there is a lot of blue light down in the shadows around the falls.

As the sun approached the horizon, we got a relatively rare glimpse of the top of Mount Tokachi as the cloud lifted and got a lick of color from the sunrise that was starting on the other side of the Tokachi Mountain Range. Because this side of the mountain was actually in shadow, it was very blue in the original photograph, so I used a mask on an Adjustment Layer to select just the mountain and changed the white balance to neutralize it a little and reduce the color contrast between the mountain and the sunrise.

Later in the day, we were photographing around Biei still and spent a few hours photographing details near a farm, and I got the following shot, which I am pretty happy with. I initially increased the luminosity of the blue sky behind the trees to turn it white. After getting home and looking at this on my large screen, though, I realized that it looked a bit strange as the trees and plants in the foreground cast shadows, which is a giveaway that the sky was blue, even though I converted the image to black and white.

I shot this next image at the same spot and may not have even moved my tripod but pointing my camera down into the field in front of us, and some beautiful shadows were being cast by the bright sun, catching the edge of a ditch, and these sprigs of plants that were braving the winter. I did enhance the shadows slightly with a Luma Tone Curve in Capture One Pro.

I’m not a fan of blue skies or bright sun in winter scenes, but I love this next image, where once again, it was the shadows that made it appealing, at least to me. Again, like most of this work, I have converted it to black and white, which helps to reduce the image to its graphic elements, but I was happy to get this. I’ve wanted to capture an image of a strong shadow from a tree for some time, so this was a good opportunity.

That is the tenth image of the thirty that I want to share, so we’ll start to wrap up this first episode, and I’ll pick up the trail over the next few days as I intend to create all three of these episodes before leaving for the first of my two Japan Winter Wildlife tours on Friday, which is just two days from now. I’ve got another episode written and will record that shortly too, and I’ll try to finish the third before I leave and release it as I travel.

If this tour is of interest to you, we still have spaces on the 2024 tour, so check our tours & workshops page for a quick check of availability and click on the graphic to jump to the details for each tour directly from there.