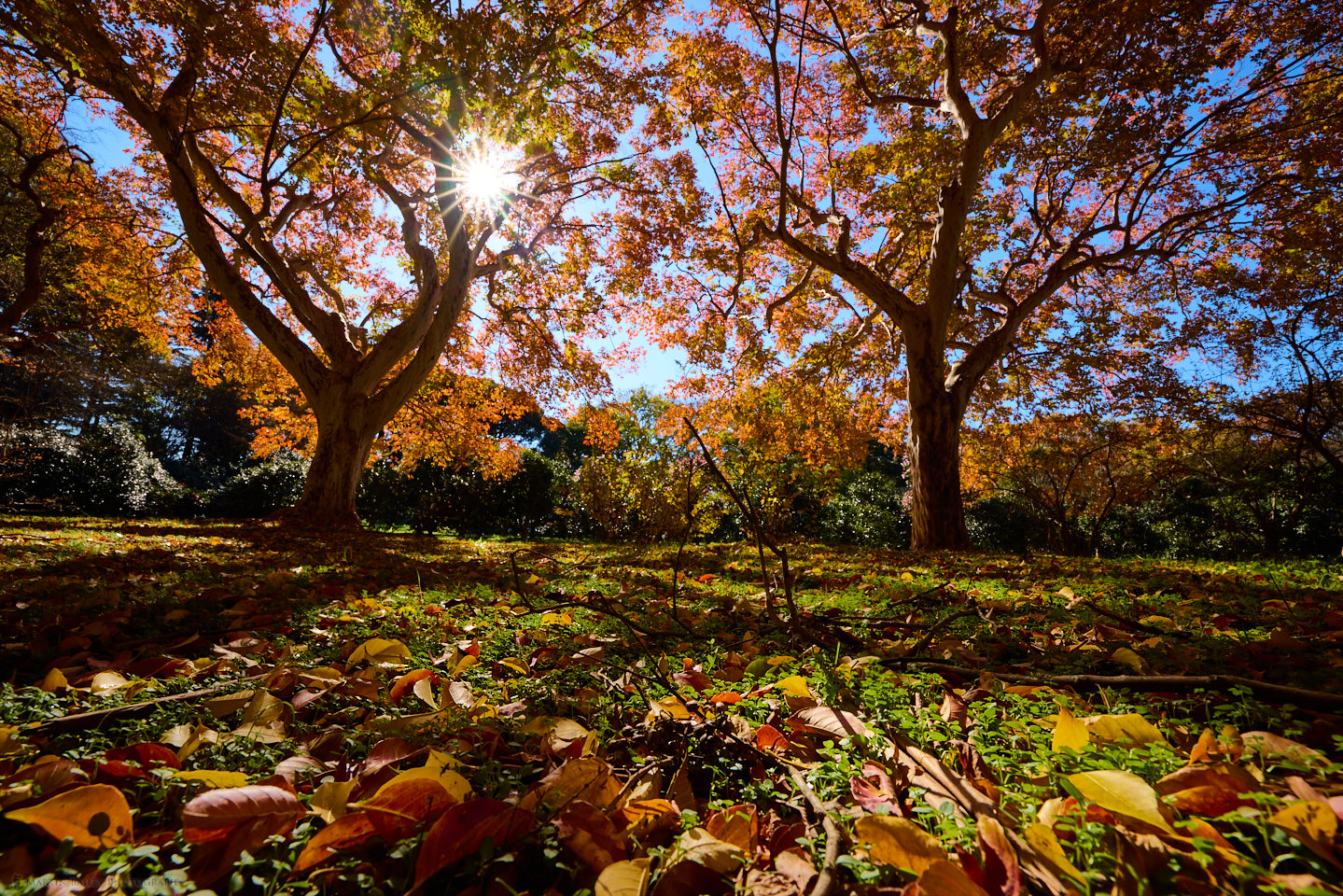 It’s hard to believe that a year has passed since I made a short movie showing the Autumn color in our local park, the Jindai Botanical Park and Gardens here in Tokyo. At the end of our November Question Time event for Patreon supporters last weekend, we talked about sharing our 2022 Top Ten images in the January Question Time, so I’ve been starting to reflect on the year a little mentally, recalling my May trip to Namibia, and feeling thankful that we finally seem to be returning to a semblance of normality as the pandemic gradually becomes more manageable and less of a threat for the majority of the population.

Unfortunately, as I went through my images of this year’s Autumn leaves in the park, I was somewhat saddened that many of the images were just repeats of previous years. The strange weather has made the leaves considerably less attractive than usual, and if it weren’t for a few other photos that I quite like, I probably would have given up on the idea of sharing any photos from this visit to the park altogether.

As it stands, I have nine images from the visit, and a couple of them that I am happy with, so let’s work through my shots anyway, starting with this image of the Crepe-myrtle trees in their Autumn dress and the sun shining through the canopy.

I like the sunburst or starburst effect of the sun shining through the trees. This effect is easily achieved with wide-angle lenses, even without stopping down the aperture very much, but I had stopped down to ƒ/14 for this shot anyway to get the leaves and foreground shadows sharp, although, in this image, that would have been achieved by an aperture of ƒ/8 or even ƒ/5.6.

The second image I shot of these trees, though, benefitted much more from the ƒ/14 aperture as I set my camera down on the ground to capture the grasses and leaves in beautiful detail. The closest leaves to the lens are going slightly out of focus, but everything is sharp from a few centimeters into the frame, so I’m happy with how this turned out.

I folded out the screen and had the digital level visible with the intention of ensuring that the horizon was straight, but as I put my camera down, a few people that I was hoping would walk out of the frame did just that, so I grabbed this shot before a few other people walked into the frame. The result is that I hadn’t leveled the horizon properly yet, but this was my best shot because of the lack of people. I could straighten the horizon in post, but I didn’t want to throw out any pixels, so I’m living with this for now, and I do like the shot, even wonky, so I’m not too concerned.

I did use an adjustment layer in Capture One Pro and brushed in a little bit of lightness in the shadows in the foreground leaves, just to open them up a little and provide a little more balance with the elements in the top of the frame. Another thing I did as I shot was to remove the twigs in the foreground, but again, I preferred this shot and think that the twigs add a little to the feeling of the image, so again, they stayed.

Here also is a shot of the yellow maple leaves, which are generally a lot prettier, but this year they have been eaten a little more than usual by bugs, and there are some red spots in the yellow, probably caused by some chillier than usual nights over the last few weeks. We even had a frost a few times, and that doesn’t usually happen in Tokyo in November.

For these leaves, I opened up the aperture as wide as it will go, which gives me ƒ/7.1 at 500mm with the Canon RF 100-500mm lens. This is because I wanted as shallow a depth of field as I could get for the leaves to keep the viewer’s attention on the foreground leaves and make the background leaves more like supporting actors. The background is very dark, as I aligned with a shadow area in this image, so the shallow depth of field didn’t have much effect on the distant background in this shot.

In the next image, though, I aligned the leaves with an illuminated area of the background to capture the out-of-focus leaves to provide a more colorful backdrop. I actually closed my aperture down to ƒ/8 for this shot to get just a slightly deeper depth of field, as I wanted the foreground leaves, which were all close to the same distance from the camera in this shot, to be in focus, while leaving the background as blurred as possible.

I like the textures in the background color, which were smooth over the red leaves, but some low grasses had an interesting effect on the bokeh in the bottom right corner, which I found somewhat appealing. Again though, the leaves themselves aren’t very attractive, and the bear twigs on the right are just about acceptable because they allow us to see that textured yellow bokeh.

Just one more leaves shot to go as we look at the red leaves a few meters away from the yellow leaves. These red leaves were backlit, so the light was shining through the leaves rather than shining on the leaves, and although these leaves were in slightly better condition, the shot is nothing special. I’ve only really kept it in the set because I kind of like the atmosphere, but I will probably not keep this in my finals if I review it again in a few week’s time, probably as I work on my 2022 Top Ten image selection.

After spending probably less than half the time I usually spend photographing the maple trees, we had a walk through the park, noticed that the cosmos flowers were already gone, leaving just soil now waiting for the winter to set in, and we made our way through to the corner of the park that has various types of Dahlia flowers at this time of year. They were mostly past their best, with a few blooms still worth shooting.

I noticed this honey bee in the center of a yellow Dahlia, so I hit the Exposure Lock button on the back of my Canon EOS R5, as I’ve customized the camera to remap that button to switch between One Shot and AI Servo focusing, and I used AI Servo to stay with the bee as both the bee and I moved around. This made it pretty easy to get the bee’s eye nice and sharp as it went about its business.

I do enjoy photographing these Dahlia flowers and converting them to black and white in Capture One Pro, then used a few adjustment layers to black out the background. I did take a patch of black velvet to hold up behind the flowers to help reduce the processing time, but my wife had gone to the restroom, and the angle was such that it wouldn’t have been possible to hold the cloth behind this flower anyway, so I did all of the dark backgrounds in post.

I generally start with one adjustment layer and brush over the background with a tone curve that has the highlights intact, but the shadows dropped down as far as I can take them. Then I do at least one more adjustment layer with reduced exposure, and I’m careful not to paint over the flower’s petals around the edges.

The next Dahlia shot received similar processing, but this felt like a firework to me, so I left its stalk more visible so that it looked like the light from the firework as it climbed to the point where it exploded. I also play with the highlights and shadow sliders on the background layer to increase the contrast between the layers of petals.

The final image that I wanted to talk about is this rose photo, which I again gave the black background treatment, but I left the unopened bud visible, as it felt like a thespian waiting in the wings, probably until the main actor here withered, giving way to the supporting actor.

Apart from the slightly unattractive maple leaves this year, I guess I’m relatively pleased with this selection, although often at this time of year, the maple leaves in Autumn dress usually steal the show. With me not being able to run the 2022 Japan winter tours this year, though, I can see probably at least one of these making its way into my 2022 Top Ten selection that I’ll share towards the end of the year or the start of January before I set off for the first of the 2023 Japan Winter Tours.

As I said, we will review Top Tens from any Patreon supporters of Tier #3 or higher that want to join the January Question Time event, which I’ll schedule for when I’m home between trips. If you’d like to be involved in that, and share your work with the group, ensure that you select your own top ten images from 2022 and support the Podcast for at least $5 per month, even if it’s just for January, and you’ll receive an invite via the Patreon message system and via the private MBP Community Forum, that comes as one of the Patreon supporter benefits. I hope to see you there!

Support us on Patreon: https://mbp.ac/patreon