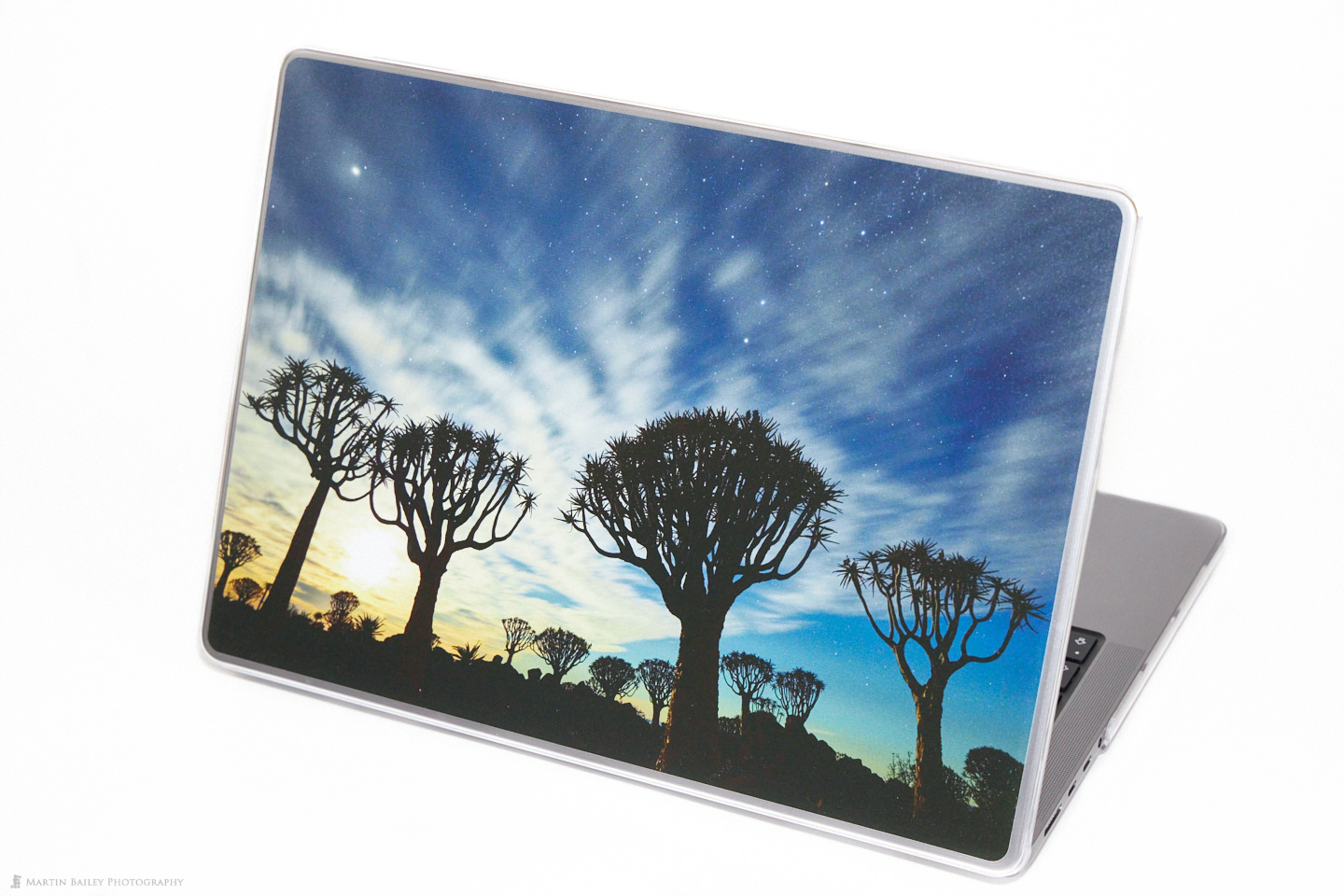 I’m currently coming to the end of my preparation to travel to Namibia for my first visit in three years and my first tour & workshop in two and a half years. I’m excited and am currently hoping that we can all get to Namibia and kick off the tour without issues. As I prepared, I realized that I was probably doing a few things through experience that might help others, so I will share my thoughts in this post and podcast.

One of the first things that I wanted to relay is based on the fact that I had a small hole form in the screen of my old 13-Inch MacBook Pro towards the end of a Namibia tour a few years ago, which I put down to probably a grain of sand that found it’s way onto a key and was then pressed against the built-in display for a while, maybe during transit by car, as we moved between locations. An easy thing to happen, and I ended up getting the screen replaced a few years later as part of a routine repair with Apple, but the hole annoyed me for a few years, so I’d prefer not to get another.

To hopefully help avoid this sort of thing happening, despite me not liking to use a protective film on my displays, I bit the bullet and bought a good quality protective film and applied it to my new 14-inch MacBook Pro screen. It was made of relatively thick and strong plastic so it was easy to apply, and although I did get a few pieces of dust between the film and screen, I was able to peel off the film, remove the dust, and reapply it without messing anything up. Pushing the few air bubbles that formed to the edge of the film removed them, leaving me with a well-protected screen that I can hardly tell has a film applied at all. If anything, it’s just a little bit shinier than the original screen, but otherwise, I’m very happy with it. If it doesn’t work, and I end up with a damaged screen again, I’ll let you know, but I’m pretty confident that it will just save me from any further problems with the screen.

The other thing I always do when I travel is put a protective case on my computer. This is also from experience. During a voyage to Antarctica in 2011, I gouged a nasty trough into the outside of my first MacBook Pro, which was an old 17″ model, and it annoyed me so much that I ended up switching it out before the four years that I usually like to keep a laptop for. Since then, I have always used a protective case. I usually only need to buy one case, and it lasts me for the lifetime of the computer.

This time I decided to coat my new MacBook Pro with something a little fancier by having the cover printed with one of my Namibia photos, as you can see in this photo. I got mine from a company here in Japan called Yotsuba-Insatsu, and I can highly recommend them if you live in Japan. Otherwise, it will probably be more cost-effective to look for a company that prints these cases in your own country.

The next thing I bought in preparation for this and future trips was a set of four Apple AirTags. This was not based on my own experience but rather that of a client who was recently traveling in South America when they came across a car with a flat tire, but it turned out to be a scam. The people with the supposed flat tire robbed them and took their camera bags, but luckily they had AirTags in the bags and were able to get the bags back and bring the hoodlums that robbed them to justice. When I heard this story the first thing I did was order a pack of four AirTags.

I opted to have my AirTags engraved so that I could tell them apart, and didn’t realize that this would cause them to be shipped from Shanghai, so they were caught up in the Shanghai lock-down for exactly a month, but they did arrive a few weeks ago, in time for my trip, so I’ll be placing one of these in each of my bags and my large duffle bag, which I use instead of a suitcase for Africa trips because they are easier to stow in the limited storage space of our converted Land Cruiser.

The AirTags are very easy to set up. When you pull out the plastic tab allowing the button battery inside of them to make contact and power up the AirTag, you automatically see a few setup screens on your iPhone and can then track the items on a Map using the Find My Device app. You also get an alert if you leave your AirTags behind, which will be useful should that happen without me realizing it.

Other incidental items I’ll be packing include a rechargeable LED lantern, as we occasionally find ourselves with power outages, and I figured that dropping a lantern on our dining table would be nicer than pointing my flashlight up at the ceiling, as I’ve done in the past. It’s a slightly bulky item, but it’s pretty light, so it won’t be much of a burden, even if we don’t need it. It doubles as a regular flash-light, and there is a built-in alert light that flashes rapidly or in an SOS pattern should you find yourself in trouble, in the dark, in the middle of Africa… Hopefully, the lions and hyaena know the code too.

There are, of course, lots of other things to take along, such as mosquito spray for my skin and my clothes, and sunscreen etc. but these are par for the course, so I’m not going to list everything up. I did want to share a quick what’s in the bag photo before we finish though, as I am really happy with the downsizing that Canon has enabled me to do over the last three years or so, as I’ve transitioned to mirrorless.

As you can see, I am no longer putting the battery grip on my cameras. I do miss them sometimes, especially for wildlife work, where I sometimes find myself holding the camera in portrait orientation with my finger on the shutter button, waiting for an opportunity. Otherwise, though, I’m enjoying the lighter and smaller format and the overall reduced bag weight. Here are two photos, one showing the main gear I’m taking, and a second showing it inside my MindShift bag from ThinkTank. As I’ve used this bag over the years I’ve found that getting at my gear can be a little awkward, but it’s a good size for this trip, so I’m going with this again, at least for this year.

As it may not be obvious, from left to right in the bag photo, we are looking at the Canon EOS R on my RF 100-500mm lens, and I have the tripod ring turned to face the bottom of the bag to support the lens if the bag should get jolted. Next to that, you see the RF 24-105mm lens, and the 50mm f/1.2 lens is deeper in that section with the lenses kept from banging together with a protective separator. Next, we see the Canon EOS R5 fitted to the RF 15-35 mm lens. This is an f/2.8 aperture lens, so will be great for astrophotography, as well as the houses at Kolmanskop, the old diamond mine ghost town that we visit near the beginning of the tour. In the top section, which is the far right of the bag in this photo, you can see a Patagonia pouch into which I’ve placed my two Extenders and my set of extension tubes, which I take along in place of a macro lens, should I need to get any close-up photography.

Along the back edge of the bag, you can see my 14-inch MacBook Pro, which will be in its case for the trip, but just dropped in as it is for this photo. I take a second bag for my computer with all of the cables etc. but that goes into my large duffle bag for the journey, and I put the laptop into that for the duration of the tour. More and more airlines seem to want you to board with just one carry-on, which is now possible with the downsizing I’ve done. Of course, there are a lot of other small items like memory cards, hard disks, camera straps, ND filters, and my tripod, but for now, I’ve just included my main camera gear.

We’ll leave it at that for this episode. I’m flying out tomorrow, all being well, and I have unfortunately not had time to pre-record any episodes to release while I’m away, so unless I get some downtime to record a few messages as I travel, I’ll be back with several rapid release updates about the trip in the last week of June. See you on the flip side!

Check out our tours at https://mbp.ac/tours

Martin Bailey is a nature and wildlife photographer and educator based in Tokyo. He's a pioneering Podcaster and blogger, and an X-Rite Coloratti member.
PrevPreviousFrederick Van Johnson on Podcasting & the Future of Cameras (Podcast 778)
NextComplete Namibia 2022 Tour Report #1 (Podcast 780)Next