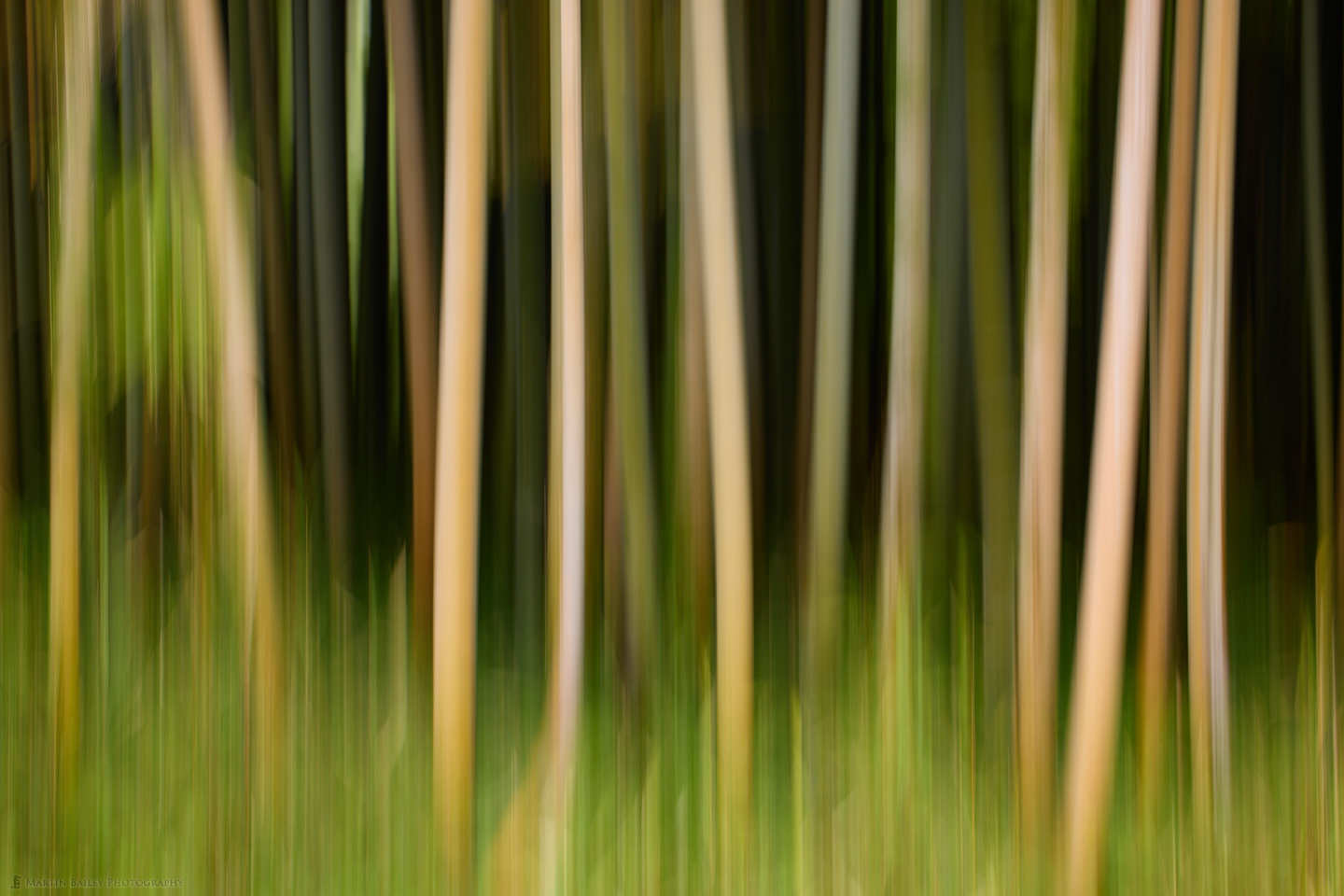 A few days ago my wife and I decided to go for a walk in our local park, the Jindai Botanical Park and Gardens here in Chofu, Tokyo, and as is often the case, I took a camera along. The cherry blossom came and went this year without more than a casual glance from my car window while running an errand, which is kind of sad, but it is what it is. With the last few blossom petals turning brown like patches of old snow at the side of the road, the rest of the park is now turning a beautiful spring green, so I decided to see if I could make a few intentional camera movement shots with the trees and spring color, and ended up with a few that I was relatively happy with. I shot some other photos as well, so I’ll share some favorites as you accompany us on our walk in the park.

We’ll work through these in chronological order, starting with this Japanese Rose shot. The name Japanese Rose doesn’t really do a lot for me, and the academic name Kerria Japonica has a similar non-ring to it. The Japanese call these Yamabuki, which conjures up images of spring and the warm orangey-yellow color carries the same name, so Yamabuki feels like a much better fit to me. As you can see there were a few drops of water left from the morning rain, and I also decided to darken down the outer edges of this shot quite a lot as well, to keep the focus on the flower and the texture of the leaves.

I was using the new RF 100mm Macro with its ƒ/2.8 aperture wide open to keep the background nice and soft. I used a shutter speed of 1/125 of a second and selected an ISO of 400 to achieve the optimal exposure, which I checked with the histogram superimposed on the electronic viewfinder which I have become completely comfortable with.

Here is a somewhat more documentary shot, but I wanted to share with you the feeling of the park, as we moved from one area to another, and this side path kind of beckoned us in. We usually walk on the larger path to the right of this, but for some reason, on this particular day, this track seemed more inviting. It is probably because of all the spring green which made this area feel lighter than the somewhat darker area you can see to the right of this image.

I also shot this at ƒ/2.8 mostly because I was being lazy, but it does help to give us a sense of depth, with the foreground slightly out of focus. With more light here though, I adjusted my shutter speed to 1/100 of a second and ISO to 200.

Here is the first of the two Intentional Camera Movement shots that I was happy with. They are just trees a little further into the woods, but I was able to avoid including any sky at this spot. If you include the sky, in my opinion, it generally ruins the shot. It’s too bright and spoils the overall abstract effect. I changed my aperture to ƒ/11 and my shutter speed to a 1/15 of a second, which is what I needed to give me some long blur as I released the shutter while moving the camera downwards. My ISO was at 500 for the exposure.

I actually prefer this next image though, which was of a patch of giant bamboo, again with a dash of spring color to make it worth shooting. I’ve tried this kind of shot in other seasons and didn’t really like the result. Of course, my favorite is when the ground is covered in snow, but that doesn’t happen so often here. I find the bright green at the bottom of the frame quite appealing in this shot though, and the various shades of yellow and brown, and a few green bamboo has come together quite nicely in this shot.

I would have preferred it if that patch of leaves towards the top left corner wasn’t there, but I’m still relatively happy with this shot. My settings were the same as in the previous image. I found the color contrast interesting in this next shot, with a few rusty red maple trees mixed among the fresh spring green leaves. It was also nice to be in the park pretty much by ourselves, thanks to it being overcast and a little on the cold side on the day we visited.

I switched to my RF 100-500mm lens for a while to pick out some leaves that were too far away to capture with the macro lens, as we can see in this next image. My favorite part of this shot is the shadow of the smaller leaf towards the end of this patch to the left, which fits perfectly inside the foreground leaves, making it somewhat difficult to understand what’s happening, but it’s nice to get the two strong shades of green like that, with crisp edges around the darker green shadow.

I was also careful with my background, ensuring that the leaves were against the trunk of a larger tree, rather than open space, which helps to keep the shot simple and uncluttered. My settings were ƒ/7.1 for a 1/125 of a second at ISO 4000, at 500mm. I did something similar, with this next and final image for today, still with the 100-500mm lens but with the focal length slightly shorter at 324mm, and I opened up the aperture to ƒ/5.6 for a shallower depth of field to capture these cameral tree leaves. Cameral tree is like a nickname for what the Japanese call a Katsura tree. These trees smell great though, and hence the nickname, although I have to admit I didn’t know these trees had that nickname until I looked up the English to relay to you today.

OK, so we’ll start to wrap this up there. I guess my parting message for this episode would be that although it was only a walk in the park, it’s important to keep open some creative options like intentional camera movement in mind, as these things can help to bring a little more enjoyment to our photography.

I’ve been so caught up in the development of PhotoClock Pro and now working on one last update before I start to develop an Android version, so I haven’t been able to do much photography in recent months, and that starts to become stressful. Photography has and probably always will be my main form of stress relief, in addition to being my main profession. Doing things that we love, regardless of what they are, is always a calming experience, and it was nice to come home and just spend a few hours going through my images and giving them a few tweaks. I also shot a number of tree bark shots which I collect. They actually look pretty good as a background in my PhotoClock Pro app as well, so I’m starting to form an album in Apple Photos so that I can easily drop them into a folder for my background.

On that note, last week I shared a video that included a part about integrating PhotoClock Pro with Apple Music and that has gone well. I am able to start playing music at a given time like an alarm, but it requires the screen to stay on, although we dim it down completely, so it is working well. I have a little more work to do to get it stable and hope to get something in for review in the next few days, so stay tuned if Apple Music integration is something that appeals to you. If not, it’s still a great app and works perfectly well without Apple Music.

Or on the App Store here: https://mbp.ac/aspcp