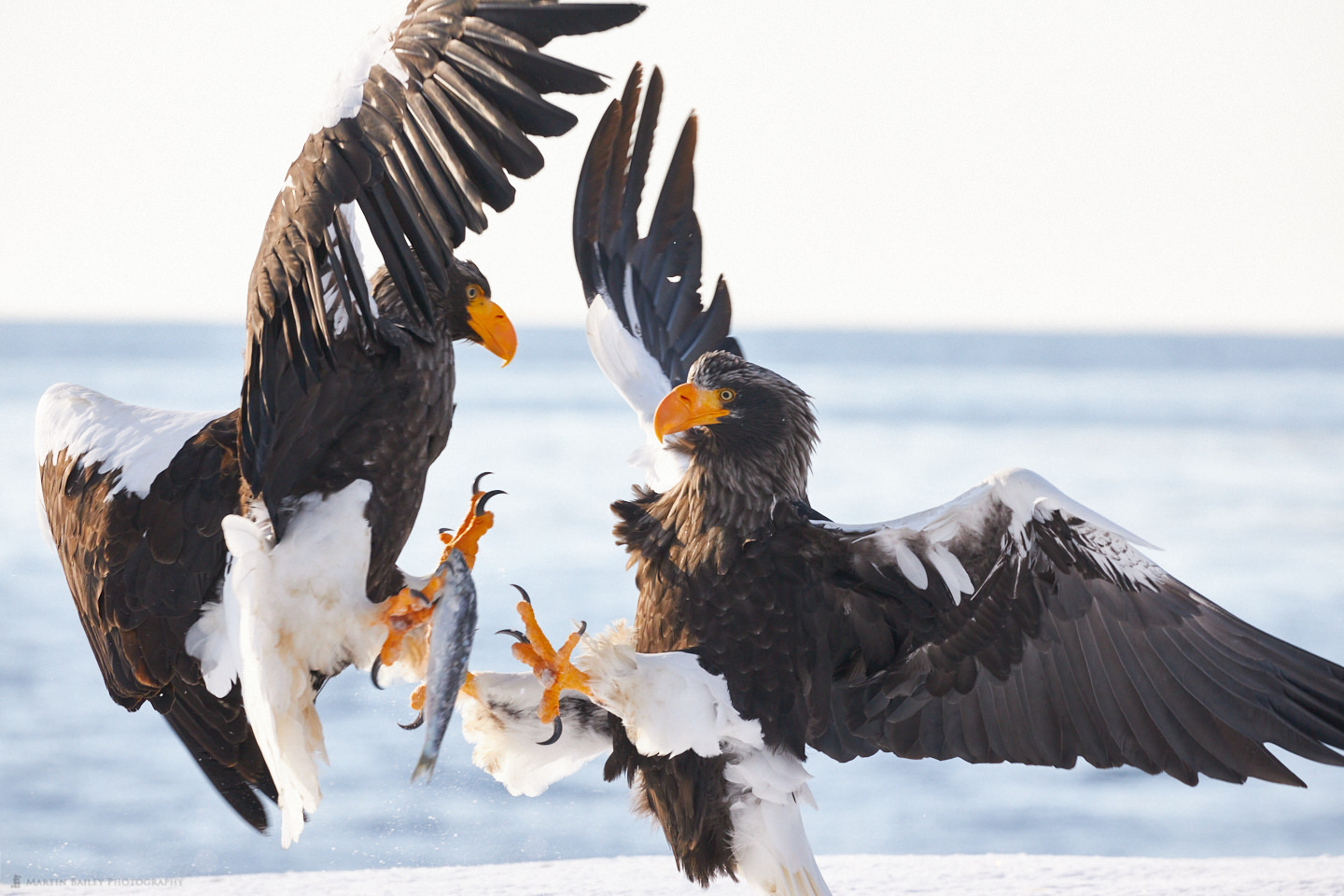 This week I’d like to start by giving us all a pat on the back. This is a milestone episode, as we just reached number 700! I’m pretty proud of the fact that I’ve been releasing this podcast almost every week for coming up to fifteen years now! I’m also incredibly humbled by the fact that many of you have been following my antics for most of, if not all of that time. Thank you so much for sticking around!

We’re going to do a regular episode though, and conclude my Japan Winter Wildlife Tour #2 travelogue series, with a visit to Lake Kussharo to photograph the Whooper Swans, and then on to Rausu to photograph the sea eagles. I once again have way more than 10 photos to discuss, so although we had some fun photographing the landscape a little after we finished at the sea eagles, I’m going to skip those photos and give preference to the wildlife work, because this is really what this tour is all about.

Let’s start with a shot from the Whooper Swans. As you can see, there was a slight mist over the lake, which was still not frozen, due to this being the warmest winter in Japan for thirty years. I love the graduated horizon line of the lake, caused by the mist and the swans here have an almost painterly look, due probably in part to the quality of light, but also the fact that I was panning with them with a 1/50 second shutter speed.

I wish I’d not clipped the wing of the swan on the right side of the image, but I’m pretty happy with this all the same. I also kind of like that it’s a grey cygnet that is leading the pack here, rather than an adult, which I think may have been a little bit too obvious as a composition. That was pure luck of course and totally a hindsight observation.

I’ve become quite partial to this next kind of swan-panning shot as well. As the swans start to waterski on the lake as they land, again, at a 1/50 of a second, the water makes some beautiful textures that I can kind of get lost in visually. I also really like the slightly ruffled feathers under the near-wing of this swan. The lake being thawed this year contributed to keeping the swans cleaner than they sometimes are when it’s frozen. I imagine it’s because they are not forced to sit around in the shallow water at the same location, rubbing against the algae and sitting in their own mess. Either way, this is a completely fun way to shoot these awesome, yet sometimes clumsy-looking birds.

In this same location the following morning I used an 1/800 of a second shutter speed to freeze the movement instead of blurring it, and fell lucky with this next shot, as four swans lined up with a mallard duck at the end looking as though they are just starting off on a race of sorts. The mist had cleared, though it was still overcast, and the faster shutter speed enabled me to freeze the mountains on the far side of the lake, so I consciously tried to keep my camera higher to include the top of the mountains in the frame.

The little guy in the next image is a Japanese Long-Tailed Tit, and probably one of the cutest birds I’ve ever photographed. I’ve seen these before in the trees near where we stop to photograph the swans, but never managed to get a shot so far. Fast-movers though, at 1/1600 of a second, this tiny bird is slightly soft, so I increased my shutter speed for a few more frames, but I like this one the best, as he flew down from his perch, on which he stopped for a less than one second at a time. A very difficult bird to photograph.

Another fleeting moment in this next image, as a Northern Red Fox found something in the hole that it was digging that didn’t agree with him, so he ’bout turned and shot off like a bullet. I was not ready for that speed again, so his head is blurred, but I think that, along with his pose, adds to the dynamic feel of the shot, so I’m going to run with it, like the fox.

It was so nice to have snow, like this, until the end of the season. Just a week until the start of March at this point, the warm winter had taken its toll, but the occasional cold front had kept most of our locations topped up with snow, and from the number of hand-warmers we got through on the bus, I think the participants probably didn’t believe me when I kept saying that it was warmer than usual.

Indeed, as we got into our first morning photographing the Sea Eagles the next day, with the wind chill and the cooling effect of the sea-ice, even this mad-dog and ex-English-man didn’t have the nerve to call it warm. We did have sea-ice, but to be completely honest, I wish it hadn’t come down in the Nemuro Straits at all this year. The warmer conditions had meant that the Steller’s Sea Eagles were nearing the point where they’d find a thermal to climb to set them off on their way back to Russia for the summer.

They weren’t moving much at all, and the staff of all the boats were starting to wind down for the season as well. I would not accept that the birds simply wouldn’t move, and managed to talk the skipper of our boat to let us charter his second boat for the group for the second two days. This won’t always be possible, but it did give us the freedom to call the shots and salvaged the situation. The ice was closer on the second day, but we spent some quality time near the harbor wall as well, and got this next image, which is one of my favorite Steller’s Sea Eagle shots of the season.

Once again, I’m going to live with the clipped wings and tail, as I think the bulk of the shot is interesting enough to not throw it out. I love the detail in these birds, and those talons and claws look absolutely lethal! These really are magnificent birds.

Later in the day, we headed back down the Notsuke Peninsula, where I’d photographed the fox two days earlier, and although I don’t usually stop for sea-eagles out there, we did find the White-Tailed Eagle in this shot sitting in a more interesting spot than usual. We waited until he flew, and sure, it’s a butt-shot, but this is one that I’m happy with. The surroundings, with the driftwood and perch, and those beautiful distant mountains on the Shiretoko Peninsula made for an almost perfect scene for this proud raptor to start his journey from.

I actually pulled back to 366 mm rather than trying to go full-frame, to ensure that I included more of the surroundings. I also used the Advance Color Editor in Capture One Pro to warm up the orange tones, as I found it a little bit too bleak for the wood, which I somehow felt needed to look a little warmer.

Although it was difficult to set up and actually get them to go for fish in the water this late in the season, and the eagles were pretty much constantly flying away from the sun, we did manage to get a few images of them taking fish from the water, rather than off the ice. I was not going to give up on these photos on this trip, both for myself, and most importantly, for my guests.

Hopefully, it will look pretty natural to you, but I had to increase the shadows slider to plus 80 to bring out even this amount of detail in the dark underside of this Steller’s Sea Eagle. Definitely a rescuable image, and pretty much as good as it was going to get under the circumstances.

At almost exactly the same location, just 50 seconds later, I got this shot of a White-Tailed Eagle doing pretty much the same thing, but with much better wing positions. The shadows slider is up at 70 for this shot too, and for both of these images I warmed up the blues slightly, again, using the Advanced Color Editor in Capture One Pro. I just felt that it needed a slight saturation boost.

As I said, we’ll skip three landscape images that are sitting in selection in chronological order, as I like to keep my posts down to ten images when possible and finish with one last wildlife shot. It’s been a number of years since we’ve seen any, but finally, our luck was in with a sighting of a Great Spotted Woodpecker in the Shiretoko National Park on our final morning of the tour.

Although the foreground branch is slightly obscuring the back of her head, I really like how this woodpecker is peeking back at us through this window between the arch of a broken branch and a second branch that is holding it up. The smattering of falling snow is a nice added touch to help us wrap up this three-part travelogue series covering my last Japan Winter Tour for this season.

Before we finish though, I did my traditional walk around the bus to get a comment from the participants, which I’m going to play you now. Please listen with the audio player above, starting from 10:17, to find out what each guest had to say about the tour.

If you’d like to join me on the 2022 Japan Winter Wildlife Tour, when we next have spaces available, please check out the tour page, and contact us if you’d like to be put on the waitlist for the 2021 tour.