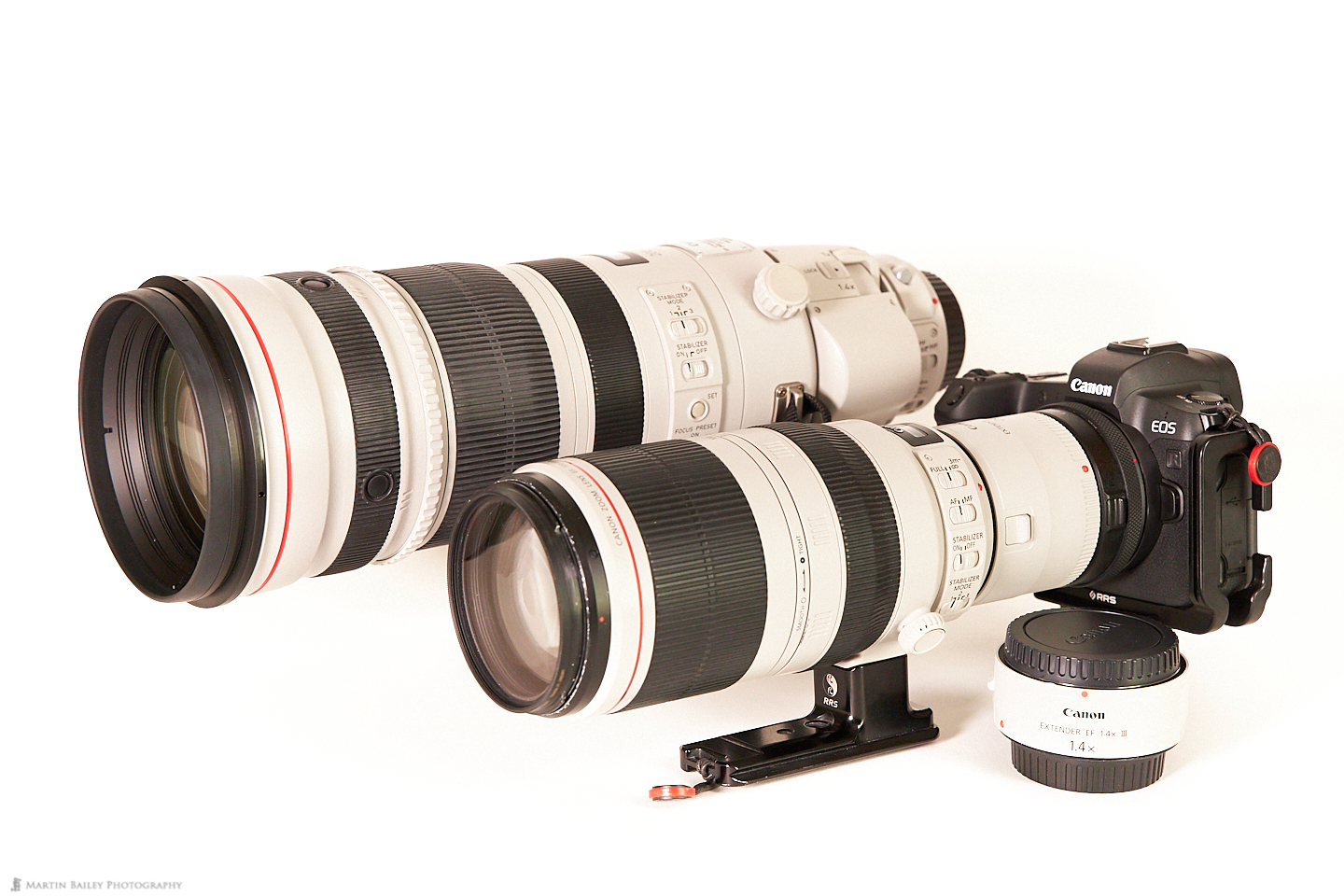 This week I answer a question from listener Derek Bezuidenhout, who recently asked what happens with mirrorless cameras when we add an Extender or Teleconverter, so I’m dedicating this week’s episode to answering that Derek’s excellent question, which I’ll read out to you now.

As we know, when using an extender we typically lose 1 stop of light for a 1.4X extender or 2 stops of light through the lens for a 2X extender.  And when using an extender on a DSLR, because of the way the focusing mechanism works, either the camera won’t be able to focus at all, or it will only be able to use the focus point.
With mirrorless cameras, the focusing mechanism is completely different – it uses the main sensor instead of focus points. So does that mean that with an extender on a mirrorless body we would be able to reliably use all (or most of) the available AF points, rather than just the middle one?

I can’t believe I didn’t think to mention this in my EOS R reviews, but I didn’t, so I really appreciate this question. Thanks, Derek! I’m sure you’ll be happy to hear that you surmised exactly what happens as you posed your question.

The camera manufacturers have made strides in their recent years, enabling most modern DSLR cameras to focus with extenders down to an aperture of f/8. What this means, is if you are using an f/4 lens, and put on a 2X Extender, which reduces your aperture by two stops, your camera’s widest aperture changes from f/4 to f/8, and you maintain autofocus on at least the center focus point, sometimes more, depending on the camera.

Because Mirrorless cameras focus differently, as Derek pointed out, at least as far as my Canon EOS R goes, it will continue to focus down to f/11 and what’s more, according to Canon’s website, you can continue to use autofocus across the full range of 88% x 100% on the image frame if you are using Mark III Extenders, which I am. This is the same as when you are using no extenders. Apparently with Mark I or Mark II Extenders that is reduced slightly to 80% x 80% of the total image frame, which is still very good in my opinion.

When we consider that many DSLR cameras bunch the autofocus points up towards the center of the frame, it becomes quite limiting to where you can place your subject in the frame, especially when photographing something like birds in flight, when you actually might want to place the subject much closer to the edges sometimes.

I tried to think of a way to show you the speed of the autofocusing system and how wide an area the camera will focus across, and figured it was probably best to just show you in a video, so I hooked my EOS R up to a video capture box and recorded my screen as I switched between my 100-400 f/4.5-5.6 Mark II Lens with no Extender fitted, to using it with the 1.4X Extender, and then the 2X Extender. I also show the 200-400mm with its built-in 1.4X Extender engaged, and a 2X Extender fitted, so both are focussing at f/11 with the 200-400mm lens at a focal length of 1120mm.

Finally, I disengage the built-in 1.4X Extender to show you the effects of just having the external 2X Extender fitted. For all of these demonstrations, I was using the Canon Control Ring Mount Adapter to fit these EF lenses to the RF Mount of the EOS R.

Things to note are that autofocus does slow down very slightly, especially when using the 1.4X and 2X Extenders together. Also note that I did these demonstrations in my studio with bird ornaments, so in reality, when the autofocus has further to physically travel, it can be a little bit slower than you’ll see in the video as well. Anyway, here is the video, so please take a look.

I hope you found that interesting or at least useful to see. I find it amazing that we can now use autofocus at this level, down to f/11 apertures.

I noticed too that Canon have just announced a firmware update to improve autofocus further. On the US website it just says coming soon, but in Japan it is slated for the end of September. Here is what Canon are saying:

A new firmware update for Autofocus (AF) with the EOS R and EOS RP cameras will soon be available. This exciting new update will offer enhanced AF functions to help you better view, track and capture subjects. The three main components are:

This firmware will be available via a free download in the coming weeks. Stay tuned.

I look forward to seeing how these changes affect autofocusing, and I can’t wait to see where the autofocus on mirrorless cameras leads us next. I honestly did not expect autofocus on these cameras to be anywhere near as good as it’s proven to be. Being able to focus on a sea eagle a split-second before it snatches a fish from the sea, as in this photograph from this years Japan Wildlife Tours, I had no complaints, but improvements are always welcome.

Anyway, we’ll wrap it up there for this week. Thanks once again to Derek for the great question! Also, note that I’m running behind on the development of my new Mentorship system. Various things and other commitments have kept me a little too busy lately, but I am working on it and hope to release something very soon.

Get this post's short-link:
← Having Fun With Conference and Scheduling Tools (Podcast 673) An Interview with Aaron Nace of PHLEARN (Podcast 675) →
Become a Patron