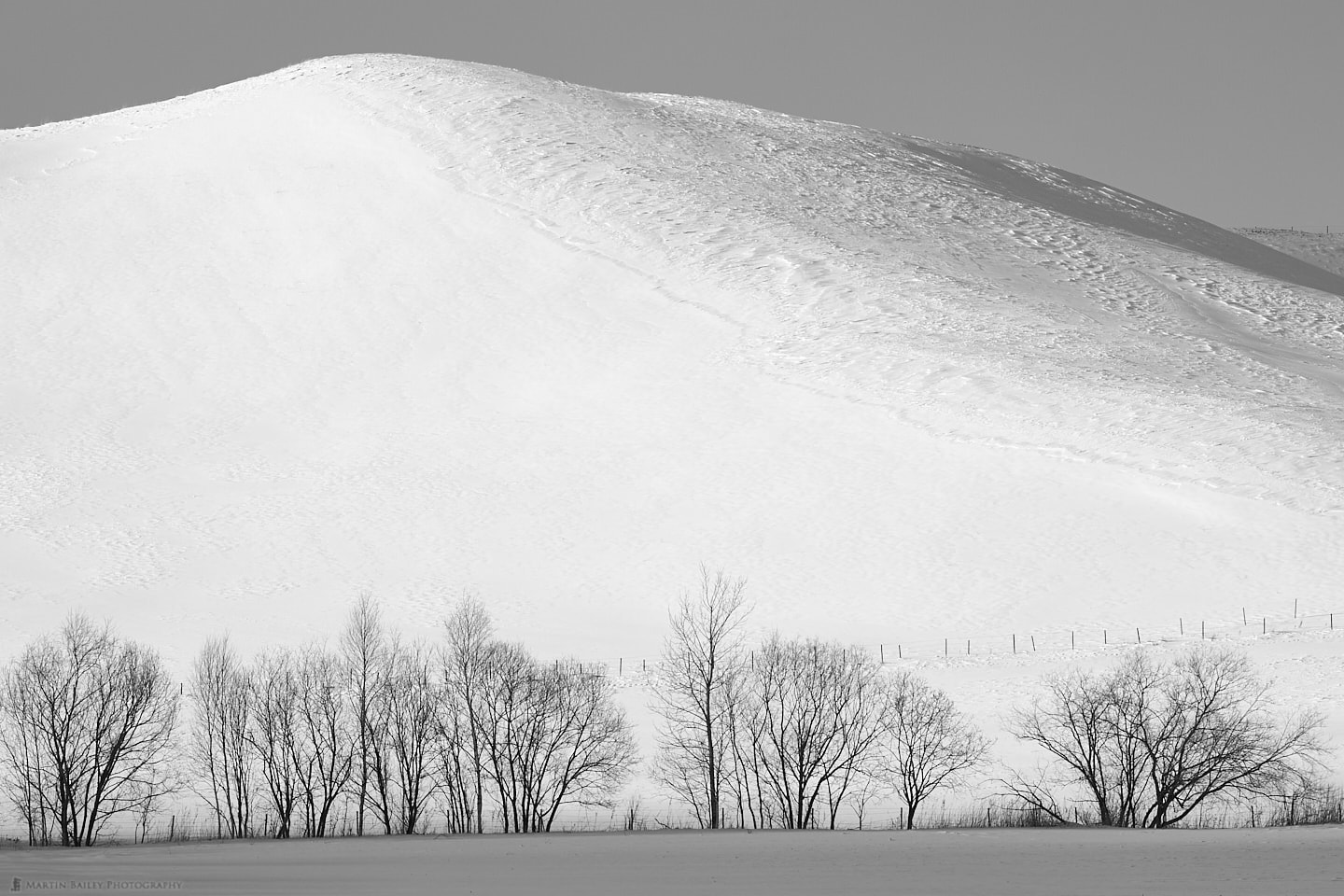 Today we conclude our three part series of travelogues to walk you through my 2019 Hokkaido Winter Landscape Photography Adventure Tour & Workshop.

We pick up the trail as we leave Wakkanai and head around Cape Soya at the northern-most tip of Japan, making a few stops to photograph the fishing boats that are brought up onto the land to stop them from getting crushed by the sea ice.

Fishing Boats On Land for Winter

The high winds that they’d had shortly before we arrived in this part of Hokkaido had blown the snow away in some coastal areas, so there wasn’t a great covering of snow beneath or around these boats, and unfortunately this was one of the days that we had an almost clear blue sky. I did a long exposure to try to get some movement in what little cloud there was, and it registered slightly just above the boats, but not much to speak of.

Because there was a messy foreground, I cropped tightly the bottom of the boats in camera, and I cropped down from the top to remove the boring sky in . At this point, this is more of a documentary shot to show you what we were photographing, but I don’t really like it that much as a photograph.

My settings were 25 seconds at ISO 100, with an aperture of f/20. I stopped down this far to get a long shutter speed. If I recall I was using my 10 stop Neutral Density filter, but it was so bright I had to either stop down the aperture more, or nest a 3 stop filter on top of that, and I went for the former option. My focal length was 50mm.

We had a reasonably long drive down the East coast of Hokkaido, to the small port town of Ohmu, where we’d spend the next two nights. The main attraction here is the small with some beautiful strategically placed tetrapods in the sea and the black rocks on the beach. In this first photo you can see the sea washing up around the rocks, but also the line of tetrapods reaching out into the sea to the left, and some of the other tetrapods in the distance.

There’s also a lighthouse on the end of the quay wall, that adds a nice frame over the water and helps to bring the eye back around to the tetrapods. As the light was fading towards the end of the day, I didn’t use a Neutral Density filter for this shot, and at this point, with the ambient I was getting a shutter speed of 1.6 seconds with an aperture of f/16, at ISO 100. The focal length was 24mm.

Another thing we like to do from this location is drive inland to see what the conditions present us with. As you can see from this shot, the grasses were showing through quite a lot again, but I enjoyed these scenes, as they give us something to play with compositionally.

The trough that we can see working its way through the snow in the left foreground is caused by a brook that has completely covered over with snow. The longer grasses are obviously growing along the stream as a source of water. I painted a mask over the sky in this to darken down the clouds a little. The shutter speed was a 1/50 of a second at ISO 100, and an aperture of f/14, at 45mm.

Towards the end of the day, we were back at the harbor, and here I had framed up the seven tetrapods that I sometimes think of as Seven Samurai. I don’t quite know why. Maybe I see these shapes like the Kabuto Samurai helmets. Also probably how they are just standing their, calm and cool.

Trees in Shadow, Mountain in Light

As the snow that we’d hoped for more of started pounding down on the areas that we’d just left, we made our way to our final location for the last two days of the tour. Our first visit to the port that we start with was a bit of a flop. When we arrived we had a beautiful heavy grey sky, but like magic it cleared up as we got out of the bus and started shooting, leaving us with way too much contrast making the boats look pretty bad. None of the shots from this shoot made my final selection.

I was happy with the contrast that the sun provided at our second location though, and because the clouds were rolling across the sky their shadows were dancing down the side of the hill that you see in this next photograph. I played with a number of styles of shadow, and one of my favorites was when just the line of trees and strip of snow in the foreground were dark, but the hill brightly lit, and then all contrasted against a dark grey sky.

I do like it when everything is very similar tones, like some of the shots from last week, but when the conditions don’t allow for that, I feel it’s important to be able to still make the most of what you have, and playing with these contrasts was very enjoyable, and I do like the results.

Fishing Boats in the Snow

The following day brought us a little snow, so I took the group back to the fishing port that we’d visited and got harsh light the previous day, and as we shot, the snow started to get heavier and heavier, enabling us to get the sort of shot that I much prefer, with the snow visible in the scene.

Of course, for this shot, I’d positioned my camera so that I was looking along the line of boats, and also went low, to accentuate the small drifts of snow between the boats and their shadows, which helps to complete the feeling of the repeating pattern. My shutter speed in the snow was a 1/15 of a second at f/14, ISO 100, and a focal length of 88mm.

One of the reasons that I make sure we get two days in each location is exactly because of this kind of scenario. When you rely on the weather doing something specific, and you only have one shot at it, you are much more likely to come away with nothing. When you have two days though, you can learn what the location is like on the first visit, even if the conditions aren’t great, then come back and get your shots much more efficiently when the conditions align with your hopes and expectations.

This also gave us enough time to visit the tree that you see in this shot, which I thought looked beautiful with its of snow on its branches, but more so because of all the tall brown grass around it.

The falling snow that we left in the port, was, as I expected relatively fleeting, but leaving when we did, us to get a dramatic sky in the background of this shot, but the snow gradually clearing to the right caused the sky to brighten slightly, showing the transient nature of our conditions.

My settings for this shot were 1/50 of a second at f/14, ISO 100 and a focal length of 35mm. I continued to be highly impressed with the image quality from the EOS R and found shooting with it throughout this trip completely enjoyable.

As I walked back to our bus from the tree, the scene across the road caught my eye. I’ve looked at this many times, and photographed it a number of times, but it’s never really amounted to anything, until the grasses showed through like they are in the photograph.

Of course, in addition to the grasses, the thing that made this shot for me is the snow, driving diagonally across the frame, reducing the contrast between the foreground and the distant trees. This provides a painterly look that really appeals to me. In fact, I almost called this image Turner Trees, but I figured that was perhaps a little bit too pretentious. My settings for this shot were 1/30 of a second at f/14, ISO 100 at a focal length of 74mm.

Because we’d also got more texture in the sky, we revisited the location that we’d shot on the previous day, with the shadows on the hill, and this time I’d like to share an image of the scene just to the right of the earlier scene that we looked at.

The sun was still playing games with the clouds causing some dramatic shadows, but the texture in the sky really helped to add some drama to this shot. The texture on the hill as the snow had blown away from parts was also fun to play with again. My settings were f/14 for a 1/125 of a second at ISO 100, and a focal length of 263mm.

By the time the final morning came around, and we needed our plane to fly back to Tokyo, it was a relief that the snow storms affecting most of the rest of the island were holding off a few miles north of where we now were in the middle of the east coast of Hokkaido.

The winds did provide some dramatic waves on the way to our main stop for this last morning, so we stopped the bus and shot this image from the road, capitalizing on the rough weather. I had now packed my tripod away in a box to leave with the bus company until the next tour which I’ll be through when I release this episode, so I shot this handheld, and of course turned of my two-second timer, so that I could time my exposure to capture the waves in pleasing locations in the frame.

I also increased my ISO to 200, for a shutter speed of 1/100 of a second to help me almost, but not quite freeze the movement of the sea. I feel that understanding how much things like snow and water move during the exposure can really help us to craft and mold our images into something that we can more easily previsualize with the help of these tools in our mental toolbox.

That brings us to the end of my 2019 Hokkaido Winter Landscape Photography Adventure. As usual, I did my walk around the bus with a digital recorder to record a comment from each of our guests, and I’d like to play you that now.

It was lovely hearing from each guest again there, and I really appreciate their kind comments. Thank you all!

As the 2020 tour is now full, I’ve started taking bookings for 2021, so if you are interested in joining us, please check out the tour page at https://mbp.ac/hlpa, and use the Reservation button towards the bottom of the page to pay your deposit and secure your place.