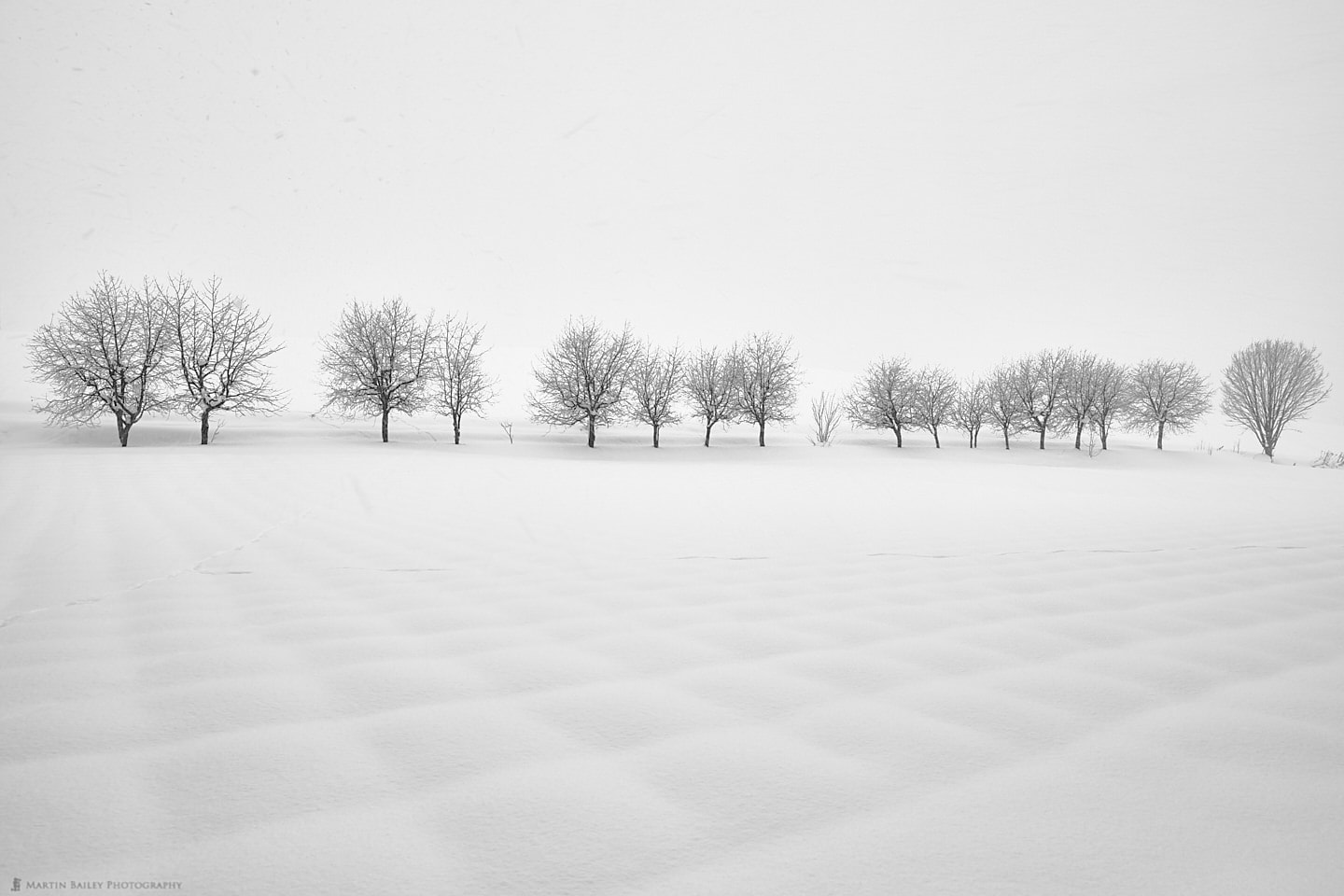 Just back from my 2019 Hokkaido Landscape Photography Adventure Tour & Workshop, today we start a three-part travelogue series with a total of 30 images over the next three weeks to illustrate our adventure.

As usual, we kicked off this year’s tour in the picturesque Biei area, with its beautifully situated trees that decorate the rolling snow-covered hills. It’s often hard to understand without seeing the difference, but the grey sky that you see in this first image from Biei is what really makes these images possible.

Most years, we actually have so much snow that the grasses don’t show through like this, but with relatively little snow this year, many were poking through, and they made for nice additional elements to punctuate the scenes that we shot.

Apart from a few test shots, I shot this entire trip with the new Canon EOS R mirrorless camera, and I have to tell you, that at this point, I’m very happy with it. I’m going to do a full review later after I’ve seen how well it handles fast-paced wildlife shooting, but for Landscape, it was an absolute pleasure to work with.

There were a few problems, like not being able to see the border around the histogram on the LCD in bright conditions, but nothing that I would consider really major, and the image quality is absolutely stunning.

We travel in a large bus so that everyone has a double seat to themselves, and at this location, shortly after photographing the tree in the previous image, I had our driver drop us off along a road in the hills, from where we just walked in short bursts while photographing the various things that we can see from the road, such as this hut with a small tree.

I love the mound of snow that the hut is perched on, and again the grasses that are poking through the snow. I also find the footprints that run diagonally through the snow from right to left appealing, and again, the subtle difference between the snow and the grey sky is something that I love to shoot.

I’m doing all of my processing in Capture One Pro, including flicking on the Black and White checkbox to completely remove the color, but there really isn’t a lot of difference. The original scene had hardly any color in it anyway. My settings for this were f/11 for a 1/30 of a second at ISO 100, at 255mm with my EF 100-400mm Mark II lens.

The minimalism of this next shot really appeals to me as well, with the of trees on the left, and the incredibly faint line between the hill that extends up from the copse, against the taller hill in the background. And again, that beautiful grey sky.

I actually adjusted the mid-tones with the Levels sliders in Capture One Pro to darken the sky down a shade or two to accentuate the curve of that middle distant hill, as it extends left behind the trees. My settings for this image were f/14 for a 1/50 of a second at ISO 100, at 74mm, again with the new RF 24-105mm lens.

Having less snow than usual presented us with an unexpected gift as the snow started to fall and we headed behind the Takushinkan Gallery to photograph the line of trees there. they grow lavender there in the and run a mechanical cultivator between the lavender forming these squares, then the snow fell, and created a beautiful patchwork of snow.

You might also be able to make out the flakes of snow more visible in the sky than the foreground, but it was falling quite heavily when I shot this, so I was doing my trick of blowing snow from the front of the lens in the cover of a cloth, then holding the cloth over the lens while starting my two second timer, then whipping it away at the last moment to make my exposure. Without doing this the snow driving straight at us just sticks straight onto the lens and ruins the shot.

On our third day in Biei, we drive around to the ski slopes at Mount Asahi, where I used to enjoy photographing the pillows of snow that form on the rocks in the river before we start to drive up the mountain. For the last few years, they’ve been building a new bridge and the conditions haven’t been great, but this year, the bridge is finished, and we had some lovely snow pillows again, as you can see in this next image.

I’ve chosen a landscape oriented image as it works better for the blog, and I like how we can see the pillows of snow extended up the banks where the snow has completely covered the river.

Because I always expose to the right, which is especially important when photographing snow scenes, the snow requires a Luma tone curve with a small dip in the slightly darker snow to bring out the very subtle tonal differences. The selected node in this tone curve screen capture is the one responsible for this adjustment.

My settings for this image were f/14 for a 1/4 of a second at ISO 125, at 105mm. The ISO of 125 was accidental. The new RF lenses from Canon have a control ring on them that I have programmed so that I can turn it to change my ISO, but I must have caught it as I adjusted the lens, and didn’t notice until after I’d shot these images.

After photographing the Snow Pillows, we headed up the mountain and parked in the cable car station car park, then walked a little way up the ski slope to photograph the trees in the snow there. This is another one of my favorite spots from this trip, although it can be tricky to compose as it’s difficult to decide where to start and where to end your frame.

One of my favorite trees is this one with the dark bark, which provides a beautiful contrast against the snow piled up on its branches, and there is a smaller tree now growing next to it. I positioned myself so as to get the Christmas trees in the background nicely framing the foreground dark tree, and left just a little more space either side of these. I shot this at f/14 for a 1/30 of a second at ISO 100, and a focal length of 47mm.

I have another composition that I like to shoot here, but I’ve shared that many times, and on this trip, I actually shot that composition with both the EOS R and my 5Ds R so that I could do a print comparison later.

The 5Ds R is obviously zoomed in more because it’s a 50-megapixel file compared to the 30 megapixels of the EOS R, but I think you’ll still agree that the EOS R with the new RF 24-105mm lens has the edge. It’s slightly sharper with more defined edges. You might need to click on the image and open it up in the lightbox to view the details.

This next photograph seems like a scene from Narnia to me, almost like an Enchanted Forest. There is a stream that runs through the trees here, but it’s almost completely covered in snow, forming this zigzag of huge snow pillows.

Again, I’m attracted to the darker trees and how they contrast with the snow, but also here the lighter birch trees add a subtle extra element of contrast. My settings for this were f/14 for a 1/30 of a second with ISO 100 and a focal length of 70mm.

As I mentioned, there was less snow in the lower hills around the Biei area, and although this can be trickier to work with, as usual, it presented us with some new opportunities, as in this photograph, where the lines of grasses and smaller trees that are usually buried, are forming lines, working their way through the snow.

I was shooting with an aperture of f/14, a 1/15 of a second exposure at ISO 100, and a focal length of 50mm. With such a slow shutter speed, you can probably appreciate how little the light was through the snow clouds, despite it still only being mid-afternoon.

This next image is a take on a subject that I haven’t photographed for a while. When the snow comes in, it completely obscures the distant mountains that are usually visible behind this copse in the hills of Biei, completely minimalizing the scene.

I’ve used the Levels sliders to bring out the tones a little and darken down the trees adding contrast to the image, and I really like how we can again see the plow lines under the snow. My settings for this image were f/14 for a 1/4 of a second at ISO 100, with the lens zoomed all the way in to 105mm.

I actually had a embarrassing moment with the EOS R as I shot this scene. The EOS R doesn’t autofocus great in heavy snow, so I’d switched it to Manual focus, to do a short video of this copse in the falling snow. When I went back to shooting stills I left the lens in Manual focus and tweaked the focus manually, and when I did, looking through the electronic viewfinder, I thought that the warm light of was somehow shining through the trees.

I had to laugh at myself though when I realized that I’d just found out that the EOS R has focus peaking, where things in focus are outlined in red, but this only kicks in when using Manual focus, so I’d not seen it before. It’s a very useful feature, but it’s somewhat embarrassing to have thought I was seeing the warm glow of a sunset in the middle of a snowstorm.

Behind the hotel that we stay in during our three days in Biei, there’s a waterfall called the Shirahige Falls. The water that flows through the falls and river below has a slight blue tint due, I believe, to the mineral content, so it adds a nice splash of color to this magical winter scene. I’ve enhanced the blue slightly here to increase the color contrast.

This is actually the first time in many years that I’ve shot these falls in their entirety. I usually zoom in much tighter, but the huge icicles to the right of the falls were appealing, and I also liked the trees framing the falls here, so I opened up the lens to 24mm for this image. My other settings were f/14, for 0.4 seconds at ISO 160.

This time I’d moved my ISO on purpose, to avoid having too long a shutter speed, which records more movement in the mist from the water, and that reduces the clarity of the falls.

OK, so that’s our ten photos for this first travelogue episode, and I slipped in a few bonus screenshots, so we’ll wrap it up there for this week. I’ll be back next week with the second part of this series, as we leave Biei and head over to the west coast of Hokkaido.

Buying with our B&H Photo Affiliate links helps to support the podcast at no additional expense to you. Thank you!