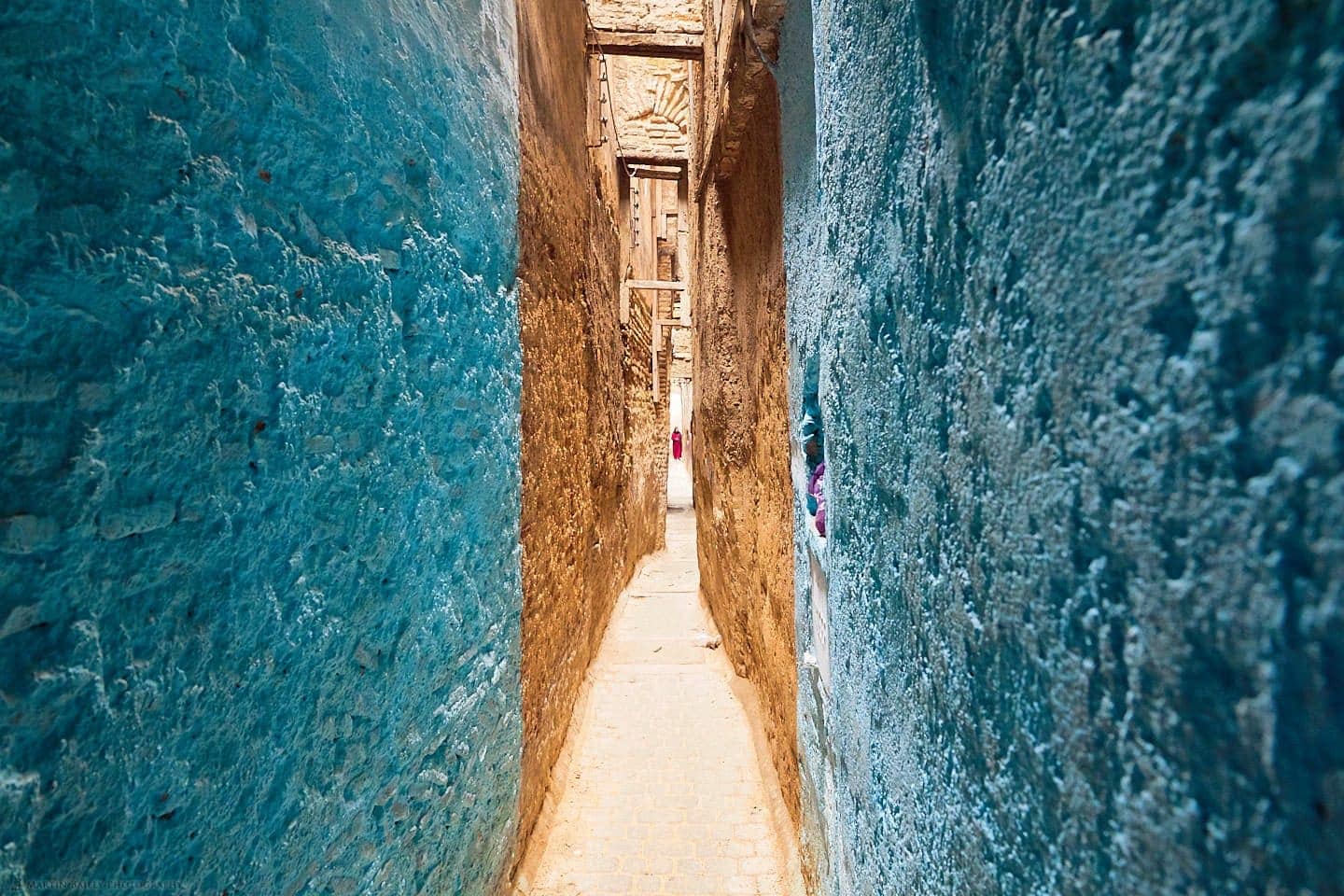 Today we continue our Morocco Travelogue series as we visit the Chouwara Tanneries, a weaving workshop and some other cultural delights in the ancient city of Fes.

We pick up the trail as we visited the Chouwara Tanneries, which as you can see from the first photo for today, is a hive of activity as various companies share the complex of vats in which the workers are processing their leather (below).

For this image I used my Canon EF 11-24mm lens at 15mm, to include as much of the tannery as possible, just to get a more descriptive overview of the place. Because I was looking down on the complex, there is quite a bit of distortion, even after having removed a bit of it with the Keystone correction tool in Capture One Pro. My other settings were an aperture of f/8 for 1/125 of a second at ISO 125. F/8 is slightly wide for this type of image, but at 15mm that still gives me plenty of depth of field, so it’s fine.

As you can see from this and the next image, the tanneries are a hive of activity, as the workers all go about their daily tasks. Here we see two of them cleaning up the leather hides that they are processing with rather large knives.

I’d switched to my 24-105mm lens for this shot, and zoomed right 105 mm to get as much detail as possible this time. I love the texture and grittiness of this place, and for some reason, I’m really attracted to the reflection of a window in the vat close to the top right corner of this image. My settings were f/10 for a 1/125 of a second at ISO 1000.

I shot this next photograph for a couple of reasons. The first being, that it helps us to see the relationship between the men obviously overseeing the workers, and the workers themselves. As the tanneries are a conglomerate, I’m sure there are lots of small groups that work together, sharing the facility, but there is a definite hierarchical structure within each group.

The other reason I shot this is was happy to see so many of the workers wearing waders this year. Maybe it’s because it was a little cooler, as this year’s tour was a few weeks later than last year’s, but if this is a new development, it’s great to see. We did still see some people in the dye vats just wearing shorts, like the guy just above the middle of the frame here, and that cannot be good for them. My settings for this photo were once again 105 mm at f/10, 1/125 of a second and this time with an ISO of 500.

Following our theme of visiting local workers and craftsman, later in the day, we visited an old building in which we were able to photograph two weavers making cloth on their looms. It was quite a place to visit, as these people worked mainly by the light from a skylight that we’ll take a look at in a moment, but with such low light, even at 1/50 of a second at f/5.6, I had to crank up my ISO to 6400 to get this photograph (below).

Again, I find the grittiness of this environment and the quality of the light very appealing. These looms are powered by a foot pedal, and and I found it quite peaceful for the only noise in this workshop to be the sound of two man-powered looms rattling away creating their cloth one line of thread at a time.

Here now is what I saw as I looked straight up having taken a few steps back from where I shot the previous image. To maintain the grey in the cloudy sky, I exposed this so that the sky through the skylight was not over-exposed, but that left the rest of the image very dark, so I cranked up the Shadows slider in Capture One Pro to its maximum of 100, so that we can see detail in the pillars and what would be the third floor of this rather run-down building that housed the weavers.

I found it fascinating that these people were working in this building, and also that there was some kind of vine growing up towards the main light source, which is this hole in the roof. My settings were f/5.6 for a 1/200 of a second shutter speed at ISO 100, with a focal length of 11 mm.

Of course, visiting all of these locations is possible because I hire an amazing guide in Morocco, with lots of contacts, and he knows what we want. I was reminded of this many times on this day in Fes, but one opportunity that really brought this home for me, was when he led us down an alley into a doorway, where we saw this many stoking the fire in a furnace that was heating the water of a public bath.

With the floor being covered with the wood-shavings that the man was feeding the fire with, it’s surprising that this entire building hasn’t gone up in smoke, but I guess they’ve been working this way for centuries, so I am obviously overthinking things.

My settings for this image were f/5.6 for a 1/160 of a second at ISO 2000, and a focal length of 41 mm. Fire can be quite challenging, but as usual, I just exposed this so that the brightest part of the scene, the fire, was just on starting to become over-exposed, then I increased the Highlights slider in Capture One Pro to bring the fire back under control, and increased the Shadows slider to brighten up the rest of the image, which had fallen a little dark as I exposed for the fire.

As group and I aren’t Muslims we are not allowed inside most of the mosques that we see on our travels, but under our guide’s advice, there are a few that we were able to photograph from the doorway, and I quite liked this photograph, which I was able to time to get a man walking across the end of the corridor.

My settings for this photo were f/8 at 1/125 of a second, and ISO 6400, so there is a little bit of grain showing up in the shadow areas of this image. I like the striking red carpet though, the arches, and then the warm glow of the light at the end of the corridor.

This next image has turned out to be one of my favorite shots from the entire trip. Our guide led us down a very narrow alleyway, which at some points was not much wider than shoulder width. My group and I took turns to stand at the end and get a few shots each. I was fortunate that a lady in a red Djellaba appeared at the end of the alleyway just long enough for me to add a striking color contrast to set off the blue and orange color of the alley walls.

I actually like this so much that I released this as my December desktop wallpaper, and currently have it as the desktop background on my computers. My settings for this were f/8 for a 1/20 of a second at ISO 6400, and a focal length of 24mm.

By the nature of touring Morocco a bus, we inevitably have some pretty substantial drives between our locations, but we generally break these up by stopping for meals at interesting places, among other things. On our way from Fes to Erfoud, we stopped in a small town called Zaida, where I photographed this man with a great characteristic face cooking some vegetable Tajines. The Tajine is a traditional Moroccan dish and can be found in lots of variations at most restaurants.

For this image, I opened up my aperture a little to f/5, for a slightly shallow depth of field, and at ISO 100 that gave me a shutter speed of 1/800 of a second, so you can tell it was a bright sunny day. That’s also what’s responsible for the accentuating the lines on the man’s face, as the sun shone down on him from high in the sky.

Around two-thirds of the way into our drive from Fes to Erfoud, where we would give up our bus for a few days, and venture into the Sahara in four-wheel drive vehicles, we stopped to photograph this elderly gentleman tending his sheep and goats.

I found it interesting that the mountains and ground we were surrounded by were so arid, and yet there’s snow on the mountains in the distance. There’s also the unfortunate but inevitable contrast of the somewhat traditional Moroccan architecture to the left, and what are probably cell phone towers right next to it. My settings for this photo were f/14 for a 1/160 of a second at ISO 200, and a focal length of 78 mm.

We’ll finish here for today, as that was our tenth image, and we’ll pick up the trail next week, as we head into the Sahara and then continue our journey on to Marrakesh and beyond.

By buying from B&H with the gear links in this post you help to support the Podcast at no extra cost to yourself.