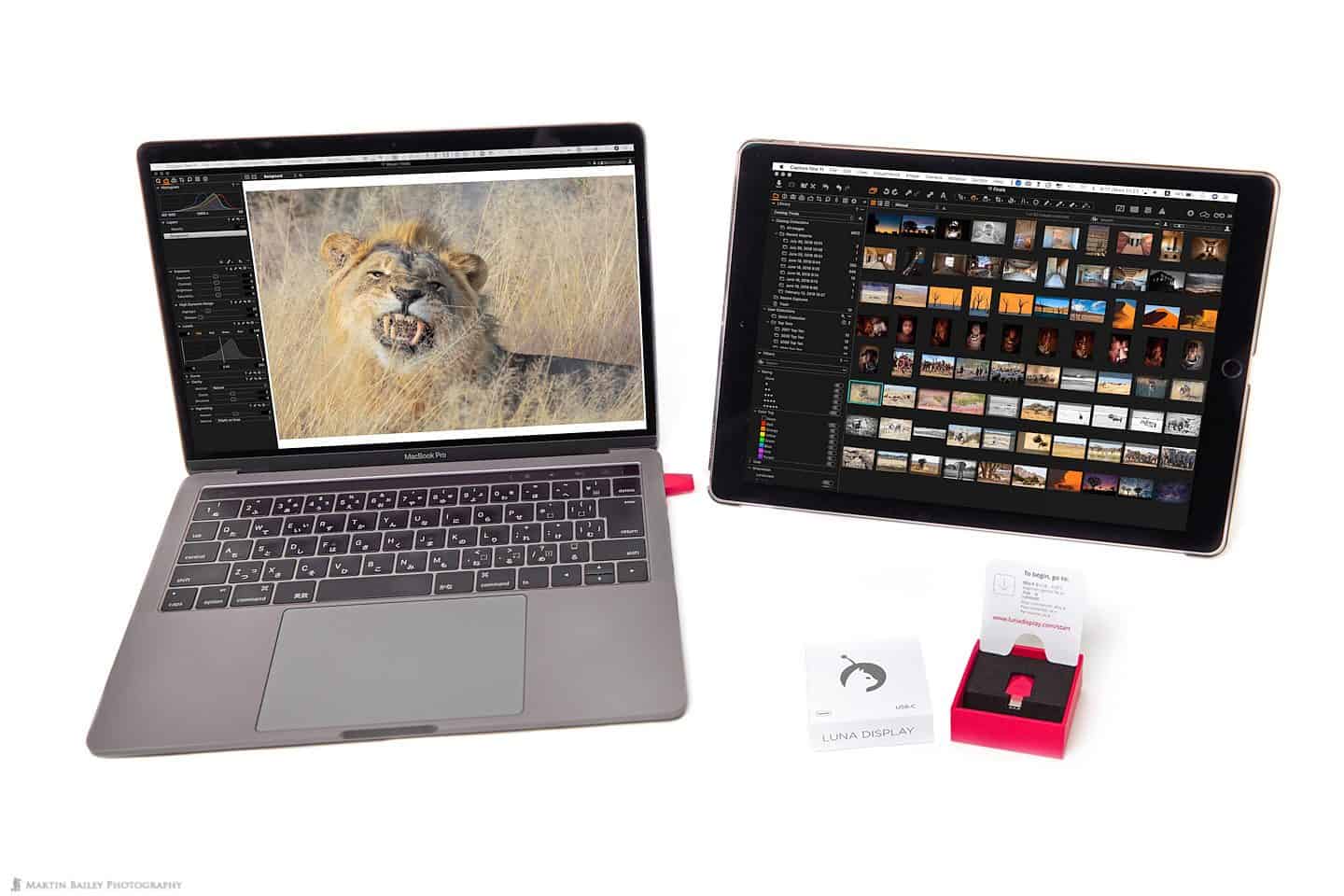 This week we’re going to take a look at Luna Display, an amazing little device that turns your iPad into a wireless second display for your Mac. I backed the Kickstarter for this around a year ago, and have been very excited to finally use it after it was delivered last week.

Before we jump into the review, I’d like to apologize for my radio silence over the last few weeks. I decided to add a couple more features to our Photographer’s Friend app version 3.0, and one of them took a lot more time than I had expected, and to complete this kind of work, I really just have to go down-periscope and devote every waking minute to the project.

The app is now with Apple for review though, and I’m hoping to release it in the coming days, so stay tuned. If you’d like to be notified when Photographer’s Friend 3.0 becomes available, sign up for our newsletters.

Anyway, back to Luna Display. Luna Display is from the same people that brought us Astropad, that I reviewed in Episode 483 some three years ago now. Astropad has been great, but a lot has changed, and frankly, I feel that in many ways, Luna Display pretty much makes Astropad unnecessary, as you can do everything that it does over a Luna connection.

Luna Display comes in a tiny little box, 65 mm square, and the device itself 14 mm wide at the base, and protrudes just 18 mm from your computer. It comes in both a Mini-Display Port and a USB-C version. I bought the USB-C version because I’m using newer Mac computers. Both my MacBook Pro and iMac Pro have USB-C, so it was the natural choice for me.

To get started with Luna Display, you just need to go to the web page written on the insert and download and install the Mac software, and an App for the iPad from the Apple App Store. Once you have these installed, you can start the Luna app on your Mac, and you will initially see the following message (below), asking you to Open the Luna Display app on your iPad. If you open the app on the iPad first, it just connects, rather than displaying a message.

I have to admit, when I first started Luna up, it was a bit glitchy, and I immediately started to feel underwhelmed, but then an update popup appeared, and since running that update, I haven’t had a single issue, so I was frustrated for perhaps 10 seconds, and then everything was fine.

There is a Custom button on the settings screen as well, that literally just opens up the Mac OS Displays settings, so you can fine-tune the position of the second display, and change the resolution if you’d like to. I have my iPad Pro running at its highest resolution through Luna Display, and as I mentioned, it works flawlessly.

There is really no time-lag to speak of, so it’s a working solution that opens a lot of doors for people that own both a Mac computer and an iPad. I take my iPad Pro with me when I travel, in addition to my 13″ MacBook Pro, and because the screens are almost the exact same size, this setup feels really comfortable to work on. As you can see in this next image (below) I can run Capture One Pro in multimonitor mode, and because the iPad is touch-screen, I can just tap on a thumbnail of an image to jump directly to that image.

It doesn’t stop with single taps emulating a mouse click. There is additional functionality built into the Luna Display software to enable multi-finger touch gestures, so for example, if you want to zoom in or out, you can simply pinch the screen, and zoom just like you would with images viewed directly on the iPad. This to me is really impressive, and although I don’t know how wide this support goes, if it works in Capture One Pro, I would imagine it will work in most other applications as well.

One last editing related aspect is that you can also use the Apple Pencil to directly edit images, which is incredible! I often do some pretty fine mask drawing while traveling, but this can be clunky to do with the trackpad, but it’s a breeze with the Apple Pencil! You can’t really see what I’ve done from this next screenshot, but I couldn’t help refining the mask around the Himba Girl shot from this year’s Namibia Tour.

Also, although you can change this in the preferences for Luna Display if you want to, by default, when you plug Luna into a USB port, the Mac software automatically opens and waits for your iPad software. The team seems to have thought of everything, as usual, so the entire solution is very smooth.

Of course, I’m talking about Luna from a photography perspective today, but anyone that can benefit from having a second screen, or maybe even a third, would find it useful. Here’s an example of how you might use Luna in a music production environment (below). Putting the interface for a synthesizer on the iPad actually gives great tactile access to to the presets and knobs, and although this particular company has a great iPad app that does most of this, it’s rare to have that, and I can do much more by simply touching the screen on the original interface, so this is also a setup that I will be utilizing moving forward.

Before we finish I would like to mention that this post is not sponsored in any way. Although I know the team that created Luna Display, I did not contact them for a device and they have not paid me to do this review. I signed up for the Kickstarter and waited my turn for my unit like everyone else. I can say for sure though, that it was absolutely worth the wait.

I believe the Mini Display Port versions of Luna Display are still on back order, but looking at their website it does look as though they have stock of the USB-C version, so if you want one, it might be a good time to head over to lunadisplay.com and place your order.

See details or order your Luna Display at https://lunadisplay.com

Did you find this post useful? Please support Martin Bailey Photography on Patreon!

Martin Bailey is a nature and wildlife photographer and educator based in Tokyo. He's a pioneering Podcaster and blogger, and an X-Rite Coloratti member.
PrevPreviousUnderstanding Exposure Value (Podcast 630)
NextPhotographer’s Friend 3 for iOS Now Available! (Podcast 632)Next