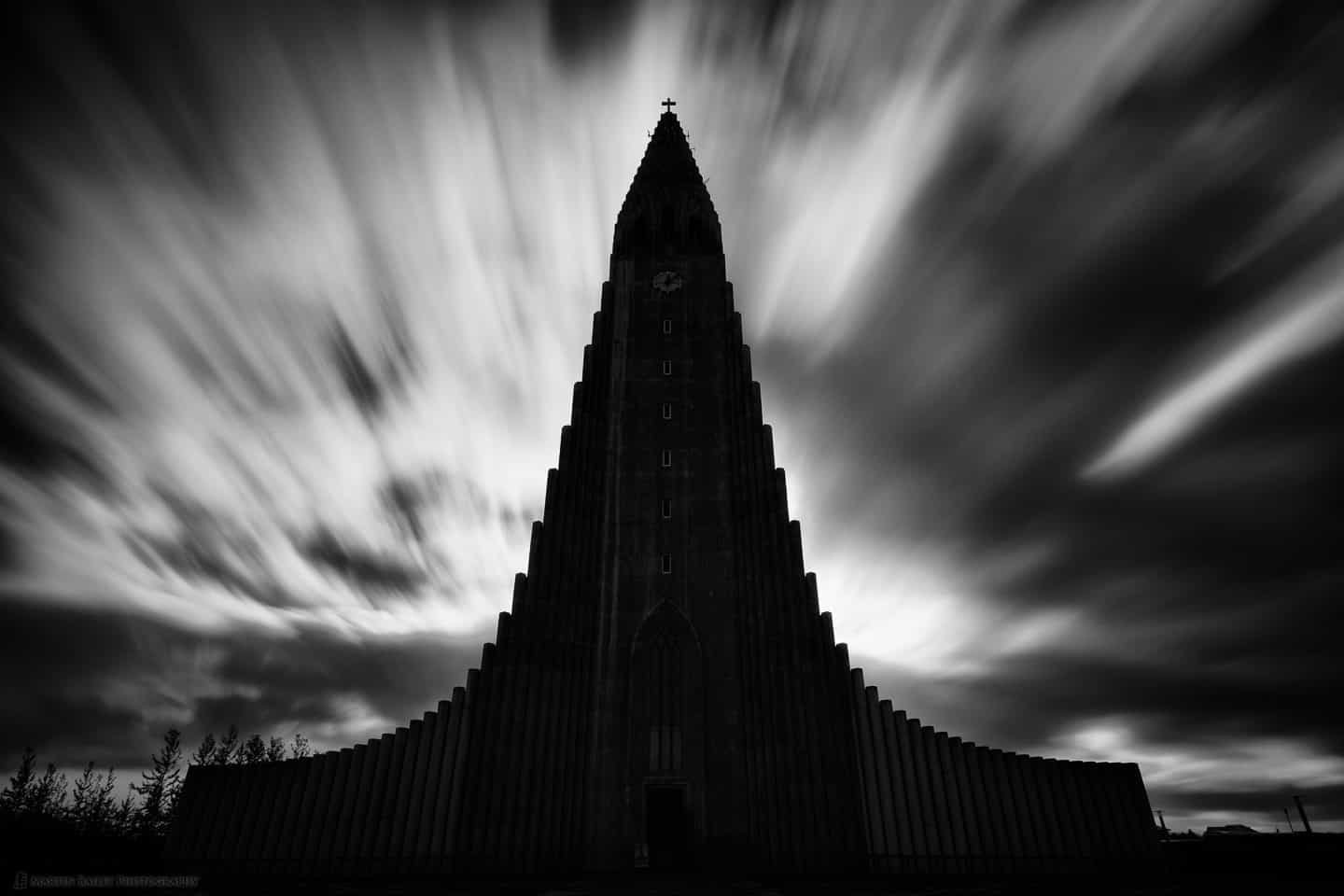 Having just got back from my 2015 Iceland Tour, today we’re going to kick off a four part series of travelogues to walk you through a total of 40 images selected from my 70 final images from the tour.

The tour starts on Sept 21, which officially is a transfer day, just to get people into Reykjavik, but for those that are arrive early enough, we go into town for a bonus day. We start at the iconic Hallgrímskirkja Church, which can be seen at the top of the hill from many of the side streets from the Reykjavik high street. The city of Reykjavik seems to radiate out from this church (below). 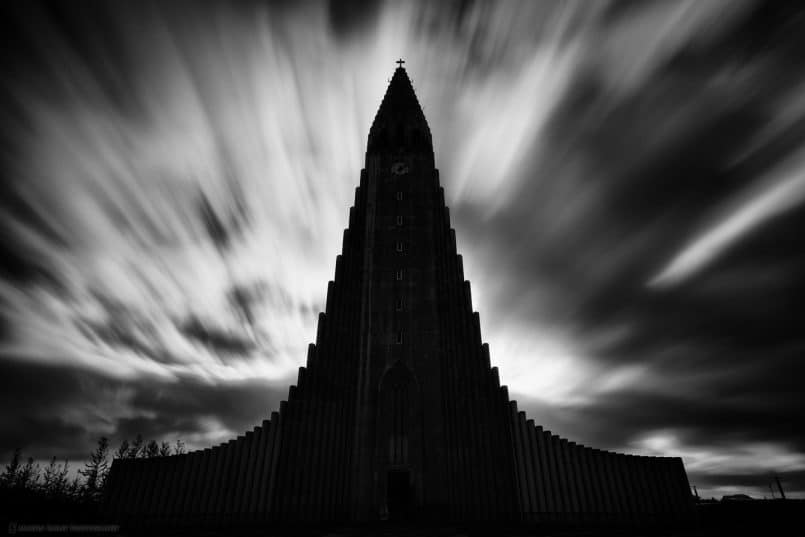 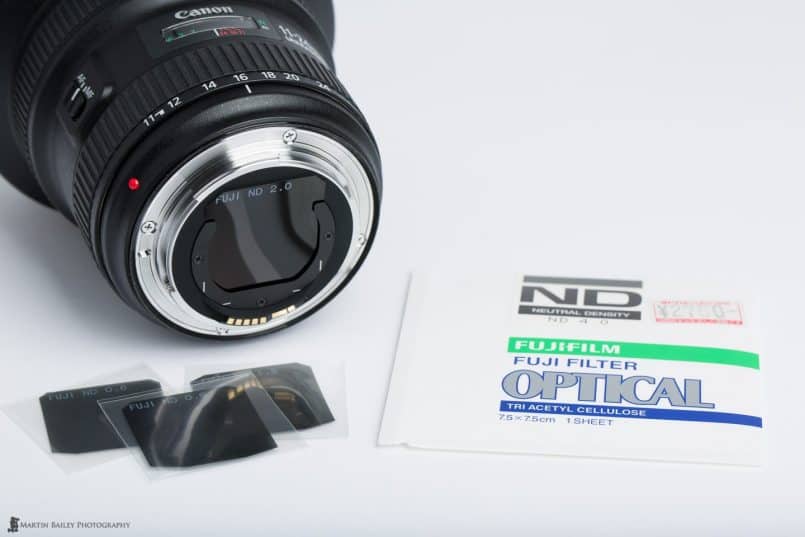 There were some great clouds on this day, with breaks where the sun shone through, so I used an 80 second shutter speed to enable the clouds to move a lot during the exposure. Because the new 11-24mm lens from Canon doesn’t accept the usual circular neutral density filters, I’m using Triacetyl Cellulose film cut into small squares that fit into the filter holder on the back of the lens.

I converted this photo to black and white in Silver Efex Pro 2, as I generally do. Note that I actually darkened the front of the church a little to enhance the somewhat sinister feel that I get from this photograph. I also cloned out a large circular mirror that someone seems to have thought would be a good idea to place in front of the church this year.

After visiting the church, we walked through the town over to the Harpa Concert Hall and Conference Centre, which is a spectacular building down on the waterfront. Here we see a view from inside the building (below) with the stairs that run up one of the walls of glass. None of the walls in the Harpa are actually perfectly straight, and all of the angles seem to run off in a kind of beautiful architectural mayhem. 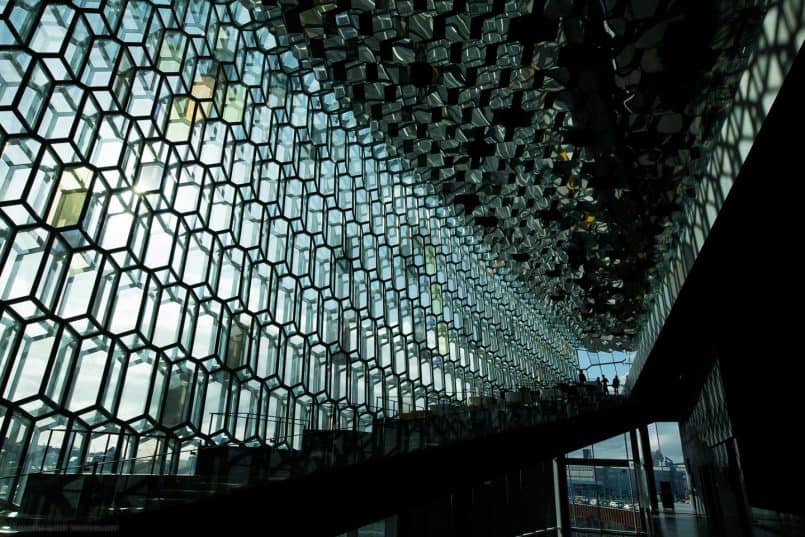 I shot this at f/11 for 1/125 of a second, at ISO 100 with a focal length of 24mm. I really like how the shadows of the window frames leave their patterns in various places around the inside of the room, and the addition of a few people at the top of the stairs helps to give us some scale and adds a little story to the photo.

From the outside it’s easier to see that some of the windows are coloured glass, seemingly positioned randomly across the building, as we see in this photo (below). At this point the heavy Icelandic sky was reflecting in the glass, adding some nice texture, and I positioned myself so that we got a clearer hint of that in the light blue window in the bottom right quadrant. 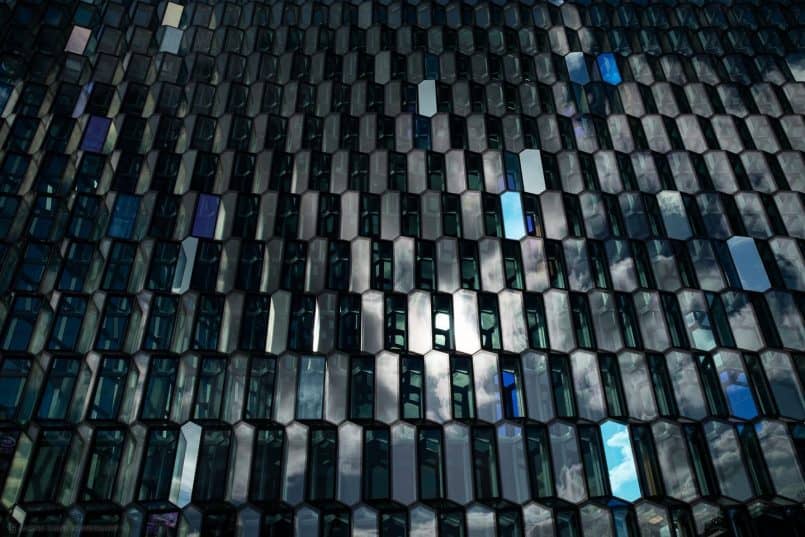 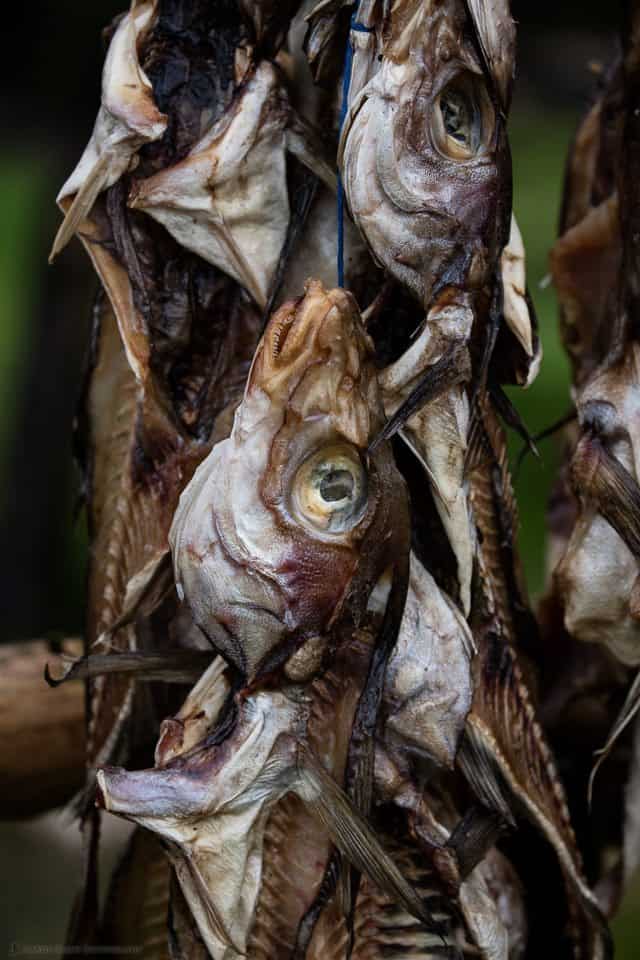 As has become customary on the tour, we started the first official tour day by swinging by the fish drying frames on the way to the Reykjanes Peninsula (right).

This location obviously stinks to high heaven, but it’s fun to just walk around and pick out photos from the thousands of fish that are simply hanging their trying to dry, which must be a thankless task as it rains so much here.

As with this photo, I tend to look for eyes that haven’t yet totally glazed over, as I feel we have more of a connection with images that include eyes that we can recognise.

Having shot with the Canon EOS 5Ds R for a few months now, I’m still finding that it’s absolutely not a problem to shoot hand-held, though I do try to stick to the rule of thumb of using your focal length as your minimum shutter speed, hence 1/160 of a second at 170mm.

After the fish, we headed further into the countryside, and having stopped at a few landscape locations, we arrived at the geothermal power plant that you can see in this next photo (below).

As it was on the cool side and raining, there was a lot of steam drifting across the scene between me and the power plant that we see here. I simply waited for one of the clear moments to make this photograph. It had been raining on and off all morning, and the wind was getting up as well, but I’m happy with how this photo turned out. 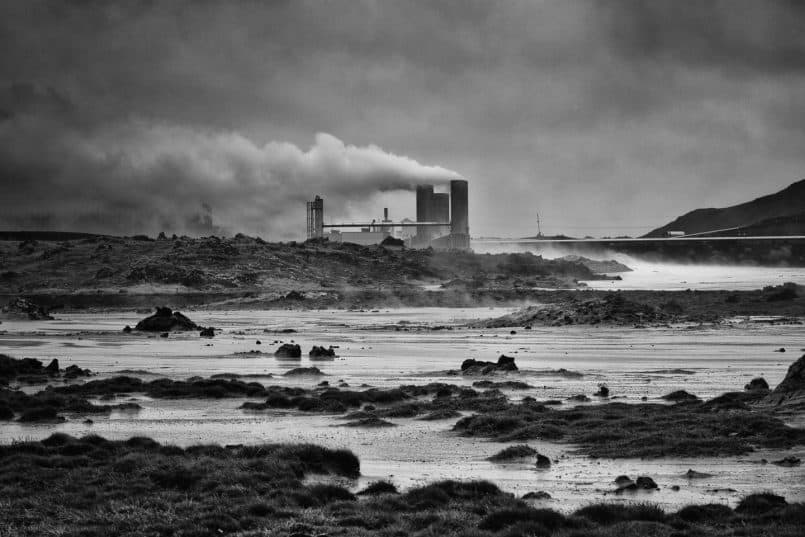 Again, I converted to black and white in Silver Efex Pro to bring out the detail in the cloudy sky and separate it from the steam coming out of the plant. I shot this at f/14 with a shutter speed of 1/125 of a second at ISO 800, 120mm. I increased the ISO to 800 to get a higher shutter speed although I was using a tripod for this, because the wind was really gusting, and this could have caused camera shake without a reasonably fast shutter speed.

The following day, on September 23, we drove out, stopping at another geothermal power plant and then on to Öxarárfoss, a beautiful waterfall that we can see in this next photo (below). Here we’d climbed up on the cliff looking down on the falls, and I used my 11-24mm lens again at 17mm to accentuate the expanse of water flowing from the falls, almost letting the falls themselves step back a little into the side lines. 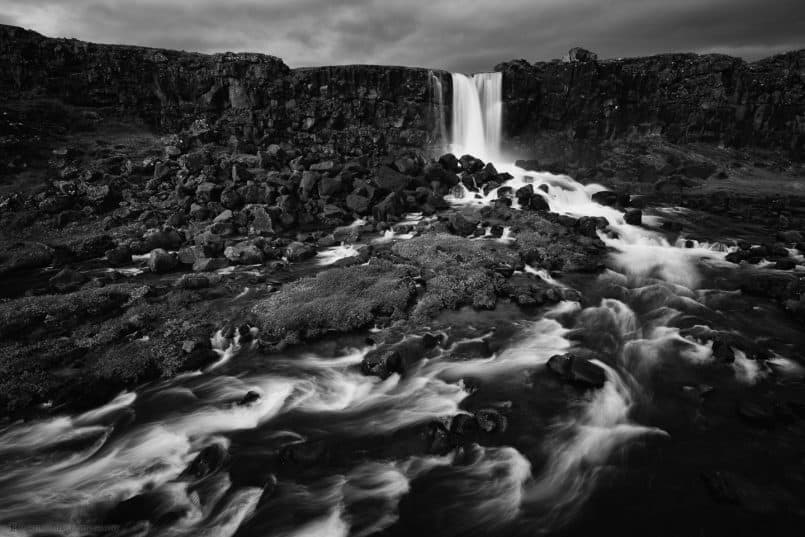 There was actually only a very slight cloud cover at this time, which isn’t great for photographing waterfalls. You really need it to be overcast for waterfalls, as this reduces the contrast in the water, making for an overall better photo. Waterfalls in full sun look terrible, but there was just about enough cloud to make this image possible. I think I was using ND film with an optical density of either 1.5 or 2.0 for this shot, for a 0.6 second exposure at f/14, ISO 100.

Close to the falls, there is a place called Silfra, which is the fissure between the North American and Eurasian continents. The plates are actually drifting apart there at a rate of 2cm per year. This photo was shot a little bit further down from the bridge where we have shot this fissure in previous years, so a slightly different view to what you might have seen from me in the past (below). 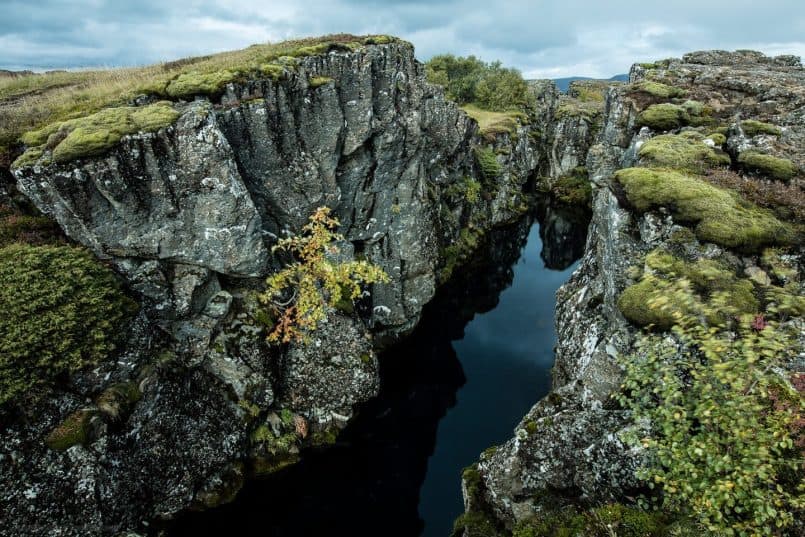 Silfra – The Fissure Between North American and Eurasian Plates

I haven’t done a lot to this image, just increased the Clarity and Vibrance a little in Lightroom. It was a 3 second exposure at f/14, ISO 100 and a focal length of 21mm. I went for a 3 second exposure here, to smooth over the surface of the water, which was rippling a little in the breeze, and I thought it would look better totally smooth like this. 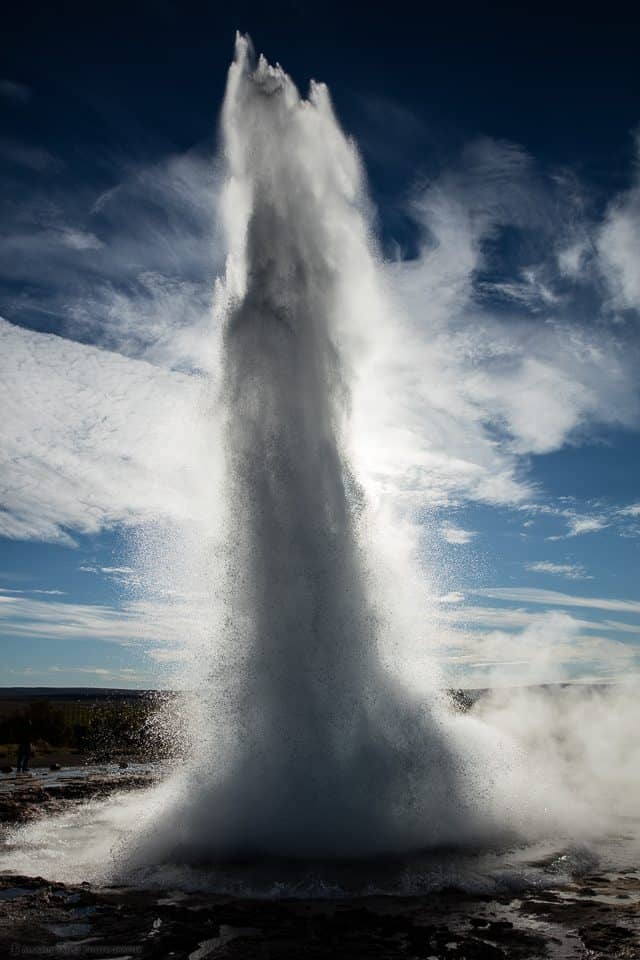 On September 24, the following day, we first visited Geysir, and the large geyser that gave us the English word for these amazing natural phenomenon, which we can see in this photo (right).

As it was a somewhat rare blue sky, I decided to use the sunlight to effect, by standing at a place that would put the eruption of water directly between me and the sun.

Eruptions can apparently be as high as 70 meters, although often a bit smaller. This eruption actually continued a little higher, but it ran out of the frame at 24mm.

I changed to my 11-24mm lens for some wider shots, but this one ended up being my favourite from the day, as it shows the power of the water, and I quite like the cloud patterns behind the water.

After this, we moved on to Gullfoss, an amazing waterfall, which some sources claim to be the largest falls in Europe. Unfortunately, the clear weather that we saw in the Geysir photo continued, and we had very harsh shadows across the middle of the falls in a photo of the entire scene.

In this photo (below) I did what I could under the circumstances and zoomed in on just a small part of the falls with a focal length of 114mm with my 100-400mm lens. Because it was so bright, a three stop ND8 circular ND filter wouldn’t give me a long enough shutter speed, so I used my ND400x filter and increased my ISO to 250, giving me a shutter speed of 1 second at f/14. 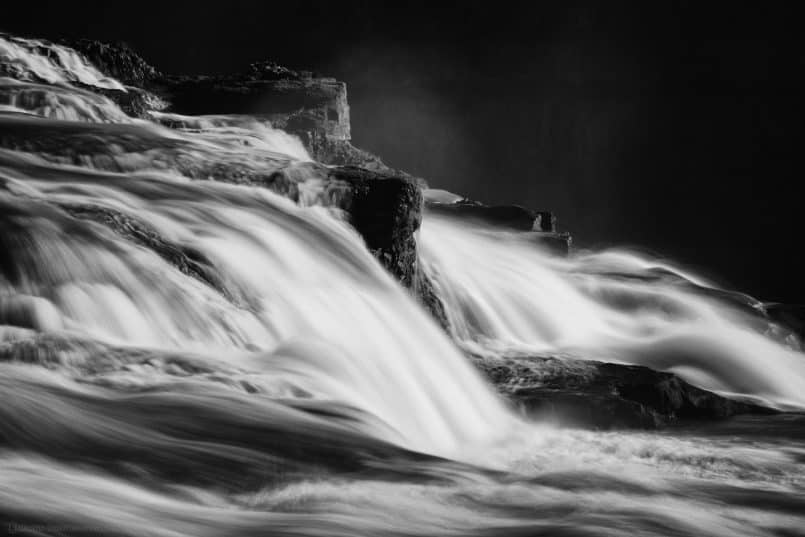 You can still see that there is some strong, harsh light hitting the falls, but this was one of the few angles and compositions that I could find to still make a half decent photo of the falls in this light. 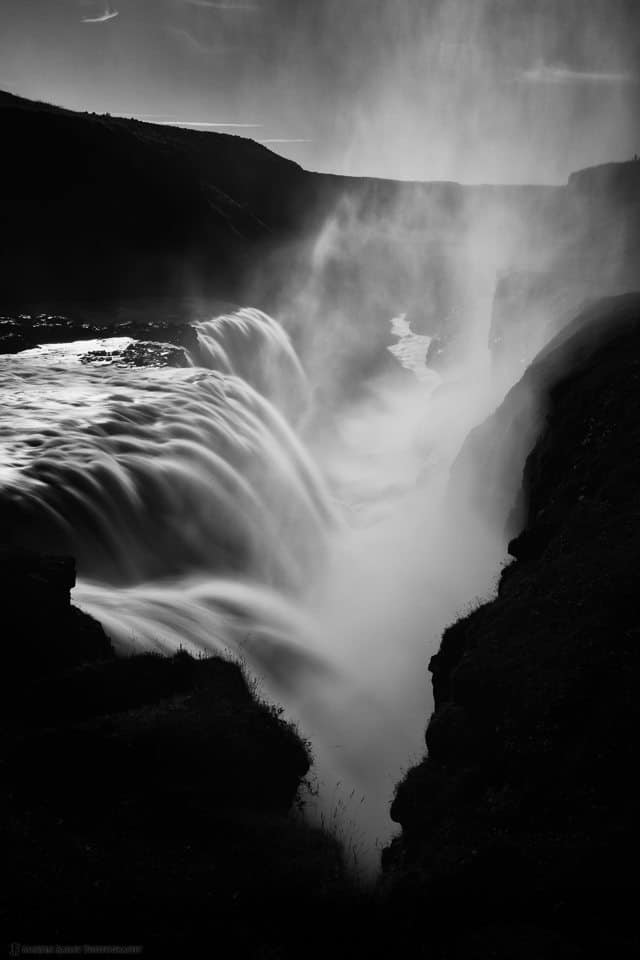 Another angle which I always shoot, and did on this day too, is this one from the end of the gorge which carries away the 140 cubic meters of water that flow from Gullfoss each second (right).

You can see from this photo, the sun was reflecting strongly on the top of the falls to the left, but the mist that rises from the water helped to filter out the light enough to still rescue the scene in the most part photographically. I actually don’t mind the silky look of that water to the left as much as I thought I would.

Again, this is a Silver Efex Pro conversion, and I’ve darkened the foreground down some more to keep our focus on the “V” of the gorge and water, leading the eye into the scene and hopefully down the gorge through the mist.

OK, so that’s our ten images for this week. We’ll pick up the trail in Part 2 on September 25, when we’ll visit the amazing Landmannalaugar, and go on to the Reynisdrangar sea-stacks at Vik.

For our Iceland 2016 tour and workshop, we are changing the tour slightly, and taking the group Full Circle, so that we can pull in some more beautiful locations like the eastern fjords, and the amazing waterfalls, Dettifoss and Godafoss. Visit the tour page at mbp.ac/iceland2016 for details and book your place, but hurry, there are only three spaces left at the time of recording this episode. 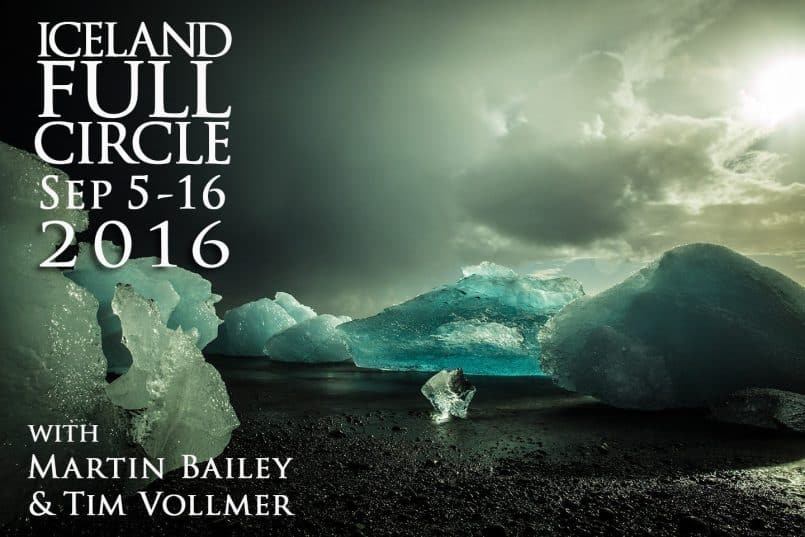