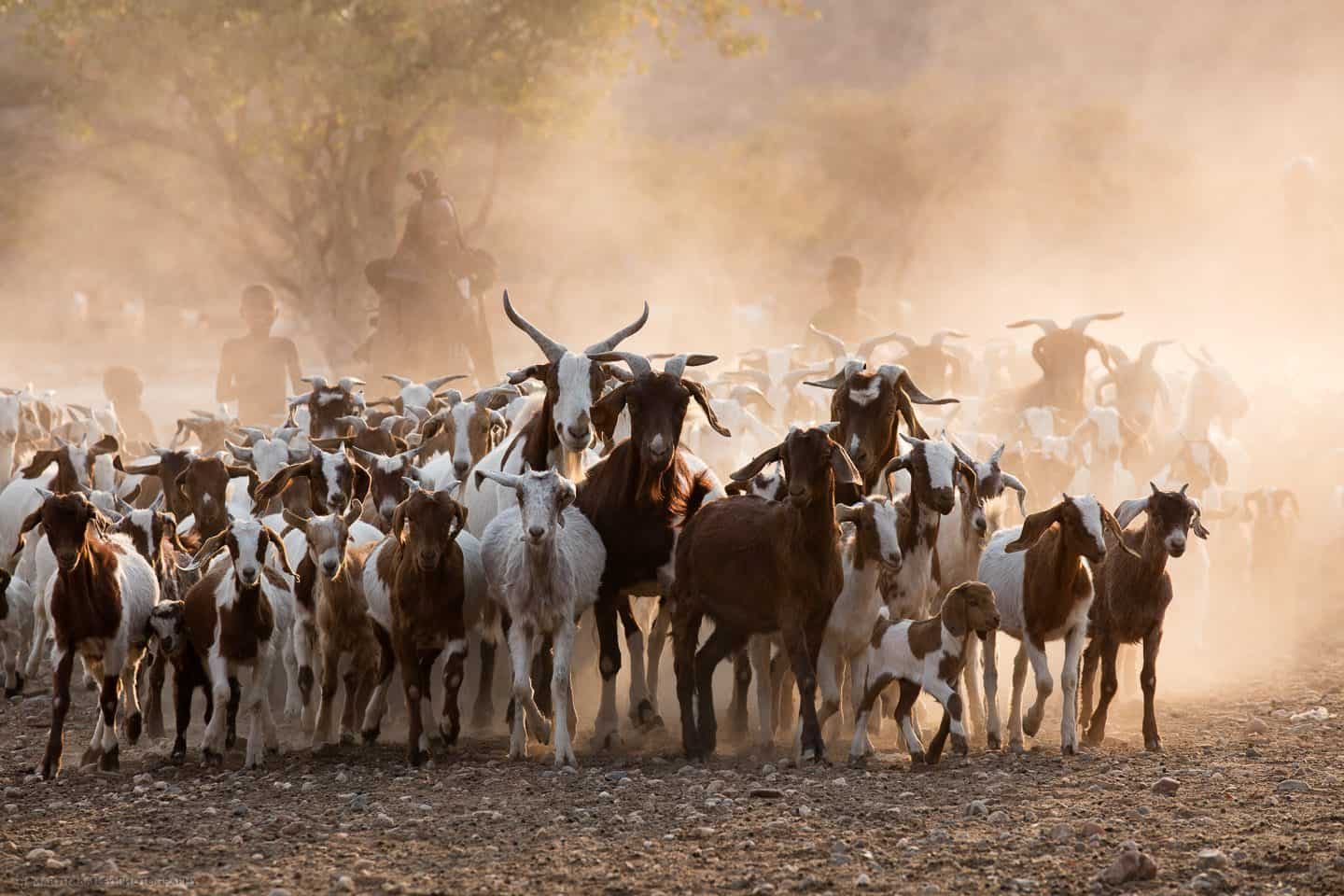 This is part four of a series of travelogue style episodes to walk you through my recent visit to Namibia, co-hosting an amazing photography tour with my friend Jeremy Woodhouse. 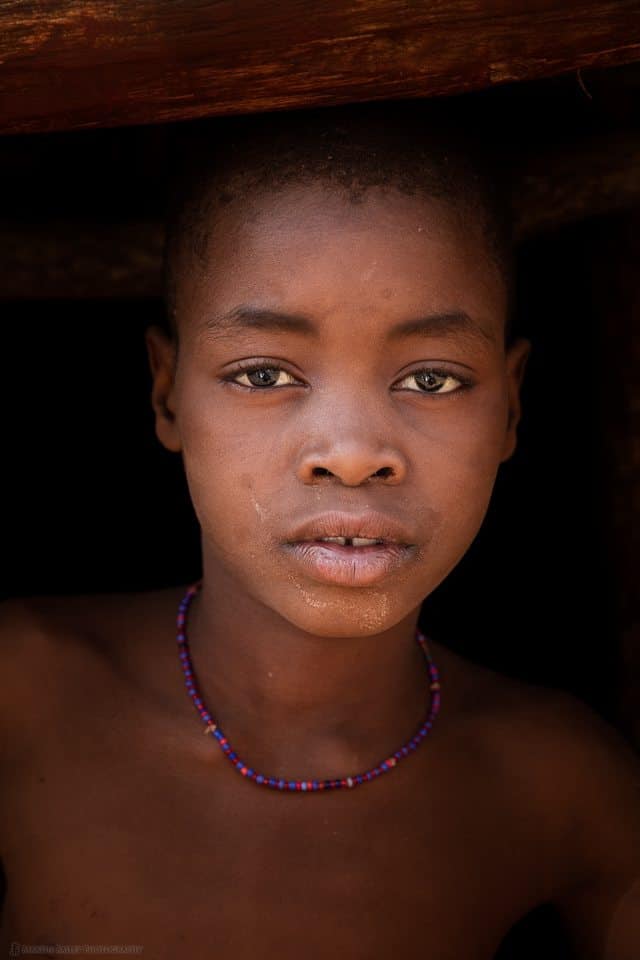 We pick up the trail on August 20, when we visit the first of two Himba villages that we visited during our tour.

The Himba are a nomadic people with a strong culture, and visiting their village is a highlight of the tour for many participants, including me of course.

This first photo that we’re going to look at is of a Himba boy, or maybe we should call him a young man, that posed for me in the doorway of one of their huts (right).

Direct sunlight is very harsh, so we generally ask the Himba to stand in shade or go inside their huts, like this. It really helps to reduce the contrast, although it does require a high ISO to get your shots, as you’ll see later.

I also used the Radial Filter in Lightroom to highlight the boys face, by reducing the Exposure of the rest of the image by 0.6. It’s not a huge change, but subtly changes the feel and atmosphere of the image.

There’s one thing with this photo that I can’t quite make my mind up about, and that is that if you zoom in on his eyes, you can see me crouching down in front of him with my camera. It produces a nice catch-light, but I would prefer it if I wasn’t there, so I might at least desaturate my shirt later. 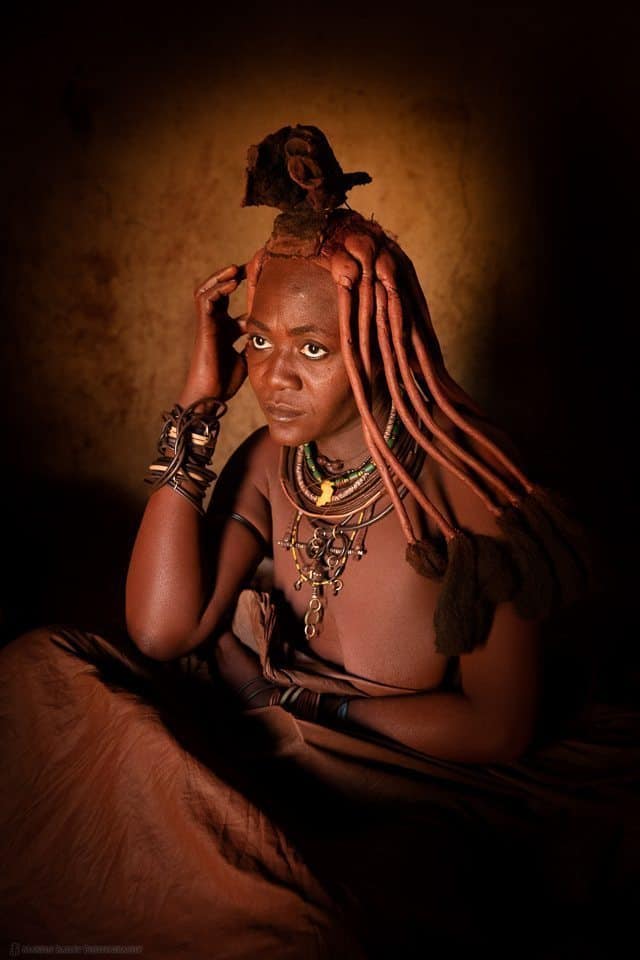 This next photo (right) is shot inside a hut, at ISO 6400, f/4, for 1/80th of a second. I know that this will have some of you cringing, thinking that it must be full of grain, but it simply isn’t, because I was exposing to the right.

I have actually reduced the Exposure by 0.55 in Lightroom to darken the lady’s skin to a natural level, but the original was brighter than this, with the highlights close to being over exposed.

This greatly reduces any grain that creeps in at high ISOs. Most people get scared of the grain and select a lower ISO, but that makes the exposure lower, recording the image data in the middle or on the left of the histogram, and that in turn ironically introduces more grain.

The moral of this story of course, is don’t be afraid to increase your ISO in situations like this, even if you reduce the Exposure later. Your photos will thank you for it.

The Himba lady here is actually taking a bath. When we asked her to go inside her hut, she quickly picked up a small pot with some dried twigs inside, and set light to them with the fire in a hearth near the center of the room, and then covered it with that ocher colored cloth which she draped over the smouldering twigs and her lower body. This is how the Himba people cleanse themselves, instead of bathing in water, which is too scarce in this areas to use for washing.

These next two photos are of the same Himba girl, with the one of the left also inside the hut. The only light in the hut is that which comes in through the doorway, so it really does light up the subjects face with a soft light, which I had the girl look into for this first shot (below, left).

I shot this as f/5.6, ISO 5000 for 1/80 of a second. I reduced the ISO for this one partly because she was closer to the doorway than the last image, but also because the white on her shells was starting to blow out, and I wanted to protect those highlights.

The photo on the right was shot at f/5.6 still, but this time she was in the doorway, so I had my ISO at 400, for a 1/100 of a second (above, right). Once again, I used the Radial Filter in Lightroom for these, to highlight the face a little, by reducing the Exposure of the rest of the image. 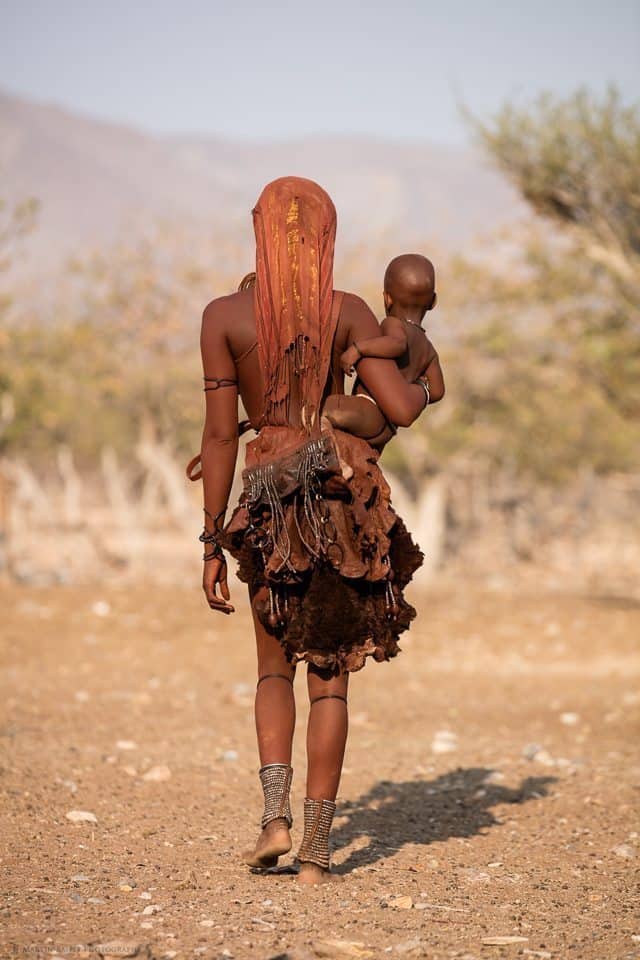 This next photo (right) is of a young Himba mother, with her child. Jeremy, the tour leader, asked her to walk out into their enclosure for about 50 paces, and then walk back again.

This is probably my favorite shot. A view from the back, which has more story to it in my opinion. We can imagine them walking away to start something, and we think about what it is that they are going to do, or maybe they are leaving us, and we consider our feelings about being left behind.

We had actually left the village before lunch, and had returned with some supplies later in the afternoon, so here, the light is much warmer at this time than it would have been during the morning, so this was a nice opportunity to get some shots outside the huts.

There’s actually a relatively sad story attached to having the 70-200mm lens in my vest pocket. Most of the Himba people don’t speak much English, and yet there is one word that the children seemed to whisper to us often, and that is “Water”.

They’re having a dry year, and often the small children would point to my pocket, and get closer to my ear and whisper “water”. They thought it was a water bottle in my pocket. I felt terrible when I had to tell them it was a lens, which they had zero interest in. We did have some water in our vehicle though, which we gave them as part of our payment for their kindness in letting us into their village and their lives.

We continued shooting after this, as the Himba people kindly allowed us to photograph them herding their goats into the corral for the night, as we can see in this photo (below). The are hills behind this scene, so the sun goes behind the hill before it gets close to the horizon. This means that the light is getting warm, but not as warm as it would be later, if the hills weren’t there. There’s nothing we can do about that of course, and I still like the resulting photos a lot. 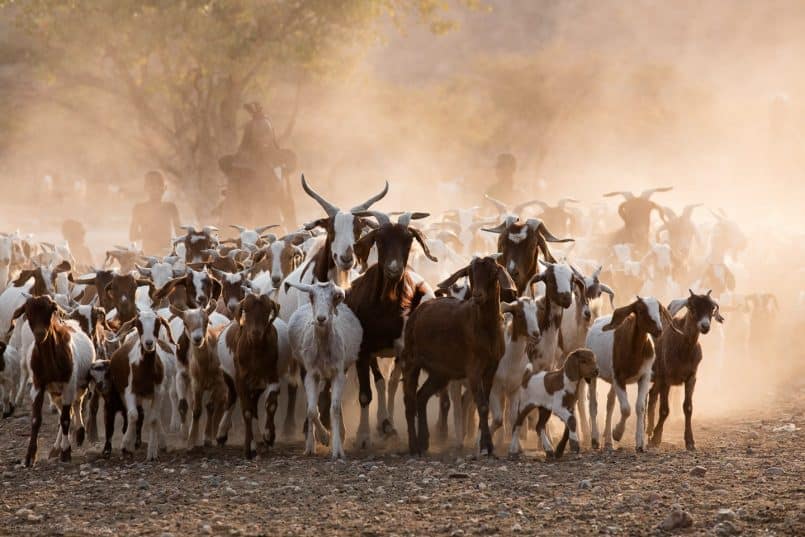 This image was shot at f/8, ISO 500 with a shutter speed of 1/320 of a second. I needed a fast-ish shutter speed to mostly freeze the action, which is what I did here.

The light did start to warm up more as it clipped the top of the hills, as we continue to shoot. The dust in the air also helped as it’s a brownish color from the dirt, as we can see here. I particularly like how we can see the sun’s rays in the dust in this photograph (below), which was shot at f/9, ISO 800 for 1/320 of a second. 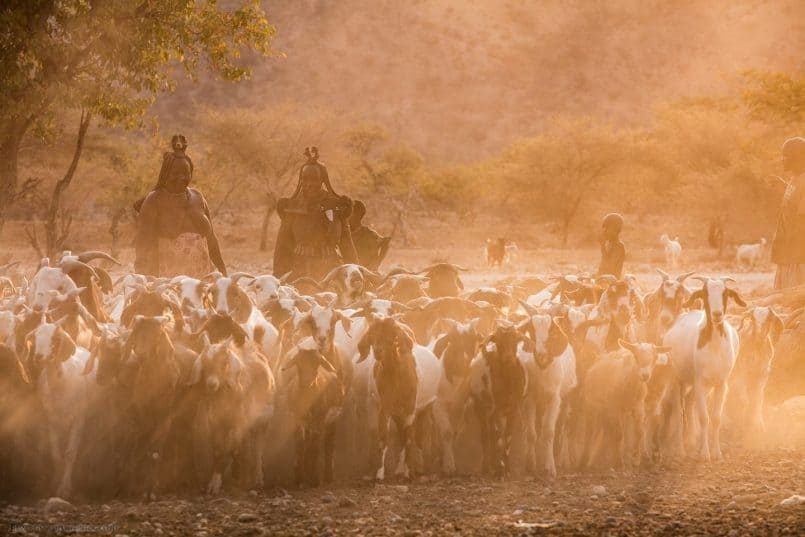 After shooting the goat herding for a while, we joked with the ladies in this photograph, and then started walking back to the main enclosure, and to our vehicles which were outside. I walked back with two of the children, which I lifted up, one in each hand, time and again as they laughed, and seemed to enjoy the experience. I absolutely loved playing with the kids, and the cultural exchange that we had here. The girl of the two children even danced for me for a while, which I caught on video with my iPhone. I have a lot of clips from the trip, and will probably embed them into a slideshow at some point, as time allows.

The following day, we started another long drive to a place called Purros, where we would start the first of four nights bush camping. Not long into our drive, we came across these men herding long horn cattle to a bore hole for them to take their daily drink (below). 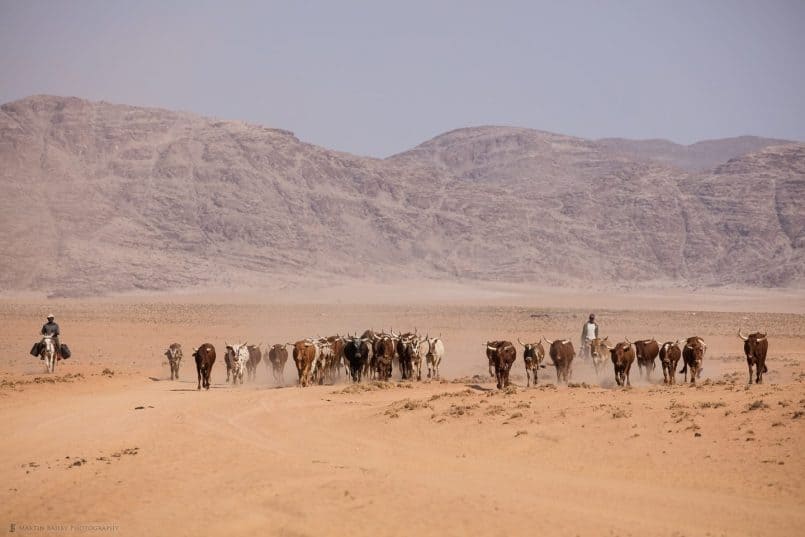 Jeremy’s car drove ahead, and asked if it was OK to photograph them, and we pulled back a way and got out of our vehicles to do just that. This first photo was shot at f/8, ISO 200 with a shutter speed of 1/800 of a second. Here I shot at 286mm, and included the man on his donkey and the entire herd.

As the cattle grew near, I pulled back a little to 158mm, and captured a smaller number of long horns (below). I also adjusted the shutter speed to 1/500 of a second, to keep the data on the histogram over on the right, then I actually reduced the Exposure in Lightroom to -0.20 in this shot. Again, this is a subtle change, but keeping the information as far to the right as possible helps to keep the image quality as high as possible, so even when there is only a small amount to be gained, I tend do this by reflex. 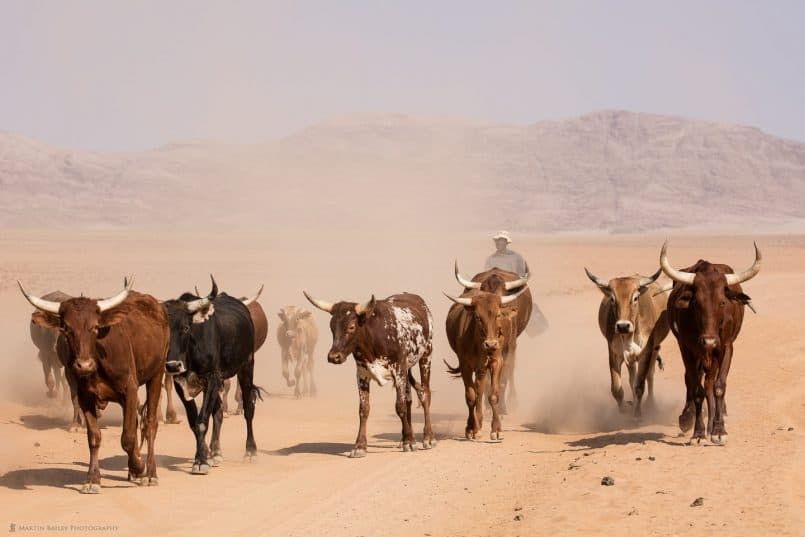 Later that day, just outside Purros, we started to see lots of desert adapted giraffes, such as this one (below). I have a lot of giraffe photos from this trip. And I mean, a LOT! But this is probably one of my favorites, mainly because of the texture created by the tree in this image. The detail is amazing, and I’m looking forward to printing this one to see how it looks on paper. 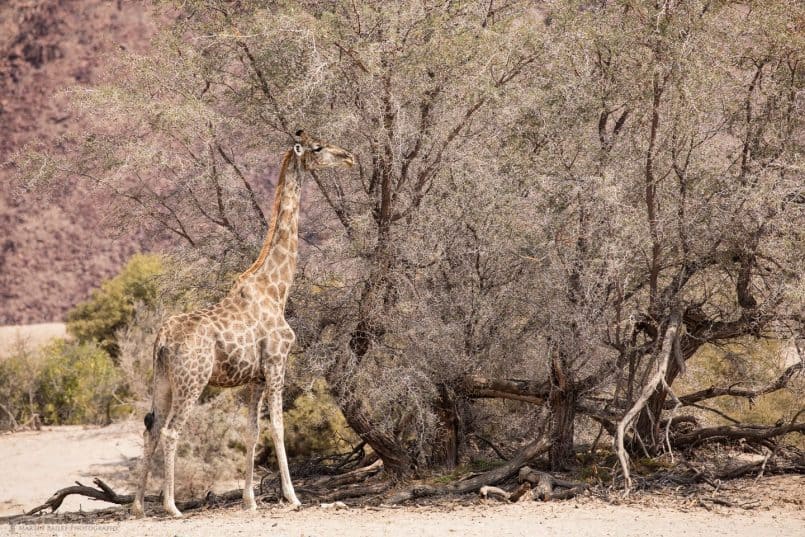 Next week we’re going to wrap up this series, with one last episode of images, starting with a visit to a second Himba village, and then we drive around the riverbed of the Hoanib River. Although the results aren’t great due to the environment, we had came across a pride of desert lions that had just brought down a young giraffe, and some amazing encounters with desert elephants, so do stay tuned.