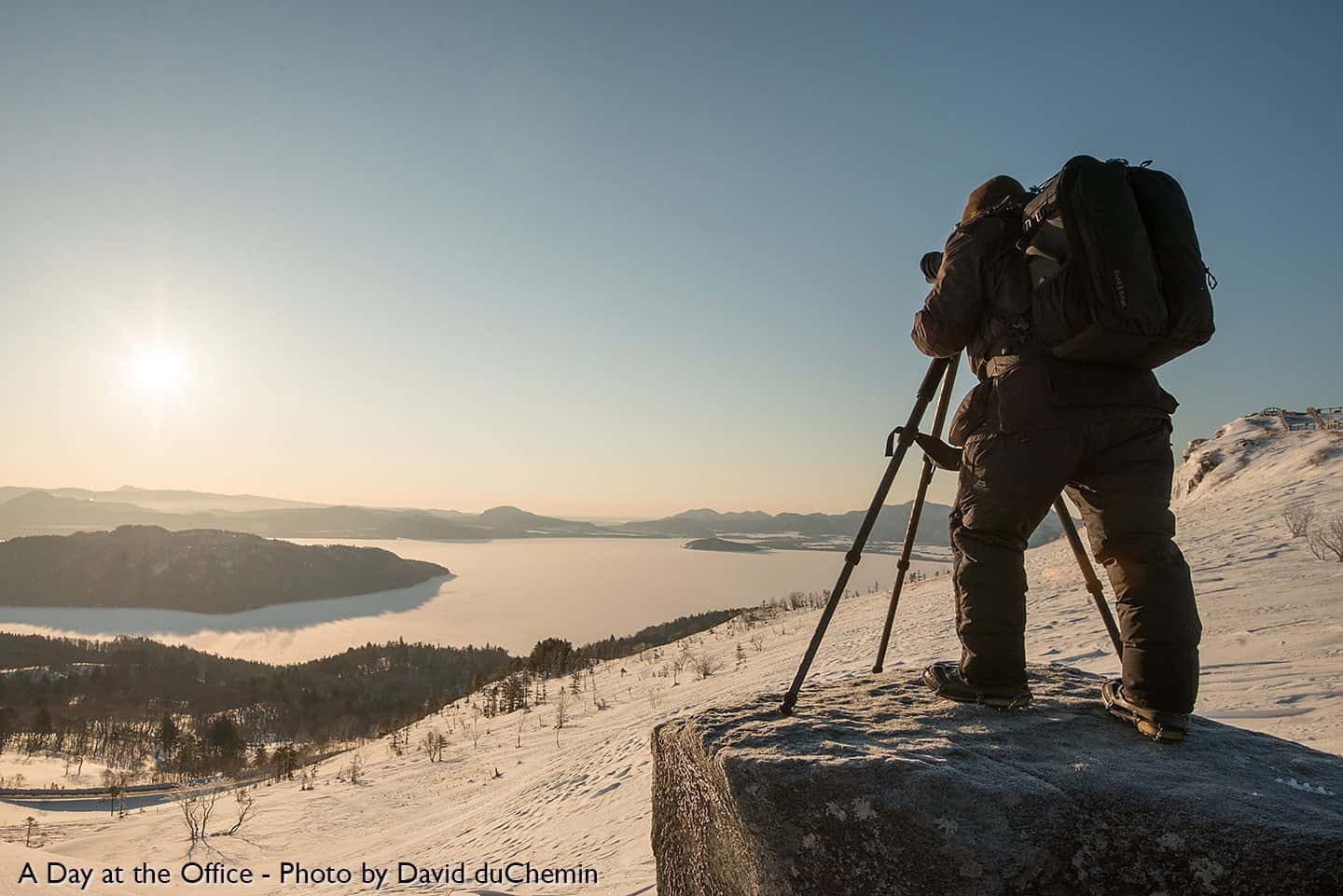 Following episode 358 when I walked you through the Gura Gear 32L Bataflae camera backpack, today I’m really happy to tell you that with the help of Gura Gear, we are giving away three great prizes, including the Bataflae backpack of your choice, and a selection of Et Cetera cases and pouches, and other accessories.

Before I go on and tell you how you can win one of the three prizes, I’m going to follow up on the review, in which I said that I’d let you know how the Bataflae handled in the field after I’d taken it on my 2013 Winter Wonderland Tours…

The 32L Bataflae is just two liters bigger than the Kiboko, which I had used since it’s release, but this 2 liters makes a nice difference in how the cameras, especially tall pro bodies, fit into the bag. The front flaps seem to close more easily too. I was also very happy with the waterproofing of the bag. It isn’t supposed to be waterproof, just drizzle-proof, and I mentioned before that I usually don’t bother to use the cover provided when it’s just drizzling, and I continued that trend at the Snow Monkeys.

NOTE: This bag is no longer produced. The closest new version is the Tamrac G Elite G32 Pro: http://www.tamrac.com/collections/gura-gear/products/g-elite-32l

It actually rained most of our second day there, and the bag got very wet on the outside, but none of the rain got inside, which was great. Of course snow, which isn’t really wet until it melts, is no problem at all. Here’s a shot of the 32L Bataflae on a snowy beach in Utoro, while we were photographing seascapes. 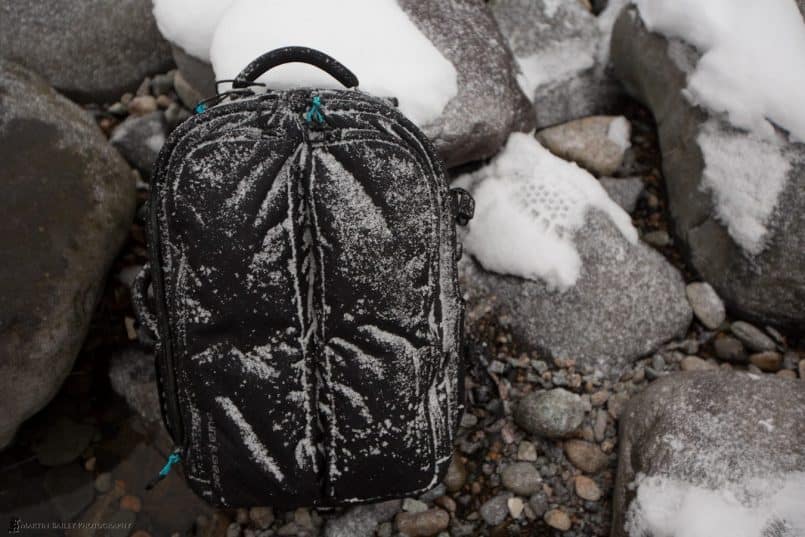 Snow is easy though, you just brush it off, and you’re fine. I do use the rain-cover in the pocket at the bottom right of the front flaps when it gets really wet, and it’s big enough to go over a good sized tripod too, but I didn’t need it in Hokkaido, where it was mostly snow.

I found the improved straps slightly better than the Kiboko too, although I never found the Kiboko uncomfortable to wear for long periods of time, but the Bataflae just feels more comfortable.

Here actually is another photo, this time of me photographing the Kussharo Lake from Bihoro pass, shot by David duChemin. I’m looking pretty chunky, even for me, with my down pants and layer after layer of clothes, but it was about minus twenty at the time, so I was pleased to be wrapped up. 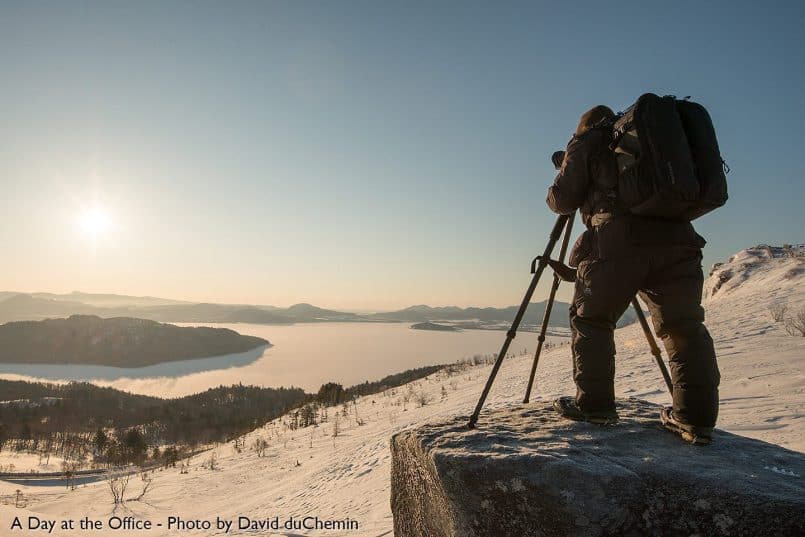 So, really, apart from the incremental improvements that I talked about in episode 358, the Bataflae performed as expected, which was of course absolutely perfectly. These bags are light, give great access to tons of gear, including the improved full open front flap as well as the butterfly style opening, that was one of the main improvement of the Bataflae range. Let’s see now what Gura Gear are going to be kind enough to give away to three lucky winners.

1st Prize – a Bataflae of Your Choice!

The first prize winner is going to get no less than a Gura Gear Bataflae camera backpack of your choice. These are available in 32L, 26L and 18L and in Black, Grey and Tan, and really are the best way to carry your camera gear, especially if you are going to be traveling on a plane, where weight and size is at a premium. Even though I originally bought my Kiboko with air travel in mind, I basically stopped using all of my other bags at that point. It’s so comfortable, and light that it seems a waist to use any other bag.

The second prize is going to be an assortment of Et Cetera Cases and Pouches, like the ones I showed in the video. I’ll link that video to the blog post by the way, for your reference. These are incredibly useful, and have really made both traveling and keeping things organized at home so much easier. There seems to be a size for everything, and it made using my GoPro’s and all their accessories really easy. I also use them now for keeping my battery charges, leads and sensor cleaning gear, as well as other tools all organized on the road. When I got home from almost a month on the road, I found it easier to just leave my stuff in these cases and pouches, as they’re already organized. The second prize winner will also get one of the cool Stainless Steel Water Bottles that we looked at in the video too.

And, the third prize is another, maybe slightly smaller assortment of Et Cetera Cases and Pouches, without the Stainless Steel Water Bottle.

Here’s what you have to do to be in with a chance of winning. Yep, we’re doing one of those Twitter Giveaways, so if you don’t have a Twitter account, you’re going to need one. Then, you have to follow the next three steps…

We will be picking the winners during the week of April 8, and will be in touch with the three lucky winners during that week. I’ll also announce the winner on Twitter once they have been picked. The selection process will be totally random of course, so everyone that is following me and GuraGear, and tweets that sentence will be in with an equal chance of walking away with some incredible Gura Gear!

Thanks also to everyone that Tweeted and took part, and to Gura Gear for making this possible!]

In case you missed it, here’s the video that I released as episode 358, in which I walk you through the 32L Bataflae camera bag backpack.

I have one major house keeping announcement before we finish. On Saturday March 24, I switched the Podcast server to Libsyn, a service that has been providing file server services to Podcasters since 2004, the year before I started this Podcast. The change was spurred by a change in the iTunes specifications, and my old server was not up to the task. The problem is that with the change, you’ll notice duplicate entries in iTunes, that will need to be deleted, or ignored. If you go ahead and delete all the dupes, they will stay away, but if you later right click the feed and select “show all available episodes” they’ll come back.

If you want to avoid that, and you don’t have many downloaded episodes that you want to protect, just delete the feed, and add it again, then re-download the episodes that you want to keep in your archive. Also, because the move has caused a lot of re-downloads, the downloads are incredibly slow at the moment. Speed is picking up, but there have been times over the last couple of days when the downloads have been just crawling, so your patience is very much appreciated.

Also note that I made a change to the Podcast feed that will hopefully protect us from having to do this again, even if I change providers again, so this should be the last time you have to delete any duplicate episodes. Finally, because we have 20GB of archives that I continue to make available to you, the migration cost me a pretty penny, so if you’ve ever felt like making a donation to help with the upkeep and maintenance of this Podcast, now would be a great time to do it. Thanks too of course to those of you that already kindly donated or make regular monthly payments. There are links to donate in the way that suits you in the right sidebar on the blog. ==>