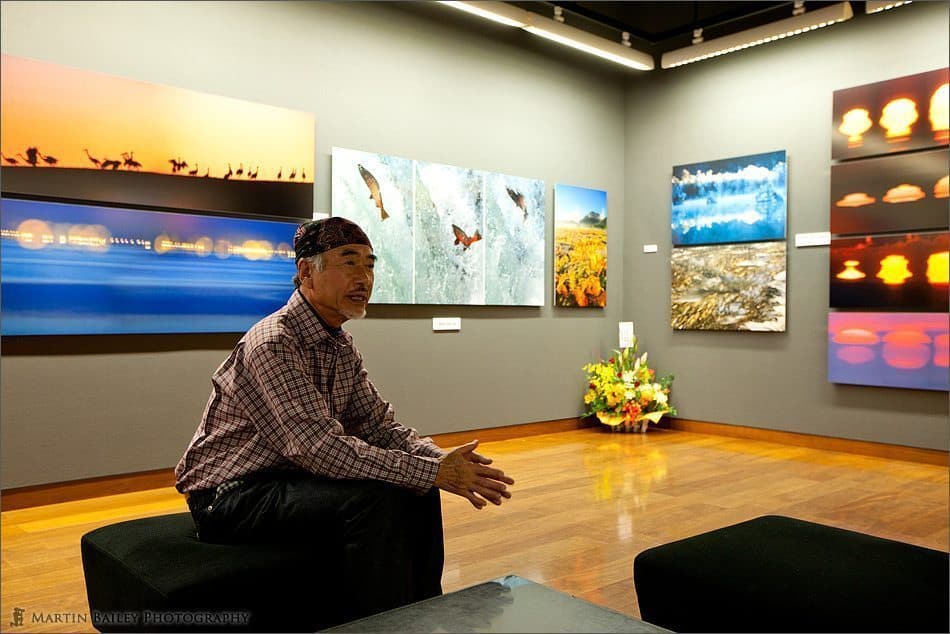 When I signed up for my first winter Photography Tour with Yoshiaki Kobayashi (小林 義明) to join him in Eastern Hokkaido in February 2004, there were two things that I was not aware of. The first is that it would change my life. I instantly fell in love with Eastern Hokkaido, especially in the winter, and have since traveled there at least once each winter, and for the last four years have been running my own popular photography tour and workshops there.

The other thing that I was not aware of, is that joining Kobayashi-Sensei, was the distinguished Hiroshi Yokoyama (横山 宏) or Yokoyama-Sensei. Although I had seen Kobayashi-Sensei’s work in many of the Japanese photography magazines, I have to admit that I had not heard of Yokoyama-Sensei, despite him being one of the top nature photographers in Japan today, and his help and advice during that first visit to Hokkaido had a huge effect on my own photography.

Yokoyama-Sensei isn’t online, and it’s hard to find any English information on him and his work, so here’s a brief bio.

Hiroshi Yokoyama (横山 宏) was born in Kanagawa Prefecture in 1939, he graduated the Tokyo College of Photography (東京綜合写真専門学校) in 1963, and after assisting at the college for two more years, went freelance in 1965. For the majority of his career he was a renowned alpine and ski photographer, which he gave up when he moved to Eastern Hokkaido some 21 years ago, to concentrate on his wonderful nature photography for which is his known today.

Since spending that wonderful week with him back in 2004, we’ve met just a few times. Twice during his exhibitions here in Tokyo, once in 2005 in Canon’s S-Tower gallery at Shinagawa, and then once again yesterday at the Canon Ginza Gallery. His work is beautiful and sensitive, and like Kobayashi-Sensei, they are both incredibly open with their knowledge of photography and the locations they shoot in. Just yesterday during our chat, Yokoyama-Sensei drew me out a map to one of the beautiful trees in his shots, which I’m hoping now to take my group to during next year’s tours, if I can get permission to do so from the local authorities. 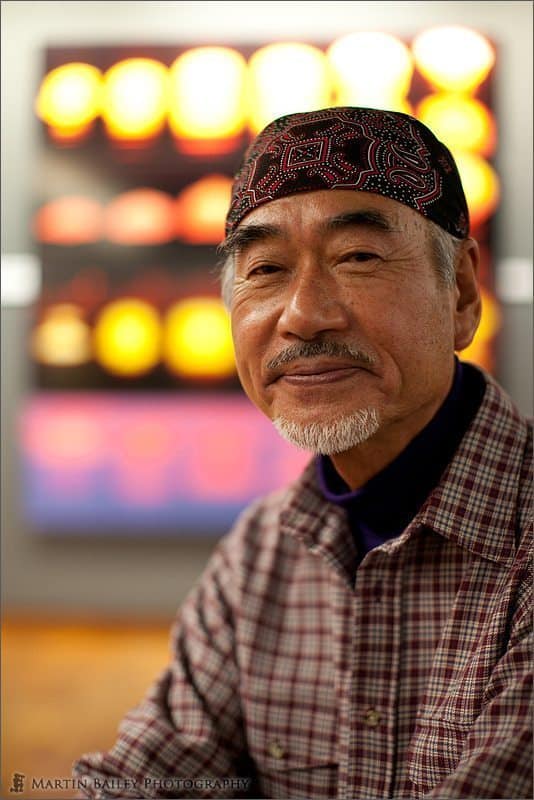 In February during my own Eastern Hokkaido Winter Wildlife Wonderland Tour we’d been out for a dawn shoot, and after breakfast, as I waited in the lobby for my group to gather, I asked if it would be OK for me to sit at a table with some Japanese gentlemen that were chatting. I didn’t look at all of their faces as I asked, but sat down with my MacBook Pro to check my email.

Then, the person that was sitting further along from me on my side of the table spoke, with a wonderful soft voice, that I recognized instantly. Yokoyama-Sensei! I exclaimed, and as we turned to each other, he also recognized me and called me by name. It had been six year’s since we’d previously met, so I was filled with pride and happiness that he’d remembered my name, and we chatted about my move to full time photographer, and he was proud to hear that I was accompanying a 14 strong group on my own tour there. I thanked him of course, because he and Kobayashi-Sensei had played such a large part in setting me on this path.

To the right is a photo of Yokoyama-Sensei from yesterday, as he tried to overcome the his nervousness at being in front of the camera, instead of behind it. 🙂

The current exhibition at Canon Ginza runs for just a few more days, until 3pm on Tuesday the 15th of November (2011). I couldn’t find an English page with the details, but here’s the Japanese page from Canon:

If you can make it to any of these exhibitions, I hope you also get a chance to meet Yokoyama-Sensei. You’ll instantly recognize him from his trademark bandana, but even with your eyes closed, you’ll know him from his calm and soothing voice.  His work is of course amazing, and well worth a visit if you get a chance.

Here are a few more photos from my visit yesterday. 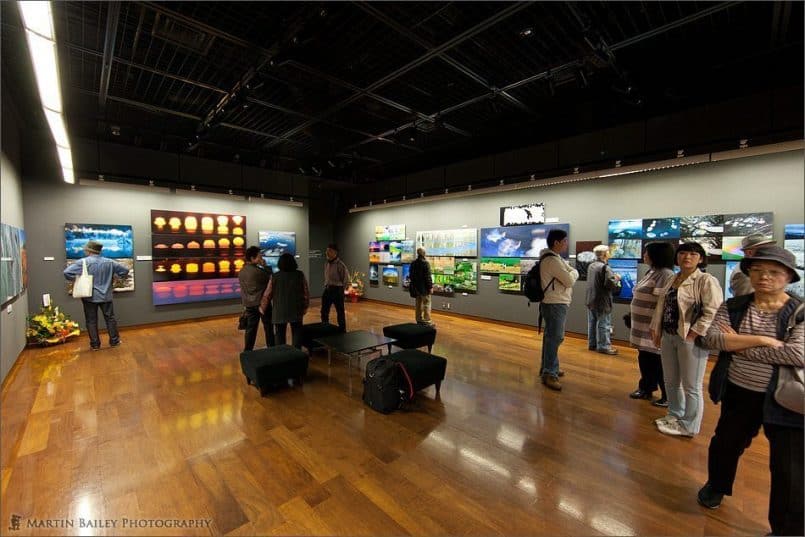 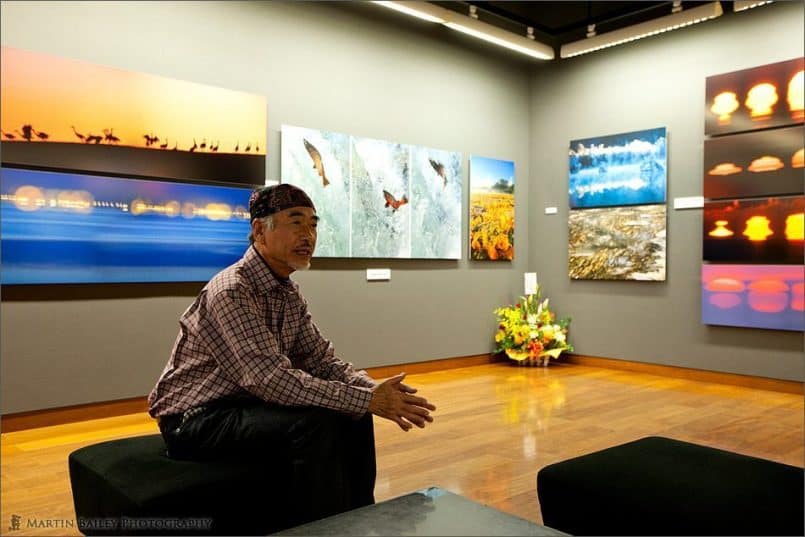 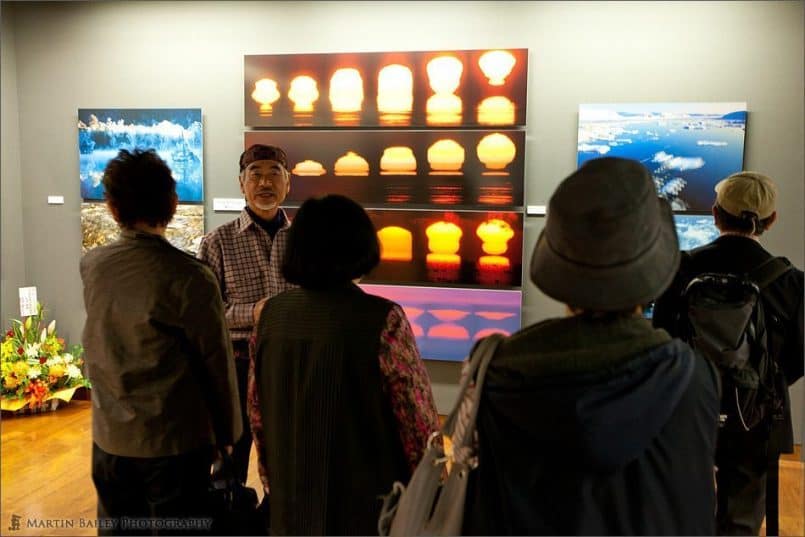