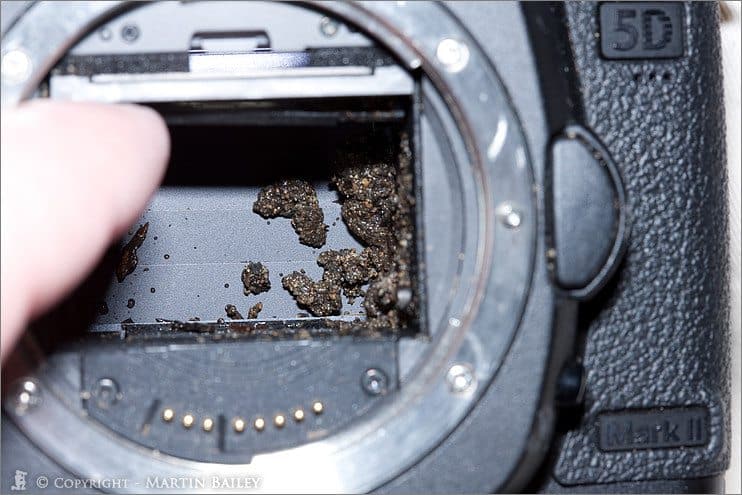 The Demise of a Canon EOS 5D Mark II

The Japanese calendar is marked with six days that rotate through from January 1st to the end of the year, and these days are pretty important to the Japanese when planning weddings, funerals and when to start doing new things etc. Sensho days for example are good luck in the morning, but not afternoon. Senbu days are bad luck in the morning, but OK in the afternoon. The day I’m writing this blog post is Taian which is the most lucky day, but yesterday was a Butsumetsu day, which is the most unlucky. (Take a look at the Rokuyo explanation near the bottom of this Wikipedia page on the Japanese Calender for more information.)

Although I note the types of days, like most Japanese people, I don’t really change what I do based on the type of day, unless I was going to be arranging a wedding or funeral or something. I have to admit though that I laughed out loud this morning when I realized that yesterday was a Butsumetsu, or most unlucky day, as I also recalled the mental image of my 5D Mark II bouncing off the concrete of a bridge, through gaps in the bottom of the hand rail, and down into the river below.

I was over at a small country town called Mitake, mainly to visit the museum gallery of a famous Japanese artist called Gyokudo Kawai. Just outside the gallery there’s a bridge, from which I had just shot 12 vertical images with my 70-200mm F2.8 lens, which I stitched together for this photograph. 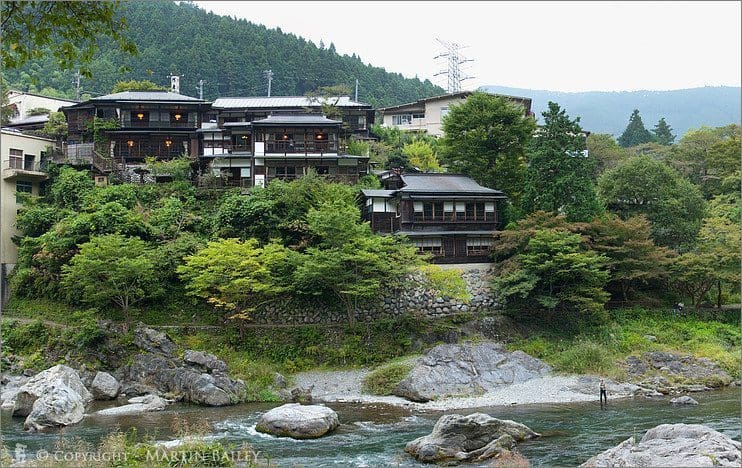 I was shooting quickly on a family day out, so didn’t use a tripod. My wife was in the gift shop though, so I had time to change out my lens, for the 24-70mm F2.8 and shoot one more image with the entire scene in one frame, rather than a hand-held stitch. I was using the Black Rapid strap, attached to the Arca Swiss style plate on the tripod ring of the 70-200, so there was no strap on the camera. As I released the 70-200 lens from the body, I had to undo the rear cap of the 24-70 at the same time as hold the body, and although I’ve done this a million times, for some reason today I fumbled. The body twisted over to the left and simply dropped from my hands.

I broke its fall a little with my foot, but the camera just rolled off, bounced on the concrete and then almost with a will of its own, it jumped through a 25cm of so gap in the side-rail of the bridge. In one of those slow motion “Nooooooooooooo!” sort of moments, I peered over the edge of the bridge and watched the 5D Mark II, without a lens attached, drop face down into the stream that ran beneath my feet towards the river that we see above, joining it at right angles.

It wasn’t a deep river, but deep enough for all but a centimeter or so of the back right side of the 5D2 to submerge. Immediately a kindly Japanese couple came over, having shouted the “Noooooooo” that I only managed to whimper in my heart as the camera dropped. I left my camera bag and 70-200mm lens with them as I went down the bank to get my camera from the stream. If this was England, or any country other than Japan, the couple would probably have made off with my gear to complete my perfect Butsumetsu day, but in Japan, they simply watched, concerned, as I retrieved my camera.

As I pulled the camera out of the stream, water flooded out. I was surprised at the amount of water that had gotten in, and realized that the majority of what was flowing out was from the battery chamber in the body, which didn’t have a battery in it, because I was using the battery grip. As I made my way back I put my head through a large thick cobweb. Fearing that I probably now had a spider in my hair I groped around, and found a rather meaty specimen perched above my right ear, which I promptly pulled away and through to the ground. Removing what I could of the cobwebs as I walked back with the soggy 5D2 in my other hand. As I got back to the couple on the bridge, we looked into the mirror chamber of the camera to see lots of grit and silt clinging to everything. The guy asked if I thought it would be OK, but I replied that I doubted it.

As I started to realize the gravity of what had just happened, my wife came back from the gift shop, and smiled, as she saw me standing talking to the couple. She thought that I was having a photography chat, as the guy also had a camera. A 5D Mark II in fact. From my expression she soon realized that something was wrong, and as she drew closer, I shook the camera, once again sending drops of water to the ground, to her horror.

We thanked the couple for their kindness, and I apologized with “Osawagase shimashita”, a common Japanese phrase meaning basically “I caused a fuss”. It’s a polite way to apologize in such cases. As the couple walked away, we put the 24-70mm F2.8 lens into a plastic bag, as I didn’t have a rear cap for it, because one lens should have been on the body, and then I put that in my camera bag. I took the Black Rapid strap off the 70-200mm lens and put both into my bag too, and then wiped the camera body as best as I could with wet tissues that my well-prepared wife happened to have with her. I flicked the on/off button on the 5D to off, and to my surprise the LCD showed the Cleaning Sensor message, but this turned out to be the last time it would. I took the batteries out, thinking that leaving them in might not be a good idea, because of shorting, and I removed the Compact Flash memory card, and put that in a card case which went into my pocket.

The 5D Mark II went into a canvas bag that my very well-prepared wife also had with her. I used the canvas bag for the body, in the hope that the cloth would wick away some of the mosture. We made our way over the suspension foot-bridge to the other side of the Tama River, and stopped on the way to watch people enjoying the water. There were people practicing rolls in canoes, and fishermen, as well as families having picnics. We heard screams of excitement and turned to see an inflatable dinghy with a group of young women navigating the rapids and screaming, and waving at the people that turned to see the origins of the excitement.

It was surreal. I was standing on the bridge smiling as I watched other people having fun, but my mind kept flitting back to the soggy 5D2 in the bag in my hand. My wife grabbed my hand and asked if I was OK, and we laughed about the whole thing, and started to make our way off the bridge, and up the steps through the buildings you can see in the above image, back towards the small Mitake train station.

After a two hour ride back to Tokyo, we called in a couple of shops at Shinjuku, and I went into Map Camera, the place that I’d bought the 5D2 at in January this year, to ask whether I should give them the camera or take it directly to the Canon Service Center to be looked at. I didn’t take out the supplemental guarantee that Map offers, so I am to take it directly to Canon when they re-open after the current holiday on Thursday, the 24th.

When I got home, after calling into a bar restaurant for something to eat and a few beers, I decided to shoot the 5D Mark II as a record of how it looks right now. As you can see below, things don’t look too great! 🙁 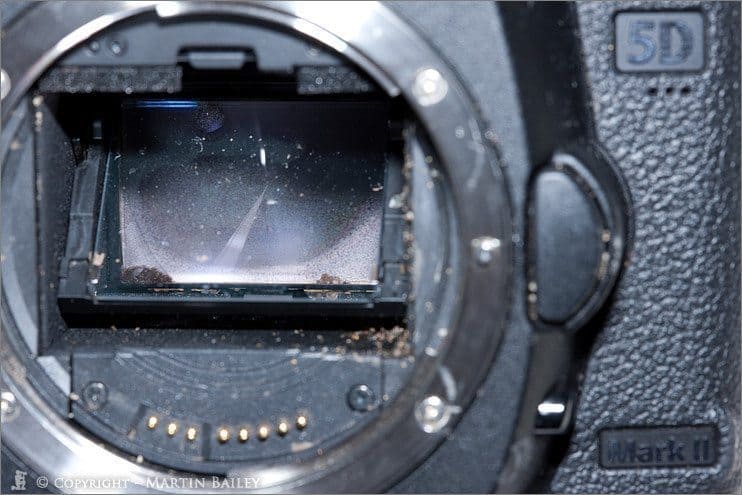 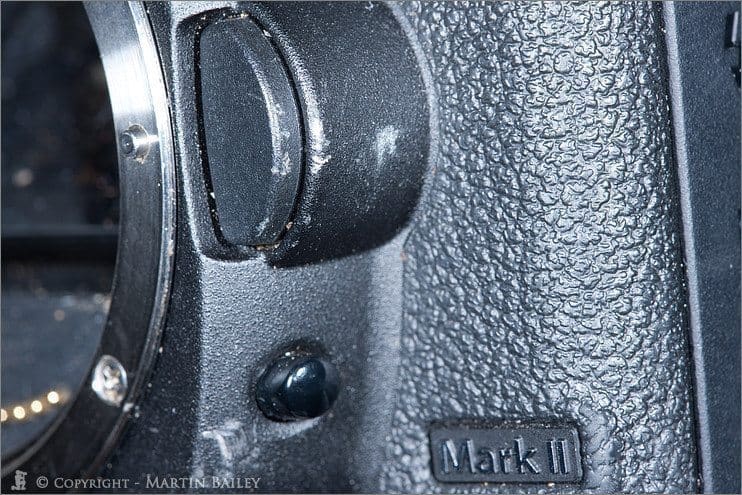 I’ve called my insurance company, and should receive a call from a rep on Thursday morning, when they return to normal office hours after the current three day “Silver Week” holidays. This is the first time I’ve had to claim on insurance, though I’ve been insuring my gear for the last four years or so. Hopefully there won’t be any problems. I’m keeping my fingers crossed, and I’ll update you later when I know more.

Thanks to everyone that sent best wishes, condolences and OMGs on Twitter and Flickr. You brought a smile to my face and made the experience a little easier, believe me. 🙂

The insurance company called this morning, and agreed very quickly to pay for either fixing the camera or to replace it. Which route we take depends now on Canon. I took the camera to them this morning and they are checking to see if it’s better to fix it, or replace it.

There is around 10-15% depreciation on the camera, but for some reason the insurance company said that can/will add 30% so I may even make a few bob on the deal. That certainly wasn’t my intention, but if they throw it at me!?

Anyway, things look to be sorting themselves out nicely. I’m now just anxious to see hear what Canon say. To be honest, if they can’t make the camera 100% I would rather just replace it.

Thanks again for all of your well wishes and support folks!