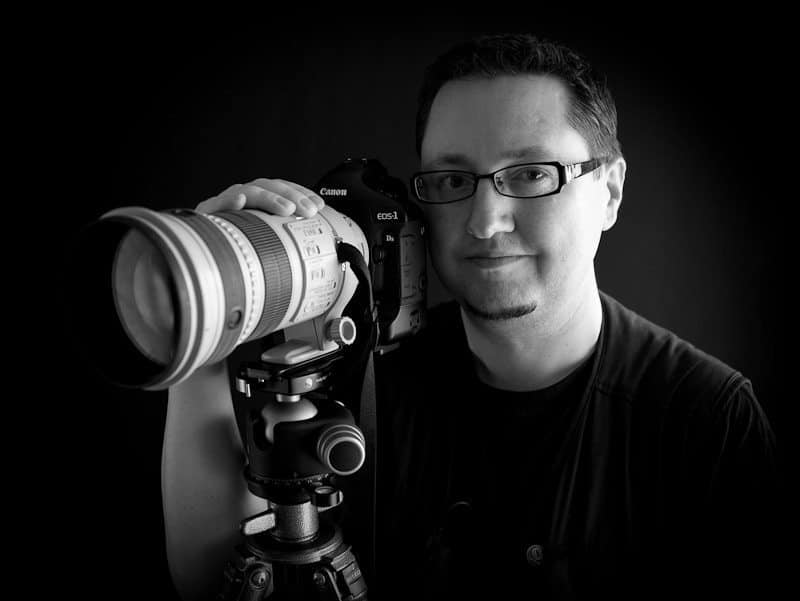 Lessons Learned from the Luxury of Self-Portrait

← Podcast 196 : Good Things Come To Those Who Wait "The Four Seasons of Namiki" Tearsheets →

I hate having my photo taken!! Or do I?

This Sunday I had to set up a black screen to do a quick video for someone, and decided that it was time to update my self portrait photograph. I know it’s a very newbie thing to include your camera, but having seen Michael Reichmann have a daguerreotype portrait taken holding his beloved camera in the Luminous Landscape Video Journal, and also then seeing my friend Landon Michaelson’s incredibly cool self portait, I figured I wanted to include my camera.

I got out my Canon EOS 1Ds Mark III camera and my Canon EF 300mm F2.8 L lens, and stuck them on the top of my Gitzo Tripod with the Really Right Stuff BH-55 ball-head. Why not? I asked myself. I love my gear like the children I never had, so I don’t really care if some people think I’m a newbie for including these things. Also, I know for sure that Michael Reichmann and Landon Michaelson are not newbies, so I set about the task.

Before I go on to make my point, let’s talk just a little about the process and the resulting photo (below). It was a rainy afternoon, with ambient light coming in through lace curtains to my left (the right of the frame as you look at the image) and I had a 5 foot gold and silver reflector standing on the opposite side to my right to bounce some light back into the otherwise very deep shadows.

I shot with the 5D Mark II Picture Style set to black and white, to help me see how the final image would turn out, as I intended from the start to conver to B&W. Of course, because I process my RAW files in Adobe Lightroom, it doesn’t understand this and automatically renders a color version from the RAW file. Using the Picture Style in camera is really just a way for me to check the tonal qualities etc. in LiveView as I set up the shot, and as I played back my shots trying to get it right.

I focused on the EOS-1 on the front of the camera, and then was conscious of making sure my eye was parallel to that when I tripped the shutter with my cable release set to a 5 second timer. I shot probably thirty or fourty shots, trying to get one I liked. This was partly because I had used a wide aperture, and so there was very little deptho-of-field, and getting my eye totally sharp was a little bit hit-and-miss. Also though, this was because I couldn’t quite decide how to pose for the image, or how much I should, or should not smile. For a self-portrait I find this really hard.

From the photograph above, you’d be forgiven for thinking that I’m a vane narcissist. Quite the opposite is actually true. I am pretty self-conscious and really don’t like having my photograph taken. Since I was a kid, whenever anyone pointed a camera at me, I would pull a face. It was either a big cheesy grin or a purposeful grimace. I might go cross-eyed or try to do my best Marlon Brando. Anything to not show the real me to the camera.

After coming up with this portrait though, I started to think about what had happened. I was pretty happy with my prevoius self-portrait, but I hadn’t figured this out then. What it’s all about is not really being uncomfortable with having the real me photographed. It’s so much more about being seen with my guard down by the person behind the camera or by other bystanders. I fear, as I’m sure many others do, that people might think I’m being vain or maybe overly self-confident to actually allow myself to pose for the photograph.

Now, I’ve done some environmental portraiture, and some portrait work for clients, as well as friends and family. I make a point of ensuring that my subjects are comfortable, and I go to lengths to help them to relax, and give me a slice of who they really are. I’ll also use the old tricks like waiting until they think I’m done, and then shoot a few more frames to get them looking totally relaxed. We all know that these can be some of the best shots.

I started to think as well, that I’ve never had my portrait made by a real photographer. The closest I came was when I was a boy, when my friend’s Dad used to shoot us every so often. He had a passion for photography, which was a good job, as we rarely had a camera in my own house. Without my friends Dad, the only images I’d have of my self as a kid would be one when I was about two years old, that had been used as a coaster at some point and still had the rings to show it, and the odd group photo from family get togethers. Most of my early interest in photography came from my friends Dad. Thanks Jim!!

I started wondering if I could be as relaxed as I was for this self-portrait, had I sat with another photographer. I figure that if they were good at what they did, then I’d hope they’d be able to get me to relax enough to drop my guard. I can assure you though, that say if my wife was looking on, I’d be fooling around and probably end up spending $500 for a picture of a cross-eyed Marlon Brando with a Wallace and Gromit smile.

At the moment, I concentrate on nature and wildlife work more than anything because I have to prioritise very small slices of free time carefully. As I do more and more professional photography work though, I plan to do more portraiture as a source of income, and I must say that I do really enjoy it. I wouldn’t be including this in my plans if I didn’t. So this was a good excercise for me, and taught me that being relaxed, and not feeling self-conscious is the biggest step towards capturing a portrait image that the subject, me in this case, really likes.

Get this post's short-link:
← Podcast 196 : Good Things Come To Those Who Wait "The Four Seasons of Namiki" Tearsheets →
Become a Patron

← Podcast 196 : Good Things Come To Those Who Wait "The Four Seasons of Namiki" Tearsheets →