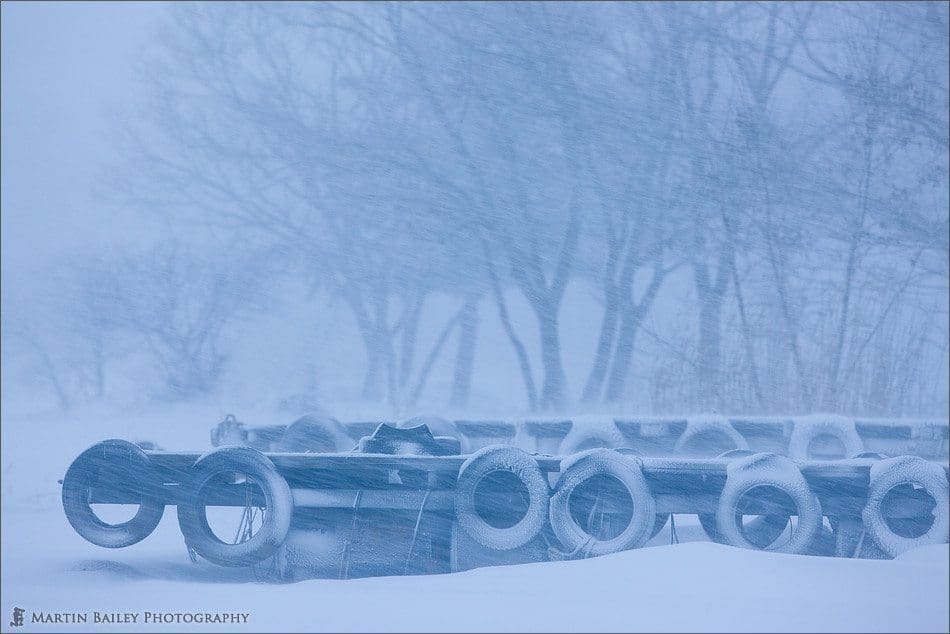 So, as you just heard, I was over at the Inawashiro Lake on the last day of 2008, hoping to capture one or two more good images before I said goodbye to the year. I believe I did that, as we saw two of the shots for this day in my best 10 shots of 2008, in episode 170, a few weeks ago. Today, we start a two part series in which I’m going to talk a little more about the trip, as we look at a few more shots from the day, and I’ll mix in a few tips on how I got some of the shots as usual.

We were played in there by me standing on the shore of Lake Inawashiro in the Fukushima prefecture in northern Japan. The wind was high, and the snow was driving at me at almost horizontally. It was impossible to stand looking into the snow and record, so as I said, I turned my back to the wind and snow for most of the time there. It was just after 6:30AM when I started recording that intro, and it was still pretty dark, but getting gradually lighter as I spoke. I was into Civil Twilight though, as I confirmed by using VelaClock, a tool that I use on my iPhone to find out when the various twilights start, and what time the sun will rise. I’ll be talking more about VelaClock in another episode in the near future, so I won’t go into much detail today, but I did want to quickly mention that from the last update, VelaClock now has the ability to select different days in the past or future, which was the last thing I was waiting for, after information on the azimuth at which the sun and moon will rise and set, so now, in my opinion, this is a must have iPhone application for any photographer working in the great outdoors. It also now has the ability to detect your location with the iPhone’s GPS, and give information on that location, or you can input GPS coordinates into the home location for use when planning a trip. I’ll put a link to the VelaClock site in the show-notes, but just search for VelaClock in iTunes App Store and you’ll find it there.

Anyway, the sun was going to rise at about 7AM, but the heavy snow clouds were cutting out a lot of the light. There was no point in just standing there though, waiting for the swans to fly, because like I said, they tend to swim more when it’s gusting as it was, and probably wouldn’t fly in this weather until it got a little warmer after dawn. So, basically, I started to see what could be picked out of the landscape with my 300mm F2.8 and we can see an example of what I captured in image number 2039. You can tell how low the light still was, because I shot with an aperture of F5.6, and I still had to select a shutter speed of 1/30th of a second, with ISO 800. In this wind, I was relying heavily on my tripod, and the Image Stabilization, because it really was gusting. Most of the shots were sharp though, as I shot mostly in the moments when the wind died down slightly, and the tripod served me well. Now, I have of course included a man-made object with this jetty that will be used in the summer months to board people onto their swan shaped paddling boat, but right now, it was only serving to add a point of reference in my photo showing how the snow was driving almost horizontally across the scene, and how really cold this place was. It wasn’t really bitterly cold, and nowhere near as cold as it gets in Hokkaido on the dawn shoots, but with the temperature being pretty much at around freezing point without the wind, when you calculate in the wind chill, it must have been around minus 10 or 15 degrees. I don’t know how fast the wind was blowing, so I can’t calculate this accurately. 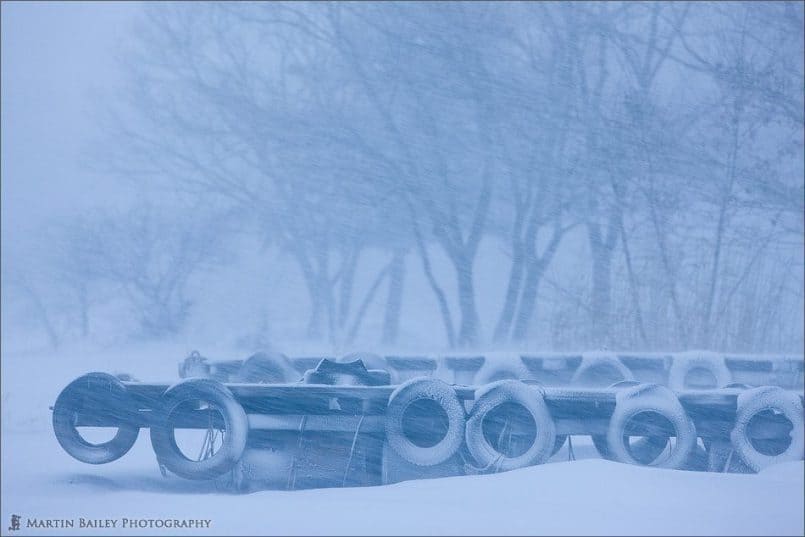 I think I’ve mentioned before, but the main problem with shooting in conditions like this, apart from the obvious things like cold hands and actually seeing, is the fact that the snow hits the front element of your lens as soon as you point the lens directly at it. At this angle, I was still probably around a 45 degree angle away from the snow, and so could play with the scene a little. In the next image, number 2045, I was still working this same patch, just looking for areas of the scene to crop out with my 300mm lens. This was shot at 7:22, almost half an hour after the last shot. The sun was now above the horizon, though of course not lighting this scene, and probably in fact still behind the mounts behind me. The sky was of course though much brighter now, and so I had reduced my ISO to 200, and was shooting with a shutter speed of 1/50th of a second at F5 for this, so much more available light now, although still pretty bleak. This is one of my favourites from this series of shots where I just cropped out portions of the scene. I have uploaded a few more, and I will include a link in the show-notes to list all 30 shots that I uploaded from this day and the previous evening, in case you are interested in taking a look. I like the look of the dark trees with the driving snow and then the slightly soft background, caused by both the shallow depth of field, and the fact that there’s more snow back there. One thing to note here is that to bring out these blacks from the snow storm, I had to increase the black slider in Lightroom to about 20, from the default of 5, and increased the contrast and clarity some too, to bring out the definitions of the shapes a little more. 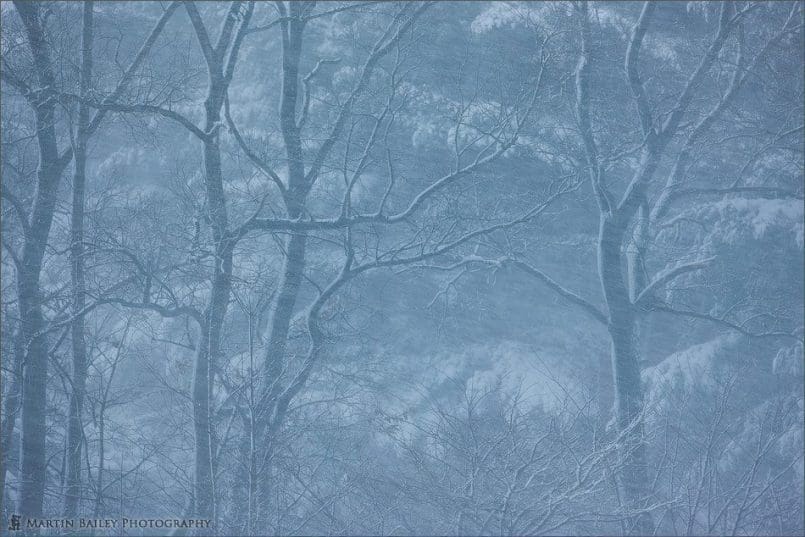 Getting back to the snow on the front element though, as the light levels rose, I really wanted to start shooting the area of the scene in which the swans roost, and so I was going to have to start and point my lens straight into the snow. I find that the only way to shoot in these conditions is to shoot quickly, then wipe the lens. If you only have a bit of water on the lens, you can usually blow it off with a blower, but in conditions like this, the front element gets covered pretty quickly, so there’s no option other than wiping it with a lens cloth. I keep one handy at all times when shooting, and simply had to shoot in bursts, then turn the camera towards me and give the front element a wipe, then shoot again for a few frames.

The other problem of course is that you can’t change the lens very easily, without risking getting snow, and therefore of course water, inside the camera, which is not good. It would probably be worth taking the risk if you really have to, but you would have to be very careful, and when you consider that I needed a long lens on the camera in case the swans did start to fly through the snow, I really didn’t think it was worth taking the risk. So, to capture images like number 2047, I basically turned the camera up into portrait mode, and shot a series of images, moving across the scene at about half a frame at a time, and then stitched them together in Photoshop. This was actually sixteen vertical images stitched together, with lots of overlap in each of course. The resulting image is 16,248 pixels long and 3,658 pixels high. It’s difficult to appreciate this in the Web version of course, but it’s one cool image to view in Photoshop CS4. The reason being that CS4 now uses the computers GPU or graphics processing unit to render images on the screen, and you can now grab the image and as you move it across the screen, the image scrolls fully intact, not like before, where it moved the image with a frame, then re-rendered the image after you let go of it. This means that you can basically zoom in to fill the screen horizontally, then just flick across it, viewing all of the detail in the image. There are a lot of swans in there, just waiting to be seen. I haven’t actually printed this out yet, but I’m hoping that before too long I’ll be able to print this out on roll paper, and do a really big long panoramic print of this, to see what it really looks like in its entirety. The stitching was painless by the way. CS4 seems to have made even more improvements to an already good stitching utility.

This image was shot at 7:30AM, shortly before I finished the dawn shoot and went back inside for breakfast. I recorded another few minutes of audio before going back though, so let’s listen to that before we finish for today, ready to pick up the shoot after breakfast in the next episode. I kind of feel as though it would be nice to end with this clip, so let’s skip the housekeeping section for this week. Don’t tune out just yet, but I’ll just say thanks for listening, and you have a great week, whatever you’re doing. Bye bye.

Here’s a link to the VelaClock Application for the iPhone. This is a must have application for any photographer working in the great outdoors. http://www.veladg.com/velaclockapp.html