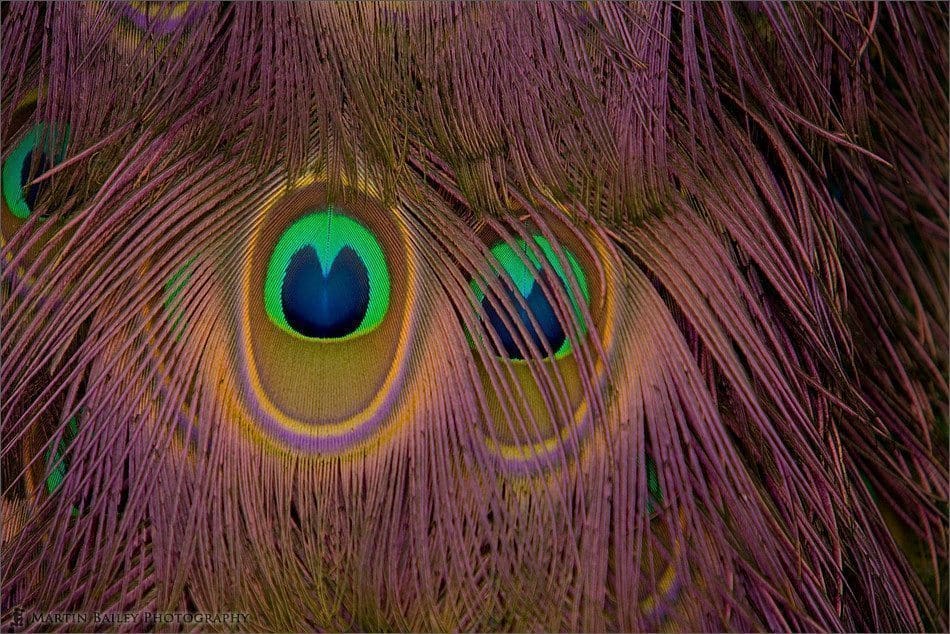 After a few weeks’ hiatus it’s good to be back in front of the mic. We’ve had my brother and sister-in-law staying with us for the last two weeks, and really just been so busy having fund that I found it difficult to even find time to catch up in the forums for a number of days at a time. Well, we packed them off on a plane yesterday morning, and after catching up in the forums, in today’s Podcast I’m going to announce the winners of the Nostalgia Assignment, and kickoff the next assignment with the theme “Abstract”.

So, as usual, let’s start by taking a look at the 3 winners of the Nostalgia Assignment, starting with third place. Well, Forrest Tanaka, username hqsbud has done it again with a simply beautiful photo called “Finding Father”. If you usually jump to the images using the number I call out, then add an m for member before the number. This is image m8669. Here we see someone with glasses on looking at a black and white photograph that they are holding of a handsome young man. As we know that Forrest’s family are originally from Japan and the title being Finding Father, I’m wonder if this is maybe Forrest looking at a photograph of his own Father. Either way, this is a wonderful photograph, of the quality that we are now used to seeing so consistently from Forrest. I think the way the frame of the viewer’s glasses overlap slightly with the edge of the photograph adds so much, as it connects them to the photograph, accentuating the fact the they’re looking at it, and not just leaving it to us, as the secondary viewer, to imagine the line of sight between the viewer in the photograph and the photograph itself. The tonal quality of the image is just perfect, and focus on the photograph itself is spot on, making it very clear, without which the photo within the photo would simply not work. Perfect! So, congratulations again to Forrest for third place. 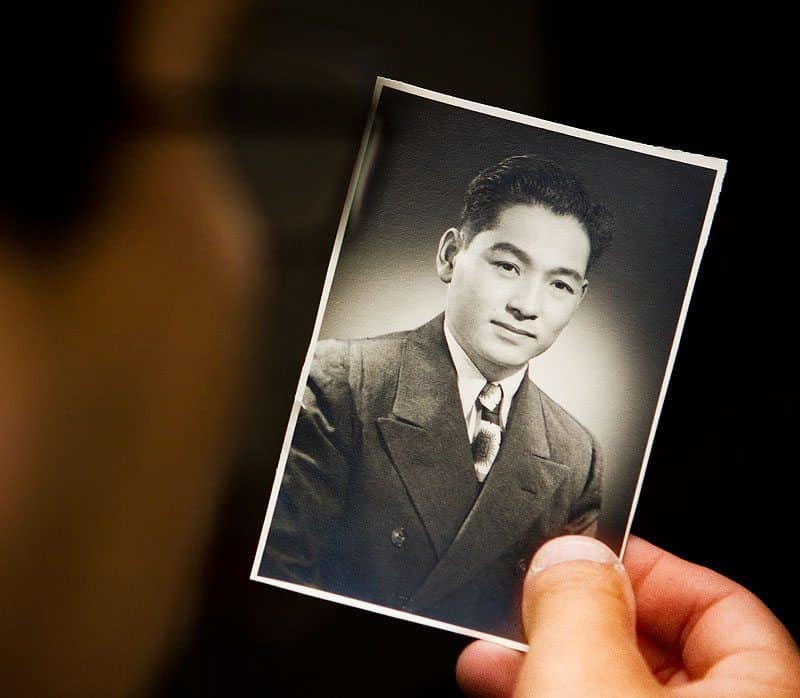 In second place, is Edward Lim, username autumnleaf, with a great shot of an old classic car, which is image m8544. We see from the image comments that Edward saw the car while driving home and asked if it was OK to take some photographs. This is exactly the sort of thing that I hope for with these assignments, getting you, and me, doing something that you would possibly not normally do. The image has been converted to a nice subdued sepia tone. The sun bursting through the clouds in the background and the reflections in the paintwork of the car add a lot, and I really like the crooked skyline. It would have been tempting to keep the horizon straight, and I don’t know if not doing so was intentional or not, but it works well. Excellent image Edward! Well done on second place. 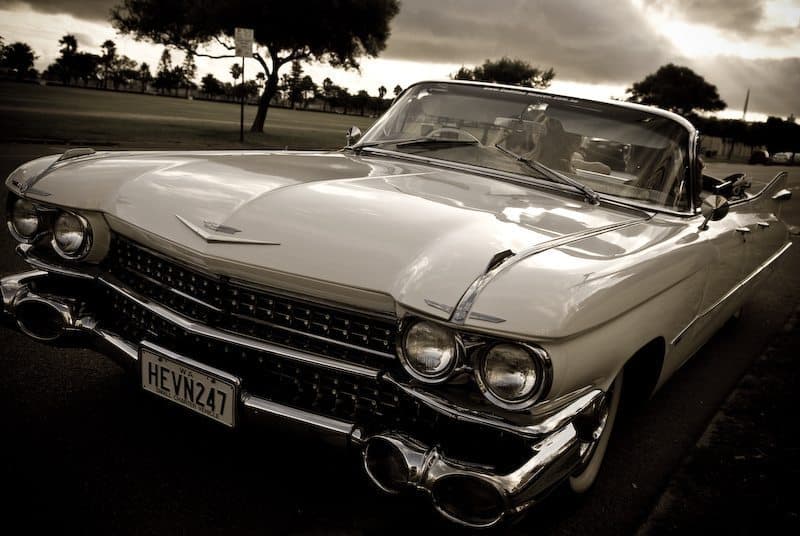 Finally, in first place for the Nostalgia Assignment is image m8642 Calvin Bradshaw, username calvinbradshaw with no space. Congratulations Calvin, on taking first place, and on shooting such a wonder photograph. The photograph is called Great Expectations, and Calvin explains why in his with the image, which I’m going to take the liberty of reading out here. 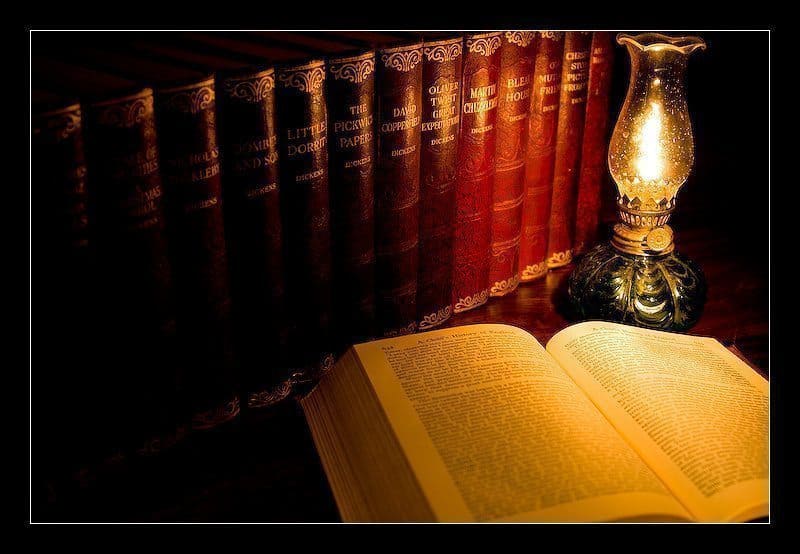 “When he was young, my grandfather lived in the UK (Chepstow, Wales). In the depression following WW1, there was no work, no food, and so his family sent him to Australia on a ship. He was 15 years old. Every month they mailed him a book, and he sent back food parcels. As bad as it was, he longed for the ‘mother country’ and the books were his link back to those times past. He gave me all his books (80-100 of them), and I treasure them. This is the Charles Dickens collection (hence the title). I have photographed the books with the light from an oil lamp from the same era, creating what my grandfather may have experienced when reading. Exposure was 10 seconds at f/4 with just the light from the oil lamp and a small amount of ‘painting with light’ from a torch onto the base of the lamp and the book. Minimal post-processing in Lightroom only (exposure, blacks, vibrance), then export to jpg with border”

Calvin also gives a link to his Web site which is www.calvinbradshaw.com. Great Web site with some great photos Calvin! Thanks very much for sharing. Back to the winning shot though, I love this picture too. The warm light from the oil lamp is used very well here, and the painting with light that Calvin did is very subtle, to the point that you can’t tell it’s even been done. The position of the open book, and the angle of the line of books across the frame makes the whole image seem very well perceived and execution to me. Very well done indeed! A very worthy first place Calvin! I have already mailed you with details of how to let me know which print you would like from my own online gallery at martinbaileyphotography.com, which I will send out to you free of charge as a prize for your own winning image.

So, moving on now, to the next assignment for which the theme is “Abstract”. The word abstract itself means to kind of a brief summary of a more in-depth subject. In art, it is often used for paintings made up of lines, splashes and other man-made shapes that can sometimes have no real meaning or objective. This is also true when used to describe abstract photography, but it also I think links back somewhat to the meaning as in the summary of a larger subject, as in, we can often take a photograph of a small part of a larger subject to make a somewhat abstract image. Let’s take a look at a few of my photographs that I would consider to be a little abstract to emphasise my point.

First, let’s look at image number 1153, in which we see an photograph that I titled “Abstract Rain”. This is simply rain falling on top of a black painted metal box outside a shrine here in Japan. I shot this with my 70-200mm lens with an aperture of F4, to throw much of the foreground and background out of focus. I’d basically just gotten in really close and composed the shot so that the larger puddle of rain fill much of the frame from the center over to the left side, so that we could see the ripples as rain landed in the puddle, but had only focussed on a small area at the tip of the larger puddle. The result is a rather abstract image, although it’s easy to see what it is. 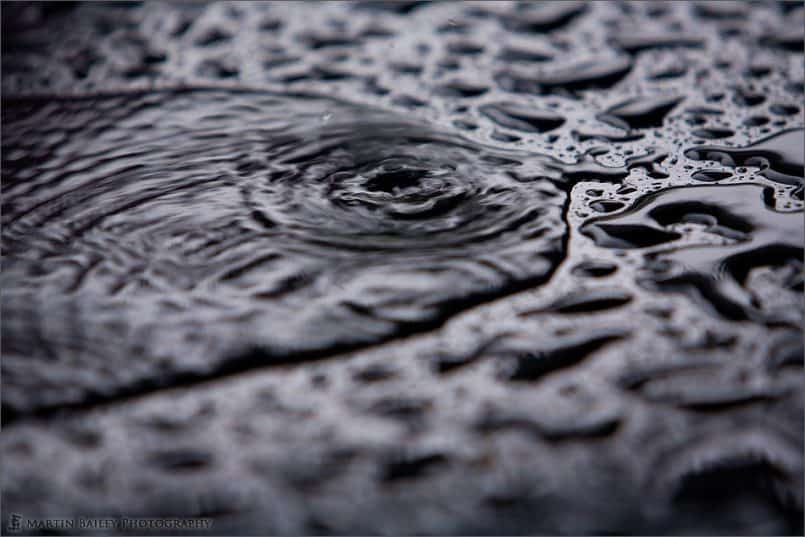 In the next image, number 1323, I’ve zoomed in very close on the eye-like patterns on a peacock’s feathers for another relatively abstract image. These patterns are very distinctive and well know, so again it’s easy to see what the photograph is of, but it’s just a small portion of a larger subject, the peacock. There can be a tendency to try and include the whole subject when taking a photograph of something, and this is not always necessary, and come sometimes actually take away from what we really want to say with any particular photograph. This one was shot at 280mm with the 70-200mm with a 1.4X Extender fitted, to enable me to get in nice and close like this. I’ve relied on the texture of the surrounding feathers here to make it a somewhat abstract image, not created an abstract image by using a shallow depth-of-field. 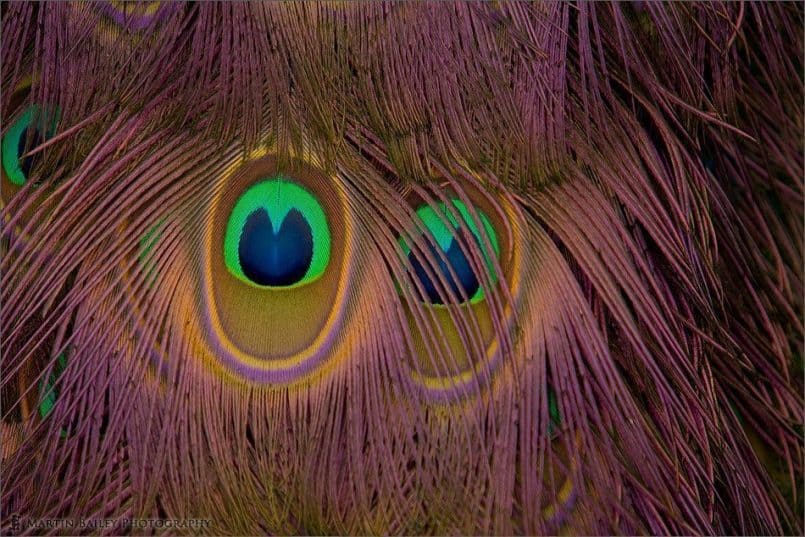 The last example image, number 1639, again contains something that keeps us linked back to reality, which is the yellow maple leaves in the bottom left corner. However, I’ve again used a wide aperture to throw the brightly coloured yellow, orange and red leaves in the background totally out of focus, making a very abstract, if not somewhat psychedelic looking image. Positioning of the leaves against the background was very important here, to remove the yellow leaves from the yellow in the background, framing them with that purple-red portion of the background. 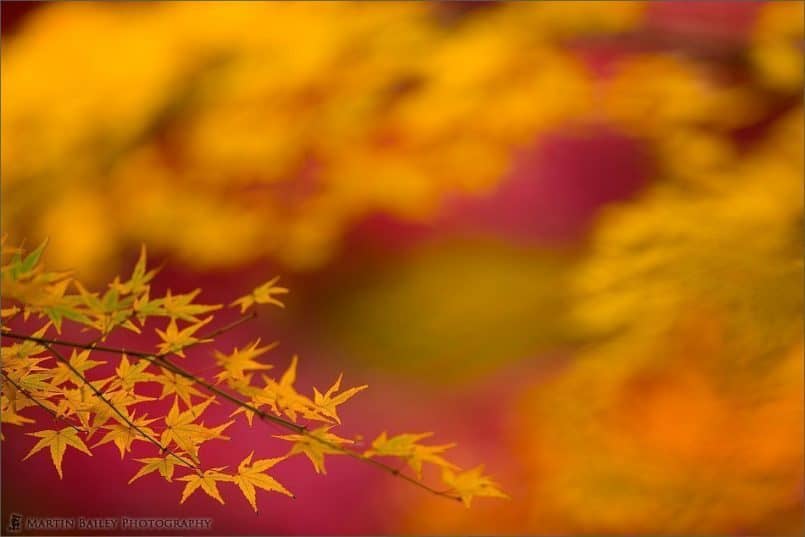 These are just some ideas, and I know, as usual, you’ll take this assignment and surprise me and the other participants with your own interpretation. Remember that you can only submit one photograph for each assignment, and your image must have been shot on or after the start date, which is April 4th, 2008. The assignment will run until the end of Sunday the 18th of May, when I will close the gallery for entries and start the voting for a further two weeks, until the end of Sunday the 1st of June. At that point I’ll close the voting and create a Podcast similar to this one, announcing the winners of the Abstract Assignment and kicking off the next Assignment. Remember that the winner will receive a Fine Art print of their choice on the paper of their choice from my online gallery at martinbaileyphotography.com. All votes will be accumulated until I find a sponsor that is willing to give us something nice as a prize, and then we’ll give that as a grand prize to the photographer with the most votes at that point, in addition to one of my prints for the winner of that particular assignment. For the key dates and further details of the assignment guidelines, take a look at the assignment forum on my Web site. I’ll also put a link into the show-notes if that’s easier for you.

So, that’s it for today. Once again I’m sorry for not releasing a Podcast for the last few weeks. I do have a number of partly prepared Podcasts that I intend to get out as soon as possible, and with some luck I’ll be able to catch up a little to fill the gap made over the last few weeks. I’m a little bit worried as I have a business trip lined up in a few weeks time, so I’m hoping to pre-record something for that time too, so I really can’t make any promises.

Well, thanks to all of those that participated in the last assignment, and I look forward to seeing what you turn out for the Abstract assignment. And with that, all that remains to be said is thanks for listening, and you have a great week, whatever you’re doing — Bye-bye.