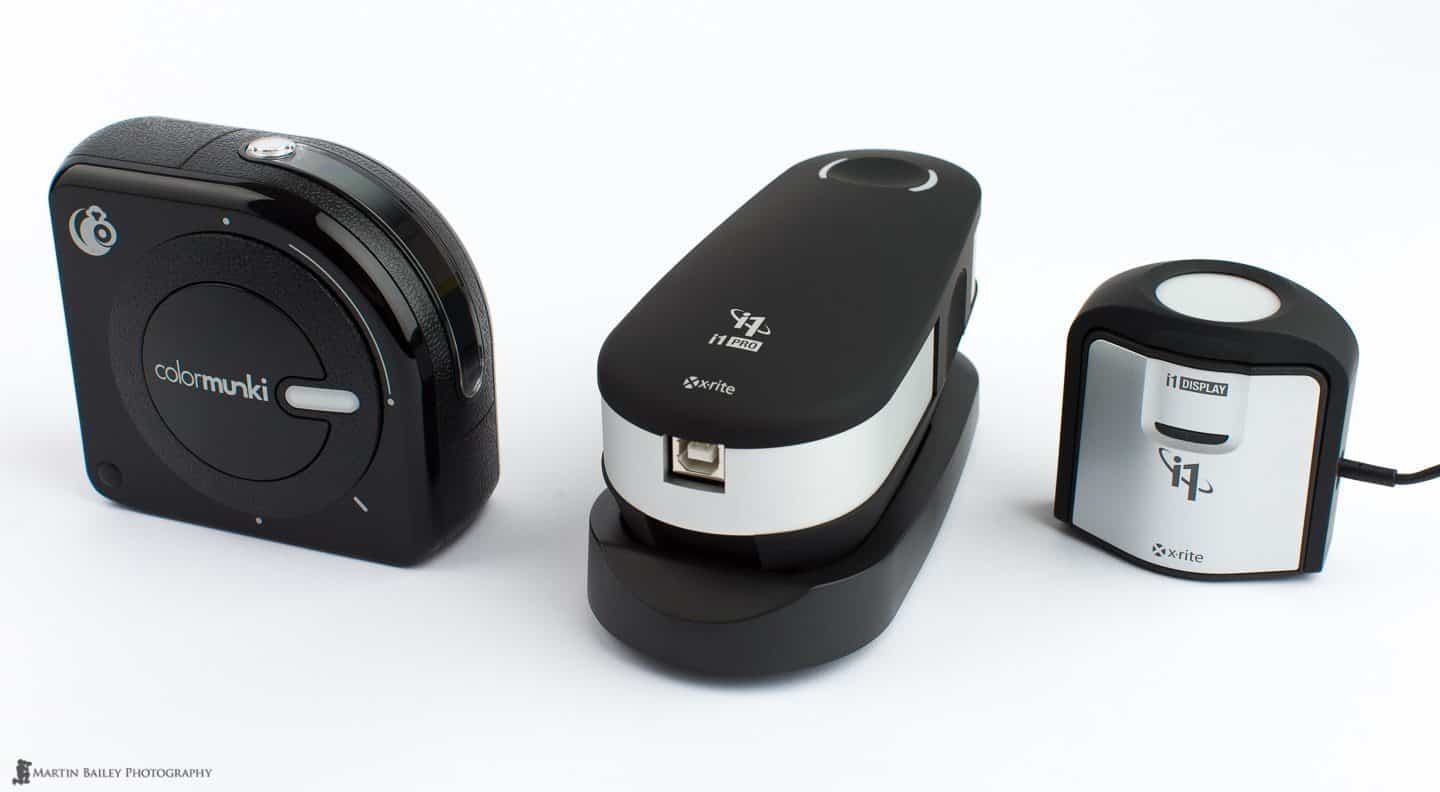 Welcome to Episode 20, which is the first part of two episode on colour management. In this episode, part one, I’m going to discuss how I calibrate my monitor to ensure that what I am seeing is the same as anyone else that also have a correctly calibrated monitor, and more importantly to ensure that the image I work with can be printed with faithful colours. Following on from this, in part two next week, I’ll explain how I use printer profiles in Photoshop to ensure that what I output to any given paper is as close to what I see on my calibrated monitor screen as possible.

I first mentioned that I would do a Podcast on this in Episode 12 on my Digital Workflow. Thanks to Julian Foley, screen name FireBall on the MBP forum for prompting me to talk about this. Julian from Angus, Scotland, has just bought a new monitor and was hoping for some calibration tips. Congratulations on your new monitor Julian. Today I’m only really going to talk about what I do, but I hope you and the other listeners find it useful.

The importance of calibrating your monitor is two fold. Firstly, you need to know that the colours you are viewing on screen are an accurate representation of the colours you’ve captured with your camera. Without doing this, you may well not be able to print an accurate image either. Also, you need to know that what you see on your screen is exactly the same as what someone else will see on a properly calibrated monitor. I’ve heard photographer’s say that they do not like showing images on the Web because they have no control over the colour rendition, brightness and contrast on the monitors of the viewers. This is very true. The only way to really minimize this concern is if everyone calibrates their monitor. Of course, that’s unlikely to happen, but it is a state in which it would be nice to be.

Anyway, moving on; if you are going to calibrate your monitor, and you use Adobe Photoshop, you will probably need to disable the Adobe Gamma Loader before hand, as this will conflict with the profile that you create with your calibration device and software and later load each time you boot your machine. To do this on Windows, you just need to delete the Gamma Loader shortcut from the Startup folder in the Program Menu and reboot your machine. I’m not sure how to do this on a Mac, but I’m sure it’s just as simple. Maybe someone could let us know on the forum.

We should also note at this point that some cheaper monitors don’t allow you to modify the RGB, or Red, Green and Blue colour settings individually using your monitor’s menu. You can do a certain amount of calibration without this but I don’t know how much. If you want to get the most out of calibration, I suggest you first check that your monitor allows you to modify the RGB colours individually. On my monitor which is an Eizo, I can modify these by selecting Colour Management and then Gain from the Screen Manager, which is the monitor’s menu accessible with the buttons on the front of the monitor. Another tip here is, if your monitor’s menu allow you to move the menu to locations other than the center of the screen, move it to the top right, or one of the other corners. This will allow you to change the settings while you have the calibration sensor in place on your screen.

I use a tool called a Spyder2 Pro from ColorVision. This tool is made up of some software that you install on your computer, and a Spyder or sensor, that you hang over the front of your monitor. Apparently Spyder2PRO can be used to calibrate CRT, LCD and laptop monitors and digital projectors. There is also a product called Eye-One Display 2 from Gretag MacBeth which does pretty much the same thing. There are cheaper and more expensive calibration tools in both of these company’s ranges and I’m sure there are other companies around that offer similar products. I’ll include a link to both the Spyder2Pro page and the Eye-One Display 2 page in the show notes. You can take a look for yourself and compare the specifications and other offerings from these companies to decide which to go with. The important thing is that both provide a sensor that fits onto your monitor screen and views the colours your monitor produces, and after calibration create a profile file that is loaded when you turn on your computer.

As I say, I use the Spyder2PRO. Note that the first time you use it you have to install the software etc. but you can change the settings at any time later during the process I’ll work you through next, so I won’t go into details of the installation today. It’s really just a case on banging the CD into the tray and clicking through the install.

Firstly attach the Spyder (or sensor) to the USB port of the computer and start the calibration software. The Welcome screen tells me that the assistant is going to help me to adjust my monitor and create a custom ICC profile. During the process the Tonal Response or Gamma, the White Point or Colour Temperature, and the Black and White Luminance will be adjusted.

I click the next button and I’m reminded that the monitor needs to be turned on for at least one hour and the Spyder has to be connected and allowed to warm up for at least five minutes. I need to disable screen savers so as the screen doesn’t change during the process and make me have to start over. I also have to ensure that no light is falling onto the monitor face. I usually do this at night and just turn off the lights while running the tool. If you do this during the day, draw the curtains or pull down the blinds. I’m also reminded that for best results set the display to 24bit colour or better.

When I click next I’m told that I have selected LCD as the monitor type, this was during the initial setup and the name of my monitor is also displayed. The Gamma is set to 2.2 and the White Point or colour temperature of my monitor is set to 6500 Kelvin. The luminance mode is set to Visual as this is usually fine. You can choose Measured Luminance Mode which allows you to specify the desired values for Black Luminance and White Luminance. These values are then displayed during the luminance adjustment steps and you are prompted to adjust the appropriate monitor control until the measured value meets the desired value. If you leave the Luminance Mode as Visual, the tool will set these values for you without any intervention. Note too that you can select the Change button here and change any of these settings as required.

On the next screen I can select the controls which exist on my monitor from Brightness, Contrast and Backlight. I don’t have a backlight option or brightness option so I only have a Contrast selected here. On the following screen I’m reminded to set my Contrast back to the factory defaults.

On the next screen I can change the contrast to adjust the White Luminance. It is recommended to leave this as the factory default, as this usually provides the best results. Basically here I’m just making sure that I can distinguish between the four separate blocks on the screen. On the next screen I can select the colour controls that I have. On my monitor I have RGB controls and preset Kelvin values, but I don’t have a Kelvin slider, so I just check the two that I have.

From the following screen I am guided through setting the RGB settings. At this point I have to place the spyder in a position in the center of the screen so that the colour displayed on screen by the software can be read by the spyder, and then click the continue button. The sensor is initialized and the the Red, Green and Blue samples and the White Point are read in succession. I then see a three bars, one red, one green and one blue, and I have to adjust the RGB gain controls until the top of all the bars is aligned within a range displayed on the monitor. I’ve been calibrating my monitor for 6 months or so now, and the values remain pretty constant at 92% red, 96% green and 100% blue.

Once I click the continue button after this, the black point is read first, and then the program reads through the red, green and blue samples again in minutely varying stages. It starts off at black and then gradually changes to a full red and then resets to almost black and works through the varying stages of green then blue. After this, it works through a selection of gray samples and that is the last stage of the actual calibration. The calibration process takes about ten minutes or so to complete so including the settings I made earlier the whole process takes between 15 to 20 minutes. You don’t have to touch anything during this final stage, so it’s a good time to go and get a cup of coffee or something. Just don’t turn the light on, or you’ll need to repeat the process from scratch. Once done, you remove the spyder from the screen and click through a few more dialogues and then you are given a suggested name for the new custom profile that you’ve just created, which you can change if you want. This new profile is automatically set, until you change it again that is, each time you boot your machine. On the second to last screen you can actually switch between the previous settings and the settings after calibration to see the difference. The very last screen gives you a quit button or the option to calibrate again.

And that’s it. Your monitor is now as close to a standard as it can be, so you can be sure that what you see on your screen is very close to what others with an accurately calibrated monitor will also see. Of course, the saturation and other attributes of your monitor may well vary, but you know that it is as close as it can be. Note that if you use a Mac and have multiple monitors I believe you can actually calibrate both separately and apply the ICC profiles on a per monitor basis. Unfortunately Windows does not allow you to do this, but as I only use my second monitor for things like the toolbar and various palettes of Photoshop, I’m not too worried about the colour. Also, my second monitor is a very cheap LCD that I stand on it’s side and rotate the image so that I have the feel of a very wide monitor, but not as expensive.

So now that we have a calibrated monitor and know what we are looking at is accurate, let’s talk about the next stage, which is setting the colour space in Photoshop and then on to printing.

Show Notes
The Music in the first 28 Podcasts is copyright of William Cushman © 2005, used with kind permission.