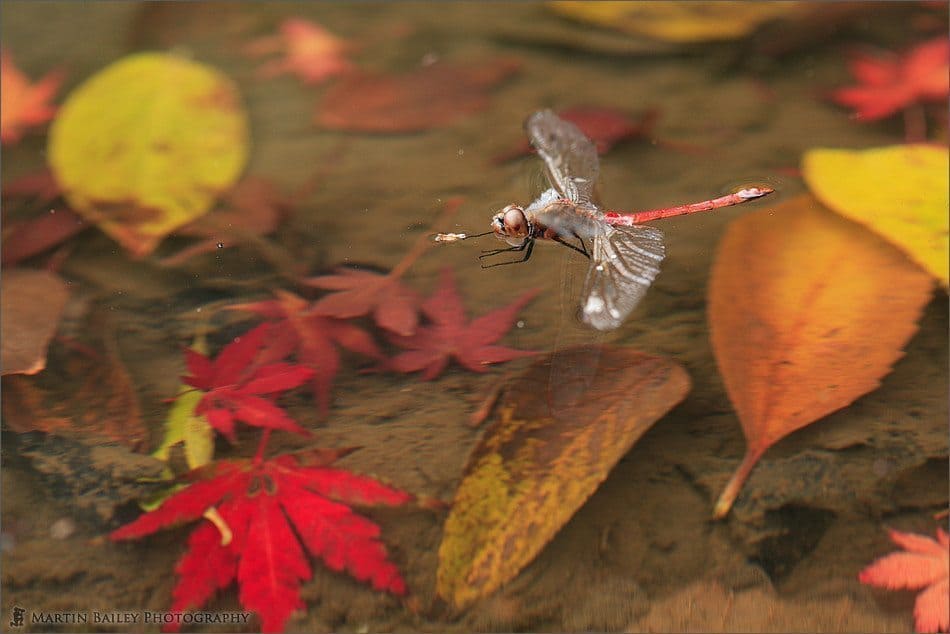 Welcome to episode 15 of the Martin Bailey Photography Podcast. This week, in addition to talking about a simple technique, which is using a polarizer to reduce reflection in water, I’m going to touch on the somewhat controversial topic of whether or not a nature photographer should extend a helping hand to animals in distress or danger.

First I’d like to talk about a technical decision I made to place a polarizing filter on my macro lens when shooting a drowning dragonfly recently. I had just knelt down to photograph a red maple leaf that was floating in a shallow pond in a park. A moment later a red dragonfly plummeted into the pond. I immediately recomposed to capture the insect as it grappled its way up onto another leaf floating on the surface in a bid to stop itself from drowning. I realized that there was a lot of reflection on the surface of the water at this angle, and so reached into my bag for a polarizing filter. PL filters are often used to intensify a blue sky or to take the sheen off a glossy surface such as painted objects or even leaves on trees. PL filters also work as well to take the reflection off the surface of water to allow us to see clearly into the water. 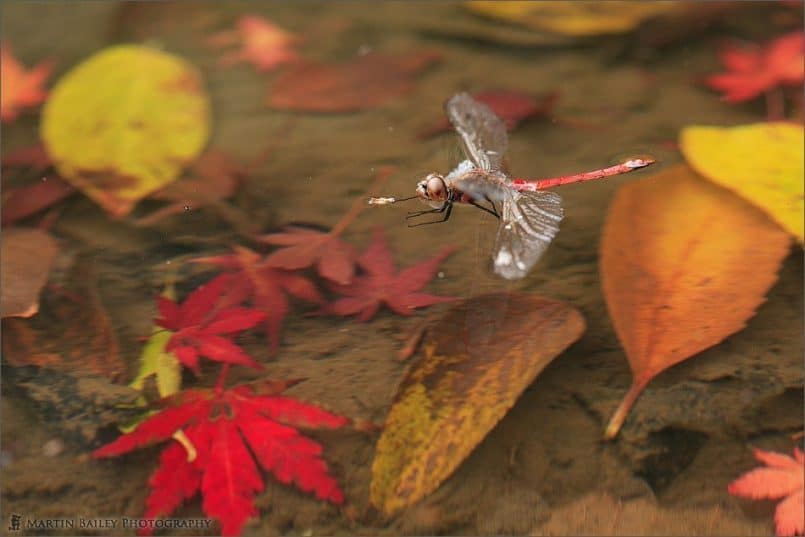 Take a look at photo number 776 and you will see in this first shot that the dragonfly looks to be almost suspended in mid-air. There is very little to let you know that the bottom half of the dragonfly and the rest of the objects in the shot are under water, although the refraction of the water does seem to distort the objects a little.

I actually turned the PL filter after this first shot to allow a little more reflection show in the water as I felt I was close to going too far. I kind of like the composition of the first shot though with the way that the colourful leaves are placed in the frame and the main subject, the dragonfly is very sharp along the length of its body. Also I like the way the wings are reflecting a little off the water, which is another of the indications that it is actually floating in a pond. 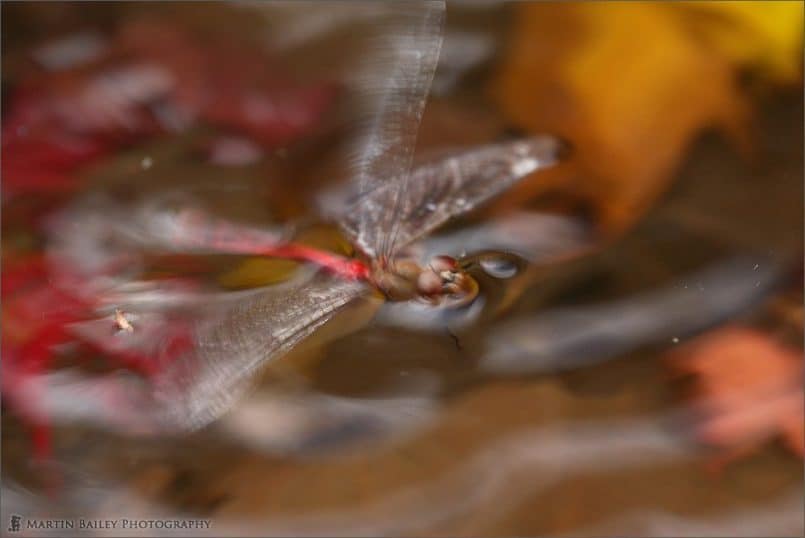 Let’s take a look at the second shot for today, which is number 777. I made both of the first two photos with an aperture of F5.6 at 1/30 and 1/40 of a second respectively. Both were at ISO 400, so you can probably appreciate that the light was not great on this day. The result of the slow shutter speed lends the second shot a much more abstract feel, showing the wings blurring in motion as the dragonfly panicked, struggling to stay above water. Even the eyes are not sharp in this image but I like abstract feel and the large blotches of colour of this shot. Also note that as the ripples on the water where at a different angle to the water’s surface, they are reflecting a little light, which enables us to see the ripple effect. 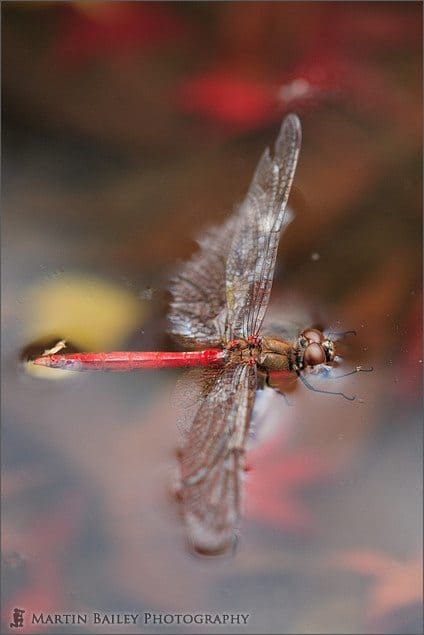 The third and last image for today is number 778. I chose this image also because of the blotches of colour, but also the dragonflies head and body are incredibly sharp. This is a tribute to the Canon EF 100mm F2.8 Macro Lens and the sharpness of the images that the EOS 5D creates. This last shot was made at F4.5 at 1/100 of a second at ISO 800. I had increased the shutter speed because I wanted to get a sharper image of the dragonfly struggling, but ended up selecting the abstract shot which I just introduced as the second instead of one with a faster shutter speed.

So that’s it for the technical side and the artistic reasoning behind my selected shots for today. Now I want to talk about the moral decision I made to leave the dragonfly in the water.

Firstly, while I was knelt down shooting this dragonfly, a small crowd gathered. First it was another photographer that saw what I was snapping and decided that he wanted some too, shooting it with a long telephoto from about 5 feet away. Then two middle aged couples also came over to take a look. We conversed a little as I continued shooting and one of the woman said, shouldn’t we help it out of the water. I, without hesitation stated that this dragonfly usually has no problem with water, but right now, as autumn changes to winter, it is too cold for the animal to move properly, let alone fly, and it is its time. Removing it from the water is going against nature. Her husband agreed, and a few moments later they moved on, leaving me to continue shooting.

I recall seeing a documentary when I was a kid, in which a seal pup was struggling to get out of a hole in the ice. The camera man filmed the pup for a few hours as it slowly weakened. Eventually the pup slips down into the icy water, and the left is history.

I also recall being distraught and asking my Mum why the cameraman didn’t help the pup. My Mum’s answer was something along the lines of, “If the camera man was not there, the pup would have died anyway. It wasn’t strong enough to get out of the ice-hole, and so it dieing is just natural selection of the strongest”. “Survival of the fittest” she may have said. She went on to explain “The cameraman is there to record what’s happening, not intervene. If he intervenes, he tips the balance of nature”.

Now, my mother is a loving, caring person, and would not hurt a fly, but she had a clear statement on how this should be, and although distraught, I remember agreeing to myself that what my Mum had said was right.

I remember too seeing a movie as a kid where someone builds a time machine and travels back in time a million or so years. Someone on the expedition kills a butterfly and when they came back to present day everything was changed. They’d changed the course of history by killing the butterfly. Now I don’t think that saving one seal or one dragonfly today is going to greatly change our future, any more than leaving it to die would, but maybe the idea here is the same. As observers, we should not interfere.

Of course, I do think there are areas where man has to intervene or control our actions, because we are messing around with our planet far more than we should be, and are causing many of the problems. Things need to change in a lot of areas, but getting into that here would take too long. I’m just talking about natural perils, not man made ones.

This is a difficult subject indeed, of which I have only scratched the surface. I’m sure many of you have your own ideas. I’ll start a poll in the forum and put a link in the show note. Let us know how you feel about this. Should we lend a helping hand or leave it to mother nature. In addition to casting your vote, I very much look forward to hearing your views on this subject too.

Now, before I wind this up, I want to leave you with a thought, from one photographer to another. While shooting, I found that a little adrenalin kicked in. Sure, it’s only a dragonfly, and though not wanting to belittle any living being’s right to live, I don’t want to compare my experience to someone that may have to go through the ordeal of watching a seal pup drown, or a lion eat one of it’s cubs. But, I must say that while shooting I became a little excited about the possibility of capturing some great images. I think I became a little sensationalistic. It was only as I stood up and thought of walking away, with the dragonfly still drowning in the pond, that I thought, maybe, just maybe I should just lend a hand. Maybe I should poke a finger into the water and help this guy out on to the bank. Maybe the reason I was so defensive to the middle aged lady that we should not intervene with nature, because I was a little worried that she might help the insect out of the water and ruin my chances of getting a shot. Maybe my love of photography outweighs my love of nature. Wow! Maybe I’m not the caring and considerate naturalist that I would like to think I am.

Speak to you next week.

Get this post's short-link:
← White Balance (Podcast 14) Composition - Include an Accent (Podcast 16) →
Become a Patron