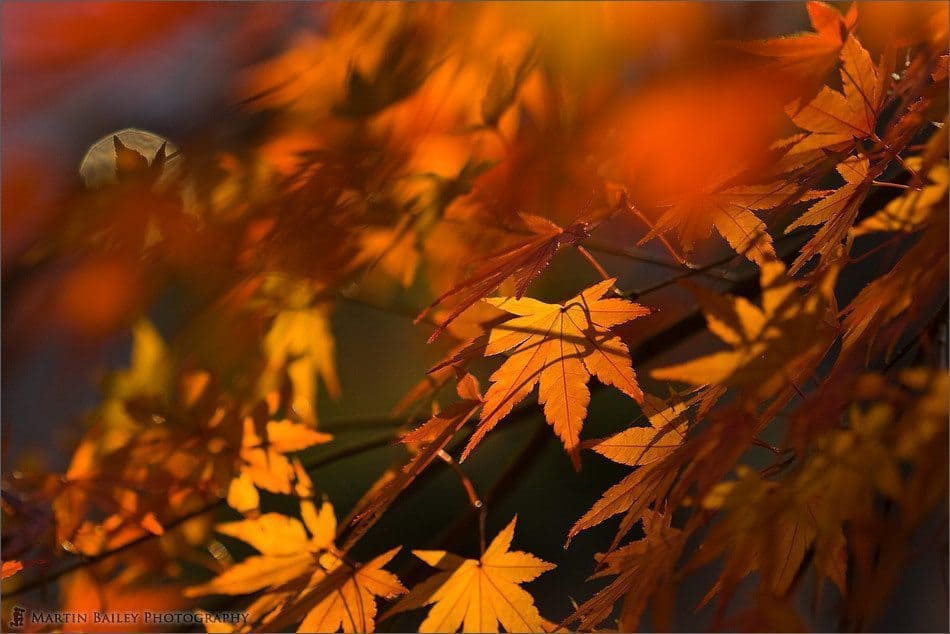 Learn how to use Boke or out of focus area of an image to add a dreamy feel to your shots. Plus something to try beforehand to lessen the shock of loosing extra zoom when switching to a full size sensor DSLR with no crop factor, such as the Canon EOS 5D.

Welcome to this week’s Podcast, which will be episode 6. Before I get started today I wanted thank all of those who’ve contacted me with feedback and questions. I really appreciate it. Kind of as a follow on from my Canon EOS 5D review from episode 5 I wanted to share with you my reply to Nigel Byde from Tewkesbury, Gloucestershire in England, who had a couple of questions regarding switching to the 5D from his current camera, the 20D.

Nigel wrote, “I enjoyed your show on the 5D, but was wondering if the 3 frames per second has been an issue at all in certain situations. I use a 20D at the moment to shoot my local football league side from the touchline using the 5fps and benefit of the 1.6 factor. The frame rate on the 20D is a big factor for me but the full frame sensor is also tempting, although I’d loose focal length on my 70/200 f2.8 IS lens.”

Well Nigel, for landscape and most wildlife I don’t suspect the 3 frames per second will be a problem, but when shooting Japanese Red-Crowned Cranes in the past with a 10D which is also 3 fps I found it somewhat stressful. Actually one of the reason’s I bought the 20D was because of the fps so I am a little worried about this. Conversely though, I shoot only RAW, and when shooting fast moving wildlife the drop from 9 to 6 continuous RAW shots after I upgraded to the 20D from the 10D was probably even more stressful.

I’ve yet to make up my mind fully, but most of my shots will probably benefit more from the full-size sensor than from the faster fps of the 20D.

The drop from 1.6 crop factor to 1:1 focal length for your football shots will be a big factor. My advice, and anyone that is concerned about this can try this, is limit yourself to the shorter focal length and see how it feels. In Nigel’s case the maximum focal length that he’s currently getting with his 70-200mm lens on a 20D is 320mm. On the 5D 200mm is 200mm, so you can simulate this on the 20D by limiting himself to 125mm, which is 200mm including the crop factor.

Try and find some tape that will not leave a mark on your lens when you take it off, and tape the lens at 125mm for a while, if possible for the length of the game to see how restricting this is. You can try to just not go above 125mm if you can resist the temptation to, you know, just for that one shot when you really need it. This is important because once you put that 70-200mm lens on a 5D you won’t be able to get any closer.

One other thing to bear in mind is that in the situations where I really would like to have the 20D crop factor, the way I see it, I can just crop the center 8Mega pixels from a 5D shot, and although I haven’t calculated it exactly yet, I imagine that would give you an image size comparable to that which I’d get from a 20D. So you’d have the best of both worlds.

Anyway, please do let us know how you get on Nigel. It’ll be interesting to hear what you decide to do.

So, moving on to today’s topic, which is going to be a relatively quick one. In Episode 5 last week I mentioned the Japanese word boke that in recent years I’ve noticed more and more people using in reference to the out of focus area of an image.

Well, boke in itself is a very big subject. Different lenses produce a different type of boke, some pleasing and some not so pleasing. It differs based on a lot of factors, such as how many leaves there are in the apertures diaphragm, and some lenses such as the new 24-105mm F4L IS lens that I mentioned last week, have a truly circular aperture, making for a very pleasing boke.

If you want to read up on the technical side of Boke, there is an excellent essay called Understanding Boke by Harold M. Merklinger on Michael Reichmann’s Web site, the Luminous Landscape. You can look for Bokeh in the “Understanding Series” menu, and I also put the address in this Podcast’s summary: http://www.luminous-landscape.com/essays/bokeh.shtml

Now, many people tend to think of the boke, or blurred area of the photograph as the background and what I wanted to talk about today is using boke extensively in the foreground for effective images.

This is not a difficult technique but can produce shots with a nice dreamy feel to them when used correctly.

First, choose your subject. As I take a lot of flowers and leaves, I like to use this technique with these subjects from time to time. Your subject will hopefully have something of interest buried deep inside a bunch of other objects of a similar colour, though you could probably have success with this technique using contrasting or complement, but different colours. Compose your shot so that the main subject or most interesting part of the image, usually the thing that caught your eye in the first place, is off center. You might have success with the main subject smack in the middle of the frame, but I wouldn’t advice moving it off center, or maybe using the rule of thirds. Position the main subject either on one of the four points where the lines dividing the frame into thirds intersect or along one of the imaginary lines itself will work well.

Once you have your shot composed with a number of objects closer to the lens than the main subject, you should be setup to take the shot. The closer the foreground objects are to the lens the more out of focus they will be, adding to the dreamy effect of the image.

I’ve attached four shots to this episode for you to take a look at. To briefly describe them, the first shot, which is number 559 is some Japanese maple leaves when they are red in autumn, that I captured at the end of the day when the sun was low in the sky. This added warmth to the shot and also a patch of light behind a leaf in the top left hand side of the image that is almost like a halo throwing the leaf into silhouette. This shot was taken last year, and will be the sort of leaves most people in the northern hemisphere will be able to see around this time of year, so you can probably try this technique in a similar way yourself pretty soon. 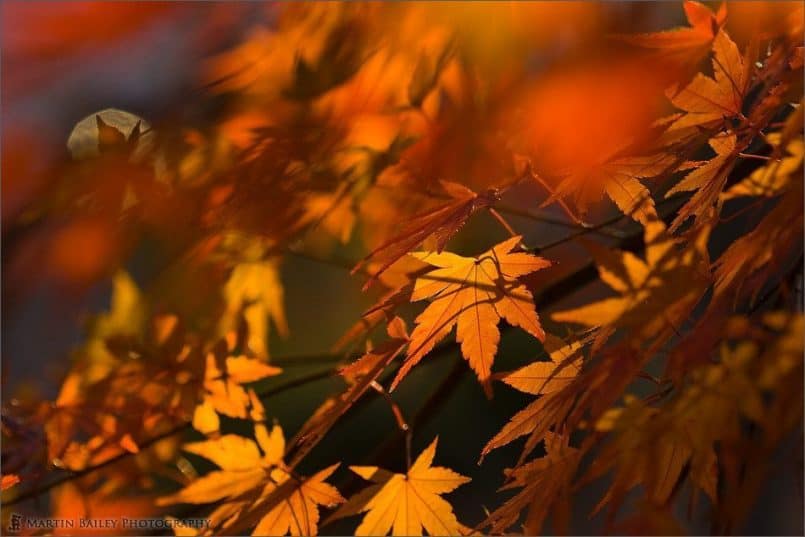 You can also view all the shots by clicking on the thumbnails that accompany this episode on my Web site, martinbaileyphotography.com. From the top page jump to the Podcasts page and look for Episode 6 in the list. And of course you can enter the photo number into the field on the Podcasts page or the top page of my site and jump directly there.

The second shot is of a small yellow blossom. This is shot number 590 and here I chose to really iscolate just the one flower with lots of large blotches of yellow. 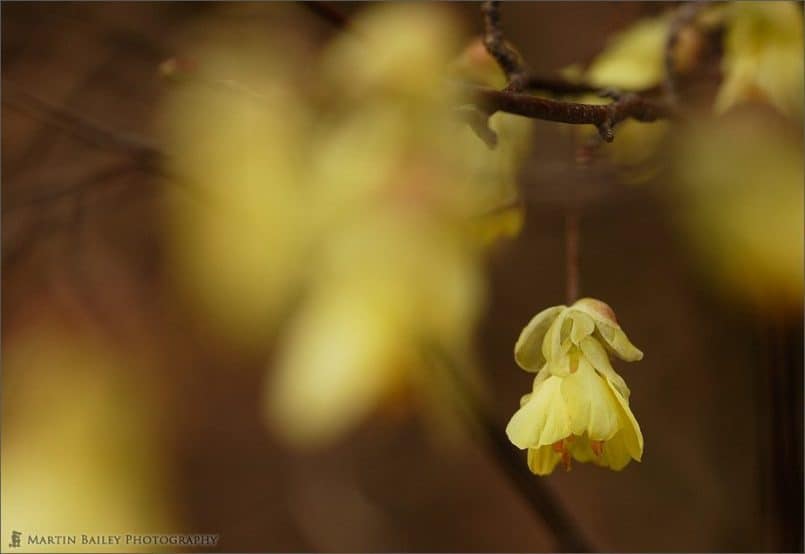 The third shot though, number 644 of a white hydrangea flower has a bunch of subjects in focus, but with lots and lots of white flowers out of focus in both the foreground and background adding the that dreamy effect. 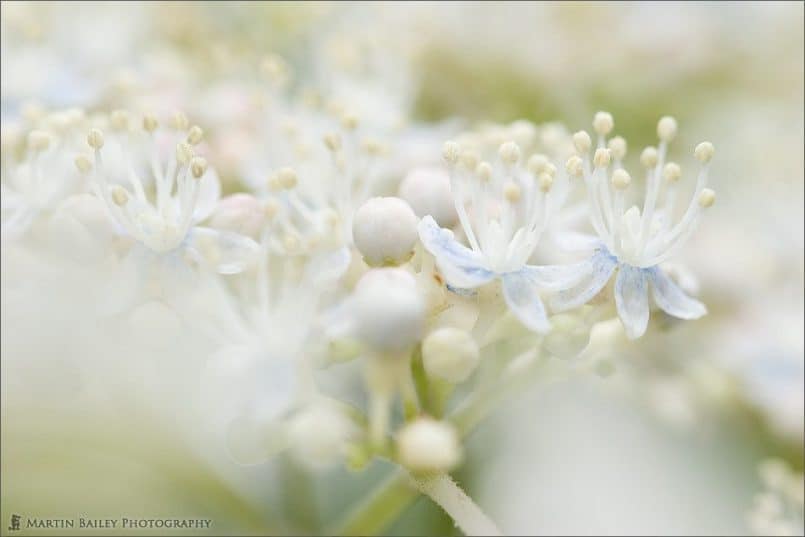 The last shot is number 673 was taken in Hokkaido, the northern most island of Japan in June this year. It was actually at the Tomita Farm in Furano, which is a bit of a tourist trap, but has a few fields of early flowering lavender species, so was a good chance to capture another dreamy shot. You can see that in all shots I have used a shallow depth of field and composed with lots of other flowers or leaves in the foreground to create a nice boke and hopefully, some successful images. I hope you agree. 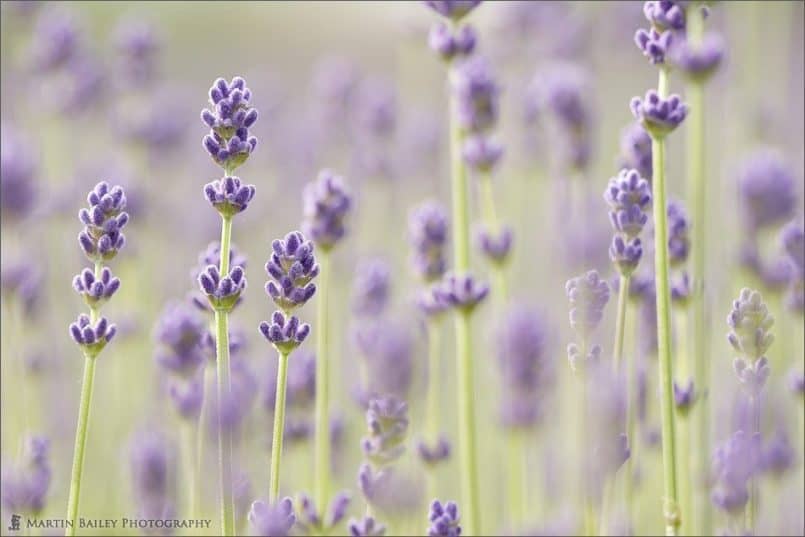 Get this post's short-link:
← Canon EOS 5D Camera Review (Podcast 5) Don't give away your art! (Podcast 7) →
Become a Patron