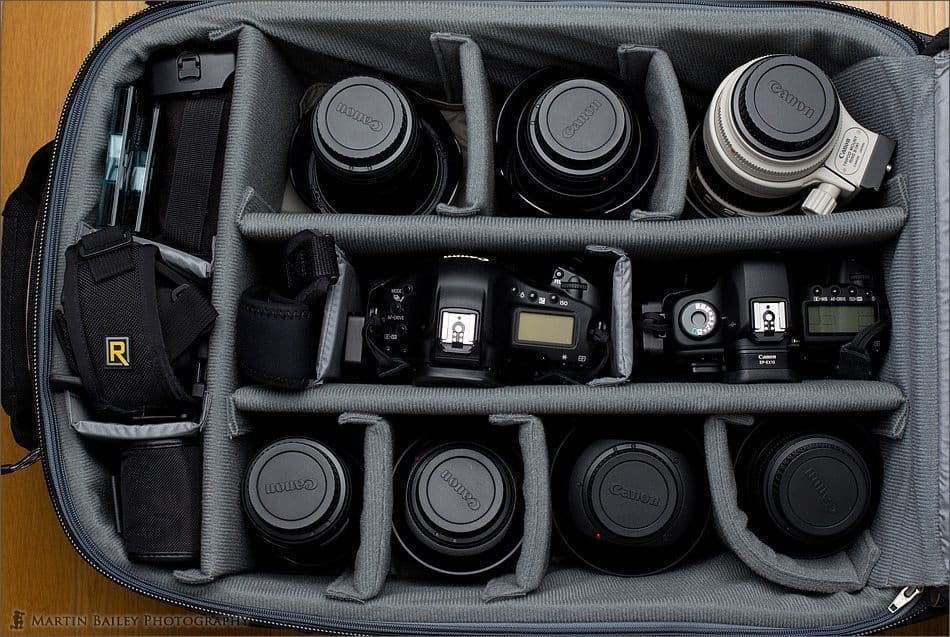 I’ve just started to use an Airport Security™ V 2.0 Rolling Camera Bag from ThinkTank Photo, and decided to do a “What’s in my Camera Bag?” style review, at the same time as talking about the bag itself. This will be a “What’s in the Bag?” for Martin Bailey the portrait photographer, not the Nature and Wildlife Photographer. I’ll follow up with an episode on what I’d take on a Nature and Wildlife shoot in the coming weeks. 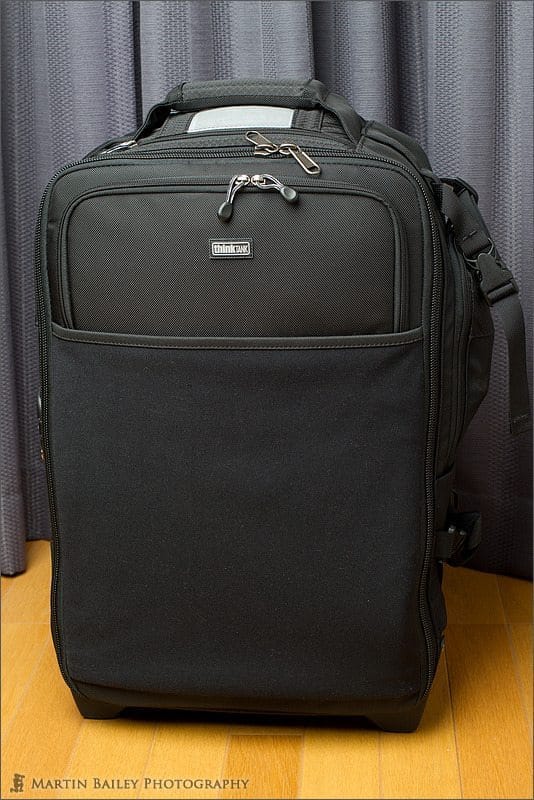 When the Airport Security V2.0 bag arrived, I was initially impressed even by the packaging. I could tell even as I opened the box that ThinkTank Photo are proud of their products. The build quality of the camera bag itself confirmed this of course — it’s incredibly well built.

The materials, the zips, the TSA approved combination locks and roller wheels themselves, everything is top quality and feels great to the touch.

There’s also a metal plaque on the back with a security code to help locate the bag if it gets lost, which may or may not be of help if the bag is stolen, but if it is genuinely lost, this should help. Even just the way it is riveted on though, with a rubberized frame around the plaque seems to add to the overall feeling of quality of the bag. Very nice workmanship all round!

It’s not called Airport Security for nothing. The bag incorporates a TSA approved combination lock, that you clip the two main compartment zips into, and there’s a steel wire attached to the inside of the front top pocket that is also fitted with a combination lock. You can use this to attach to a second bag, or any valuables you might have in the outer pockets.

There’s a third combination lock in a panel behind the shoulder straps in a compartment in the back of the bag, with a very thick and reasonably long steel cable that you can use to secure the bag to a metal pole or other immovable object, if you really have to leave your bag somewhere, like at the side of a conference room as you shoot an event.

Obviously this is not going to totally prevent someone from stealing your bag if you leave it in public all day, but the thick rear cable is built into the framework of the bag, so coupled with engaging the zip combination lock would certainly make this a tough target for something with a mind to walk away with you gear. I also usually loop the straps of my bag around my leg even if I’m going to grab forty winks in an airport lounge, but with this cable you could literally strap the bag to the frame of a metal bench or chair that you often see in airports.

There’s also a business card holder on the top of the bag, which you can use to tell your bag from others on an airport conveyer should you have to check your bag. I think of all my camera bags, this is probably the only one that I feel I could check if I really had to. I really don’t like the idea that the people with the ability to open the TSA locks though, have been filmed systematically rifling through peoples’ bags in the past though, so I’d still be worried until I got my gear back in one piece. If I had to check it though, this would be the bag to do it with.

As I just mentioned, there are shoulder straps in a compartment in the bag of the bag, if you end up having to carry the bag for a way, but with all the security features and solid build, the bag is relatively heavy, so you really should think of these as an emergency measure rather than a regular way to carry the bag around. This bag is a classy, solid bag that hold a lot, but it’s designed for security and to be rolled, not carried. 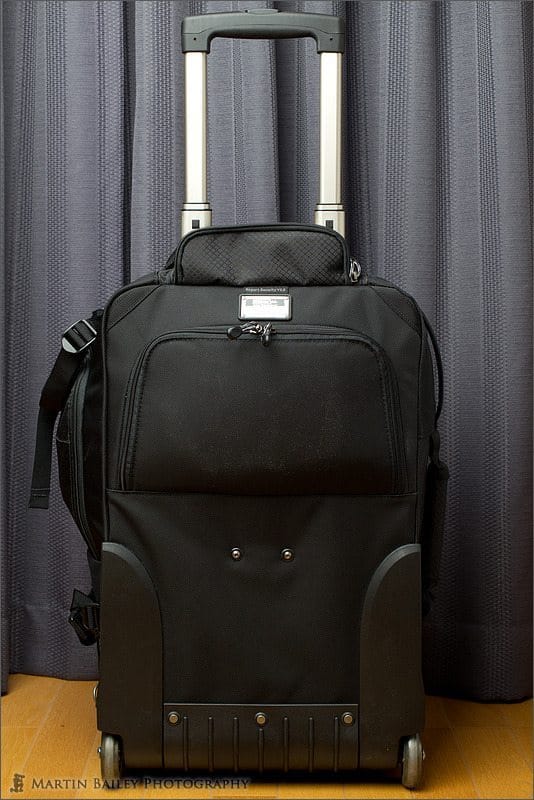 The front pocket has lots of compartments for your valuables when traveling, as well as pens etc. for filling out those pesky customs forms when you fly. There’s also a good sized side pocket on one side. This is the opposite side to the side carrying handle, but it’s also the side to which you attach the tripod holder, so you might not won’t to fill it with fragile objects if you intend to also attach a tripod.

There’s  a compartment on top of the bag, under the carrying handle that contains a rain cover that totally envelops the bag when used. This is very important if you should get caught in the rain, or find yourself on a speeding boat with lots of spray etc. I dare say it would keep out dust and sand if you found the need for this too.

Everything has it’s own place, and a compartment to hide it away when not in use, and the handle for when you are rolling the bag is no exception. Open the zip behind the top handle to reveal the handle, and push the button to lift it out. It’s a good solid handle, and clicks into place at various heights. The highest position is really a good height, so even if you’re on the tall side, you’ll be fine with this bag.

OK, so that takes care of the outside details, let’s take a look inside…

Because the bag incorporates the handle for when you roll the bag, there’s a section down most of the back that is slightly raised, but you can generally arrange the bag so that this doesn’t get in the way too much. For example, as you can see here (right) the bag is deep enough at the bottom to fit a 70-200mm F2.8 lens in without having to lay it down, which would take up more than twice the space.

As I said, this is my portraiture kit, so I’ll take you through what’s in the bag and why I lay it out this way. 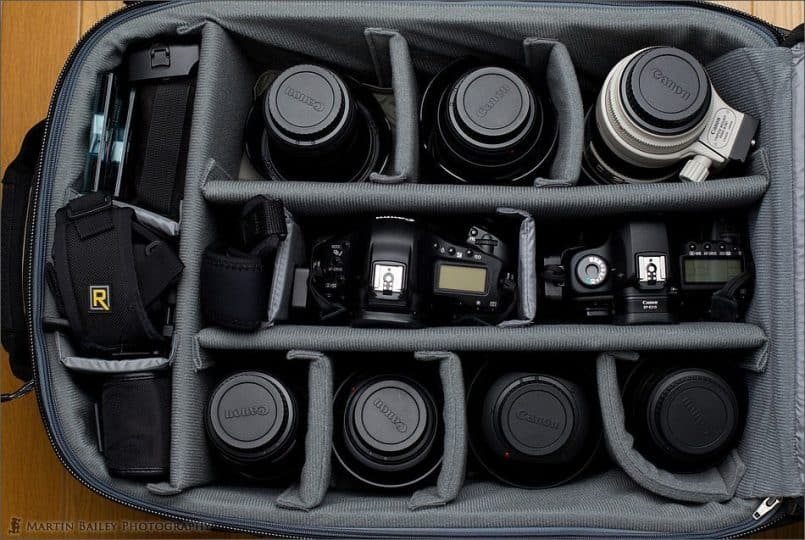 I have it set out so that I have zooms down one side, and primes down the other, with the longer focal length at the bottom in each column. I’m showing the bag sideways in this photo though, so that you can see better.

These are the wide aperture primes that I really like to use for portraiture, but depending on the shoot, don’t always use them as much as I’d like. When shooting groups of people, I often have to stop down the aperture more than I usually would anyway, to ensure that I get every ones’ faces in focus, and I often need the versatility of a zoom when working at peoples’ homes, as I can’t step very far backwards or forwards to zoom with my feet, so I rely on zoom lenses more than I’d like too. They are on the right side of the bag, starting with the 70-200mm F2.8 at the bottom (or far right of this photo), followed by the 24-70mm F2.8 and the 16-35mm F2.8 above that.

Some of these lenses of course are not what you’d commonly think of as portrait lenses, but for the shoot I’m doing this coming weekend, we are hoping to get some environmental portrait shots with a number of people in a largish room, which will require some wide angles. The problem of course is that wide angles are not very flattering for portraits, so I’m also keeping the possibility of doing a multiple shot stitch using images from a slightly longer focal length, which should look a little better from a portraiture perspective. If I can get approval to share the resulting images, I’ll hopefully be able to share my experiences with you later.

I like to keep the lenses in an order like this, so that I know exactly where everything is when I reach into the bag for something. It depends on which bag I’m using, but having some sort of policy that I stick with makes life easier in a fast paced shoot. 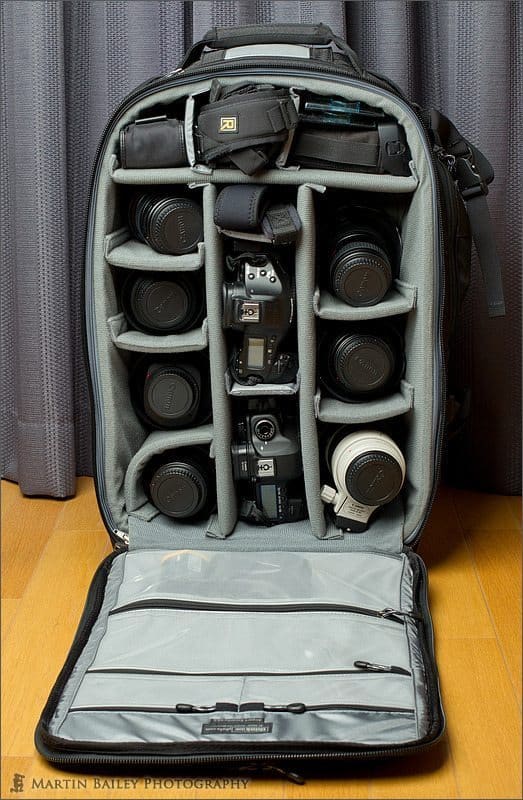 Oh, and the bodies in the middle are the 5D Mark II at the bottom, and a 1Ds Mark III above it. Two straps for the bodies are above that, and then the Black Rapid Twin-Strap at the top center. I switch between straps as makes sense during the shoot.

In the top left is a light meter, which I use when working with studio lighting, and to the right is a bunch of neutral density filters for my lenses, in case I have to darken things down a little to maintain a slow enough shutter speed for my Profoto monolights when shooting with wide apertures.

You can also see that I have a battery in the bottom pocket of the front flap, and next to that is my Angle Finder C, in case I want to get down low for a dramatic angle. I don’t have my rocket blower or lens cloths in here, as I keep them in my photographer’s vest pocket. I do have my ColorChecker Passport, some lens cleaning fluid and some other maintenance stuff in the side pocket as well. I’ll have a couple of Profoto Air Remotes to fire my monolights which I’ll attach to the top of each camera while I shoot and an Air Sync to attach to my light meter, to fire the flashes from the meter to get a reading.

I’ll try to talk more about the monolights later if possible, but for now, here’s a fun photo that I also shot yesterday when I was testing using my four Profoto D1 500 monolights with the Profoto BatPac, which is basically a large powerful battery that I can run all four monolights for a few hundred frames on a full charge. This will be the first time I use the BatPac on a job, so I’ll let you know how that goes later too. 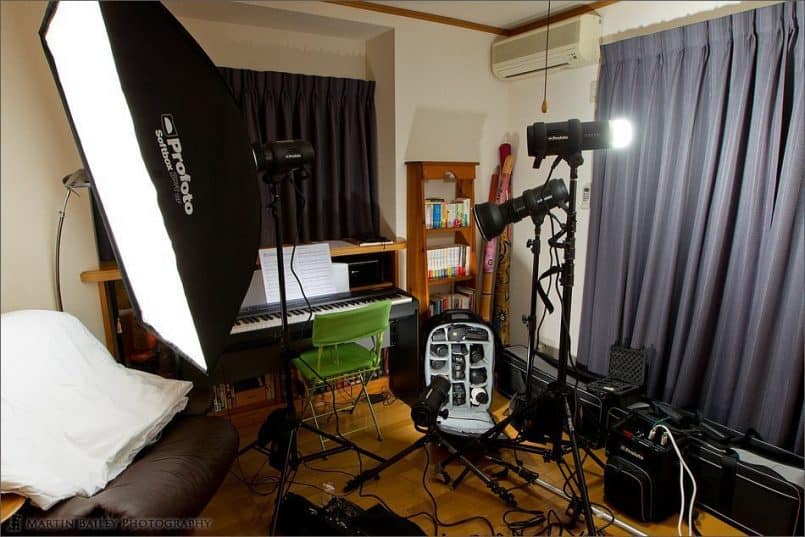 In short, I give a definite thumbs up for the ThinkTank Photo Airport Security V2.0 Rolling Camera Bag. This is a work of art in terms of camera bag manufacturing, and they have spared no expense on the real security measures that could save your gear in a pinch.

Most people reading this will know that I’m also a huge fan of Gura Gear’s Kiboko bag, and I’ll continue to use that for my nature work when I tend to cover more ground off road, and a rolling camera bag wouldn’t make much sense. But from now on, when I’m working on assignments, especially when the customer is around, the Airport Security V2.0 is going to be my bag of choice. It not only gives me the ability to carry a lot of gear, but being able to roll it will keep me from getting tired, and the bag itself just wreaks of quality, so will give my clients a great impression too.