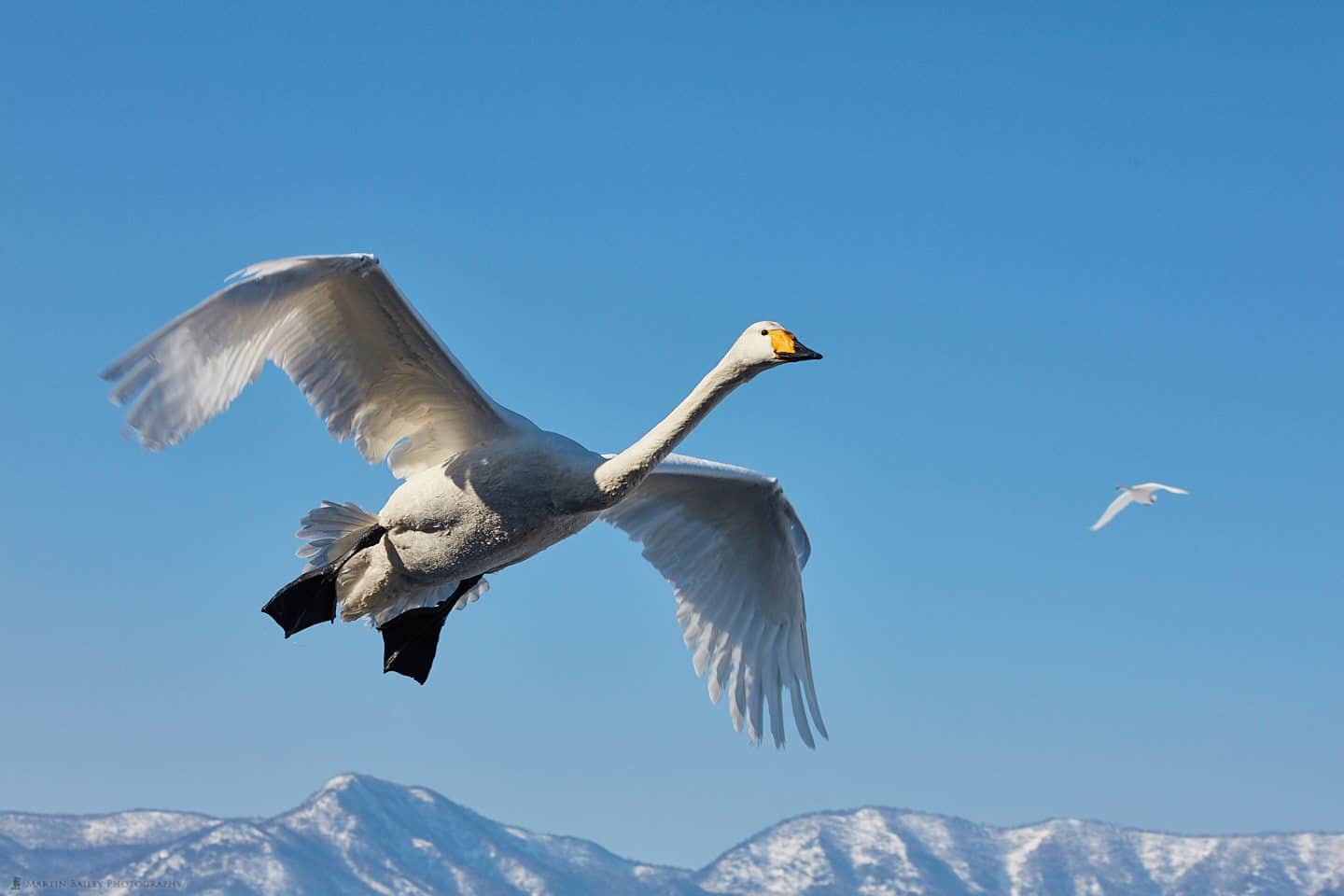 Today we continue our travelogue to walk you through our adventure on the second of my Japan Winter Wildlife Photography tours for 2018, as we visit the Whooper Swans at Lake Kussharo.

We pick up the trail on day six, the middle day of our twelve-day tour. After spending the morning driving over from the area in which we’d photographed the Red-Crowned Cranes, and a brief touristy stop at Lake Mashuu to take in the scenery, we spent some time before lunch at Kotan, a small corner of Lake Kussharo, where there’s a pool of unfrozen water thanks to the hot springs that flow into the lake there. This gives the swans somewhere to gather as they winter here from Siberia.

This is often one of the most relaxing shoots on the trip, and this day was no different. I love just sitting out in the snow, often in the sun, and just waiting for the swans to do something, like this one, as he reared up and flapped his wings a number of times, basically just having a stretch (below). I struggled to decide which of my three favorite frames to share with you, as they all show very different wing positions, but I think this frame shows the most detail in this magnificent animal.

The swan is almost backlit, so relatively dark against the bright snow, but this is what’s helped in some ways to give me the detail that I captured in this image. Swans wings are something that I can look at for hours, so I am always happy to find so much detail to pore over. My settings for this shot were f/11 for a 1/1250 of a second at ISO 400, and I was using my 100-400mm lens at 400mm.

I also enjoyed watching a swan upon the snow beside me as it dosed, then occasionally just slowly opened this eye to look around and check that we weren’t getting too close for comfort (below). Again this is very much about the detail. When I zoom right in on the eyelids the amount of detail recorded is unbelievable and I love the warm colors in this image.

These images were all shot hand-held, although if I recall for this one I probably was resting my elbow on my knee as I knelt in the snow, pretty much like my company logo, that I drew some twelve years ago based on a shooting style that I use a lot when shooting hand-held. My settings for this were a 1/800 of a second exposure at f/11, with ISO 400, and again a focal length of 400mm.

At the end of the afternoon, we did our usual panning session, photographing the Whooper Swans from our geothermally heated beach at Sunayu, as they flew along the strip of thawed lake while Miles Davis played out of the speakers from the nearby restaurant. The shots are relatively easy, although getting a completely sharp head is a little more difficult. We get enough shots to pick and choose a little though. This is my pick from this first session (below).

I like the warm light that was hitting the water again in this shot. We’d waited for the sun to go behind the mountain, but the sky was warming up nicely as sunset approached, and that was reflecting in the water. My settings were a 1/30 of a second at f/16, ISO 500 at 100mm. I was still using my 100-400mm lens but zoomed right out as I was kneeling in the sand just a few meters from the edge of the lake.

The following morning we went back to the lake after an early breakfast in the hopes of capturing some good fly-ins with the mountains in the background. It was nice to get a little bit of mist over the frozen lake, to begin with, although it cleared up relatively quickly. The great thing about photographing Whooper Swans is that they announce their arrival with that big whoop of theirs, so it’s easy to notice them coming, and here I caught one of them whooping in flight (below).

I’m not doing a lot to most of these images in post. Generally, I add a little bit of Clarity and pull the White Point in on the Levels slider in Capture One Pro, just to ensure that my whites are white. I, of course, am still using the technique known as ETTR or Expose To The Right, to get the brightest and highest quality image possible, but the raw processing engines that we use these days generally give you around two-thirds to a full stop of exposure back, so I like to use that additional dynamic range in situations like this.

Also for this image, I ran a graduated adjustment filter along the froze lake, and just brightened it up very slightly, as it looked a little grey compared to the brightly lit swans. That’s about it though, and these things are really just adding a tiny bit of polish, not critical changes. My settings for this shot were f/11 for a 1/1000 of a second at ISO 400, and a focal length of 300mm.

We enjoyed a number of fly-ins, with some nice shots, but one of my favorite close-up images came thirty minutes later, as a group of swans came into land, and one literally floated past me, enabling me to get in this close at 135mm (below).

I also like how there is a second swan in the distance, as this almost feels like a busy airport with a second plane queued up waiting to land after this first one. Of course, that second swan coming into the frame was pure luck, although I was consciously pulling back enough to include part of the mountains, to put this swan in his environment. I love photographing the swans in the mist with hardly any difference between the white of the swans and their surroundings, but when it’s clear like this, I like to try to add a little more of the surroundings for context. My settings were f/14 for a 1/1000 of a second exposure at ISO 640, at 135mm.

At 9:30, we moved from Sunayu to Kotan, and I shot a number of images of the swans in the mist like we see in this image (below). To maintain the dreamy feel of the mist, I didn’t add much clarity to the entire image here, rather using an Adjustment layer and just brushed in some Clarity over the head and neck of the swan.

Also, the stones in the foreground were a little too prominent, so I cloned out a few, and then actually brushed in and layered a few more Adjustment layers across the bottom of the frame to reduce the clarity of the rocks, making the mist or steam around the base of the swan a little bit stronger. My settings for this were f/14 for a 1/800 of a second at ISO 500, and a focal length of 312mm.

About fifteen minutes later, as I was still waiting for something to happen in the mist, I heard the Whooper Swans announcing their arrival again, and turned to see a nice big group flying in over the frozen lake. The mountains in the background at Kussharo Lake make it, in my opinion, one of the most beautiful spots on the planet to photograph Whooper Swans.

Conscious of the beauty of the mountains, I stopped my aperture down to f/14 to get the background a little sharper than it would be at f/11 or so. It’s not a huge difference, but it’s visible and a welcome bit of depth of field in this situation. The swans on the left of the frame are a bit too bunched up for my liking, but the mountains here kind of make it a keeper. My other settings were 1/1000 of a second shutter speed at ISO 500 and a 100 mm focal length.

This next shot fifteen minutes later again, at the same location, was a bit of a sight to see. There were three Whooper Swans flying in, in the foreground, and another twelve of them forming a beautiful evenly distributed line in the background (below).

I’ve cropped this down to a 16:9 aspect ratio, to enable the viewer to focus more on the lines of swans, and because I had to zoom into 400mm for this shot, the depth of field got much shallower, even at f/14. Because I’d zoomed in the top of the mountains wasn’t visible either, so it wasn’t so important to keep them in the frame. My shutter speed was still 1/1000 of a second at ISO 640 now.

Seventeen seconds later, the swans forming the distant rank in the previous image were over the mountains filling my frame at 100 mm, so once again the f/14 aperture worked well to give me lots of depth of field for a wider shot, as we can see here (below).

I kind of like this shot, although I’m not a huge fan of the dirty bellies on these swans. They sometimes get dirty like that because the water is very shallow in the thawed pools that they roost in, so the dirt and algae that form on the rocks on the lake bed rubs against them as they sleep. In the past, I’ve seen the swans fly in with small black balls of grit stuck to their undersides, and seeing that in my photos caused quite a strong negative reaction in me. I can just about live with this dirtiness, but I couldn’t even look at the grit shots for some reason.

Later this day, we went back to Sunayu and did another panning session. I’ve shared enough panned swan shots for this season though, so I won’t bore you with another today. The following morning we went back to Sunaya for one last dawn fly-in shoot before we’d start the next leg of our journey. This next image (below) is one of my favorite shots from this morning,  as eleven swans approached the beach relatively nicely spread out, and with the trees in the background.

The piled up snow on the right is a bit of an eyesore, but I still kind of like this, probably because of the contrast between the birds and the trees, and I also like how there is some steam coming up from the band of thawed water along the edge of the lake leading through the frame. My settings for this were f/14 for a 1/1000 of a second exposure at ISO 640, and a focal length of 176mm.

A member of my group asked me about this, so I’d like to add that I am actually zooming out as I shoot this kind of image, to keep the swans framed nicely as they get closer. If I check my EXIF data on this kind of series of images, I see that I’m gradually zooming out making the focal length wider and wider as the birds approach.

OK, so let’s wrap it up there for this week. Next week we’ll continue our journey as we head over to Rausu on the Shiretoko Peninsula, where we’ll photograph the Steller’s Sea Eagles and White-Tailed Eagles, and visit the Notsuke Peninsula to photography the Ezo Deer and Northern Red Fox.

Note that although our 2019 Snow Monkeys & Hokkaido Tours have been sold out for a while now, we are now taking bookings for 2020, so if you think you might like to join us, please take a look at the tour page at https://mbp.ac/ww2020.