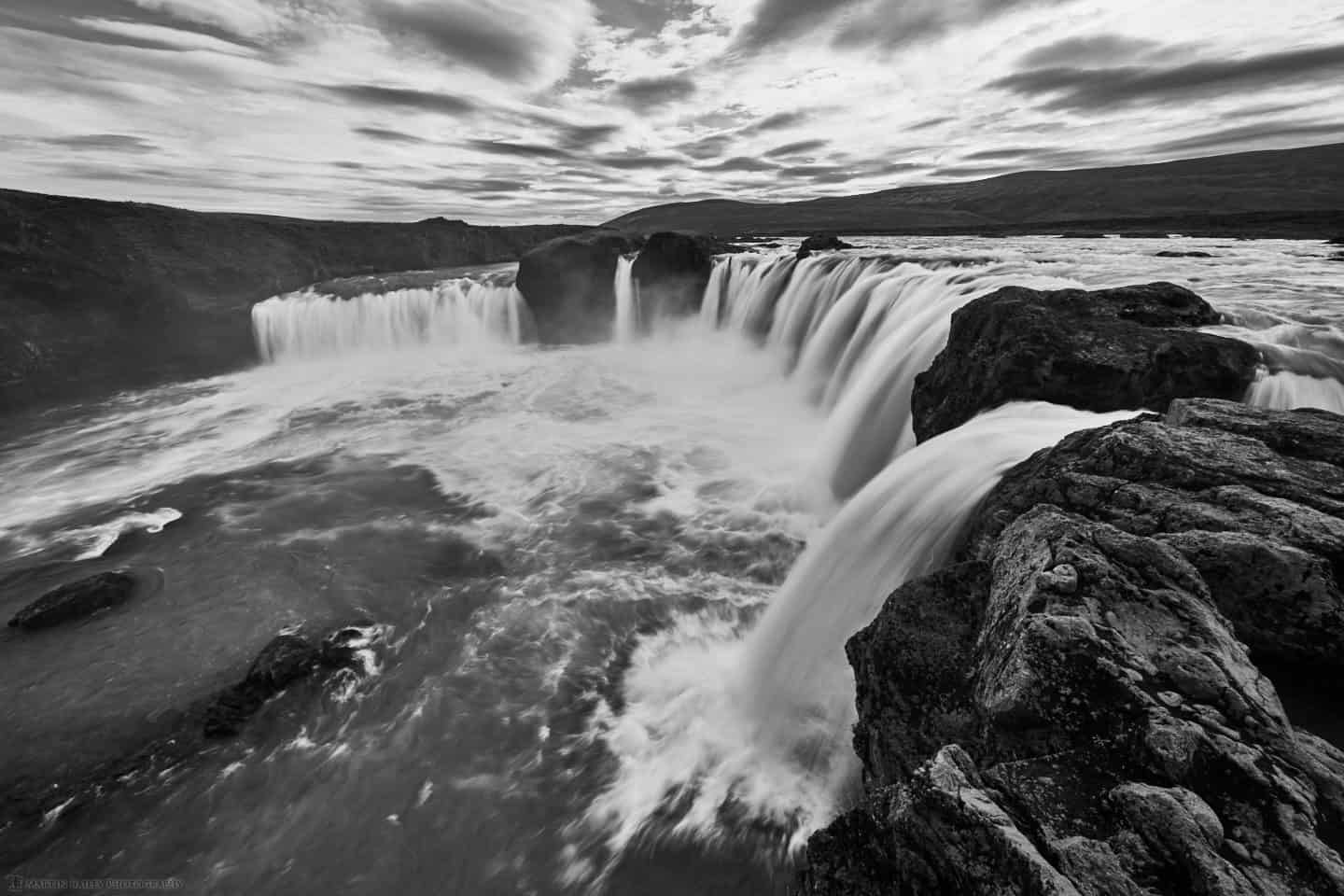 This is the concluding part of our four part series of travelogue style episodes to walk you through the final ten images from my recent Iceland Full Circle Tour and Workshop.

We pick up the trail on Sept 13 (2016) when we walked up from Detifoss to Selfoss. Selfoss doesn’t have the power that Detifoss has, but they’re definitely worth the extra walk once you are nearby. There is a series of falls all along the right side of the river as you can see in this photo (below). 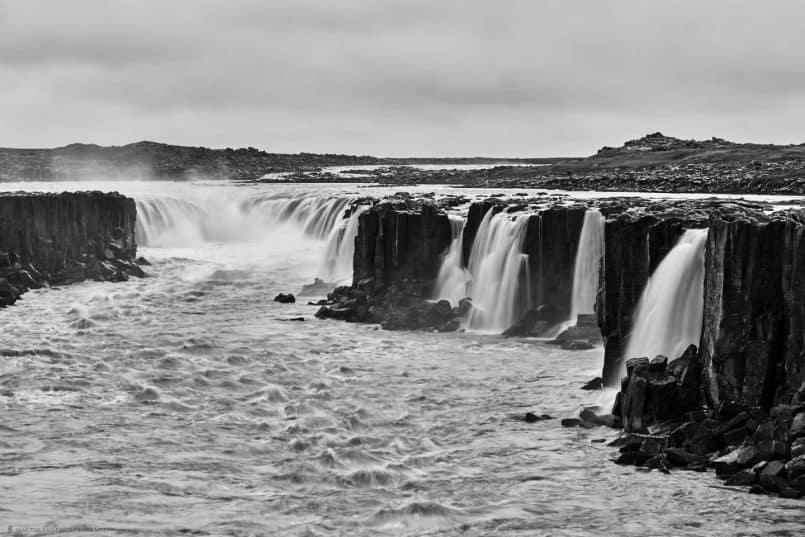 Again, I wish we’d been able to get to the other side of the falls, but it wasn’t to be this year. What I do like about this photo from this angle though, is that pronounced line of waves in the water, almost making an “S” shape from the front of the main falls, first banking left then coming back towards the middle of the frame and out the center of the bottom of the photo. It almost feels like there’s a giant serpent just under the surface of the water.

This was a 0.3 second exposure at f/14, ISO 100 at 100mm, with my 100-400mm lens. I converted to black and white in Capture One Pro. I haven’t used Silver Efex Pro once since I switched to Capture One, and I’m really not missing it. The biggest benefit of course is that I get to keep my images in their original raw format, so I save disk space, and will benefit from upgrades of the processing engine as Phase One upgrade Capture One Pro.

Later in the day, we visited Lake Mývatn, not far from where we were staying for the two days we spent in this area. In true form for Iceland the rain hadn’t really let up for the last few days, so a people decided to stay on the bus but some of us walked down to the lake, to capture some of the beautiful fall color that we can see in this photo (below). 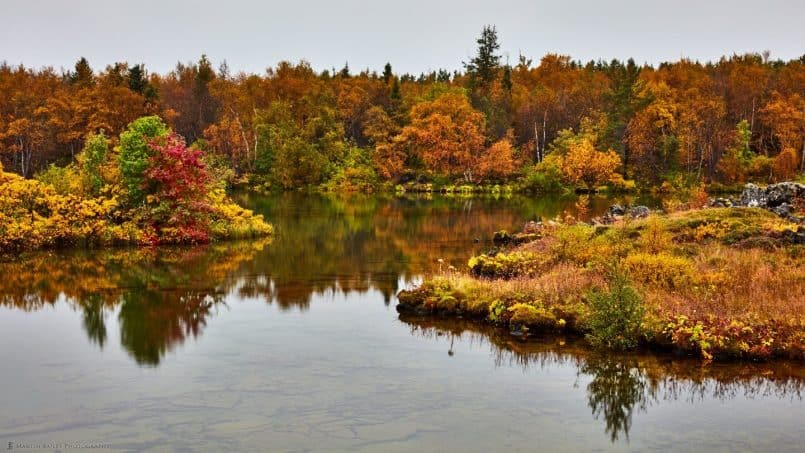 The overall scene would have been nice in the sun, but I think the wet leaves look nice when they’re wet like this too. The colors literally become more “saturated” when wet. It’s not a coincidence that we use the same word to mean both colorful and very wet. I shot this with a 0.6 second exposure at f/14, ISO 100, at 63mm with my 24-70mm lens. If you didn’t catch it, I released a review of the new 24-105mm Mark II lens last week, and that’s what I’ll be working with in the future.

The following morning bright and early we visited Dimmuborgir while the frost was still on the ground, and had a lovely early morning walk with a blue sky that was nice to see for the first time in a few days. I am actually not a fan of blue skies, but if it’s a toss-up between blue sky and constant rain, there comes a point when the blue sky becomes more appealing. 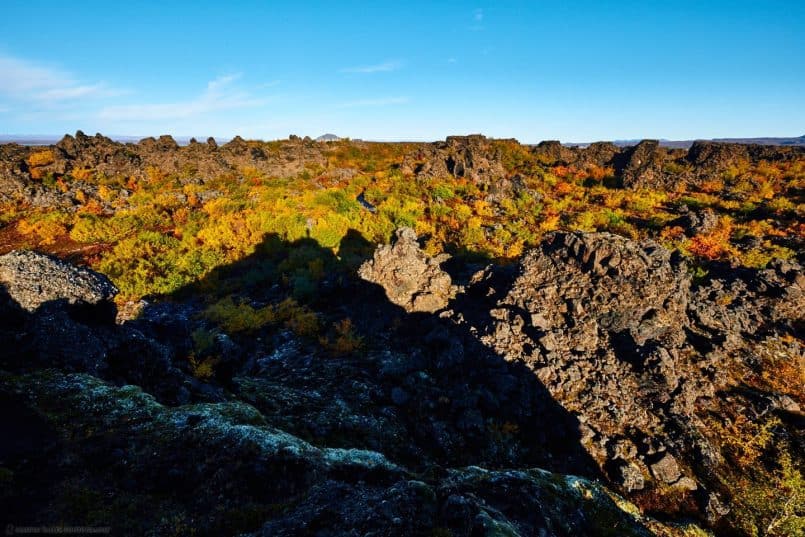 This is more a fun shot than anything, as it’s a selfie of my own shadow. If you look closely, there’s a figure standing on top of that shadow pinnacle. That’s me with my 11-24mm lens shooting this photograph (above). There’s the shadow of another member of my group to the left of me as well. I really enjoyed this shoot, just because it felt so great to be out in the brisk morning air, but the fall color was a nice added bonus.

My settings for this photo were 1/100 of a second at f/16, ISO 400, at 15mm. I had increased my ISO so that I could hand-hold the camera for this shot. There really wasn’t enough room to set up my tripod on top of the rock on which I was standing.

After the morning shoot, we had a long drive up to Asbyrgi, where we took a short walk from the bus to a simply magical lake, that you can see in this photo (below). We had hoped for a windless day for this reflection, and we were lucky enough to get just a slight breeze, so there was only a small amount of rippling on the surface of the water. 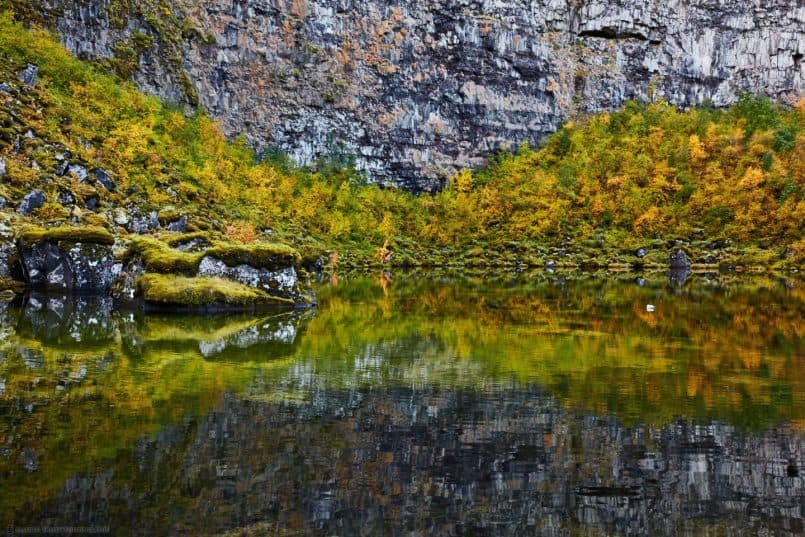 There was that solitary white gull on the lake too, which I thought added a nice additional element. I shot this at f/14 for 1/15 of a second at ISO 400, 38mm. Although I was using a tripod for this, I increased my ISO a bit here for a couple of reasons. Firstly, the gull was moving around, and I didn’t want it to become a streak of white with a longer exposure. Also, we were shooting from a wooden platform on the lake, and people were walking around, so there was always risk of that causing camera shake, so the shorter the exposure the less risk.

If you click on the image and look really closely at this photo, you’ll see a person in a blue coat just above the trees on the right third of the image. After shooting from the platform on the lake for a while, we went up there, and shot this next photo (below) showing the lake and the cliff wall that encompasses it. 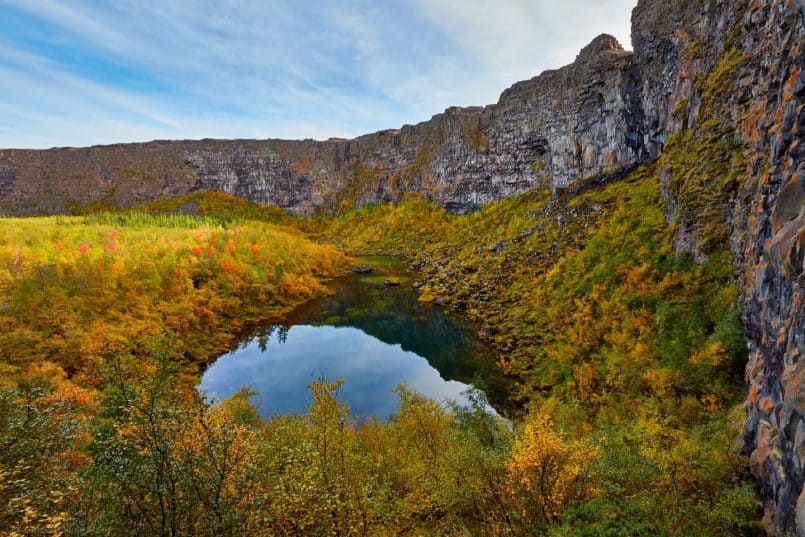 This beautiful fall color is one of the reasons that I plan my tours for September. The other reason is because many of the summer crowds have also started to leave by this time. I love the color in this shot though, from the oranges in the cliff face to the right, through all of those lush greens, yellows and oranges in the foliage. This was a 1/25 of a second exposure at f/14, with a focal length of 16mm. I was on solid ground now, so I’d set my ISO back to 100 and was using a tripod again.

Making the most of the dry weather, after this, we drove to Goðafoss, and I was very excited to see the sky as we approached the falls. As you can see in this photograph (below), parts of the sky looked like a long exposure, without actually doing a long exposure. 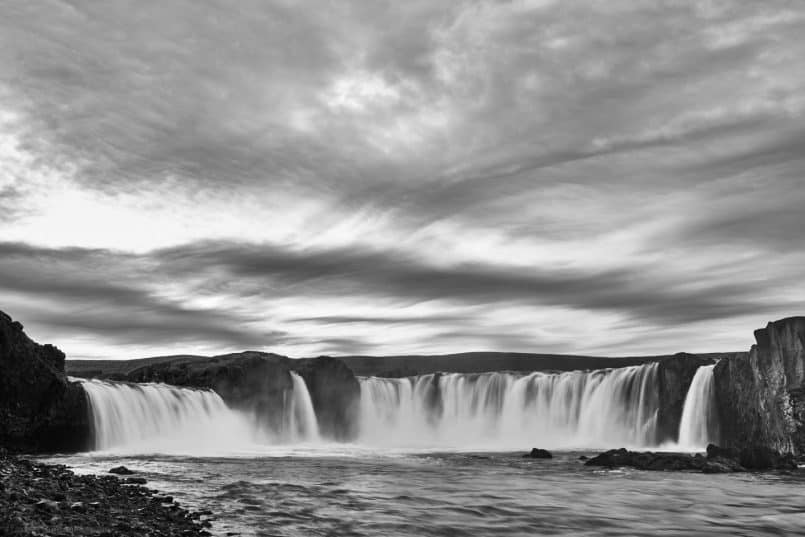 This was actually just a 1/4 of a second exposure at f/16, at 33mm. We had walked down to the river bank for this first image. Again this black and white processing was done in Capture One Pro, and I love the control I have over the tones. In trying to stop the bright parts of the sky from blowing out though, I found that the water in the falls was a little bit too dark, so I brush in a band of Adjustment layer across the falls, and increased the Clarity just for that layer, and this made just the water brighter again.

I did the same with the water in this next shot from the other bank of Goðafoss. Just brushed in some Clarity across the falls and the white water caused by the falls, just to bring some balance back to the image, caused by the sky being so bright in some areas. 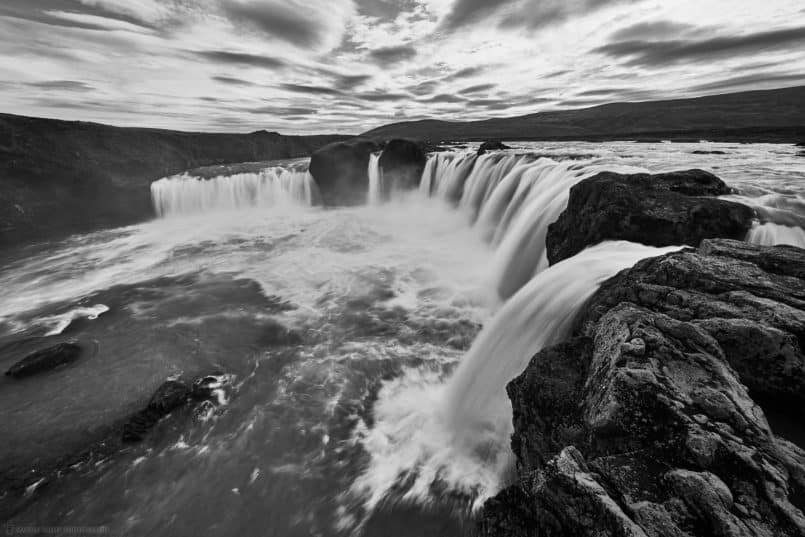 Goðafoss literally means the Waterfall of the Gods, and I can see why. I mentioned earlier in this series that Skogafoss was still my favorite waterfall in Iceland, and Seljalandsfoss another of my favorites. After my first visit to northern Iceland on this tour, Goðafoss has secured a solid place in my my list of favorite Iceland falls. I’d been looking forward to Detifoss more, but because we couldn’t get to the other shore, I was somewhat disappointed by Detifoss. Goðafoss though surpassed my expectations, so I’m really pleased we added this location.

My settings were 1/4 of a second at f/22 at ISO 100, and a focal length of 12mm. You’ll probably recall me saying in previous episodes that I don’t like to go below f/16 because it starts to make the image soft due to diffraction, which is when light that is forced through a small hole spreads out on the other side. Well, as expected, this image is just a little bit soft throughout because of diffraction. I couldn’t bring myself to take this into Canon’s Digital Photo Professional just to apply their digital lens optimizer, so I’m going to live with this, leaving it soft for now. If I print this at some point, I’ll use the lens optimizer to remove the effects of diffraction at that point.

The following day, we had a long drive across what was left of northern Iceland and down the west coast towards Reykjavik. Our last planned stop was for the beautiful waterfalls Barnafoss and Hraunfossar. Here first is Barnafoss, a cascade of glacial meltwater through the rough lava formations (below). 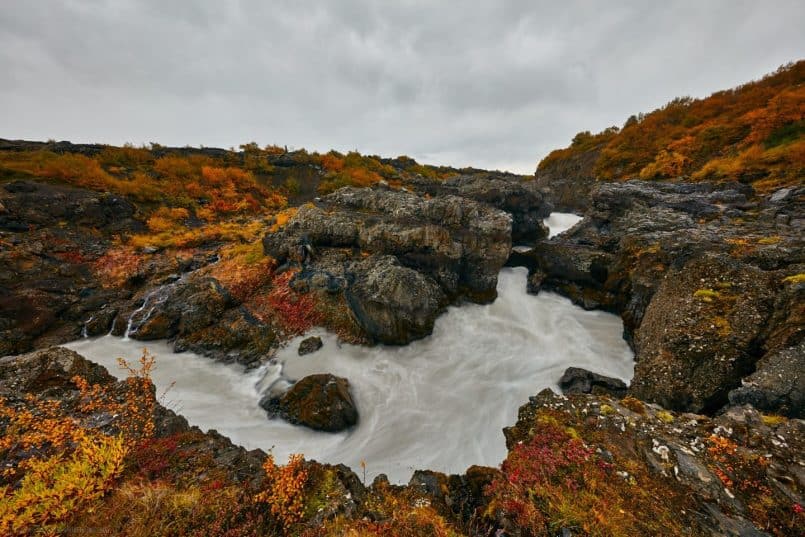 This is similar to the shots from previous years, although I do like the sky in this version, with plenty of texture. The fall color was nice this year too, and I think I went a little wider than usual as well, opening up my 11-24mm lens to 11mm. This is a 1.6 second exposure at f/14, ISO 100. I used the Healing brush in Capture One to remove a number of people along the top of the rock on the left side of this photo.

Just down from this point are the beautiful cascades of Hraunfossar, that we can see in this photo (below). I’ve not really shot this angle before, but I quite like this, with the actual horizon of the land at the top of the frame, showing the falls in context of their surroundings. 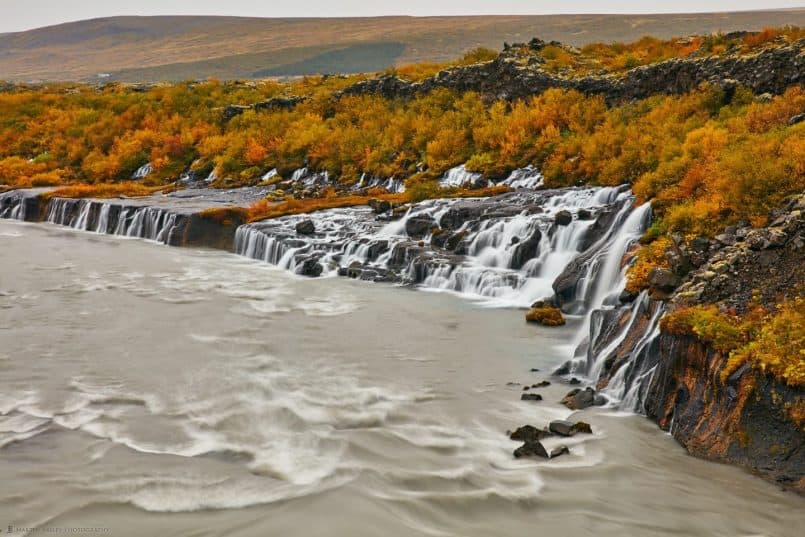 I shot this with the same settings as the previous image, 1.6s at f/14, ISO 100, but I used my 24-70mm lens for this, at 63mm, so not as wide. I love the silky feel of the water in these falls at 1.6 seconds. It’s a bit long for some waterfall shots, but I think it suits these falls, and the longer shutter speed also helps to make the water of the river smoother as well.

Just outside of Reykjavik, we made a brief stop to photograph these horses that we see in this last photograph for this travelogue series (below). This was a lovely moment as two of the horses touched heads, looking like they were sharing a tender moment. 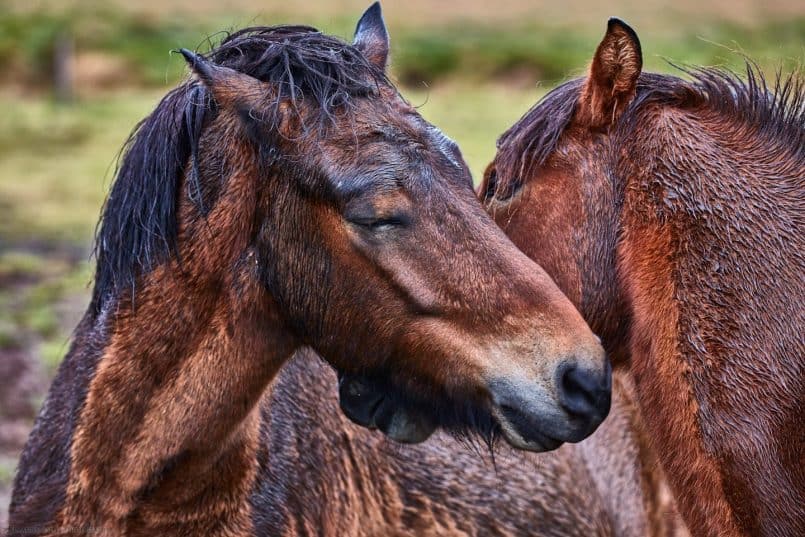 I really like horses when it’s raining, with their matted hair and manes. I had put my 100-400mm lens on and shot this at 182mm. Because of the long focal length, I increased the ISO to 800 and the shutter speed to 1/320 of a second at f/5.6. I wanted the wide aperture to force the background to go out of focus a little.

As usual, at the end of the tour, I took a digital recorder around the bus and recorded a comment from each of the participants, which I’ll play you now.

[Listen to the audio with the player above to hear what everyone said.]

So, that brings us to the end of my 2016 Iceland Travelogue series. I hope you’ve enjoyed tagging along vicariously over these four episodes. I love doing these Iceland tours, and can’t wait to get back there again next year.

If you think you might like to join us for the 2017 Iceland Full Circle Tour & Workshop, from September 4 to the 15th, please do check out the details at mbp.ac/iceland. As you see, we visit some amazing locations, and have a great time. 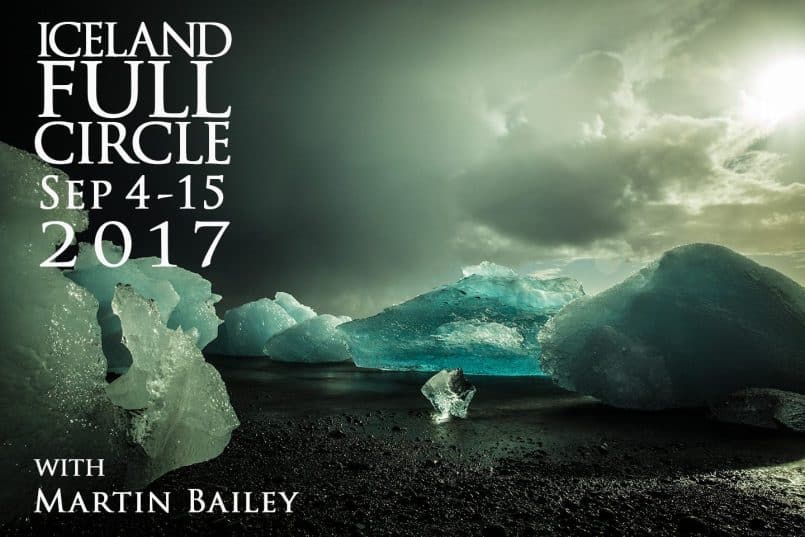