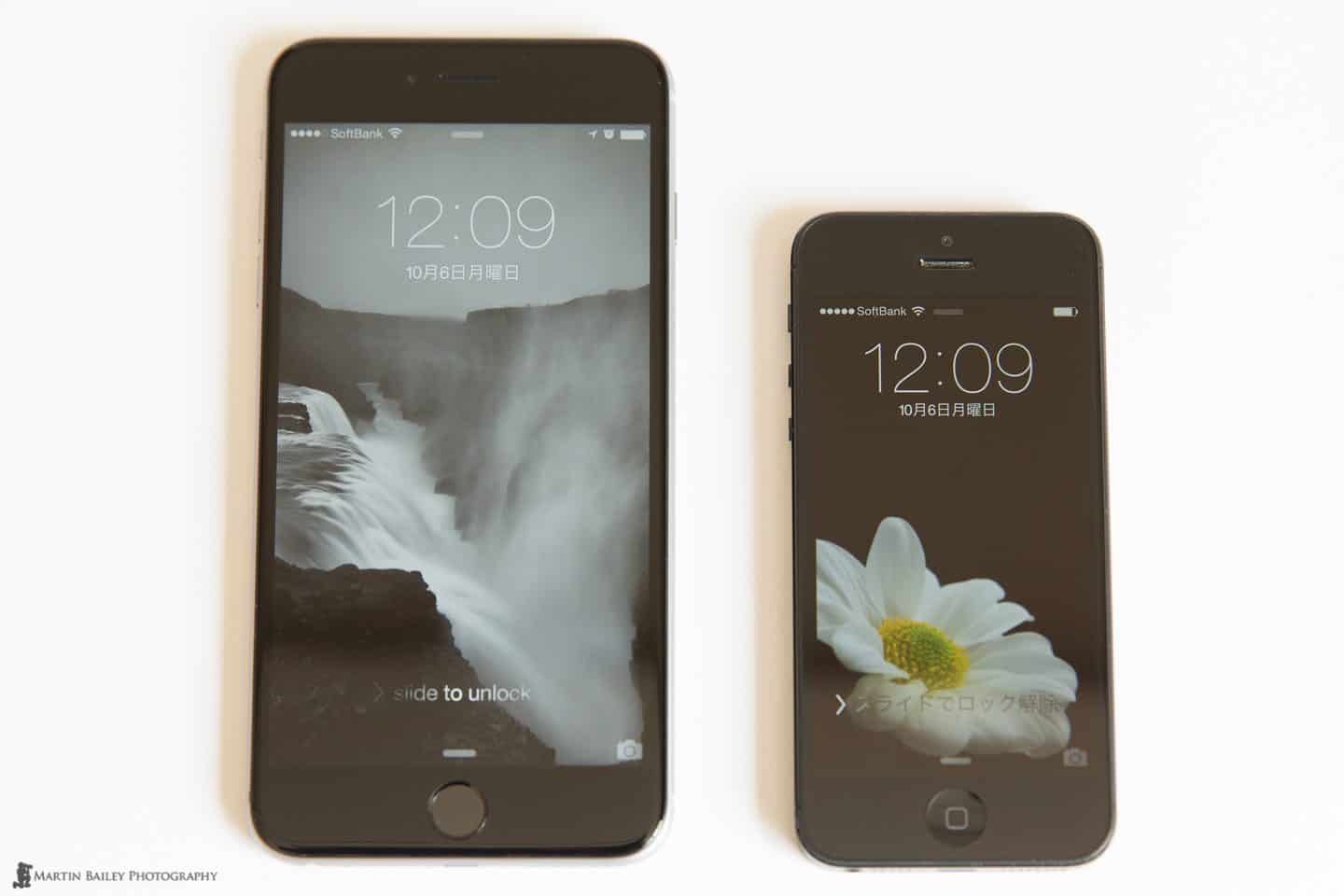 The iPhone 6 Plus – Thoughts from Iceland (Podcast 441)

Two days before I left for my 2014 Iceland Tour, I picked up my shiny new iPhone 6 Plus, and have used it for panos, video and photo sharing etc. over the last two weeks, so this week I share my thoughts on the iPhone 6 Plus from 2 weeks in Iceland.

This year’s Iceland Tour & Workshop was absolutely amazing, again. The group was incredibly talented and fun to travel with, and my experience was enhanced somewhat by the bigger and better iPhone 6 Plus that I took possession of the day it went on sale, just two days before I jumped on a plane here in Tokyo, and headed across the globe to the wild and wonderful island of Iceland.

I’ll start my travelogue series next week, and work you through the tour with images from each day, and concentrate more on the photography aspect, but as I still need a few days to complete my final selection of images, I figured it would be a good chance to update you on the new iPhone. I’m not going to dig deep into specs and technical details as I would a normal camera, because that’s not how I use my iPhone, but from a consumer perspective, here’s what I found.

First of all, one of the questions I’ve received the most so far is why did I go for the larger screen iPhone 6 Plus? The first and foremost reason for this was so that I can view and show my images much larger and more beautifully with this larger screen. I also like to read on my iPhone, especially when traveling, and the new large 5.5 inch screen makes this much more comfortable.

To put things into perspective, here’s a photo of my old iPhone 5 with its 4 inch screen, which was a nice increase over my older iPhone 4, but as other companies released smart phones with larger screens, Apple seemed to get left behind. The wait was worth it though, as in true Apple style, the new iPhone 6 is beautifully designed, and now comes in two larger screen sizes. The 4.7 inch screen, and the Plus that we can see on the left (below) has a lovely big 5.5 inch screen. 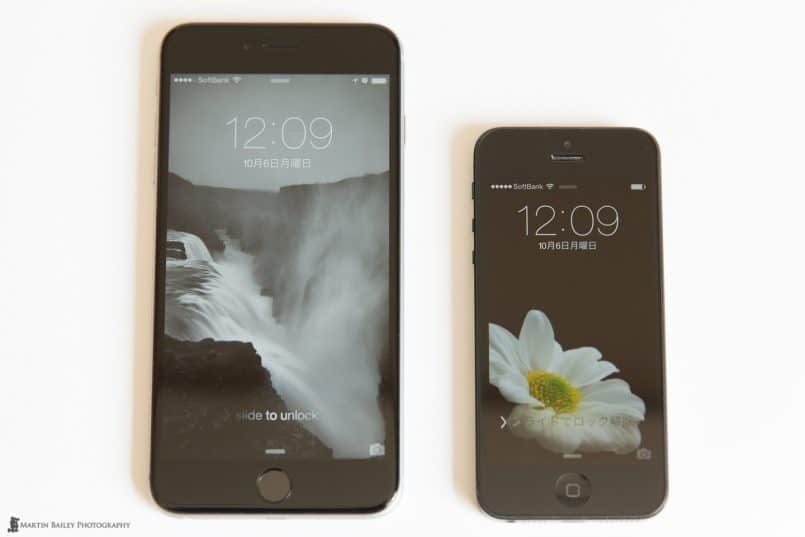 iPhone 6 Plus with iPhone 5

To be totally honest, I was a little bit apprehensive when I ordered the larger screen Plus, especially without actually holding one beforehand, but any of you that have been listening for a while will know that one of my Mum’s famous mottos was “If you’re gonna ‘ave one, ‘ave a biggun!” meaning a “big one” of course. I’ve kind of lived that mantra most of my life, in various interpretations, and it’s always worked out good for me.

This time too, there was no reason to worry. I simply love the big screen, and the iPhone 6 Plus fits surprisingly comfortably in the front pocket of my jeans or jacket pocket. I’ve heard of people bending theirs by putting them in their jeans back pocket, but I have never put my phone in my back pocket, and never will, just out of habit, so this isn’t something that concerns me.

Lightroom Mobile on the iPhone 6 Plus 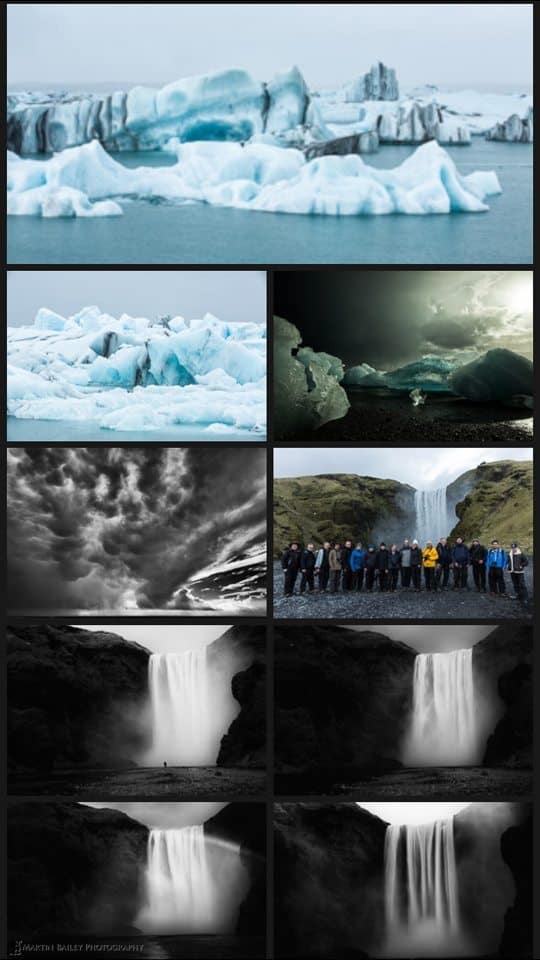 As I said, one of the main reasons I wanted the larger screen was to show photos bigger and better than was ever possible with the smaller iPhone screens. Don’t get me wrong, when that is all I had, I was happy enough with it. People just tend to bring the phone closer to their face with the smaller screen, but the iPhone 6 Plus just takes the image viewing experience to a whole new level.

Before I left Japan for Iceland, I double checked that all of my portfolios were synched to the new iPhone in Ligthroom Mobile, as I’d restored a backup on my old phone. They were all there, no problem.

I created a new collection called Iceland 2014 in Lightroom on my Mac and set it to sync with Lightroom Mobile. Then as I shot new images that I liked during the tour, I just added them to this collection with the B key on my keyboard, because I’d made it the Target Collection.

Then whenever I had wifi at a hotel, the collection would sync with my iPhone, and I could show my photos as I went along.

Because I also set up Lightroom Mobile on my wife’s iPhone, she was also able to see my new photos as I made them, because they automatically synched as I added images to the Iceland collection.

I know there are other ways to sync photos between computers, but this also enables me to browse the photos and change ratings etc. while traveling, and I can also check shooting settings from older photos to give advice to the group as we arrive at new locations, so Lightroom Mobile really works for me in this situation.

One of the other reasons I went for the Plus over the standard iPhone 6, was the optical image stabilization for the camera in the Plus model. I don’t really do much shooting with my iPhone,  but I use it like many consumers probably do, to capture memories, more like snapshots than the photos that I shoot with my digital SLR cameras.

Actually, while I’m out with my iPhone and my DSLR, I tend to use the iPhone to shoot panoramas more than anything else. Here (below) we can see a panorama that I shot with the iPhone 6 Plus up in the highlands of Iceland. This is straight out of the camera, and I think pretty good for a camera phone. There are a couple of flare spots below the sun, but I am shooting straight into the sun at that point.

Sometimes as you pan across the scene to make this kind of image, if people or objects are moving, the rolling shutter can cause them to become a little bit deformed, like these few people that I circled in this shot. You can see that the one in the middle has a bit of a pin-head, and Henry there in the blue jacket is a slim guy, but isn’t quite that flat. (Click on the images to view larger and see more detail.)

Of course, these are JPEGs, and can be quite heavily compressed, causing digital artifacts and nasty blotchiness as in parts of this photo. The water I can understand more, but the sky was stationary, so I would have hoped to see slightly less blotchiness up there, but hey, it’s a phone camera, right? (Again, click to view large to check out the details.) 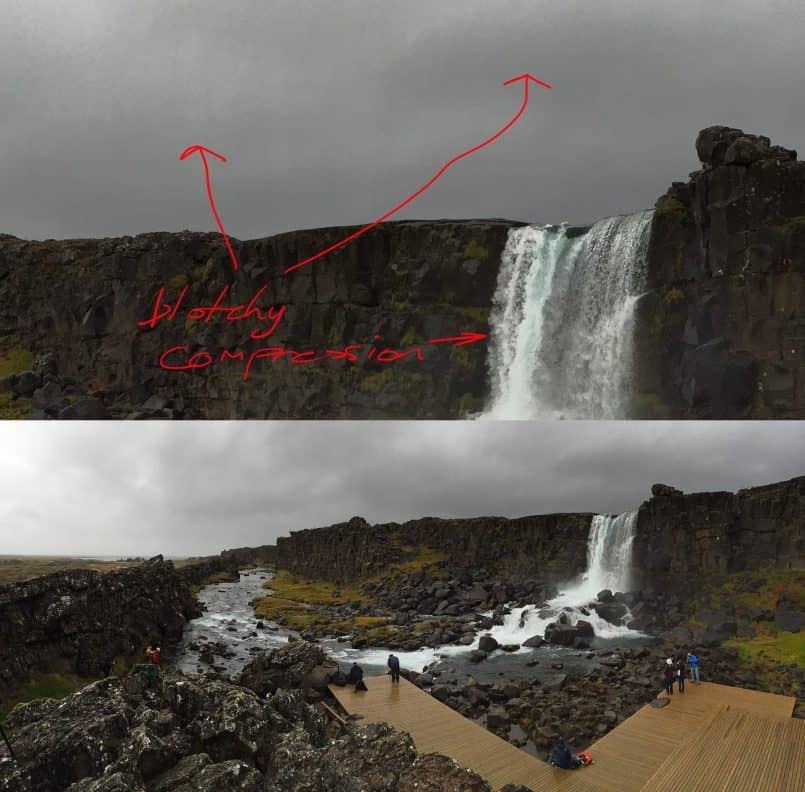 All in all, the camera probably outperformed my expectations. It’s saves standard photos at 8 megapixels, and panoramas up to 43 megapixels, which is a hefty size and could easily be printed very large if you get a shot that deserves to be printed.

The other thing that I found myself doing a lot was shooting video, which is really pretty good with the new optical image stabilization, except for issues that occur when there is a lot of movement. To show you what I mean, both good and bad, I’ve put together a quick video of iPhone 6 Plus video clips from the tour for you to take a look. Keep an eye out for the rare beautiful blue sky day when I shot a little from the moving bus. You’ll see the entire scene kind of morphing as the camera tries to keep up with this much movement.

I haven’t really played with the Slo-mo video yet, although that looks like fun. I did shoot some of my video at 60 frames per second, but turned that off when I didn’t need it, because I figured that could be what was causing the video to shudder when there was a lot of movement.

Just a Couple of Issues

There are a few things that I’ve not been totally happy with, so I thought I’d mention this before we close. The first one was that as my hands dried up from the cold in Iceland, my fingerprints must have changed or something, because I found that Touch ID stopped working within just a few days. I rescanned my fingers, and it worked again for a few scans, but then stopped working again.

I found myself tapping in my security code 99% of the time, and even now that I’m home, because it will take my hands a week or so to get back to normal, I still can’t use my fingerprints for the Touch ID. It worked fine for the few days before I went to Iceland so I know it’s the cold and my skin that has caused the issue, but I didn’t think it would be this bad.

I also am not a huge fan just yet of the on/off switch on the right side of the phone. At first it feels ergonomically better to have the switch on the side, especially now with the bigger phone, meaning that you’d have to change your grip to push a button on the top of the phone as before, but I often hit the on/off switch after I’ve put the phone down on a surface, and find myself pressing the volume buttons on the left side of the phone as I grip it to turn the screen off. This isn’t a big problem, and I’m sure I’ll get used to it, but I can’t help wondering if this couldn’t have been designed a little better.

That is absolutely all that I can think of that isn’t absolutely perfect. Everything else just works. I can’t say I can see any noticeable increase in speed from the 64 bit iOS and faster processor, but then I was never unhappy with my iPhone 5. I don’t play a lot of games, except for collecting cars in CSR Racing, and although that looks beautiful on the larger screen, I probably just don’t have a good baseline for comparison of speedy graphics etc.

OK, so that’s really all I have time for this week, as I get back into things after my Tour. I am generally very impressed with the iPhone 6 Plus, and I’m very happy with the large screen. Yes, it’s a much bulkier phone than before, but the look on peoples’ faces as they view my photos on that large screen is priceless, and the user experience is much better in my opinion.

There are lots of things that have been added, like horizontal views for the Mail and Calendar apps etc. but I’m sure other people will be talking about this stuff in good time, and there’s plenty of information about all the new shiny features on Apple too, so I’ll just keep this to my photography related experiences.

Before we finish, I did want to mention once again that we’ll be getting into my Iceland Travelogue episodes from next week for a while, so stay tuned for that. Also note that I have now set the dates for the 2015 Tour & Workshop, so do check that out if you are interested in joining us. It really is an amazing tour that you will absolutely love! 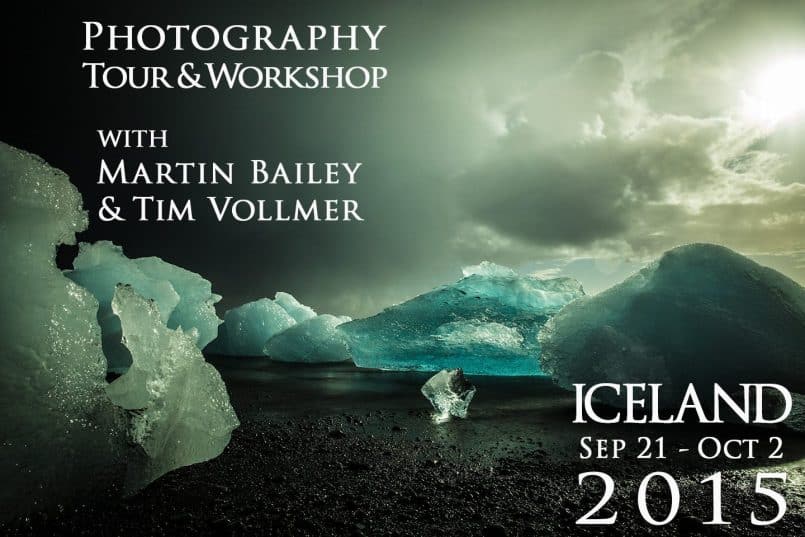 Something Big is Coming!

Also, note that something big is coming on October 15! I can’t share any details yet, but if you love photography, you’ll love this. Take a look at https://mbp.ac/5dd 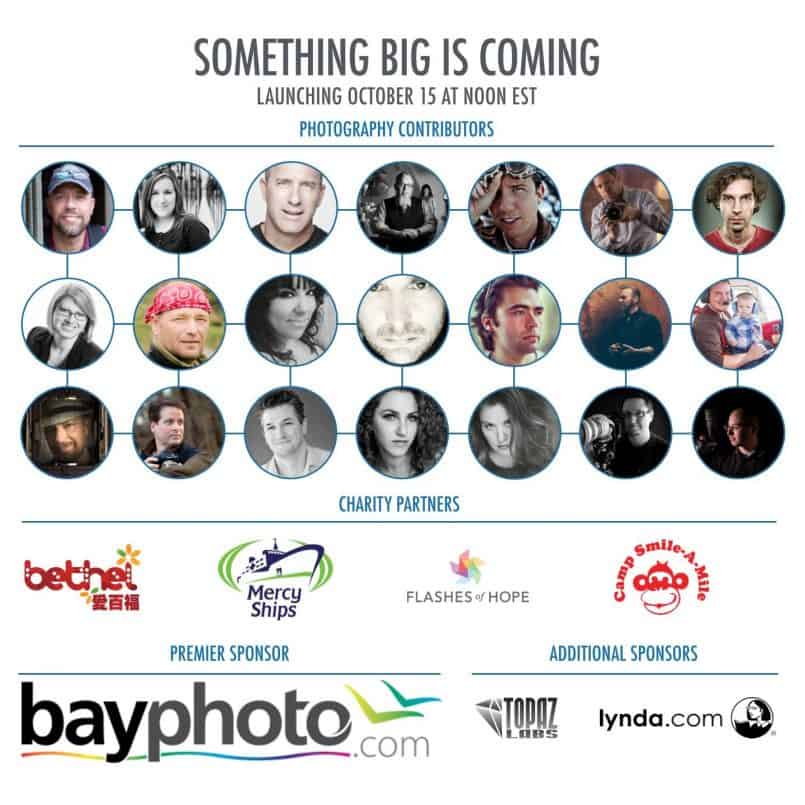