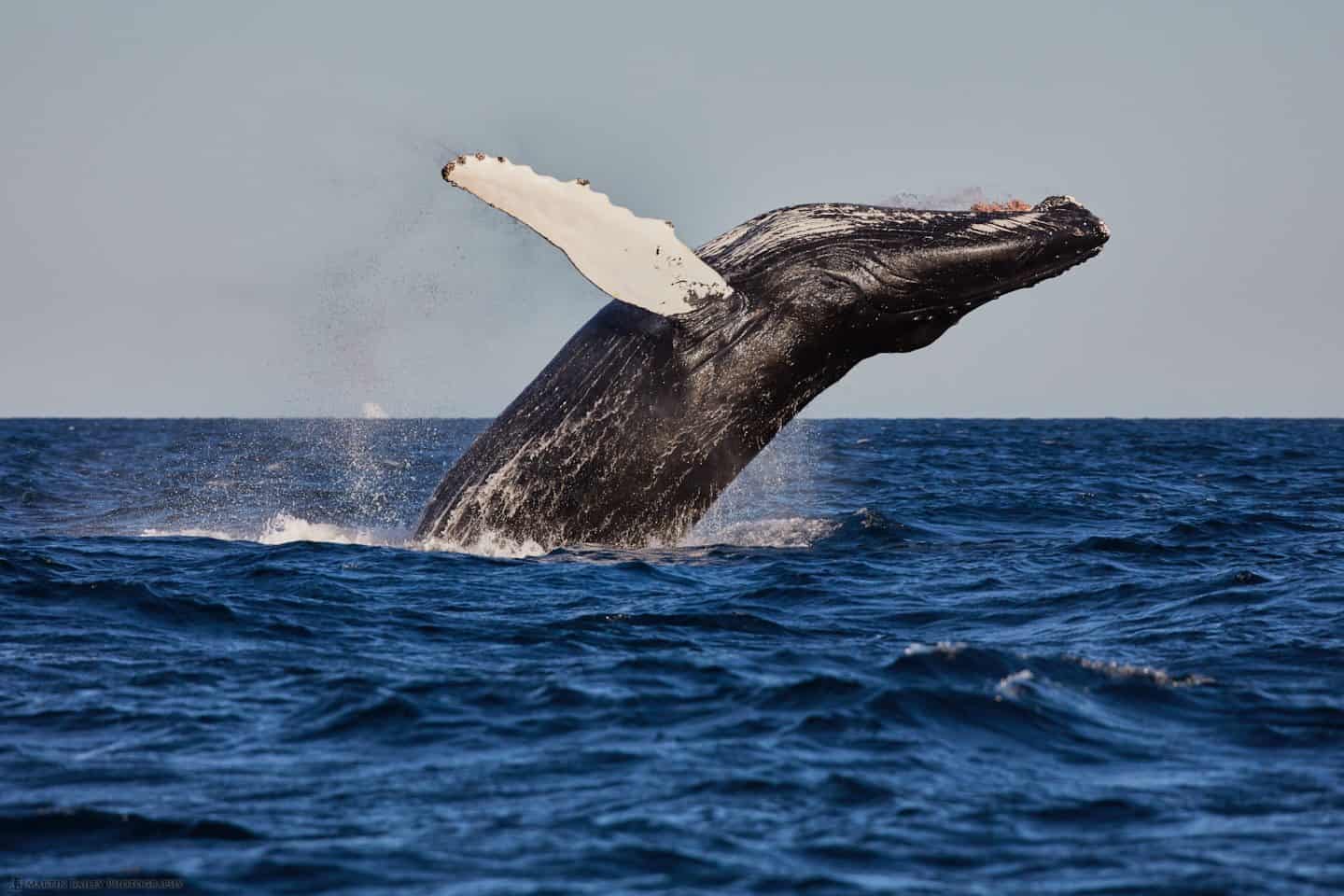 Welcome to part three of a four part series to share my experiences and ten more images from my recent East Greenland photography adventure, including some breaching whale photos!

I’m now back in Tokyo having completed my Iceland Full Circle Tour with a great group, and I’ll be reporting on that and share some Iceland work with you in a couple of weeks. Today we’re going to continue this Greenland series, picking up the trail on the morning of August 29.

Shortly after leaving Tasiilaq, we encountered a number of humpback whales, and I shot this photo of the fluke as one of them dived (below). I always enjoy encounters with whales. It never ceases to amaze me how they let us get so close, like this. 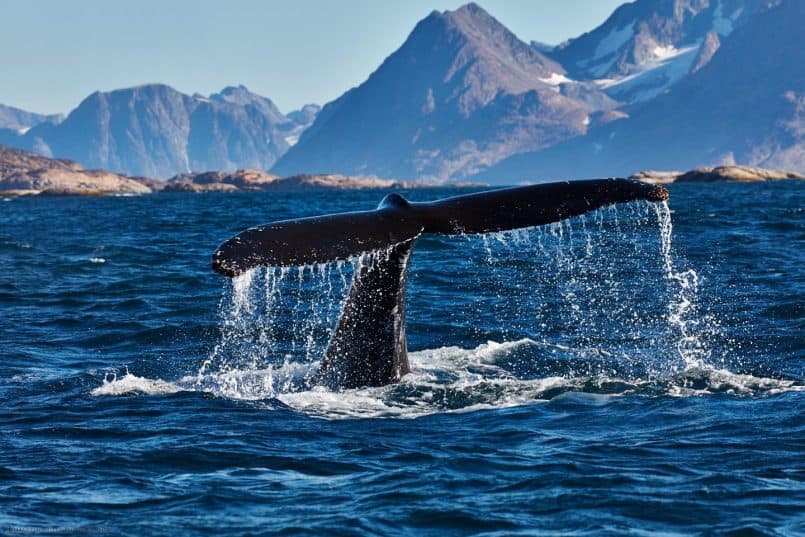 I shot this at 234mm with my 100-400mm lens, and it’s uncropped so you can appreciate how close we get. If we were simply whale watching, we could actually get closer, and our speed boat drivers often tried to, but we need to keep a little more distance than they can get so that we get a nice background in the shot as well.

After this encounter, we continued on a long sail to a remote settlement known as Tiilerilaaq, as you can see in this photograph as we approached the town (below). It took us about 3 hours to get to Tiilerilaaq, including a few stops for the whales of course. 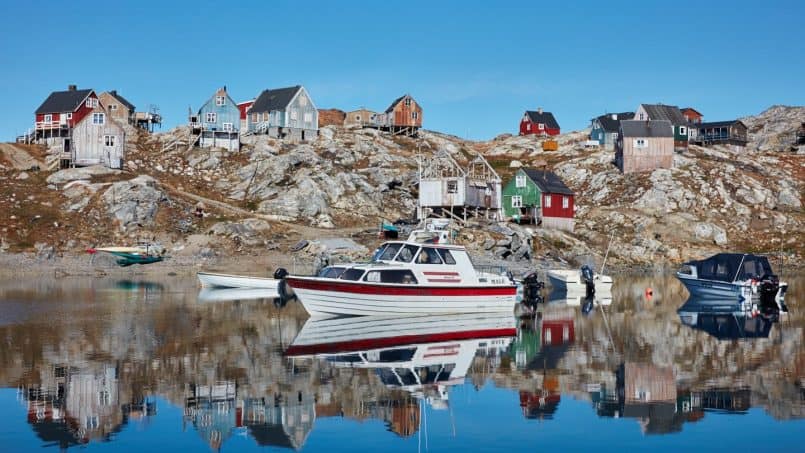 To get there we headed east out of Tasiilaq, then north-east up and traveled around one third of the way up the Ammassalik Fjord, then north-west along the Ikasagtivaq channel. At the end of the channel, we dog-leg left along a short channel to the settlement.

It was almost disappointing to see such modern boats moored here, but as you can imagine, these boats are very important to the Inuit people, so they tend push the boat out a bit when deciding on their rides (pardon the pun).

We climbed up onto the quay, and made lunch on a few palettes that were stacked there, then took a while to walk around the town. At about the farthest point we could walk, this house was surrounded by grass and the cotton grass, Eriophorum, which is found most commonly on Arctic tundra. 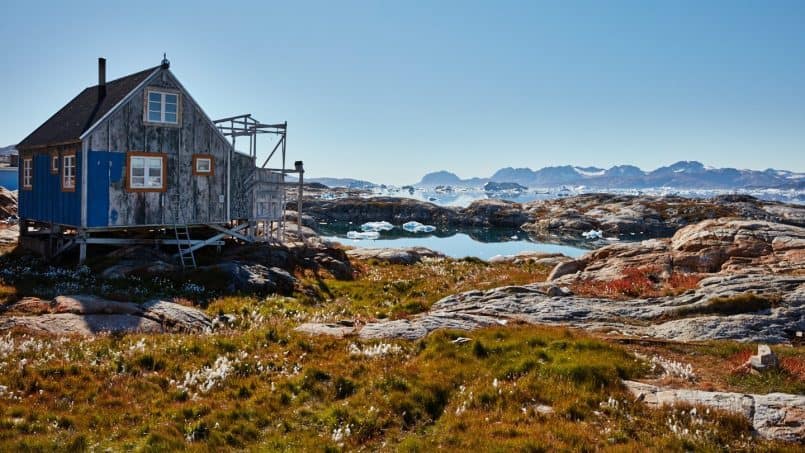 The foliage in Greenland seems to almost have a sense of urgency about it, trying to cram all that it needs to do into just the few short months of summer, before the harsh winter sets in again.

In the distance in this photograph, you can see the Sermilik Fjord which we’d sailed down earlier in the trip, and we continued to access through the tiny passage in the middle of this image shortly after I shot this. We of course took this opportunity to shoot more of the amazing icebergs, although we tended to be a little more particular now that we’d seen and photographed so many.

One thing that we like to do is to find icebergs with arches, such as the one in this image, and then try to find some supporting actors, like the berg that you can see in the distance through the arch, and the foreground berg, with much of its blue underwater portion visible (below). 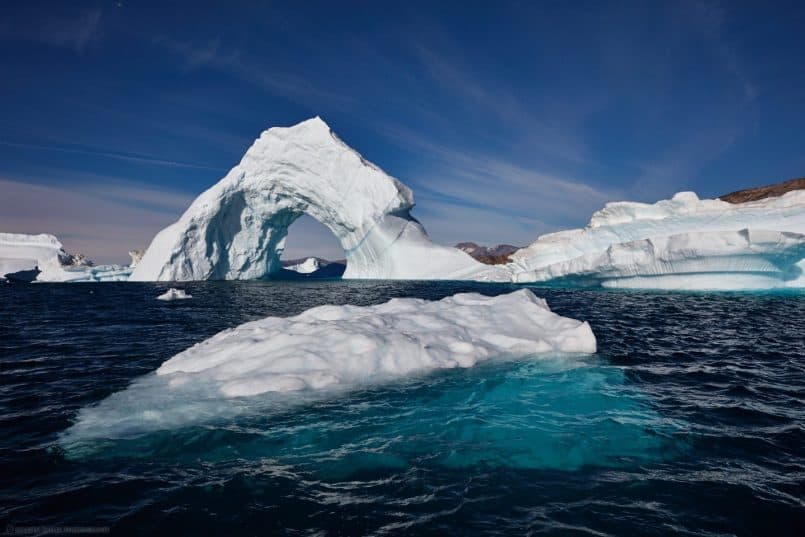 This was near a tiny island called Takiseq, around a third of the distance that we’d travel down the Sermilik Fjord. Just along from here we also encountered the jagged iceberg that you can see in this next image (below). 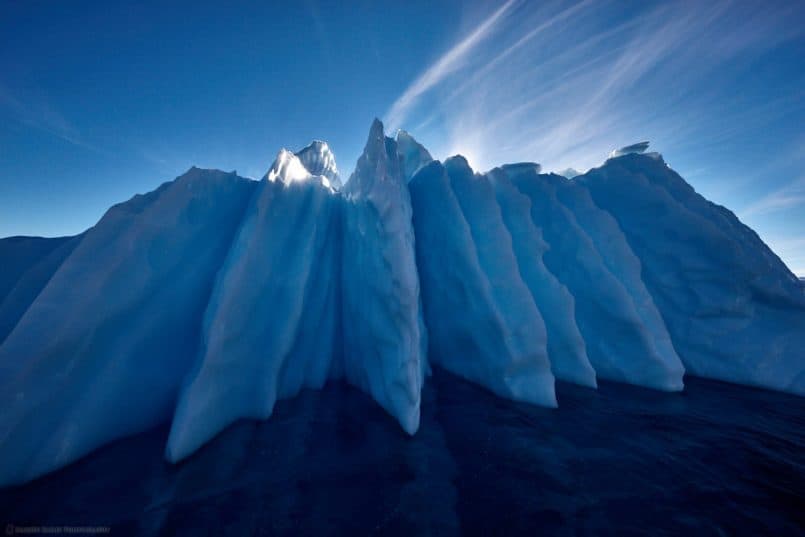 We’d been shooting sunburst images with the sun just above the berg, but here I actually like the sky and the flare caused by the sun instead of the sunburst, and there is a bit of a sunburst in the reflection just left of center here, that I also find quite appealing.

We continued to photograph the icebergs as we made our way down the fjord into open ocean, and started heading back towards Tasiilaq, when we had one of the most magical experiences of my life so far. We’d seen whales on this stretch of water a number of times so far, but at the end of this day, we saw them breaching in the distance, and tension on our boat instantly raised as we initially started to speed towards them, seeing two breach at the same time.

Then, our speed boat driver stopped, and let us know that the whales were coming towards us, and that we should just wait for them to swim past. Despite the whales being so far away when we first spotted them, in just a minute or so, they were close enough to the boat for me to capture this photograph (below) as one of them breached heading straight for us. 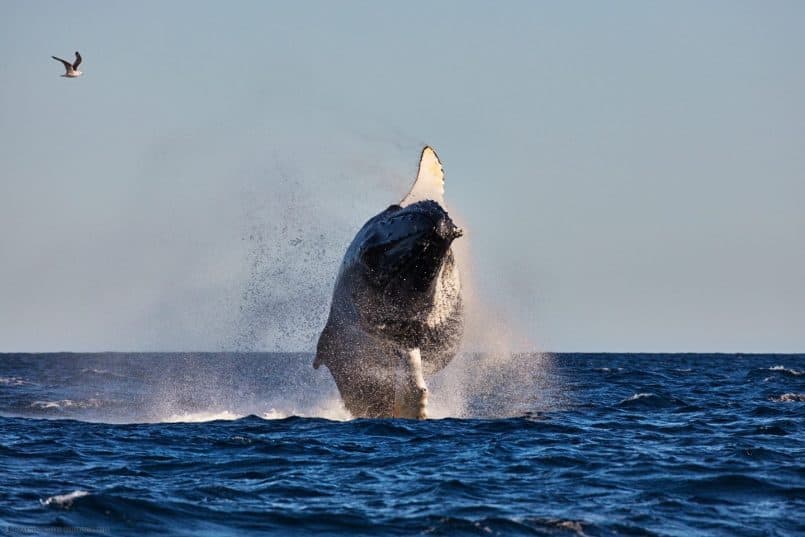 This is cropped slightly, and also rotated a little to straighten the horizon, but pretty much a full 50 megapixel photo, so I was incredibly happy to have captured this shot. We also have a cameo appearance from the seagull, kind of mirroring the flight of one of the largest mammals on the planet.

Just 38 second later, the whales were beside our boat, and I shot this image, of another humpback whale from this side this time (below). This is un-cropped, though rotated slightly to straighten the horizon, so the detail in this image is incredible. 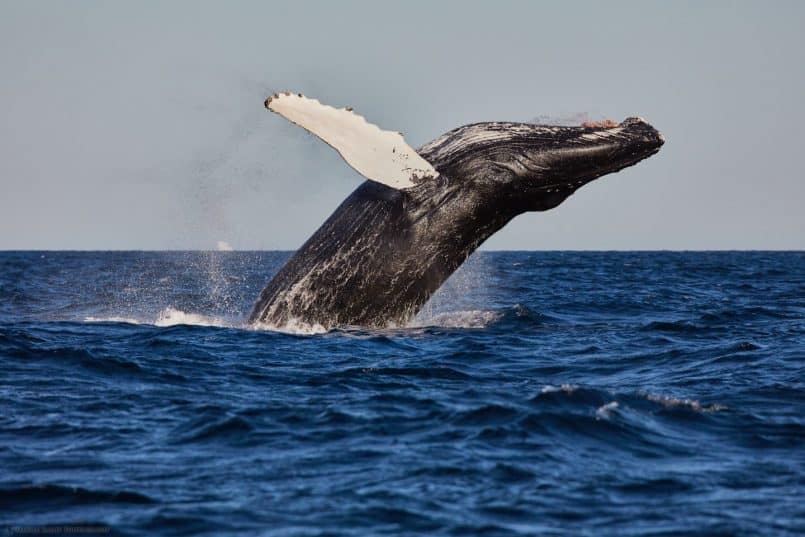 I have some photos of the splash that follows these jumps, although as photos, they don’t mean much, because you can’t see the cause, but the splash that these huge animals make as they reenter the water was also an incredible sight to see. I have a few other shots of the breaching, but these two are my favorites, and I was absolutely over the moon to have not only witnessed this, but to have be able to capture a number of quality images as well.

The mental image of the two that breached together will haunt me for years to come, but I have no complaints with what I did capture. I recall spending hours in a Zodiac the Lemaire Channel in Antarctica in 2011, waiting and hoping to see, and maybe photograph, a whale breaching, then just as we had to leave to go back to the ship, our Zodiac driver told us that he’d just seen one breach behind us. This old ghost was exorcised by these new photographs. I guess now I just have to hope that one day I’ll capture a breaching pair to exorcise my new ghosts as well.

Before we move on, I’d also like to remind you of how happy I am with the performance of the Canon EOS 5Ds R cameras. Coupled with the 100-400mm Mark II lens in this case, the autofocus snapped straight on to these whales as they appeared from the water. If you keep in mind that we have no idea where they are going to pop-up as they breach like this, you can probably appreciate how difficult it could be to frame them quickly and achieve focus, but it was not a problem at all, for me at least.

So, when people try to pigeon hole the 5Ds as a landscape and still life camera, just point them to my Web site, and together we can hopefully continue to explode these myths, spread by people that are trying to find reasons not want this camera. If you don’t want or need the resolution, of course the new Canon EOS 5D Mark IV is in many ways now a better camera, but I do wish people would just buy what they want and be happy with it, rather than putting down all other gear that they don’t want, in a strange war dance to protect their fragile egos.

The following day, we had a day off from the speed boats, and had a walk around Tasiilaq in the morning, then in the afternoon, another professional photographer that had been tagging along with us, and I, chartered a helicopter, on the understanding that we would be able to open the windows to shoot the landscape from the air.

I was initially going to only take one camera, with my 24-70mm lens on it, but before we left the hotel, I decide to also take my 100-400mm on a second 5Ds R, and I also slipped my 11-24mm lens into my vest pocket. We took off from the heliport in Tasiilaq and before we knew it, we’d flown over the mountains north-west of the town, and were flying over the Sermilak Fjord. This takes a couple of hours to get to buy boat, so it was surprising how quickly we got above this area.

This first aerial photograph that I want to share (below) is of an iceberg that we saw, with that amazing blue pool, almost looking like the eye of a fish, or a huge island, with a second island to the bottom right. 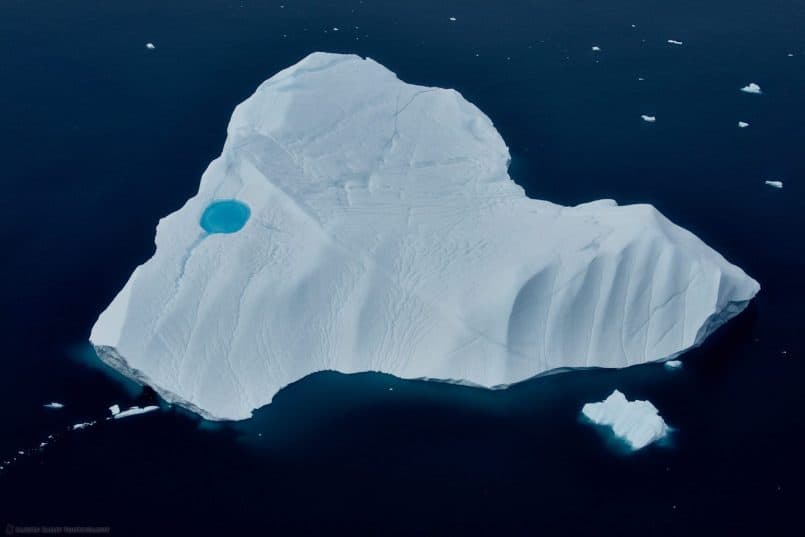 If you look carefully, you can just see the base of this iceberg receding into the water, but I have some other shots where the base is much brighter and more prominent, and I’ll share one of those with you in the concluding episode of this series next week.

Moments later, we were over the Hann Glacier, which we’d also sailed to earlier. We had moored on the little outcrop of land that you can see towards the bottom left corner of this image (below). The slot canyon style photo that I shared with you last week was from this location. 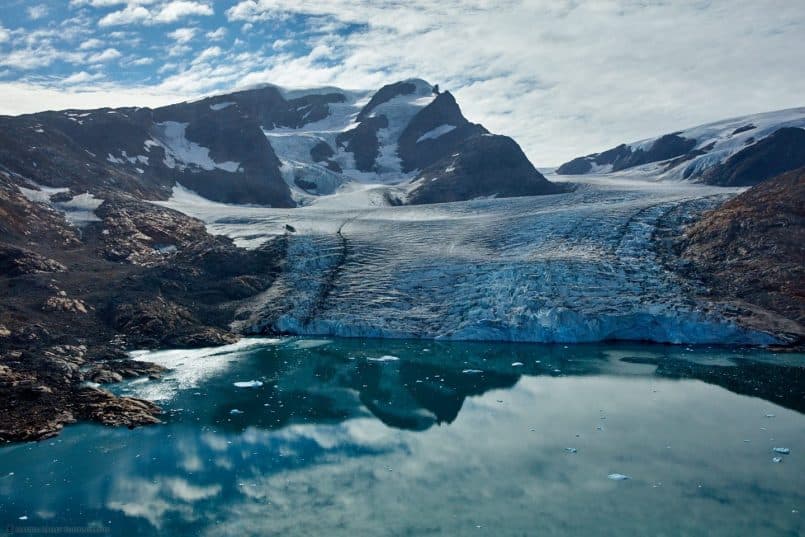 I had actually not liked any of the shots of the glacier itself from our previous visit, but seeing it from above like this gave a whole new look, and enabled me to put things into perfective, although I’ll share some shots next week of the main glacier that covers the huge expanse of the Greenland mainland.

We continued on and landed our helicopter across from the Heim Glacier, and had a quick walk down to the rocky shore, as you can see in this photograph (below). To the right of the Heim Glacier you can also see strands of the Kagtilersorpia Glacier. 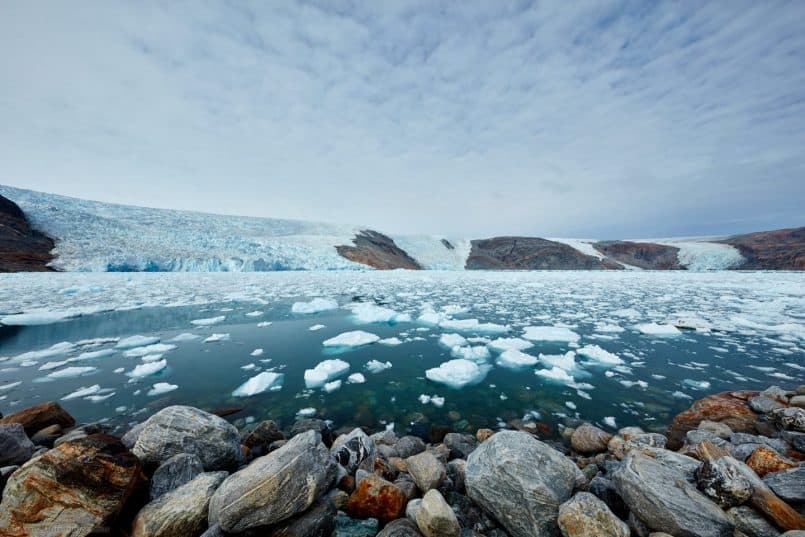 The Heim and Kagtilerscorpia Glaciers

I switched to my 11-24mm lens for this image, and shot this wide open at 11mm. This not only helps to show the expanse of the landscape, but gives the impression that all of the rocks on the beach are pointing inwards, and the same goes for the chunks of ice in the water, and the sky. They all seem to be pointing towards a central vanishing point, and I really like this look.

Shooting from a Helicopter

Before we wrap up, I just wanted to mention a tip for shooting from a helicopter, based on this experience. Just as I had been shooting at around a 1/500 of a second shutter speed to overcome the vibration and movement of our speed boat while on the water, in a helicopter there is much more vibration to overcome.

Because of this, I kept my shutter speed as high as possible for the aerial shots. I increased my ISO to 800, and shot between 1/1600 and 1/3200 of a second while in the air. The shots came out great, with no blurred images, despite hand-holding a 50 megapixel camera. I was very happy with the results, which was a relief, when you consider that this little excursion cost me about $900, but it was worth every penny.

We’ll continue to look at four more aerial photographs from this flight in the next episode, along with some Aurora shots among other things to wrap up this series. I hope you’ll tune in again next week.