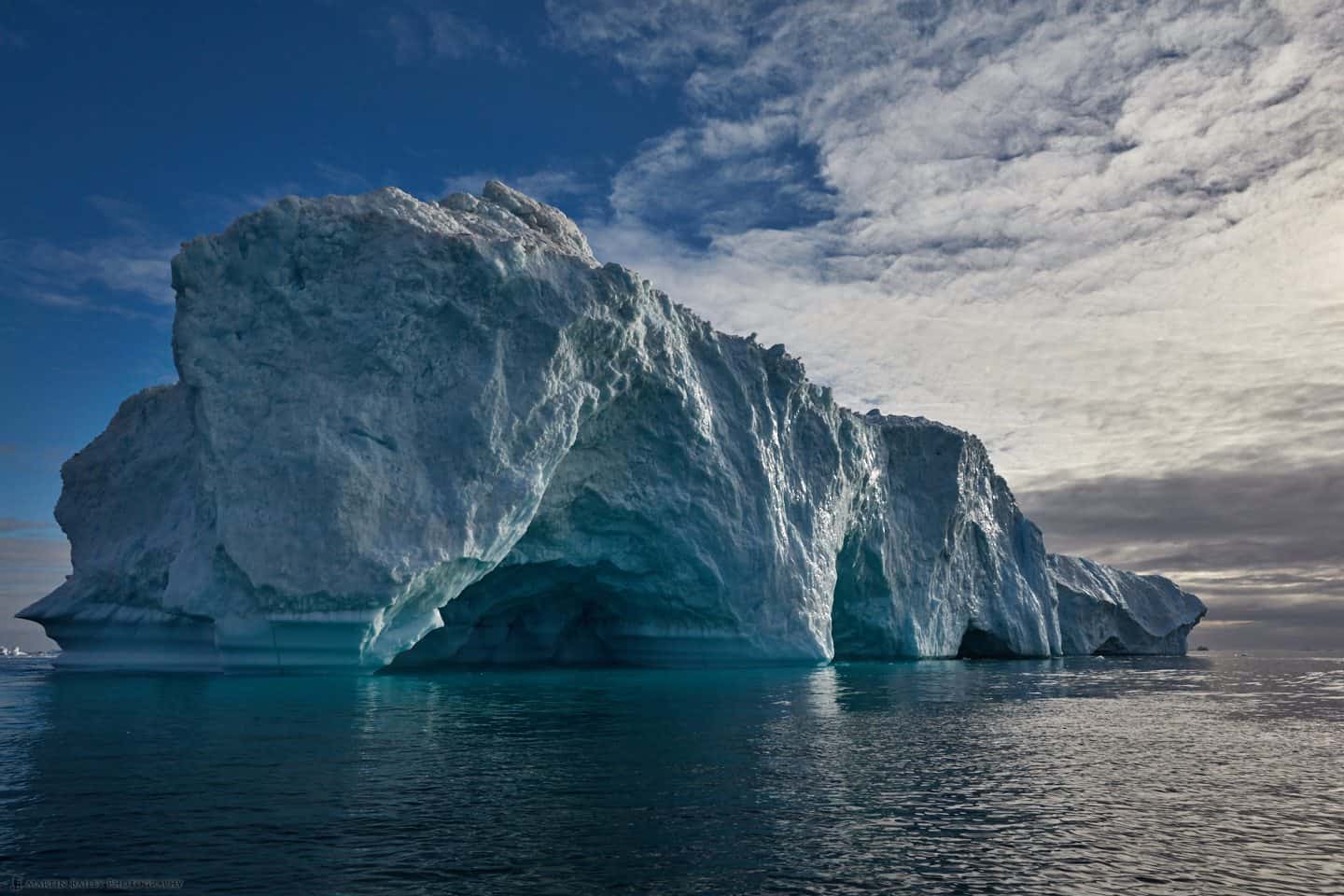 This week we continue with part two of a four part travelogue style series of episodes, to share my recent photography adventure in East Greenland with you.

On our third day in East Greenland, we headed west out of the bay at Tasiilaq, towards the Sermilik Fjord, which we would travel up around 20 kilometers, then hang a left into the Johan Petersen Fjord, to the Hann Glacier. The first photo that I wanted to take a look at today (below) was just south of the Ammassalik island, looking out towards open ocean. 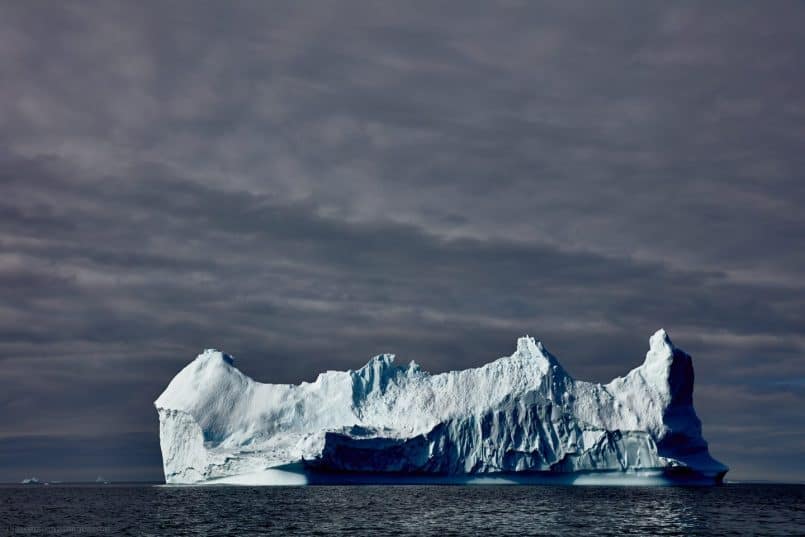 I was attracted to this scene, first of course by the huge iceberg, but also by the heavy sky, in contrast to the brightly illuminated ice. I often like to go in close and show more detail in the berg, but here, I chose to go wide, to include more sky. As with the iceberg that we started part one of this series with, I still have a number of shots of this one in my final selection. An iceberg with character seems to almost demand more than one photograph.

The Sermilik Fjord is incredible. It’s very wide, and has lots of icebergs. You could spend a good day just shooting on this stretch of water. Here is one iceberg that we found with a nice archway in it (below). For this photograph, I used a circular polarizer filter to remove the reflection on the water, to make it look darker, but also to enable some of the blue of the base of the iceberg to show through. 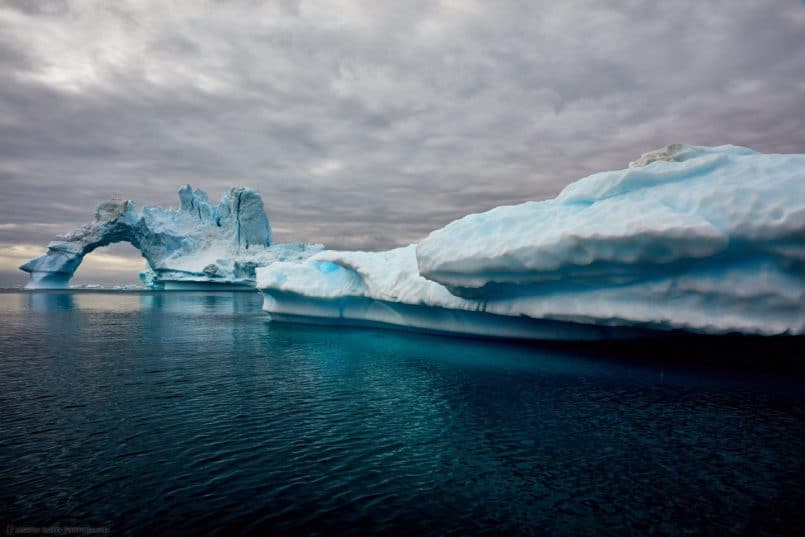 Again, there’s that heavy sky still, which I like as a backdrop for these shots. We had clearer skies on some of the later days, which are good in their own way, but as with most of my photography, I generally prefer moody, heavy skies like this.

Here’s a somewhat self-indulgent shot next (below) to illustrate a point more than anything. This is me, drinking from a pool of water in the top of an iceberg, inside the Johan Petersen Fjord. This was a flat iceberg, that we could step onto from the front of our speedboat. 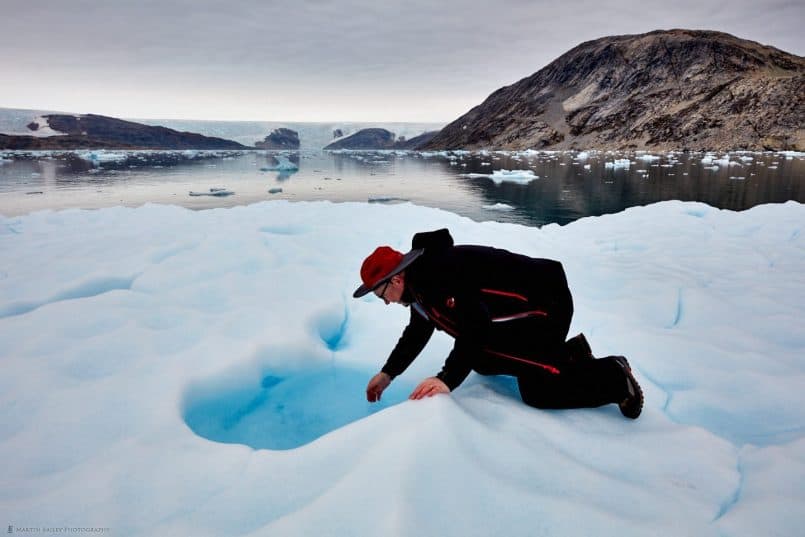 Just to the left of the scene in the previous photo, is the Hann Glacier, our goal for this day. In front of the Hann Glacier there is a little strip of rock that juts out into the fjord, and in that rock there are a few small crevices, such as the one you can see in this photo (below). 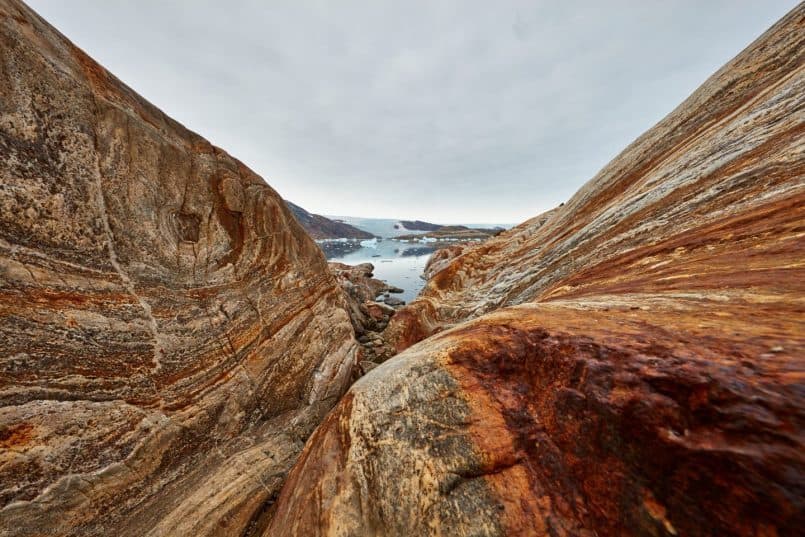 This was a fun shot, because it kind of resembles Slot Canyon, although I enhanced that feeling by shooting this at a very low angle with my 11-24mm f/4L lens, at 12mm. The glacier that you can see in the distance at the Bruckner Glacier, although it’s pretty small at 12mm.

The Hann Glacier is nice, but I don’t really have any photos that I’m happy to share. I actually have better ones from a helicopter ride later in the tour, which I’ll probably share later.

As we sped back down the Johan Petersen Fjord, heading home as we continued to photograph icebergs, we went past the mouth of the Stoklund Fjord, through which we got a beautiful view of the distant mountains, as you can see in this photograph (below). 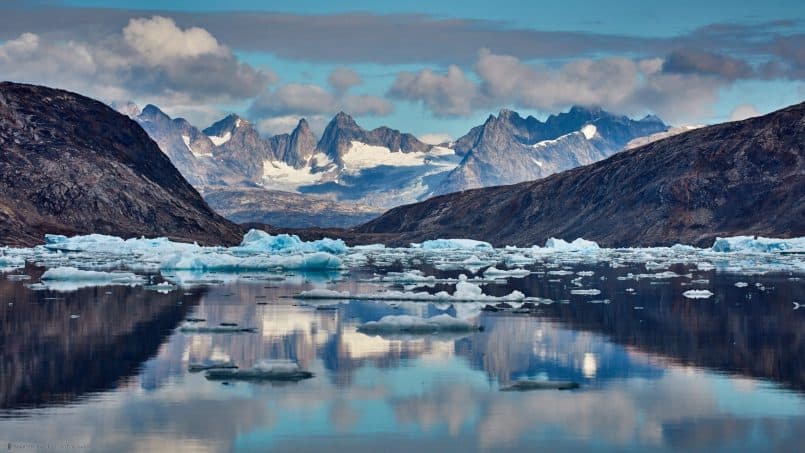 The Stoklund Fjord and Distant Mountains

As we tried to make good time, some of the images that we made were shot while going relatively fast on our speedboat, and I believe this was one of them. To ensure that my hand-held shots from a moving boat were sharp, most of the time I was using around 1/400 of a second shutter speed, as I did for this shot, and sometimes faster as necessary.

Something that always fascinates me, is how different an iceberg can look from various angles. I was initially attracted to this jagged iceberg (below) because of the slight similarity between the peaks of the iceberg, aligned with the peaks of the distant mountain. 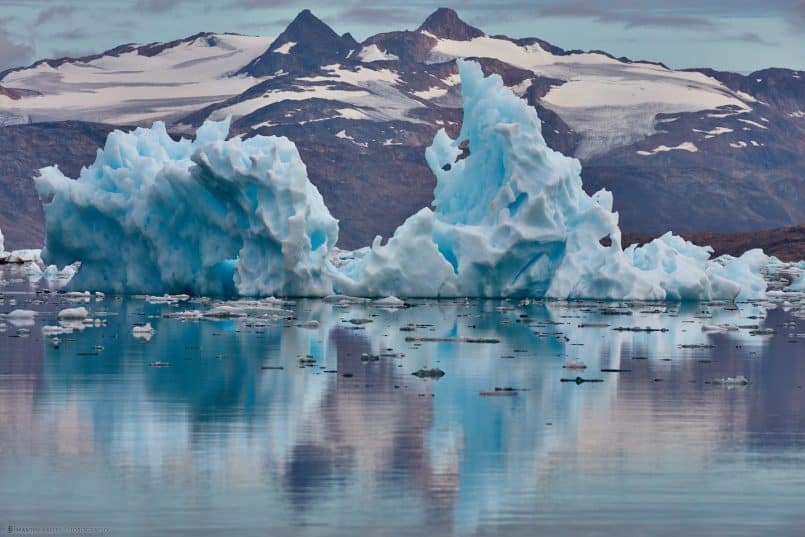 Although you can see this texture in both images, I thought it was pretty interesting that from the side, this ‘berg took on a different appearance, and looked almost like a big blue swiss cheese, as we can see in the following image (below). 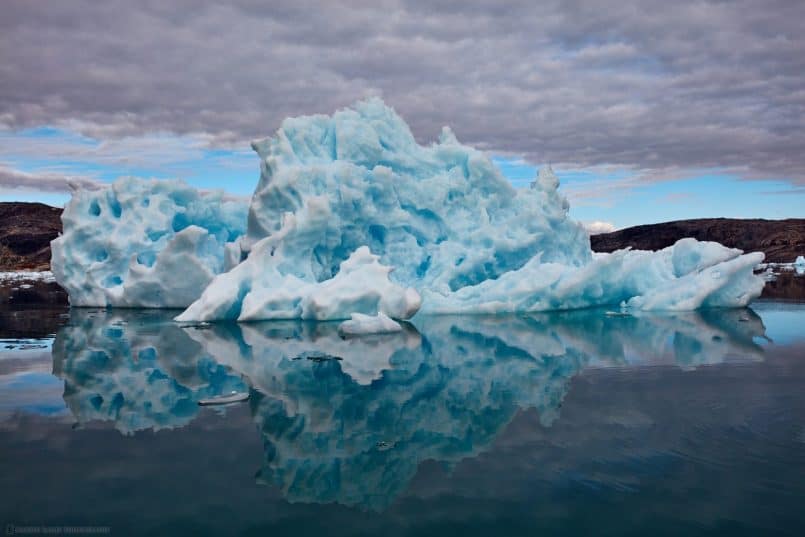 We also saw some icebergs that looked like a huge piece of ice shelf from one side, and when you go around the other side, they were completely hollowed out, with nothing in the middle but a blue pool. They can be a little bit deceptive these icebergs.

Back in the Sermilik Fjord, I shot this next photo (below) which I quite liked. This is one of those shots where I was trying to avoid showing the land either side, so I cropped in really tight on the left iceberg. I also like the reflection of the icebergs in this shot, and the repetition of the angle made by the left and center bergs. 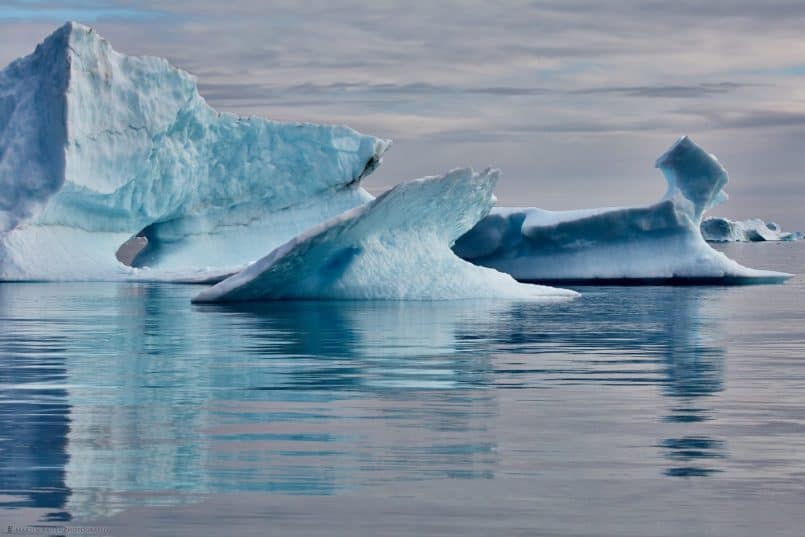 Earlier that day, we’d hurried past an interesting iceberg, trying to make good time to our main goal for the day, but on the way back, with the light now actually much better, we stopped, and I was happy to have made this shot of what I consider to be a somewhat Monumental Iceberg (below). 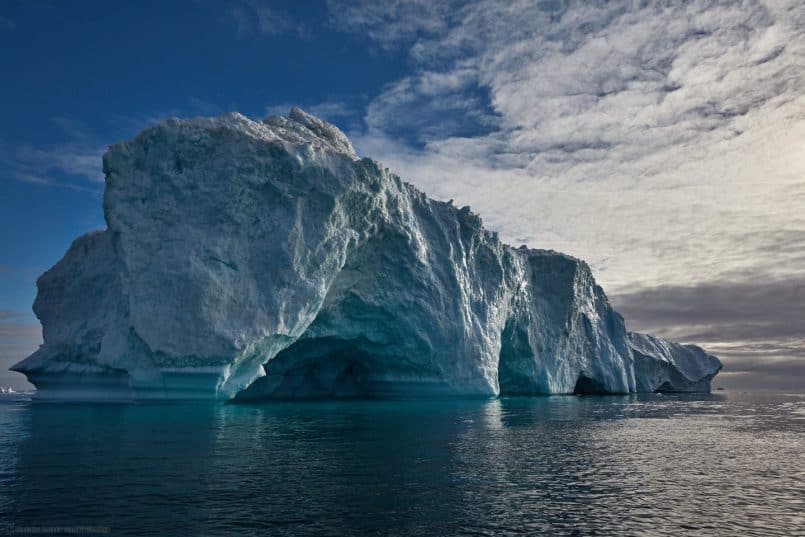 This berg was big, but I accentuated its size by shooting with the 11-24mm lens at 21mm, making the closest part of the berg and those arches look bigger in comparison to the parts that are further away. The sun being just out of the frame to the right, also helped to bounce lots of blue-green light back up into the arches, which I thought added a nice touch.

Once we’d done a lap of the monumental iceberg, we really were out of time, although we were still a good 45 minutes from Tasiilaq, so our speedboat driver for the day took us at speed through a narrow gorge, which is a bit of a shortcut. We didn’t have time to stop, but I couldn’t resist shooting this last scene for today (below). 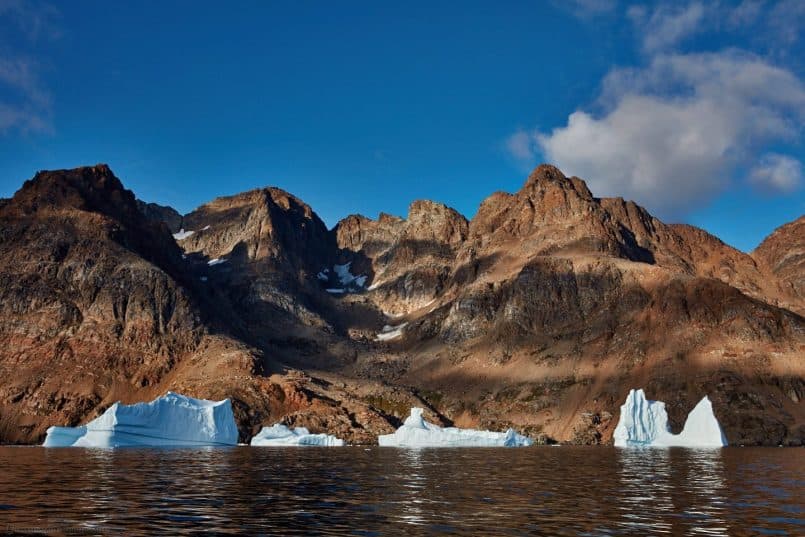 I loved the contrast between the cool ice and the warm colored mountains, also now with an almost totally clear blue sky. This is the blue that you could see creeping in to the top left of the previous image. In Japanese the word for iceberg is hyouzan (氷山) which literally means an ice mountain. I thought it was fun that these ice mountains were so close to their rocky cousins for this shot.

You could also be fooled into thinking that it was quite warm as we made this photograph, due to the warm tones of the rock. While the temperature ranges from around zero to 6°C, or 32 to 42°F, I’d estimate that the windchill from the speed that we travelled on our little speedboat, made it feel more like -10°C or 14°F. While we were stopped, even the low temperatures felt quite balmy, but at speed, it felt really cold.

OK, so we’ll wrap it up there for today. I’ll be back next week with part three, and another ten photos, and I hope you’ll join me again then.