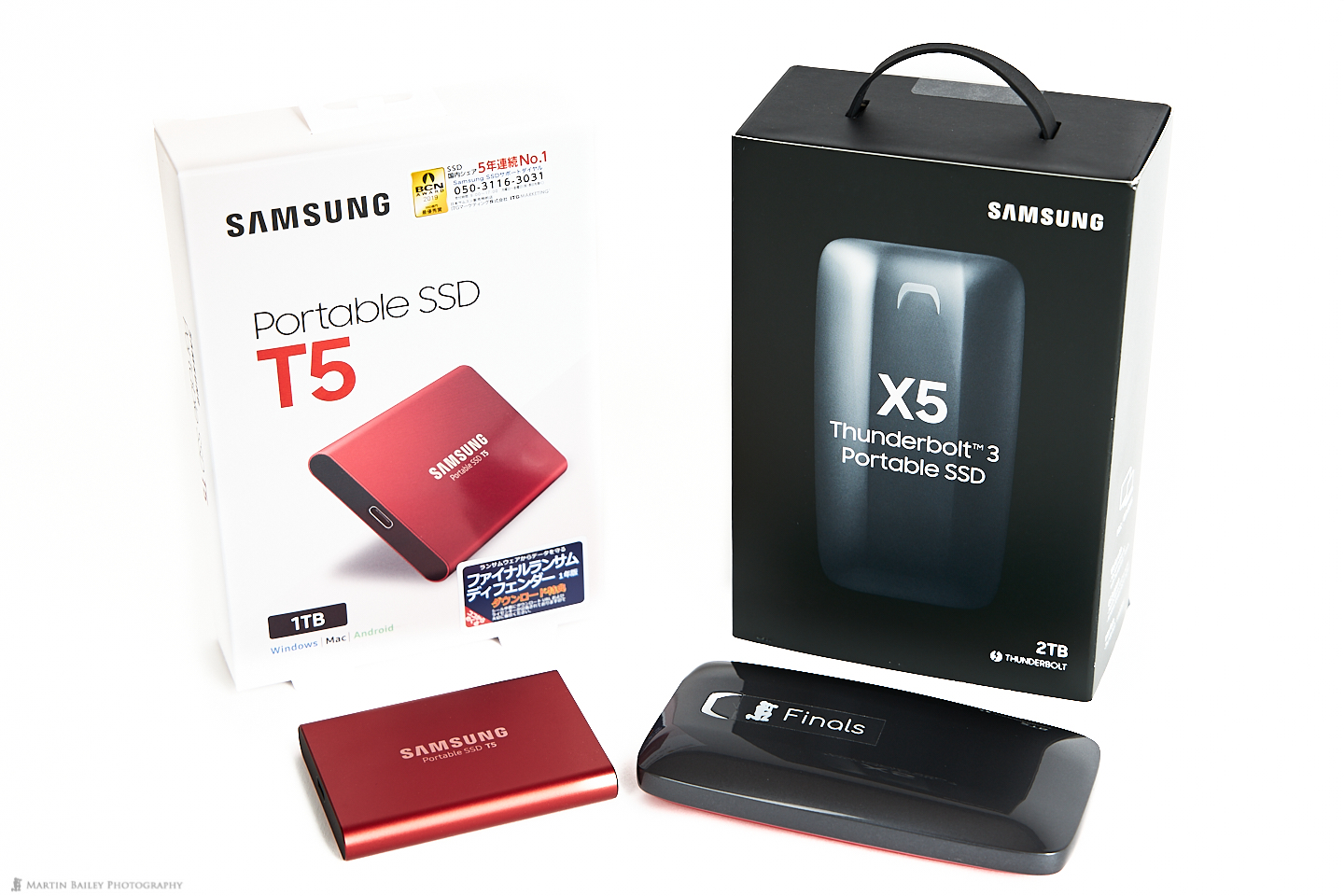 There are a number of SSD drives on the market and the price is starting to drop to the point where these are becoming a real option as storage of our image libraries as well as a good way to move our editing software catalogs between computers, so we’re going to look at what I’m using today and talk about some of the considerations we need to keep in mind when buying SSD drives. This isn’t an exhaustive list of available drives, but with a little bonus information, this will hopefully be able to arm you with the tools to make the right decisions when it’s time to take the plunge.

The Need for Speed

One of the most important things to keep in mind when buying a hard disk or a solid-state drive, otherwise known as an SSD, is the speed at which your computer or device can read and write data to and from your drive, and this is directly affected by the standard used for connectivity of the drive. There have been a number of standards over the years, but the various versions of USB, which stands for Universal Serial Bus have become probably the standard that trumps all others in terms of the terminals or connectors.

Intel introduced the Thunderbolt standard a number of years ago, in collaboration with Apple, and the first two versions used the Mini Display Port, but Thunderbolt 3 saw some welcome standardization as it uses the USB C connector, but as we’ll discover, everything that uses the USB C connector was not created equally, so even buying cables can be a bit tricky if you aren’t careful, so we’ll cover that too.

If you get it right though, these drives deliver very fast read and write speeds, and this enables us to access our images quickly, so we can work faster, and hopefully stress-free. All of the drives that we’ll look at today are fast enough to also handle storing and using our editing software’s catalog directly on the drive, and that is a great way to move between computers. You can simply open your catalog on any computer, assuming you have the software that you use for editing the images loaded on each computer.

We might as well start our walkthrough of the SSDs with what I believe to be the best SSD drive on the market in terms of speed, and that is the Samsung X5 drive. I use two of these SSDs daily; one for my current year of images and Capture One Pro catalog, and a second for my Final Select images, again, along with my catalog. The Finals label in the photo is, of course, my own addition. When I have two identical drives, I always label them, so that I don’t have to plug them in to find the one I’m looking for.

These drives are amazingly fast, because they connect to our computer via Thunderbolt 3, giving actual read speeds of 2576 MB/s and write speeds of 1932 MB/s on my iMac Pro. This slows slightly on my late 2016 MacBook Pro, to 1323 MB/s read and 1013 MB/s write speeds. In practical use, I cannot tell the difference in the speeds when moving between these computers. Capture One Pro is completely stress-free on both machines.

I have to tag on a word of caution with these drives though, as this could be a serious problem for anyone moving between older and newer computers. If you have only new computers that have Thunderbolt 3 ports, you have nothing to worry about, but if you need to access data on these drives over USB 3 or older, you will have to use one of the other drives, because a computer with regular USB 3 ports will not be able to read these drives, even if you use a cable that converts the terminals.

I believe Thunderbolt 3 was introduced on the Mac computer in my Late 2016 MacBook Pro, so if your computer is older than that, and has the large wide USB Type-A ports, you’ll need to avoid this drive. The other thing to keep in mind with this drive is that although the price has come down some, they are still very expensive, with a price tag of $799 for the 2TB version, and $400 for the 1TB version, so you’ve got to be able to utilize the speed of these drives to really warrant the cost. They are very well-made though, and apparently will withstand a drop from six feet thanks to their casing and build quality, and that is comforting as well.

Also note that if you buy a third-party cable to connect the X5 SSD to a computer over Thunderbolt 3, you will need to source a true Thunderbolt 3 cable, as opposed to a regular USB C or USB 3.1 Gen 1 or Gen 2 cable. USB 3.1 Gen 2 caps out at 10 GB/s, whereas Thunderbolt 3 runs up to a smoking 40 GB/s. Of course, both will provide enough speed on paper, but I have noticed slower transfer speeds when using 10GB/s cables, so ensure that you search for Thunderbolt 3 to enable things to smoke at their top speed. To test the speeds of your drives search for the Blackmagic Disk Speed Test in the Apple App Store, and if you are on Windows the CrystalDiskMark is a great tool.

At a much more reasonable price, again, in my opinion, the best drive available at the moment when it comes to size, price, and speed is the Samsung T5 range. This is not the fastest option; that honor remains with the previously mentioned Samsung X5 drives, but the T5, which is available in 500GB, 1TB, and 2TB models and is still very fast, with claimed speeds up to 540 MB/s.

So, the important thing to also note here is that this drive connects via USB 3.1, which supports up to 10 GB/s transfer speeds, so the speed we are seeing here is limited by the SSD itself on my USB C machines, and by the bus on my older USB 3 iMac. It’s readable on all three machines though, and that, right there is one of the reasons I bought this drive. Because I have a lot of music-related files that I need to move between all three of my computers, I needed something that they could all read, but still be fast enough to not hinder the speed of my software, and this was the solution.

Having said that, I know many people that are using these drives for their images and storing their catalogs on them. Just from the speeds that I am seeing here, I know myself that this is plenty fast enough for the photography catalog scenario, which is why I’m including it in this review too. The other aspect, of course, is that these drives are tiny and weigh almost nothing! In this image, you can see the size difference between these two drives.

I’ve also included here my older Sandisk Extreme 900 drives, for comparison, but also as an honorable mention. These drives are now the backups for my two X5 drives, but they boast 755 MB/s write and 860 MB/s read speeds, over USB 3.1 Gen 2, which is also backward compatible with USB 3 and so these also work with my old iMac, but unfortunately these drives have now been discontinued, so I won’t go into detail. For reference, these drives were actually slightly bigger than your regular 2.5-inch spinning drive hard disks, so that should give you an idea of the size of both the X5 and the tiny T5 drives. A good alternative to the Extreme 900 if you prefer Sandisk products would be the Extreme Portable range.

The T5 is also very reasonably priced now, at under $140 for the 1TB version and $250 for the 2TB version. That means they are around one-third of the price of the X5, so with these still very good read/write speeds, they are a very viable option. Seriously, with the size and weight of these little solid-state drives, it makes traveling, working on and backing up our images on the road a breeze. I bought a 1TB version for my music files, because that’s all I needed, but if anything happens to my current backup drives for the X5s I will replace them with a T5, and as I say, if the X5 is a little out of your range, or the tiny form factor of the T5 is more appealing, they are a great choice.

I should also mention that the T5 comes with both a USB C to USB C cable as well as a USB C to USB Type-A cable, so you are set for whichever system you want to use this drive with. One other tip for the weight or bulk conscious traveler is that if you’d prefer not to carry both cables around, and say you are using your cables for various devices, there are some great little adapters available these days. I have a few that convert USB Type-A connectors to USB C and a few that convert USB C to Type-A connectors. This just helps me to do pretty much everything conceivable with fewer cables when I travel.

A few other things that I’d like to mention with regards to the benefits of these SSD drives is that because they don’t have a spinning drive and read-head, they aren’t anywhere near as susceptible to bumps as traditional hard drives. I recall having to move my laptop and bumping a connecting hard drive in the past only to find that it had temporarily shut down and my transfer stopped.

If you happen to actually drop a hard disk drive while it’s spun-up, the chances of causing permanent damage are relatively high. So much so that you really don’t want to be walking around or moving hard drives at all if possible while they are in use. SSDs are not indestructible, and you still have to be careful not to disconnect them by wiggling the cable, but a knock or two, in my experience, is rarely going to cause any permanent damage.

OK, so we’ll start to wrap this episode up now. I hope some of these points are of help if or when you decide to pick up an SSD drive for your photography or any other computer-related pursuit that needs fast external storage. I can’t believe how far we’ve come over the last 30 years or so as computers have become main-stream and More’s Law has seen to it that our peripherals continue to give us higher and higher specs each year while maintaining reasonable prices.

I’ll put some links to the items mentioned below which are affiliate links, so if you want to support my efforts here on the blog and podcast, and you are going to buy any of these products, please use my links, and I get a small payment as well, without changing the price to you at all. And I should also mention for the record, that this review was not sponsored in any way, and I paid for the drives I am using with my own money. Thanks as always for your support!

Martin Bailey is a nature and wildlife photographer and educator based in Tokyo. He's a pioneering Podcaster and blogger, and an X-Rite Coloratti member.
PrevPreviousUrban Weird Photographer Brian Wood-Koiwa (Podcast 685)
NextRolleiflex 3.5F TLR Camera and Accessories (Podcast 687)Next