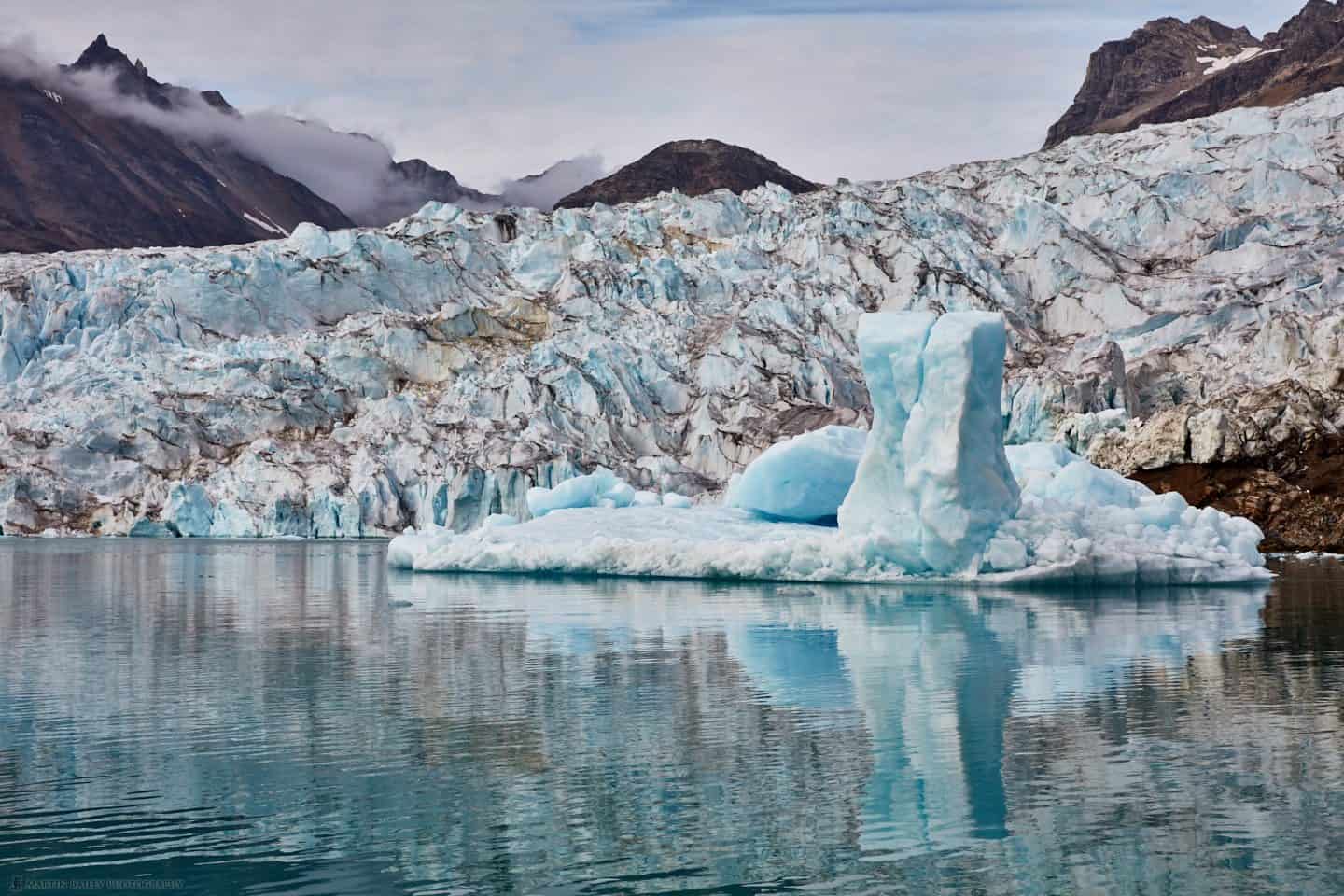 Having just completed a 7 day tour of East Greenland, today I’m going to share some of my experiences and photos in the first of a travelogue style series of episodes.

East Greenland was so much more than I expected, and in many ways much different. I hadn’t, for example, expected the landscape to be so rugged, or as colorful, as it is. I guess the sheer number and size of the glaciers should have given me a hint as to the geology of Greenland, but I didn’t expect the rock to be mostly of a greenish-brown color, and I found that quite beautiful.

We spent six nights and seven days based in the town of Tasiilaq, on the Ammassalik island. We spent some time walking around the town, but mostly traveled out of town, via the nearby fjords, photographing the icebergs, the beautiful scenery, and on a few occasions, we had wonderful encounters with humpback and fin whales.

I shot some 3,300 images, an average of around 500 per day. This is high for a predominantly landscape trip, and that was partly because we did see some wildlife, which you tend to shoot in bursts, but also because we travelled mostly by boat, so I tended to shoot more because of the rocking of the boat and I was shooting handheld. It was also simply because the place was so beautiful, it was hard not to shoot.

I kept up with my selection process, marking all of the images that I wanted to process by the end of each day, and all but two days, I was able to get the majority of my processing done too. This was the first trip that I’ve processed exclusively in Phase One’s Capture One Pro 9, having switched recently. I’ll talk more about the processing in a future episode, but I just wanted to let you know that I found the experience really easy, and I was getting great results, as I expected.

After a day in Reykjavik after Greenland, working on my images, I was able to get my initial selection of photos down to 178, from which I’ve selected the first ten to share with you today. I’ll put together a portfolio of work from the trip, and probably a slideshow with some of the video I shot later as well, but for now, we’ll work through this first selection, and I’ll continue the series in blocks of ten images for a few weeks.

Helicopter Ride from Kulusuk to Tasiilaq

We flew in to East Greenland from Reykjavik, Iceland, to land on a dirt runway in the town of Kulusuk. We’d revisit Kulusuk by boat later in the trip, but with our luggage, on this first day, we started our time in Greenland with a nine minute helicopter ride to Tasiilaq.

This first photo (below) is really a documentary shot, to show you the view from the helicopter, as we entered the bay at Tasiilaq, just to the east of the southern tip of the Ammassalik island. As you can see, the rocks of the islands form almost sheer drops into the ocean, allowing icebergs, of which 70% is below the surface, to draw very close to the shore. 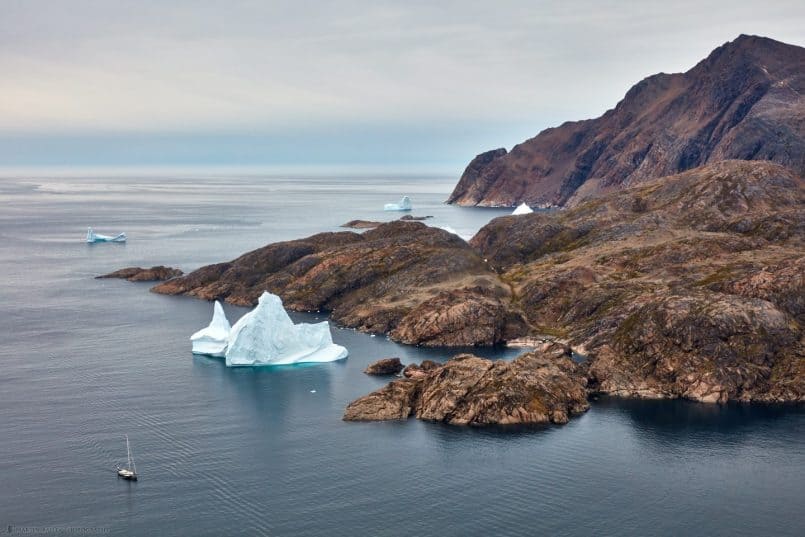 Just to the right of the scene in the first image, we stayed in the only actual hotel in Tasiilaq, that is situated almost at the highest point in the town, so the first thing we did was to grab our cameras, and document the town and bay, as you can see in this photo (below). This isn’t the prettiest angle to photograph the town from, but it does give you a good idea of the place, with the colorful houses, the large red fish processing plant down by the harbor, and the town football ground, in the right foreground. 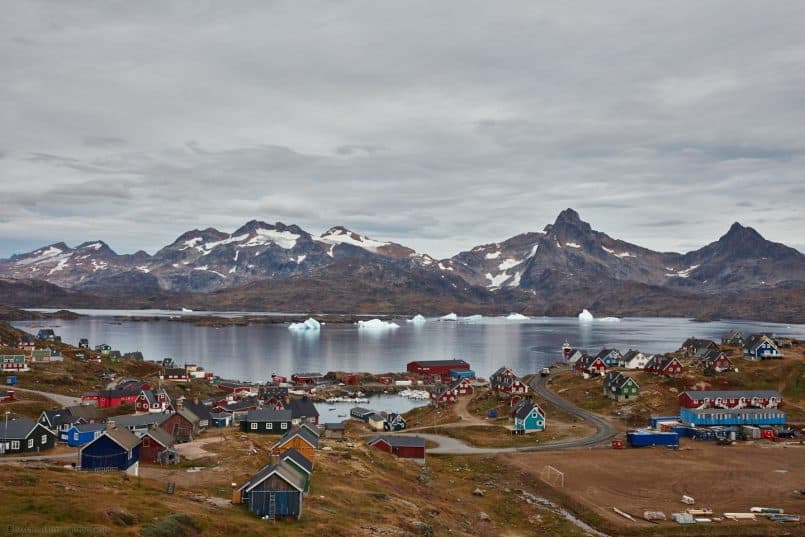 The Town of Tasiilaq – East Greenland

The hotel owner proudly told us that construction of their new roads through the town had just been completed the previous week, and the roads were very nice, especially when you consider that they were just potholed dirt tracks until recently. 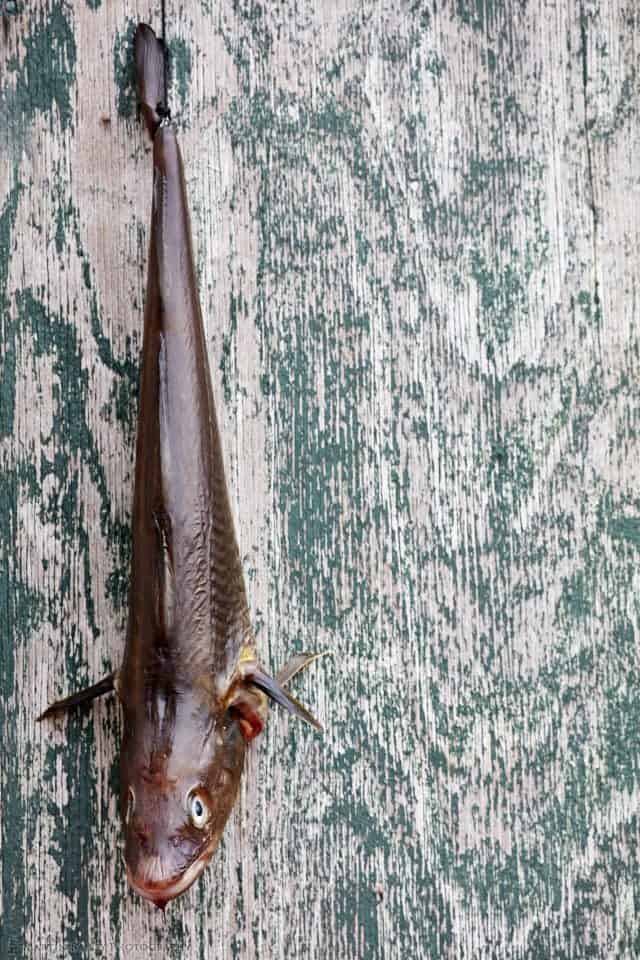 There are a few cars in town, which help with getting up and down the steep hills, but the furthest you can drive is around 2km. There are no roads out of town. The only way to get in or out of town is by boat, helicopter, or on foot.

On our first afternoon, we went for a walk around town, to find our bearings. I’ll probably show more images of the town in a slideshow and portfolio later, but for now, here’s a shot of a fish, hanging from the eaves of one of the homes (right).

It seems that most homes have fish hanging under the eaves or from wooden racks. Most of the time the fish are gutted and opened up, but this guy looked pretty much like he did when he was swimming in the ocean, so I thought perhaps a little more appropriate to share here.

I like the contrast between the golden-brown of the fish, and the weathered green paint of the building.

The iceberg in the foreground of the first photo we looked at today, was still sitting in the channel just outside the bay at Tasiilaq, on the following morning, as we ventured out by boat for our first trip out on to the ocean, and then down the Ammassalik Fjord. This was so multifaceted that I still have 17 photos of this one iceberg in my final selection, from various angles and focal lengths. 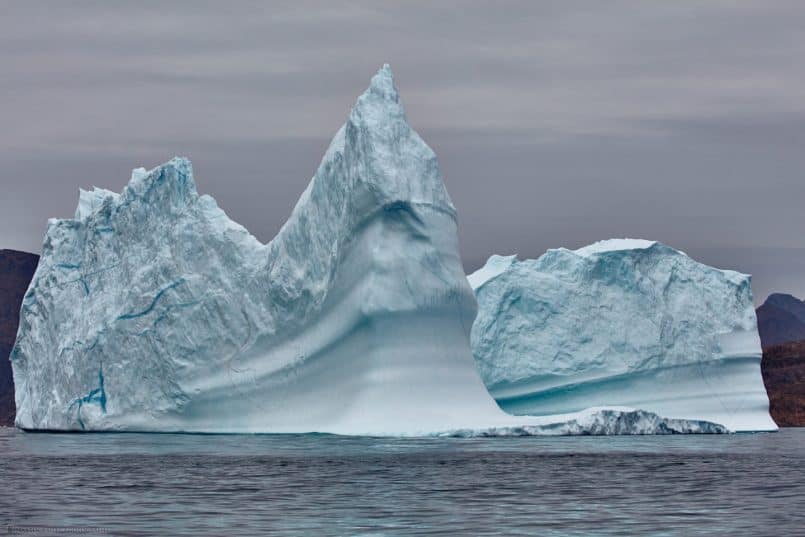 I couldn’t help thinking that the spike that we see here looks like the hat of a viking warrior, and below is half a face, with his eye socket, nose and a slight indentation for a mouth. I’d love to share more shots of this berg to show you why I ended up with so many still in my selection, but we’ll move on for now.

After heading south, out of the bay at Tasiilaq, we were greeted by a couple of pods of humpback whales, feeding. I got some nice minimalist shots of their flukes as they dived, but an encounter that I’ll share with you in a future episode trumped any and all whale encounters I’ve ever had, so we’ll save the whale shots until then too.

Afterwards, we hung a left, and headed north-east up the Ammassalik Fjord, and our first stop was definitely something that I had not expected, though pretty cool all the same. Apparently, during World War II, the US took responsibility for protecting Greenland.

Bluie East Two was a US air field and weather station, which was abandoned after the war. There are thousands of oil drums strewn across the landscape, which I didn’t photograph, but as we see here, there’s even a crane, abandoned on the beach (below). 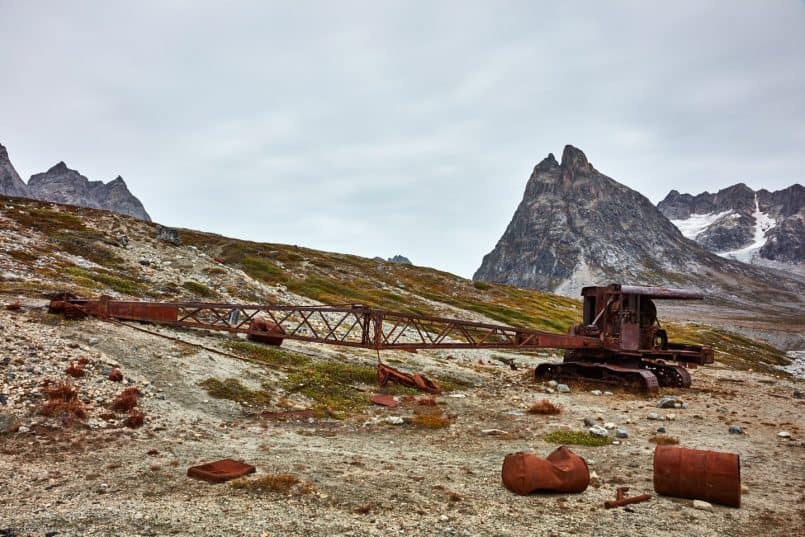 This is a slightly forced perspective, as I wanted to exclude a large telegraph pole sticking out of the ground to the right of the frame here. I used a new Breakthrough Photography X4 10 stop neutral density filter coupled with my old ND8, for 13 stops of neutral density, giving me a shutter speed of two minutes.

Here’s another shot (below) of the abandoned air field, and here we see the old 1940s military trucks, and the hanger in the distance, which has collapsed under the weight of the snow that falls here shortly after their short summer has ended. 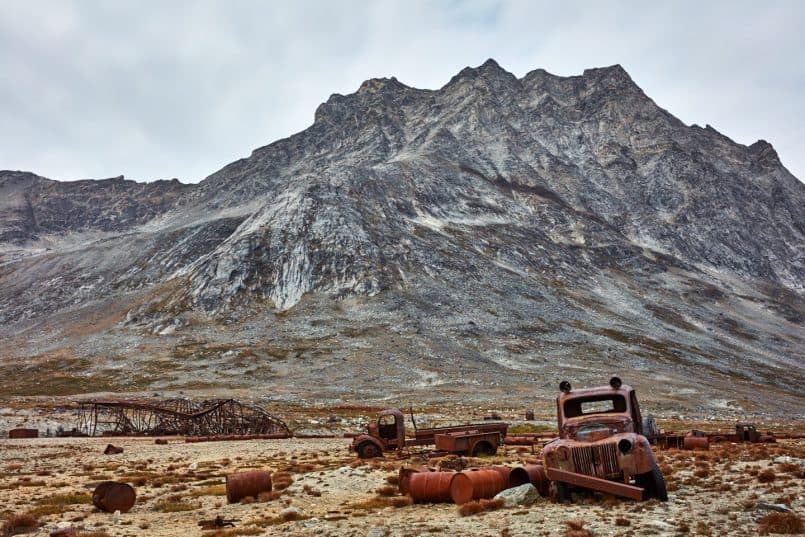 Because these are long exposure shots, I tried them in black and white as well, but this is one of the few occasions where the color of the rust in the trucks and oil drums was too important to the shot for me to take away. To the left of this scene there are literally thousands of oil drums strewn across the land. Apparently the local Inuit people appropriated most of the ones that still had oil in them, so it didn’t go to waste, or cause any pollution, as far as I can tell.

After an hour photographing the abandoned air base, we continued to sail along the Ikateq channel to enter the end of the Sermiligaaq Fjord and on to the Knud Rasmussen Glacier, where we stopped for lunch, before photographing the beautiful scenery there.

This is actually the furthest north that we went during this tour, and we are at this point actually inside the Arctic Circle. A first for me! Here is a photo of the glacier and its surroundings (below), shot a little way up the hill from the fjord. 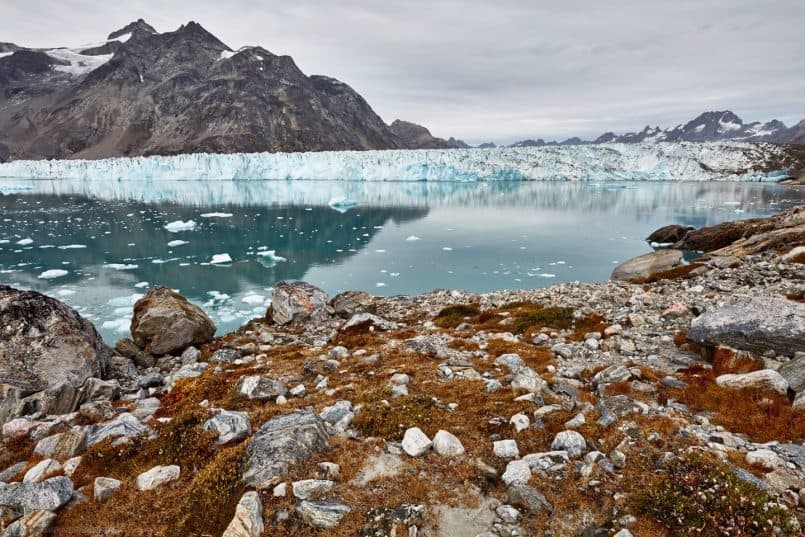 Unfortunately, these glaciers in Greenland, like most glaciers worldwide, are receding at an alarming rate. The map that I used during this trip was published in 1991, and shows the face of this glacier a number of kilometers further forward compared to where it actually is now. Even the relatively frequently updated Google Maps show me past the face of the glacier at this point, and the satellite maps, which are the most recent, show me right on the edge of the glacier.

For this next photo (below) we almost were on the edge of the glacier, although it’s often deceiving just how close you are, because these things are so huge. The face of the glacier here is at a guess probably 50 meters high or more. Even what appear to by tiny blocks of ice dropping off the face of a glacier like this causes a huge noise and ensuing splash and wave. 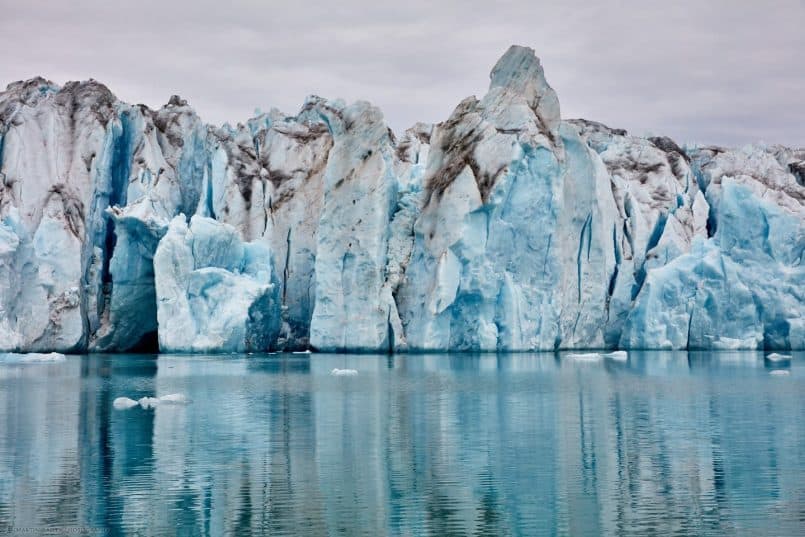 Face of the Knud Rasmussen Glacier

I like to photograph just the face of the glacier like this, to showcase the fissures and beautiful colors, especially when there’s a nice reflection, but I also like to find an angle that shows the glacier more in it’s environment, but still powerful, and I think I’ve done that in this next image (below) with an iceberg and ice pillar just in front of it. 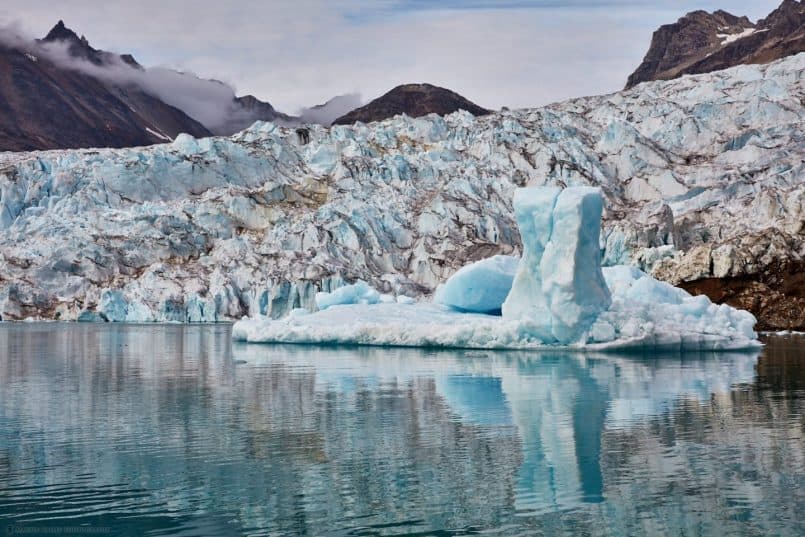 I shot this from our little boat as we started back after a break on land, before heading back down the fjord. I’ve enhanced all of these photos to a degree in Capture One Pro 9, to bring out the texture and the color of the ice and the sky etc. I didn’t do much, but I’ll share some of those techniques in a future workflow episode in the coming weeks.

Further back down the Sermiligaaq Fjord, just before the entrance to the Ikateq channel, we stopped to photograph this iceberg (below) which I thought was particularly beautiful. Of course, we stopped to photograph many more, but in trying to keep this to ten images per episode, and because this is one of the last images that I selected from our first day out on the boat, we’ll finish with this for today. 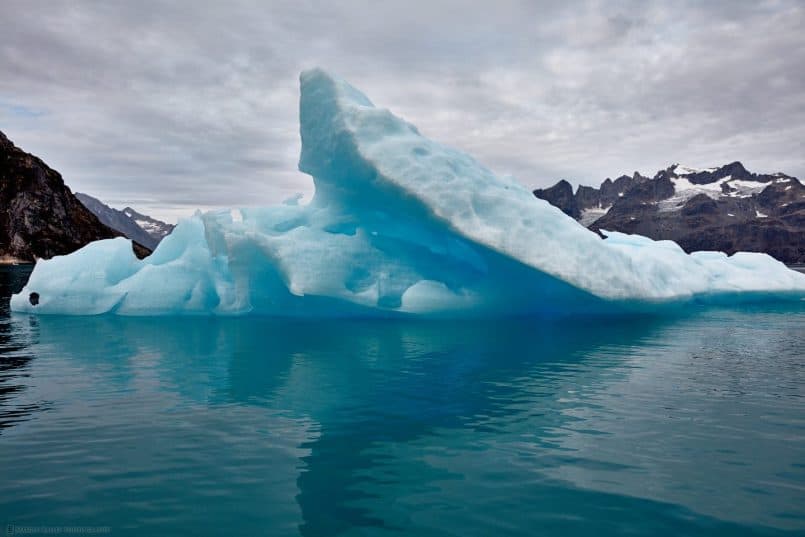 Iceberg on the Sermiligaaq Fjord

I’m always amazed by the blue color in some icebergs. It never gets old. This trip in many ways was as good, if not in some ways better than going to Antarctica. I love Antarctica, and I’ll definitely go back at some point, but it’s a long way down there and much more expensive. When you consider how much easier it is to get to Greenland, I think it’s going to become a very popular spot in the coming years.

Then, all of the ice will melt and there’ll be nothing left to see, but that goes for Antarctica as well, if we, and that’s a collective “we” meaning the human race, don’t change our selfish ways.

OK, so we’ll wrap it up there for this week. I hope you’ve enjoyed joining me on the first couple of days of my recent tour to East Greenland. I’ll be back next week, with part two of this series, so I hope you will join me again as I continue my adventure!