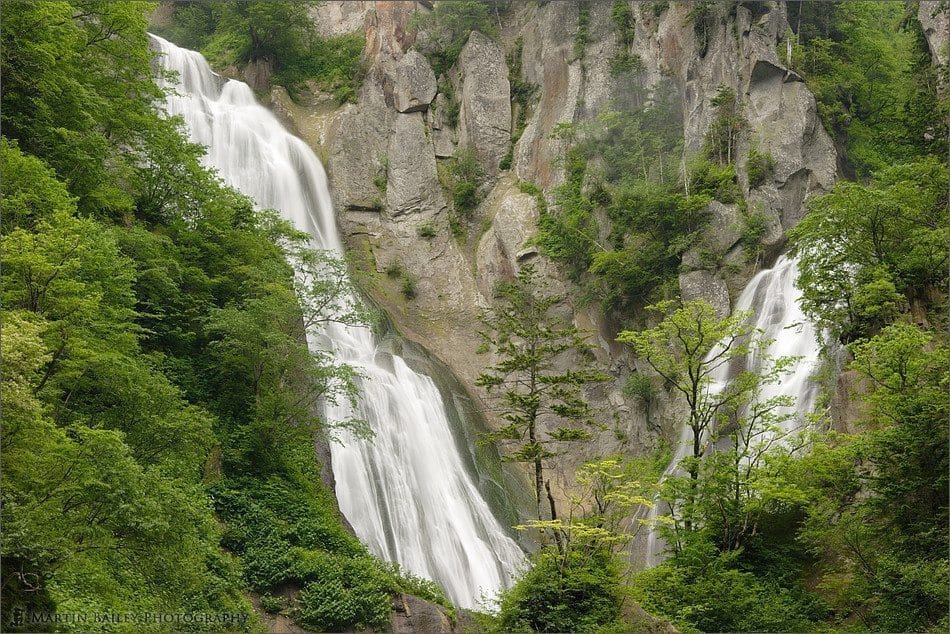 Getting in Close in Landscape Shots (Podcast 8)

Although I love a wide sweeping landscape, it is often very effective to get in close, and just cut out a small area of the scene.

Firstly, I just want to say a big thank you to Robert Rodriguez Jr. for his mail in support of my views on not giving away your images from Episode 7. Rob’s mail reads:

Just wanted to commend you on the excellent podcast concerning copyright and the business aspect of photography. As a professional musician and amateur photographer myself, I couldn’t agree with you more on the importance of holding firm to ones beliefs about what your work is worth, especially when it is your livelihood. I think those who may take offense are those who have not invested their entire lives in pursuit of their creative ambitions. Keep up the good work, looking forward to more Podcasts.

Rob also points us to an interesting link on Photographer Paul Butzi’s Web site about luck in photography. Take a look for yourself if you’re interested, on http://www.butzi.net/articles/luck.htm [no longer live]

Thanks for your mail and support Rob! So, moving on to today’s main topic… 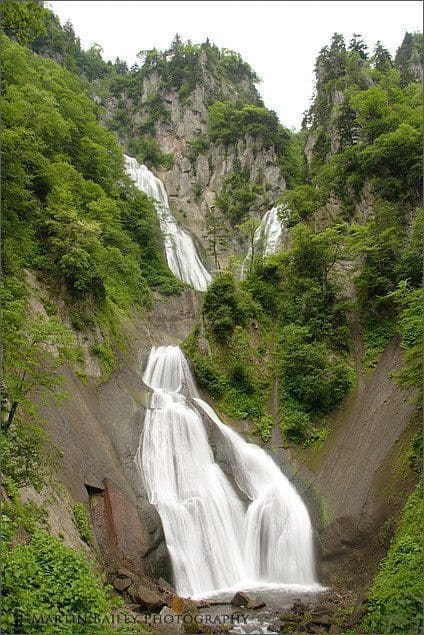 I love to make wide, sweeping landscape shots, and enjoy looking at those of others. But we can also make, in fact maybe even more often make more interesting, effective and beautiful shots by getting in close, and just cutting out a small area of scene. When faced with a beautiful vista, the human eye has an amazing propensity to zoom in on certain areas, many areas of the scene in an instant. Due to this, even though we may also have lots of memories of certain areas, we tend to record the whole scene in memory. The areas we zoom in on, initially subconsciously, are often those that capture our interest. It is up to the photography to realize where those areas are and record them to film or digital memory, not just our mental memory.

When photographing animals I often try to get a close up of their eyes, as I find them enchanting and beautiful, be it a bird or mammal, but insects too. In the same way, when looking at a landscape, in addition to getting the obvious shot of the whole scene, the sweeping landscape, I try to find areas of the scene that would be interesting if isolated in the frame.

This might also be appropriate if you don’t have optimal weather or light conditions for the vista shot. It will also set your shots apart from what your average photographer might.

First let’s look at shot number 682 of the beautiful Hagoromo Falls in Hokkaido, the northern-most island of Japan. If you are listening on an iPod Photo you will be able to see this first photo. If you are listening on iTunes, click the thumbnail in the bottom left of the window and you’ll be able to see the photo much larger. To view the photo using the number, go to my Web site at martinbaileyphotography.com and enter 682 in the small box under the Podcasts section on the top page, or jump to my Podcast page and find Episode 8 in the list, then click the first thumbnail.

You’ll see the falls in all their glory, with the two falls at the top flowing down to make the larger, single waterfall at the bottom. Now this shot in itself is nice, but the weather wasn’t great, so there’s a large patch of white sky, that really detracts from the shot if anything. So, having made this documentary style shot at 20mm with a Canon EOS 20D, making an effective focal length of 32mm, and allowing you to see the entire waterfall, I then switched from vertical composition to horizontal, and recomposed the shot to include just the top two falls, zooming in a little to 53mm. This is an effective focal length of 85mm due to the crop factor. The next photo, 683, is the result. 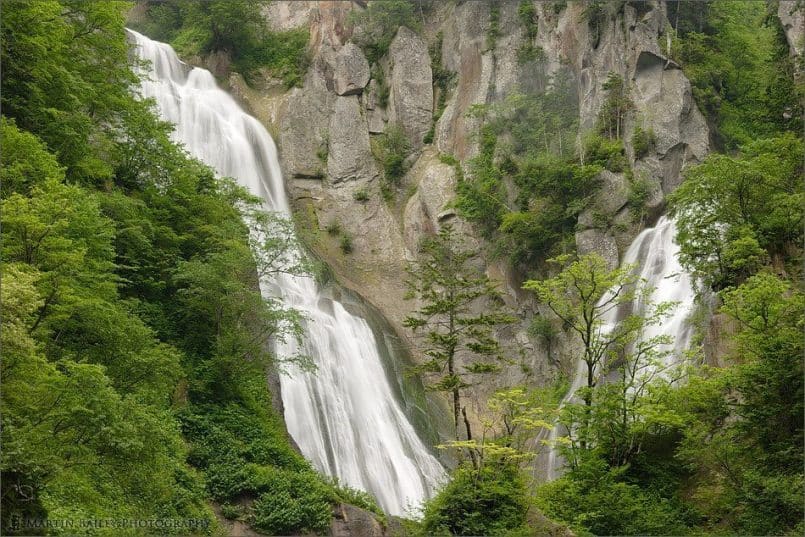 Now, as there is currently no software available for Windows to make an Enhanced Podcasts, you will only see the first shot if you are listening on an iPod. If you are viewing in iTunes though you can click the little arrow above the thumbnail and open the next photo to see just the two top falls in the tighter crop. Also note that from version 6 of iTunes you can open multiple image windows simultaneously, so you can open both the first photo and this one together to compare them. If you are looking on my web site, the thumbnails will open new windows anyway to allow you to do this.

Anyway, once you can see the shot, I hope you’ll agree that the second shot here, although not allowing you to see the overall splendor of the falls, does allow you to inspect much more closely the foliage of the trees and see more detail in the flowing water and rock face etc. I’ve also cropped out that white uninteresting sky, allowing you to concentrate on an interesting part of the Hagoromo falls. I particularly like the detail in the trees in the foreground. I’ve printed this out on A3+ paper and looking even through a loupe the detail is just amazing. Of course I was using a tripod, as it was quite overcast. I closed the aperture down to F11 to get a deep depth-of-field, and allow me to get a shutter speed of 1/3 of a second at ISO 100, which is necessary to give the water a slight flowing effect. I took some slightly slower to see the effect on the water, but they became a little bit overdone. I find the effect at 1/3 of a second just right. I was also checking the histogram to ensure that none of the water became over exposed and blown out. +1/3 of exposure compensation started to blow this out, so the camera meter was doing a perfect job, which is not surprising as the center of the shot is a neutral rock face and I was using the 20D’s center weighted metering mode.

So, hoping that you agree that cropping out the center of this shot, and showing you the part of the scene that I found most interesting was a success, let’s move on to another example. Take a look first at photo number 546, which is a mediocre sunset shot, including the steam from the Radford Power Station’s cooling towers. This was made during a visit to my brother’s house in the UK in December 2004. 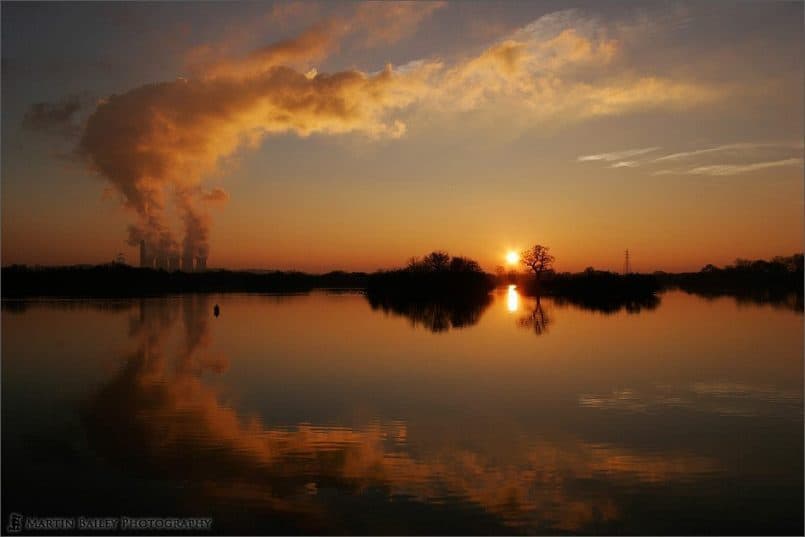 I found the mix of man’s distructive power and nature’s beauty interesting, but then take a look at the next shot, number 545. This was made a few minutes earlier a few steps to the right from where I made the last shot. This shot was made at 190mm, which is just over 300mm effective focal length on the 20D, compared to 22mm or 35mm with the crop factor. Both shots have interest, but again, I hope you agree that the tighter crop, picking out a certain area of interest makes for a more effective, dynamic and pleasing image. 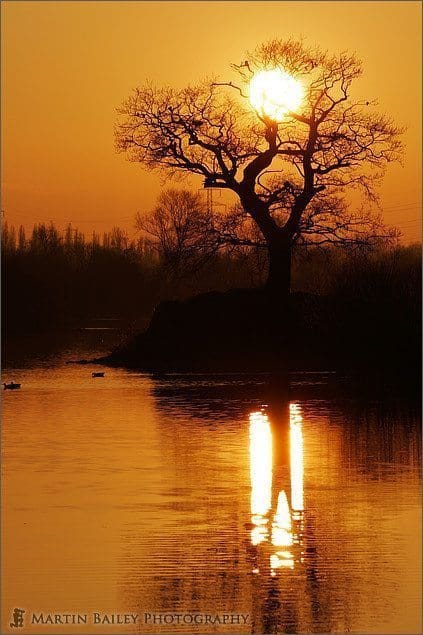 Finally, one last image from the same spot, made about ten minutes later just as the sun hits the horizon, which is number 547. 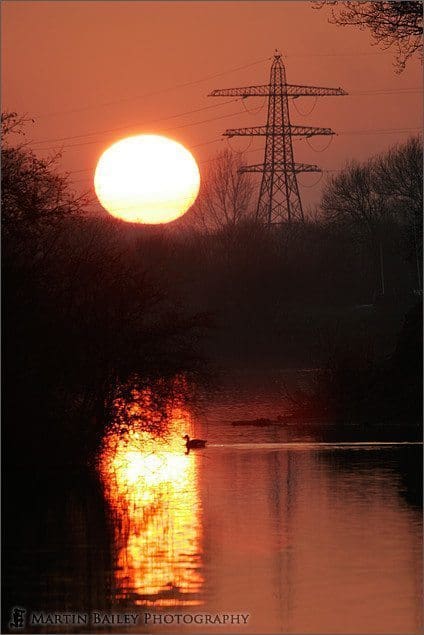 Again, a tight crop, but what I wanted to briefly mention here is that as a predominantly nature photographer, I wondered for just a little while as to whether or not to include this big ugly electrical pylon in the shot. As I peered through the lens at 400mm or 640mm on the 20D, considering my options, I found this composition, with the sun’s large disk next to the pylon, with the duck on the lake helping us to return to nature. Again this helps to display the stark contrast between nature and man’s ugly structures. Also it reiterates my point from Episode 3 about “Seeing Shots”.